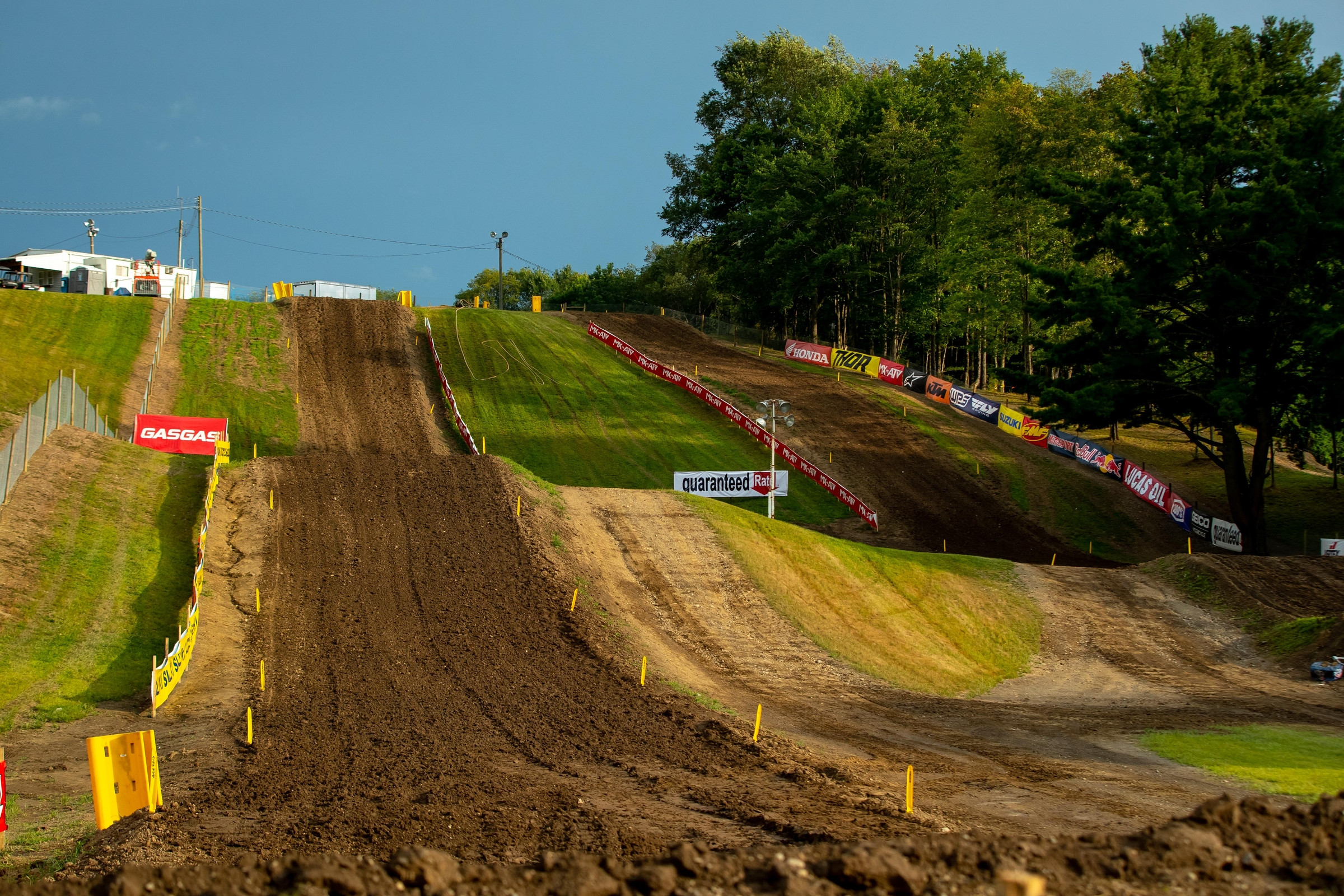 Unadilla MX is a historic track, there are a lot of great things about it and no track, maybe outside of Hangtown, has improved its soil and track conditions as much as Unadilla since I started going to the races in 1996. This year’s track looked brutal. We went through a stage this year where the tracks weren’t ripped as deep as before and the riders were able to move around more. Well, this week’s track was not like that. Soft dirt, and the type of soil that Unadilla has, formed up to be pretty treacherous. Long, deep ruts, the kind where you can see the tops of German soldiers’ heads, were the order of the day. Looked like a real man’s track for sure.

With just four Lucas Oil AMA Pro Motocross Championship races to go, things are getting tighter in the 250MX class while the 450MX class, in my opinion, is pretty well locked and loaded. I didn’t go to Unadilla so I’ll just recap the series and the race in general with some stats that I looked up via my buddy Clinton Fowler that I think encapsulate the race and/or series for the guys.

7: The number of rounds it’s been (11 weeks in total!) between overall wins for THE JETT. I’m sure to Jett Lawrence that felt like 70 rounds but the Aussie kid hadn’t gotten an overall win since round one, and at Unadilla, I’ll be honest, I didn’t think it was coming. Justin Cooper rode away from him in moto one and in moto two, when Cooper got the holeshot and led, I figured we’d see a repeat. The when Jeremy Martin got in front, it seemed set to be a 2-2 day for THE JETT and third overall. But oh no, Lawrence got on the gas and was damn impressive in catching Jeremy and dropping him to get the win. Statement ride by Jett. He got to within four points of Cooper for the points lead. Also, are his starts fixed? Are we sure of this?

1: The number of things that Jeremy Martin said that made me laugh. J-Mart’s a low-key funny dude and is completely out of effs given at this stage of his career also. When he said “the donut guy” got him after the second moto, I laughed out loud.

6: The number of times that Justin Cooper has qualified fastest out of eight races held this summer. When you think of that and then also look at his career stats for fastest qualifier indoors and out, it’s kind of amazing really. Cooper had a terrific first moto and then not so terrific second moto where he went from first to fourth. Afterward he said his bike setup was off for the second moto, which, to me, is a bit odd. Was it perfect? Of course not but an hour earlier, he crushed everyone with the setup he had. I’ve never seen massive changes made to a bike setup after a moto win. Sure, you adjust a couple of clickers here or there to account for the bumps getting bigger, but you need to make absolutely massive changes or you drop back one minute? Not sure I’ve seen that.

17: That’s was Max Vohland’s qualifying position at Unadilla which is right around his average for this year (16th) so you wouldn’t have had an indication that Maximus was due for a breakout ride. But he did—the KTM kid scored a career best fifth overall on the day with a couple of nice rides. Look man, we know this track favors European riders and Max’s dad Tallon of course raced over there forever and Max himself raced one EMX race so OF COURSE Max is good at Unadilla, right? No?

7: Seven spots difference between Garrett Marchbanks average first eight motos of the year (eighth place) to his last eight motos (15th). Not all Marchbanks’ fault, as he’s had some bike issues in there, but a season that started off very promising has slid backwards. He’s got time to turn this train around though.

45: That’s the number of riders who Dilan Schwartz passed in both motos in Unadilla. He fell early in moto one and was pretty much dead last. Got all the way up to 15th and in the second moto was a good 12th place. That was quite a ride for sure. On the PulpMX Show this past Monday, we had a spirited debate with David Vuillemin on who he would sign to a factory 250 ride—Dilan Schwartz or Coty Schock? Both riders have really shined this year.

27: Number of spots lost by Alex Martin in the first moto at Unadilla when he exited with a wrist injury that appears to be serious. This has been the worst year for Troll since the movie Trolls came out and everyone made jokes to him about it. The less said about Troll’s season the better. I’m gonna go cry myself to sleep now.

8: Position of Levi Kitchen at Unadilla which was his “pro” debut. It was a little better than his OTHER “pro” debut at RedBud. Confused? Yeah, me too. Don’t worry though the amateurs will continue to be able to make more money than 75 percent of the pros out there AND get tons of perks while continuing to dab their toes into the deep end of motocross while still racing as amateurs. Okay, now that I got that off my chest, back to Kitchen. He rode well. He didn’t qualify well but improved on that in each moto. When the track was at its worst, he rode his best, which is a good sign. Still, we saw Nate Thrasher and Jarrett Frye come up last year and ride around just inside the top ten but then neither guy has crushed this summer’s nationals (Thrasher got those two SX wins and therefore will continue to get 250 rides for the next 15 years), so is Kitchen good or does he benefit from the bike and team? Stay tuned everyone…

0: The number of points scored by the Troy Lee Designs Red Bull GasGas team at Unadilla. Two of their three riders, Justin Barcia and Michael Mosiman didn’t race due to injuries but they still had Pierce Brown under the tent. But he crashed out of both motos! Man, to go all that way to a race with one of three dudes and then for that dude to get no points is a tough deal. Poor Tyler Keefe. I blame Wil Hahn to be honest. Guy’s a bad luck charm…

1: Number of points earned by Luke, AKA Randy Saltine, AKA El Dozer, Renzland at Unadilla on his 125 two-stroke. The first points scored by a two-stroke since Stank Dog a few years ago. You go El Dozer, you go.

873: Approximate number of times Mitch Payton from Monster Energy/Pro Circuit Kawasaki rubbed his hands through his hair watching his riders on the day. It’s been a tough summer for Payton outside of a few good rides from Jo Shimoda, who on this day hit his hand on a plastic barrell and DNF’d one moto. Austin Forkner continues to confound everyone, and Seth Hammker, while showing speed and overall had a good day, crashed late in moto two and threw away a solid top ten. When Payton is frustrated, he rubs his hands through his hair and for years, he didn’t probably ever do that. In 2021, he’s maybe done it more than ever.

1: Is there any other number needed for Honda’s Ken Roczen when it comes to Unadilla? He was first twice, he was fastest qualifier, he set the fastest lap, he led every lap but three, he got one holeshot, and yeah, he won. Great ride for Roczen and it was a thing of beauty to watch him ride a track that most of us humans would’ve struggled on. What a day for the #94. These are the types of rides you want to bottle up and remember forever. We had Kenny on the PulpMX Show and he was saying he liked Lakewood and Unadilla the most out of the National tracks and hey, what do you know? He went 1-1 at both of those!

39: Dylan Ferrandis’ lead over Roczen in the points with just eight motos to go. With an average finish of 1.8 this summer, I like Dylan’s odds to hold onto this thing. He got second overall at Unadilla and I would argue he was the fourth-best rider but hey, when Aaron Plessinger crashed out of moto one while way in front of Ferrandis, and when Chase Sexton crashes while in second off the start of moto one, then Ferrandis will take the second overall. When it’s your year, it’s your year, man.

.08: The amount in hundreds of a second that Chase Sexton was off of Ken Roczen’s best lap time in the second moto. And Chase was almost a second better than the next guy. So Roczen was THE best guy at Unadilla and Sexton was almost able to go as fast as Roczen so that’s pretty good in my eyes. It appears Sexton will be named to the USA MXDN team this weekend along with Justin Barcia and RJ Hampshire, and I say, good for him. His speed warrants an inclusion.

7: The number of times in a row that Marvin Musquin has made the podium at Unadilla. We didn’t race there last year of course but yeah, Marv’s great at ‘Dilla. This year he’s not shown the same amount of excellence as usual and he went 4-4 for that third overall, but hey man, a streak’s a streak! By the way, with Aaron Plessinger going to Red Bull KTM, there are plenty of rumblings that Marv will be moved over to Rockstar Energy Husqvarna for next year.

2: The number of moto wins that Roczen has more than Ferrandis this year. I know right? Considering the gap in points, it’s surprisingly close on moto wins. That stat sort of snuck up on me. too.

4.4: The average start for Cooper Webb in this class, which is second best out of any rider (Roczen’s the best at 2.7), but he’s currently ninth in the points. Unadilla was a good day for him, but overall it’s been a little sub-standard for Webb. I admire the fight, the effort, and all that, but it’s been a little weird to see Webb get pushed back at a lot of these races.

0: Overalll wins for three-time 450MX champion Eli Tomac this season. He’s got three moto wins, and at four races he had the fastest lap overall, but zippo O/A wins. Yeah, super weird bro, but then again his whole season has been super weird. He’s fixed the first moto issues he’s had but at Unadilla he had a second moto issue where he just couldn’t really do much.

10: Overall position for privateer Coty Schock, who had shown lots of speed at the last two races but had zilch to show for it. But at Unadilla he was great and showed what he’s capable of. Good showing for him and the team.

62: The number of positions that privateer Ryan Surratt has gained this summer, the second most in the class behind Chase Sexton’s 87. Pretty impressive summer for Surratt who’s raced SX, Canadian moto, WORCS, and probably something else I’m missing. [Note: Surratt also practices during the week on two-strokes in order to save his borrowed race bike for the weekends.]

800: The number of points all Yamaha riders have accumulated in the 450MX class this year, which leads all the OEM’s. KTM is next with 772 and what does this mean? Not much unless you’re BLU CRU and your 450 has been hammered on for years as not being that good.

Thanks for reading the column this week people, “we” always appreciate it! Email me at matthes@racerxonline.com if you want to chat about this or anything else. See ya’ at Budds!