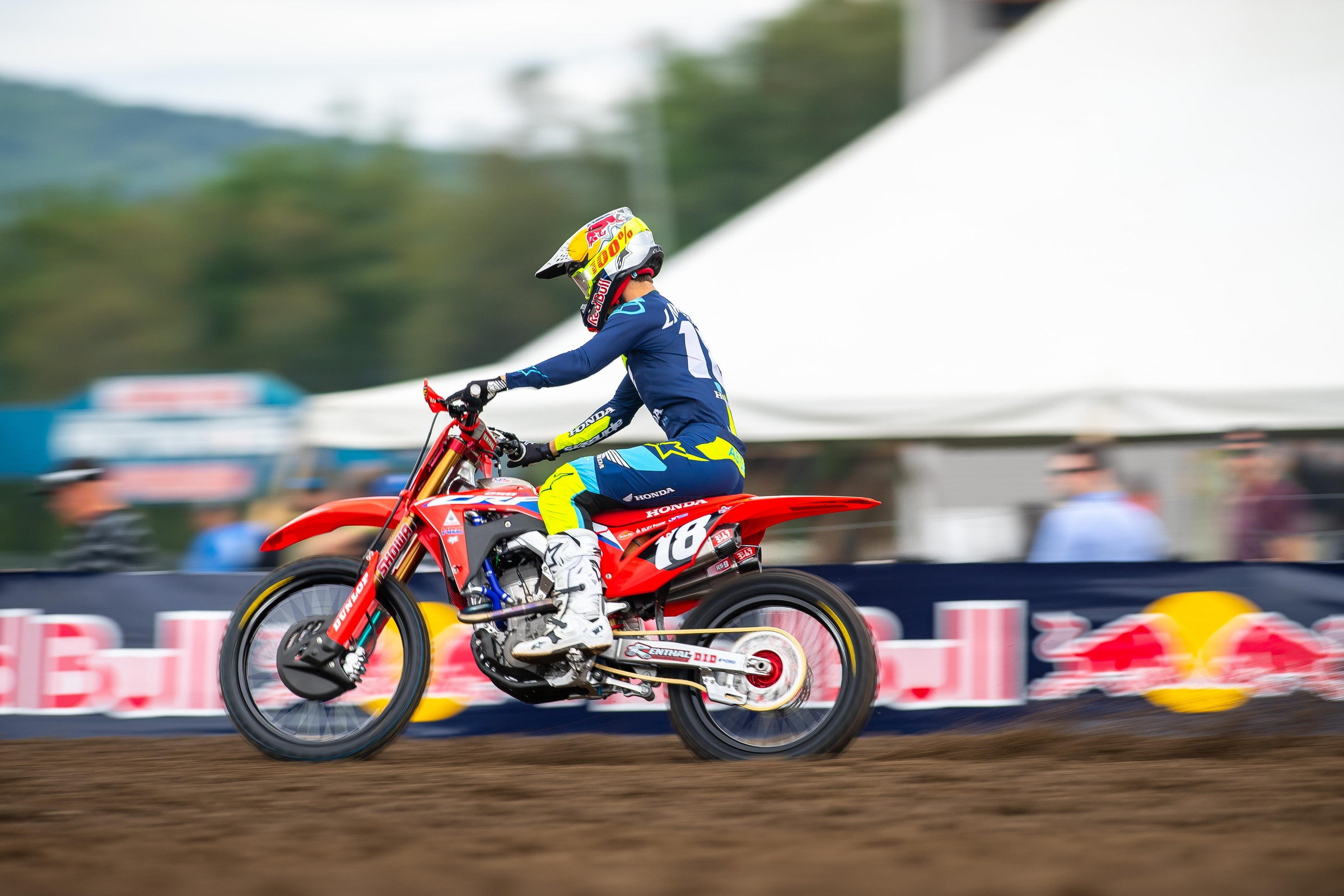 When we last raced in Washougal, Jett Lawrence was about five minutes away from falling into a 19-point hole in the 250 class championship of Lucas Oil Pro Motocross. Justin Cooper had been chipping away at the Australian’s points lead and had just eclipsed him a round earlier at Spring Creek. Cooper was then two laps away from putting 1-2 scores on the board to win the Washougal National when he caught a rut wrong and crashed off the track at high speed. The resulting crash pushed him down to eighth, costing him the overall, and flipping some points back to Jett Lawrence who entered the three-week break suddenly just eight points down of Cooper.

That moment could prove a lot more significant after the Unadilla National today. Cooper won the first moto, but could not match his similar level in the second moto while Jett Lawrence passed not only Cooper but eventually Jeremy Martin to go on and win the overall. Cooper’s struggles continued throughout the moto and he eventually slid down to fourth place. The result halved the championship lead down to just four points for Cooper as Lawrence seems to finally have been able to stop the bleeding.

"I don’t think I was getting down but I was getting frustrated with myself," said Lawrence in the post-race press conference. "I’m supposed to be up there with those guys. But I try to stick with my program with Jonny—just stick to that and that kind of builds my confidence, too, I know that works because he won a lot of championships at the top level himself, and winning with Ricky Carmichael."

It was a result for Lawrence that was exactly what he needed coming off this long break and into the home stretch of the championship.

"Not really, I just stuck to my same program, the program Johnny [O’Mara] gives us is good," Lawrence said in the press conference when asked if he switched up his program during the break. "My starts finally got better over the break, and it just kept me out of trouble. I think it was…it wasn’t that I was not believing in myself, but I had to just visualize it. Visualize the start. I think the last few weeks I was overthinking it."

Lawrence’s early season success trailed off as he averaged a 2.1 moto finish through the first six motos of the year but then averaged 4.7 in the following eight motos. His 2-1 performance at Unadilla came with good starts, measured riding (and avoiding problems around him), and above all, the speed he showed at the beginning of the year.

“I finally got my starts sorted, so that helps a lot,” said Lawrence. “I felt really good out there. I felt like I was at home almost. I had such a good flow and felt so fast. Good to be back up on podium finally. It’s been a while.”

Lawrence’s pass on Cooper to get around the championship leader in the second moto was also a bit of a statement pass as he figured out a line he liked around the outside before the skyshot and quite literally put on the jets to pass Cooper. Whether he felt like Cooper was holding him up or not, he immediately closed the gap down to race leader Martin moments after that pass and wasted little time to take the lead.

Championship-wise, this is basically a reset heading into the final four rounds. Cooper had an opportunity to do exactly what he’s been looking for all year and that’s to go 1-1. He couldn’t convert, and it stings a bit more that it comes at home for the New York native. Unadilla isn’t close to where Cooper grew up, but it is his home state and he had extra motivation to stamp this one off today.

“I felt really good in the first moto, and I think we needed to make a bike change for the second moto,” said Cooper. “The track got a lot rougher in the second one and it was just brutal out there. I lost my flow pretty early and I think we needed to adjust to the track. I was fighting the bike pretty hard and once you lose the flow on this track it’s pretty dangerous.”

If this proves to be a “bad day” for Cooper, it’s a very good bad day. Despite losing over 40 seconds to Lawrence after he went by in the second moto, Cooper’s ability to remain fourth and limit any further damage has helped him retain the points lead. This 250 class championship feels very momentum based though and Lawrence getting his footing underneath him again could be huge over the next couple of rounds.

Either way, we’re in for one heck of a title fight between two riders that seem to get it done in very different ways. Lawrence’s raw speed and flair has always been a talking point but Cooper’s consistent approach, even if he’s not actually trying to be that way, has kept him at the sharp end of the field nearly his whole career. Which strategy will actually work is a guess as good as anyone’s.