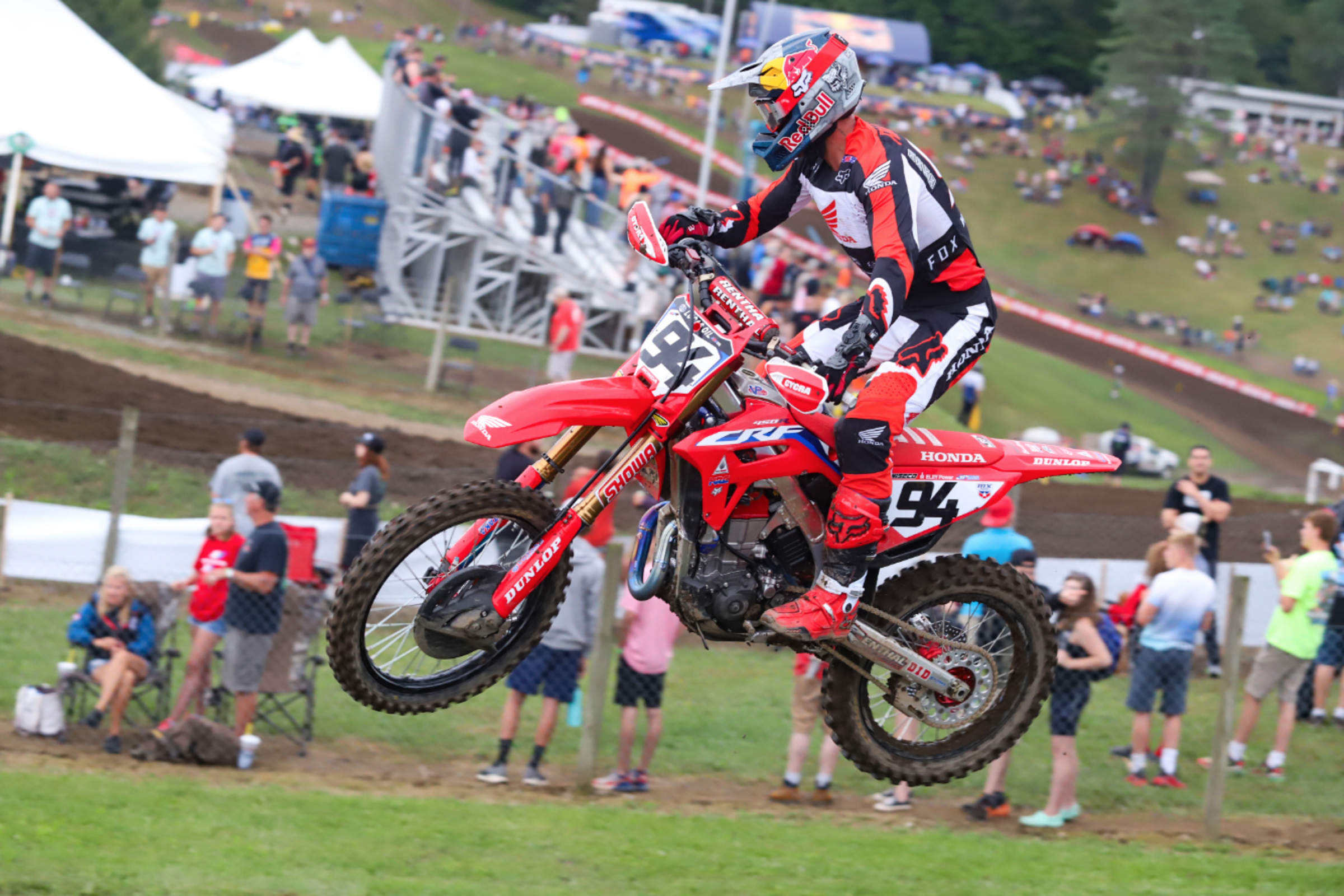 Chase Sexton was frustrated after crashing out of the top five coming over the holeshot line of the first moto. He was slow to get up, but he remounted his beat-up #23 Honda CRF450R and got going, roughly three-fourths of a lap down but charged to 11th. He got redemption off the start of the second moto. Holeshotting the race, then battling his teammate Ken Roczen for the race win was quite the turnaround. His moto win at the Washougal National lit a fire in him after a mid-season slump in results. He had not been near the front of the field after the opening round but he's finding his stride right in time to finish this season strong. Roczen would go onto to take the lead and not look back. Sexton kept Roczen honest throughout the race before coming through only six seconds back, and while the overall result doesn’t look great, he rode extremely well today.

Speaking of riding well, Roczen has now excelled the last two times he has been here. In 2019, he topped qualifying by almost three whole seconds before going onto to go 1-1 on the 50th anniversary of Unadilla MX. He sits on four straight moto wins here in what is becoming his house. His smooth and tamed riding style is on full display as he gets in and out of the long, deep ruts.

Webb started off right behind Roczen and Sexton with Ferrandis and Musquin behind him. Ferrandis went around the outside of Webb and then Musquin followed his fellow Frenchman around the #2 as well. The top five would remain until the checkered flag as Christian Craig and Eli Tomac charged to sixth and seventh. Dean Wilson snuck into eighth ahead of Max Anstie, who had a solid day of his own, and Coty Schock, who finished tenth. Right outside the top ten was privateer Ryan Surratt. A handful of other privateers had great rides in the moto, including Chris Canning (13th), Tyler Stepek (14th), Ben LaMay (15th), Jeremy Hand (16th), and Jacob Runkles (18th). Hand found himself running inside the top ten in the first moto so he has to be pumped on his day.

Roczen’s 1-1 gives him the overall as Ferrandis’ 2-3 gives him second overall ahead of Musquin’s 4-4. Tomac (3-7) and Sexton (11-2) rounded out the overall top five. A perfect 50-point day coupled with Ferrandis' results allowed the Honda HRC rider to gain eight points on the Monster Energy/Star Yamaha Racing #14, who now sits with a 39-point advantage over Roczen in the standings through eight rounds.

The gate dropped on the final moto of the day and once again, Cooper holeshot ahead of Jeremy Martin and Jett Lawrence. Martin wasted no time getting into the lead on the second lap. The trio stayed tight as RJ Hampshire again ran right behind them. Jett Lawrence moved into second as Martin clicked off a few laps before the #18 struck a move. Going over the Sky Shot jump, Lawrence swung wide and then cleared the jump as Martin came up slightly short. Martin took to the inside of the next turn, going over the roller, as Lawrence swung wide making the pass stick as he then had the inside. Hampshire got around Cooper for third as Seth Hammaker and Preston Kilroy ran in the fifth and sixth positions. Kilroy eventually finished in a new career-best tenth in his sixth moto of the youngster’s pro career. Levi Kitchen got around his teammate Jarrett Frye and then started to go at Max Vohland for sixth. Kitchen would not only get the position, but he would move to fifth when a mistake from Hammaker caused the Kawasaki rider to drop back to the middle of the field. Hammaker recorded 21st in the moto. Forkner, who did not finish the first moto, put in a solid ride. Late in the race, Vohland got back around Kitchen and Forkner followed through, bumping the #147 to seventh. Props to Dilan Schwartz, who came around the first time in dead last but was making passes left and right and charged up to finish 12th. Pierce Brown had another tough blow as he went down hard on the second lap. He was helped off the track by the medical crew. And bummer for Jo Shimoda, who came through the pack after a first-turn crash, only to clip his hand/wrist/elbow on the inside of a track marker, which ended his moto after 11 laps. He had been battling with Jalek Swoll for 12th until he just completed the pass only to clip his arm.

Jett’s 2-1 gave him the overall ahead of Cooper’s 1-4, which just edged out Martin’s 3-2. As it was for Roczen, the win was big for Lawrence, who had not won an overall since the opening round. Cooper now has a four-point advantage over Lawrence in the standings through eight rounds.