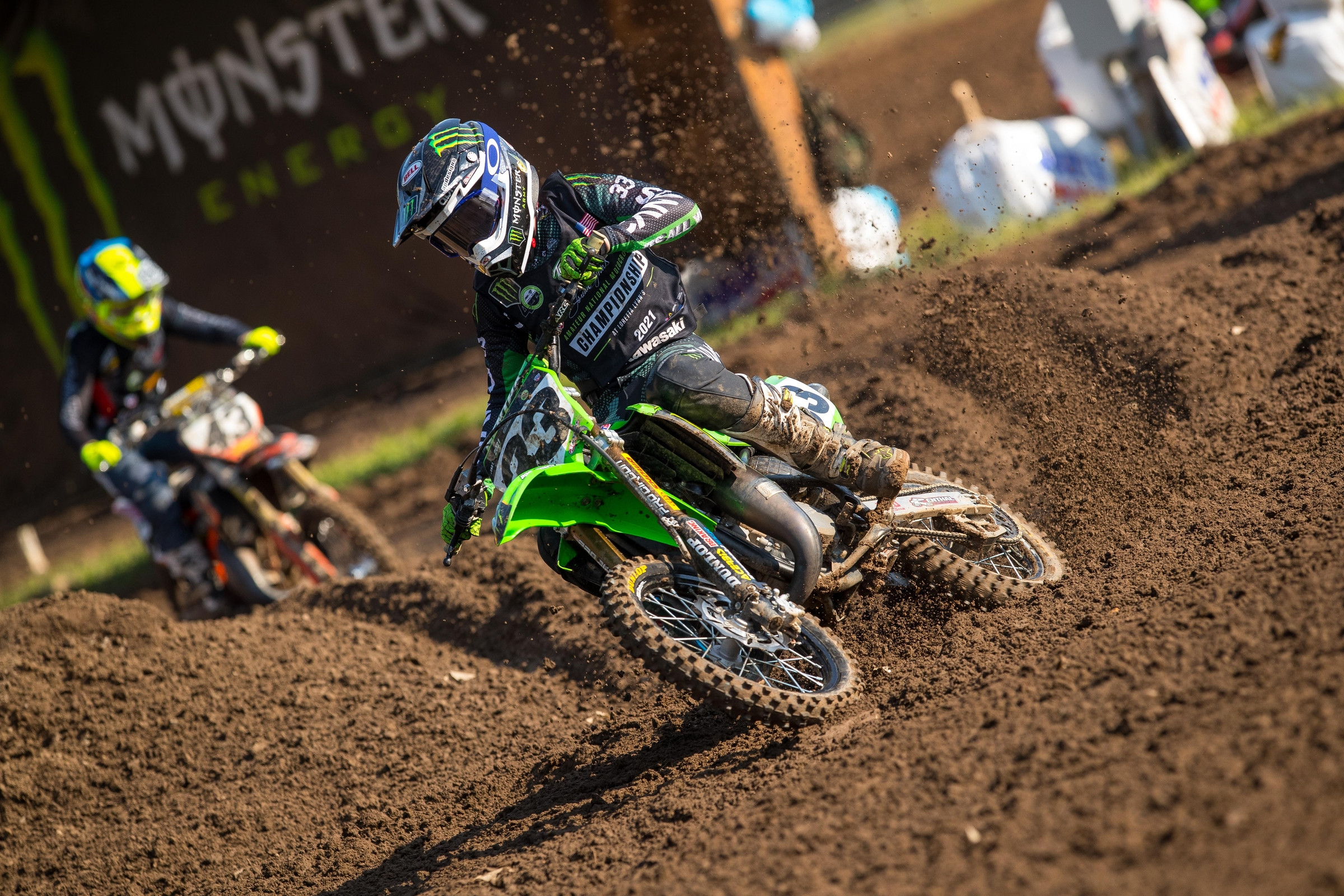 After being relatively unknown prior to August 4, 2020, (the first 250 B Limited moto of the week), Kitchen came into this week with a ton of hype surrounding him as a favorite in both the 250 Pro Sport and the Open Pro Sport—but it did not come easy for him. He won the first 250 Pro Sport by over 15 second ahead of Suzuki’s’ Preston Kilroy and Kawasaki’s Chance Hymas, but he was docked two positions for jumping on a red flag. Eventually, he won the second moto and finished second in the third moto—after crashing while chasing Hymas and dropping outside of the top 15—to claim the overall ahead of Hymas and Kilroy.

In the Open Pro Sport class, Kilroy struck first, holsehotting and leading the entire moto ahead of Hymas as Kitchen fought through the pack to finish third. In the second moto, Kitchen claimed the win and the trio were all tied with four apiece heading into the final moto in a winner-takes-all scenario. Hymas struck first, stealing the lead away from holeshotter Luke Kalaitzian as Kilroy moved into second and Kitchen was battling for a spot in the top five. Right when it appeared the clear air would give Hymas the race and overall win, he coughed it up when he went down. Kilroy inherited the lead, and it then became his title to win or lose. He started to build a lead of his own as Kitchen had gotten up to second place. Then Kitchen attempted to pass Kilroy but was unable to successfully pull it off. Suddenly, Kilroy stalled his Suzuki, handing over the lead and title to Kitchen as he struggled to restart his RM-Z250. Kilroy dropped to tenth and Hymas charged up to second as Kitchen claimed the win and title. afterwards, at the awards ceremony, Kitchen received the 2021 Nicky Hayden AMA Amateur Motocross Horizon Award. He will now move to the professionals ranks full-time with the Monster Energy/Star Yamaha Racing team.

“Man, what a week in Tennessee! I’m very happy to leave Loretta’s with both championships and also get the Horizon Award,” Kitchen said in a team press release. "I had a few come from behind rides that I was very proud of and I know it will only help me heading into the Pro Motocross National this weekend at Unadilla.”

Amateur Rider of the Year

Romano claimed three moto wins en route to the 250 B title, holding off Gavin Towers (Kawasaki), Gage Linville (Yamaha), and Preston Boespflug (Honda). Linville gave Romano a run for his money in the first moto of the weekend, in what was an awesome battle back and forth for the lead, with Romano eventually winning. Towers had the lead late in the final moto but Romano mounted a run that landed him a perfect three-moto sweep.

In the Schoolboy 2 (12-17) B/C class, Romano entered with 1-1 moto finishes. He found himself buried off the start as he worked his way through the field. He made his way up to fifth before an issue dropped him back to eighth and out of position for the overall win. Although Romano fell short of the Schoolboy 2 (12-17) B/C title, he claimed five out of six moto wins and the Amateur Rider of the Year award so he cannot be too disappointed with his week.

“It was a great week at Loretta’s,” said Romano in a statement from Yamaha. “Five moto wins out of six and winning the 250B was pretty awesome. I’m also happy to be named the AMA Amateur Rider of the Year. It’s a great achievement with all of the riders out there.”

Once again, as Jason Weigandt pointed out, the Monster Energy/Star Yamaha Racing team currently has the top two pro riders at the moment (Dylan Ferrandis leading the 450 Class standings and Justin Cooper leading the 250 Class standings), the top amateur-turning-pro prospect in Kitchen, and the next up-and-coming A rider in Romano.

Youth Rider of the Year

Adams claimed all three race wins in the 85cc (10-12) class and then finished 3-2-2 in the Mini Sr 1 (12-14) class to claim the overall. The win in the 85cc (10-12) class was big for the Team Green Kawasaki rider after his run in 2020 in the class ended before it really got started. A DNF in the first moto was followed by a fourth and a first but landed him 12th overall. In his third year in the class, Adams came through with the win.

In the Mini Sr 1 (12-14) class, Adams did not claim a race win, but he stayed consistent and avoided the lows, which gave him the overall. First race winner Landen Gordon had issues in the second moto, finishing 11th, before claiming the win in moto three. Gordon’s 1-11-1 earned him third overall. It was an impressive overall by Adams to show his composure, even as one of the younger riders in the class. Kitchen, Adams, and Husqvarna’s Evan Ferry (125cc (12-17) B/C and Schoolboy 1 (12-17) B/C) were the only three riders to claim wins in both of their classes at the Ranch this year.

Vet Rider of the Year

Peterson claimed the first Vet (30+) class moto win on an all-white Honda CRF450R and then the Honda crew went to him with a red fender to help him earn some contingency money! Peterson then claimed the second moto win and finished second in the third moto to claim the Vet (30+) class overall.

Peterson finished tenth in the fast Junior (25+) class, which was won by Honda’s Heath Harrison. While riders such as Mike Brown going 1-1-1 in the Senior (45+) class or Keith Johnson finishing 2-1-1 in the Masters (50+) class, the award was given to Peterson, who represents the typical weekend warrior type racer compared to an older, experienced veteran who is returning to the ranch.