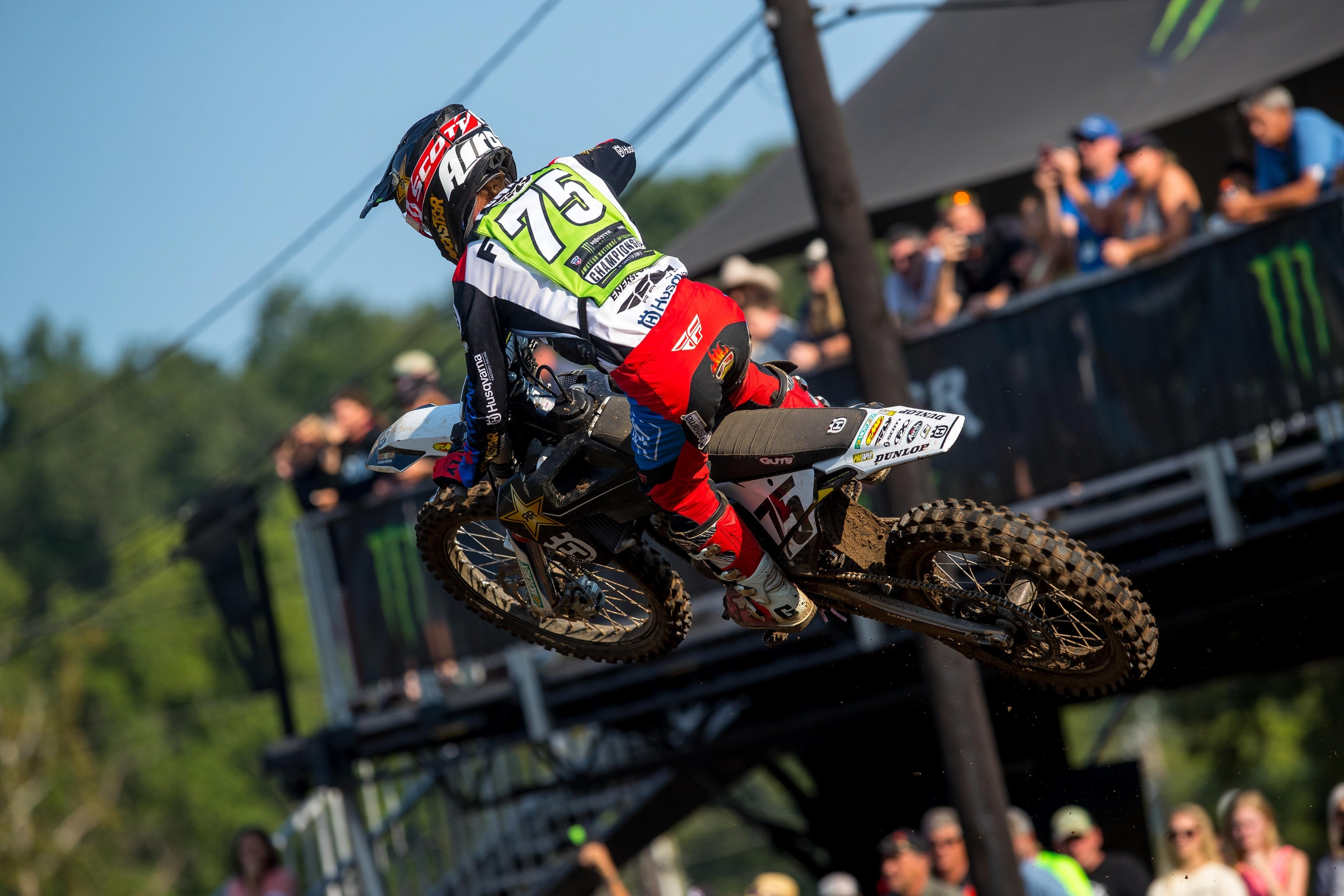 It’s impossible to unpack every story from every class at the Monster Energy AMA Amateur National Motocross Championship at Loretta Lynn’s Ranch. It would take 15,000 words, minimum, to make sure we showered enough praise on every great rider, and avoid all the angry “why didn’t you mention my kid!?” emails from the crazy amateur parents out there.

Do you want to really want to read 15,000 words? How about 1,500? If you’re mostly a fan of pro racing and you want an idea of what’s coming and who proved themselves, here’s the info in the best possible way we can put it.

Kitchen Won: Levi Kitchen came into Loretta’s as the most-hyped of this year’s graduation pack, and he lived up to it by winning both 250 and Open Pro Sport, and collecting the AMA Nicky Hayden Amateur Horizon Award. He didn’t dominate, though, as Preston Kilroy and Chance Hymas gave him all he could handle in both classes. In the end, Kitchen was the best of the group, and he proved that by coming through the pack often and turning in burner lap times. In the final Open Pro Sport moto, Hymas and Kilroy had their shots at the win, but both made mistakes, while Kitchen stayed cool and error free. He’s the best of this year’s bunch, and the pro transition will be simple since he’s already riding for Monster Energy/Star Yamaha Racing. Do not be surprised if Levi throws in a killer result or two before the Lucas Oil AMA Pro Motocross Championship is over.

Chance’s Ceiling: Chance Hymas, at 16, is four years younger than Kitchen and has given him fits in A class battles all year. He came up short of the titles this year, but man was he close. Because of his age, his ceiling might be the highest of anyone in the group, but also because of his age, no one is yet sure what his pro timeline will be. The hot rumor is that Hymas is switching from Kawasaki Team Green to Honda HRC to become the next in line behind the Lawrence brothers. The real question is, will he be back for Loretta’s next year or will he turn pro at the 2022 Pro Motocross opener?

Does The Age Thing Mean Kitchen Actually Isn’t That Good?: It does not. In the minicycles ranks one year of age is a massive jump—a 12-year-old racing a 13-year-old is big. Once riders are past that 16-17 age range, you’re looking at more of a difference in experience, riding time or program more than anything. A few years ago, Justin Cooper dominated Loretta’s but was considered old as an A rider. He’s gone on to a great pro career. In J-Coop’s case, he needed to start riding and training full time to show his true potential, but he didn’t get the chance until he graduated high school. Kitchen says he didn’t really ride and train full time until 2019. These guys had the talent to do big things at a younger age, they just didn’t have the opportunity.

Stop Being Surprised By Suzuki: Over the last few years, Dilan Schwartz and Preston Kilroy would win Loretta’s motos and contend for titles and everyone was shocked. They’re riding Suzukis! Now Swartz is logging great motos as a pro and Kilroy was in the running for the Horizon Award, winning multiple motos at the top level during the week. We need stop being surprised. The Bar-X/Chaparral/Ecstar Suzuki team is just legitimately good.

Who Has Next?: The next group down from Pro Sport is B. Nicholas Romano is the best B rider in the country as of today, he won five of his six motos in the toughest B classes: 250 B and Schoolboy 2 (and won the Amateur Rider of the Year award). He blew a second title with crashes in his final moto of the week, but he proved himself, regardless. Romano rides for Star Racing. Like Kitchen. And Justin Cooper. And Dylan Ferrandis. This is Star Racing’s world and we’re just living in it.

Don’t Forget: Ah but this entire story could look much different. Kawasaki Team Green has a lot of hopes riding on Ryder Difrancesco, but he broke his femur earlier this year and was unable to make his Loretta’s qualifiers (he’s back on the bike now). Team Green’s rough week is taking a lot of the headline space from this event—Hymas is leaving and former super-prodigy Jett Reynolds struggled again and broke his collarbone. If Ryder D was there winning, Kawasaki’s future would look much different. Surely Romano and Star would have been glad to take on that challenge, but the point here is that the amateur landscape could or will or may look different depending on Ryder D’s return, how fast he goes, and what classes he races next year.

Similarly, Star has yet another strong prospect in Matt LeBlanc, who could have been right there with Kitchen this year. He was out hurt as well.

Was There a Breakout B Rider?: Coming into this year’s event I kept saying to keep an eye out for a surprise in the B class. As Kitchen and Hymas did last year, some kids go next level in this class (once they’re on big bikes). The B class is where Trey Canard busted out, where Eli Tomac went next level, where Shane McElrath got discovered, where Aaron Plessinger found his groove. We didn’t really see that this year, although Caden Braswell did steal the title that Romano blew in the final moto. Good for Braswell, who had some speed throughout the week, but he only won one moto. It wasn’t quite a game-changer performance, but that kinda thing doesn’t happen every year.

the 125 Class: Attention in the pits! Attention in the pits! Because not every manufacturer makes a 125, not every top rider will race the 125 classes, (Schoolboy 1 and 125 B/C). Hence, anyone who wins 125 titles will be accused of sand bagging and ducking the competition. That’s the tag that Max Vohland got last year (Max won 125 titles instead of racing guys like Hymas, Kitchen, Reynolds, or Romano in B on a 250F) and now that’s what Evan Ferry will have to hear. Actually, he likely won’t be listening to that because these 125 titles are Evan’s first two titles at the Ranch, so he’s stoked no matter what. Look, we’ve seen far too many riders lose their footing in the transition from minicycles to 250Fs. That’s part of the reason we see so many surprises in the B class. If a rider wants to take an extra year in between—either by stuffing himself on a supermini (which Haiden Deegan did) or racing a 125 (which Ferry did)—I think it would be foolish to question it. Max Vohland didn’t plan to duck everyone forever, his plan was to come back for more amateur years but KTM had a pro opening and he took it. Heck, Max was even going to race the EMX125 series in Europe before COVID-19 messed that up. The dude isn’t afraid to do some racing.

Ferry will be in the B class next year, dealing with the usual thick pack of talent there. Yes, there will be Star Racing YZ250Fs and Team Green riders in B, which you don’t see in the 125s. Is the goal to battle the best every time or try to build the best long-term plan for success as a professional? Remember, Kitchen and J-Coop are proving an extra year or two as an amateur doesn’t hurt.

Okay, rant over. Ferry’s comp was expected to come from Mark Fineis, and it sure did. This rivalry boiled over during a third moto winner-take-all showdown where Ferry either A) hit a dirt clod accidentally off the start and took Fineis out or B) just took Finies out, on purpose. Depends on what side you’re on. Fineis is also very fast and has KTM support, these two should provide more fireworks when they move to the 250Fs.

How Do the Mini Classes Work:? Here’s how it works: you have 50s, 65s, 85s and Superminis, which are for 85-style bikes with larger wheels and punched out (112cc) engines. I’ve heard some people say these minicycle titles look like participation trophies, because it looks like there are so many classes that everyone has a shot at a trophy. In reality, all these age ranges are carefully planned around the various growth sizes of a rider. Some kids can still fit on 65s at age 11. Some kids, like Kawasaki’s Drew Adams, are on the verge of outgrowing an 85 by age 12. Some 15 year olds, like Deegan, can still fit on a Supermini. Some kids have to race full sized bikes by then.

Anyway, Deegan was very fast, as expected, on the Supermini, but he crashed out of one class, and won a title in another. You can see that other kids are super motivated to beat him, though. Casey Cochran had the speed but crashed out. Noah Viney gave Deegan fits trying to hold him off at times, which he nearly did in one moto and then actually did in another. As is often the case in minis, everyone knows who the big name is, and everyone else is going to ride their heart out to beat that big name.

I used to say that everyone met in the old 85 (12-13) class but unfortunately those age ranges have changed to accommodate Honda’s CRF150 four stroke, which no one even races at the top level anyway (I saw zero raced at Loretta’s this year). Still, the age ranges lead to different riders in different classes. Usually everyone meets back up in the B class. In 2020, riders like Kitchen, Romano, and Hymas really ran strong as B riders. That carried them to great 2021 seasons. Who will be the next to bust out?