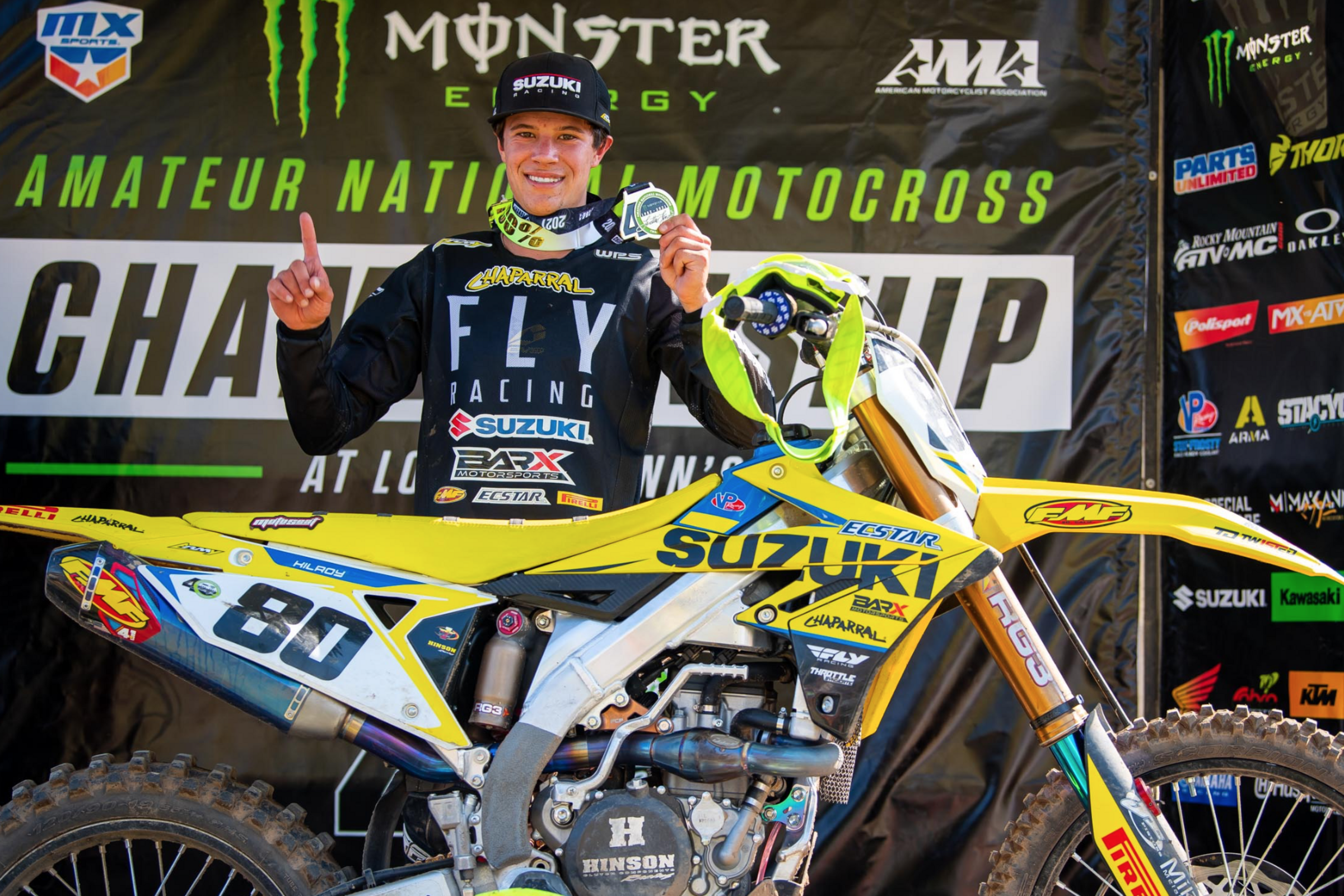 The second day of racing for the 40th annual Monster Energy AMA Amateur National Motocross Championship at Loretta Lynn’s Ranch is in the books. Here are some key takeaways from Wednesday.

The Ex-Pro Showdown: So many stories in 45 plus, staring with Mike Brown’s domination, from start to finish. Jeff Emig, again on a 150 two-stroke, had a huge battle for second, but this time Keith Johnson gets the better of Emig. Then comes the battle of death between Barry Carsten and Kevin Walker… and Ryan Hughes…who is riding a 1986 CR250R! Walker and Carsten scrap the whole way, with Ryno trying to find a way by both, and on the last lap he does, passing both (fellow) vets to net fourth on the 1986!

The Other B Class: Schoolboy 2 might not have the official B class designation, but it usually has the same talent as the 250 B class, which means it’s a big deal. Nick Romano is making early strides toward being named this year’s top B rider, as he captures this moto win. It wasn’t easy. Preston Boespflug got the holeshot and went down, Romano ended up with the lead, crashed, and had to get back around Daxton Bennick to net the win. Bennick and Talon Hawkins rounded out the podium. So far, Romano has two wins against the similar fields—one in the 250 B and one in this Schoolboy 2 (12-17) B/C class—will another rider step up and steal a moto win from Romano or will the Monster Energy/Star Yamaha Racing rider keep the ball rolling?

RM-Army Rations: The highly-watched Pro Sport class motos are looking good for, yes, Suzuki. Yesterday, Bar-X Suzuki’s Preston Kilroy was awarded the first 250 Pro Sport moto one win after Levi Kitchen (who won the moto by over 14 seconds) was penalized two spots for jumping on a red cross flag. Kitchen struck back to win the second moto in that class. However, Kilroy will be a factor in Open Pro Sport as well, getting out front early and holding off a hard charge from Team Green’s Chance Hymas to net the moto win—this time without the help of a penalty. Kitchen had the bad gate pick and made some early mistakes but came through for third. Kilroy has been impressive early in the week, especially holding off Hymas, who got a much better start this moto, for the entirety of the race. The #80 Suzuki rider is positioned to make a possible run at both championships.

The Drama:Yesterday we hyped the Supermini rivalry between Haiden Deegan and Casey Cochran. Well, things changed completely in today’s first moto of Supermini 2. Cochran holeshot but then washes the front and crashes. Gets up, crashes again. That’s it for him, he doesn’t finish the moto and apparently suffered injuries in the second crash that resulted in a trip to the hospital. Deegan starts horribly and has to come all the way back to snag a podium. He battles past Krystian Janik and after a game of cat and mouse, Deegan accidentally downshifts on the takeoff to a jump, comes up short, and gets landed on. He DNFs the moto. Out front, Enzo Temmerman took the race win ahead of Janik, Adler Caudle, and Noah Viney. However, after the race, both Temmerman and Janik were penalized two positions apiece, bumping Temmerman to third and Janik to fourth, and officially moving Caudle and Viney into the 1-2 positions, giving Caudle his first ever moto win at the Ranch. After the race, Deegan posted the following video update, explaining he downshifted going up to the face of the jump where he and Janik collided. The KTM rider said he is banged up and bruised but otherwise uninjured.

Unfortunate news for Cochran as his mom posted the following update on Facebook. Bummer for the #66.