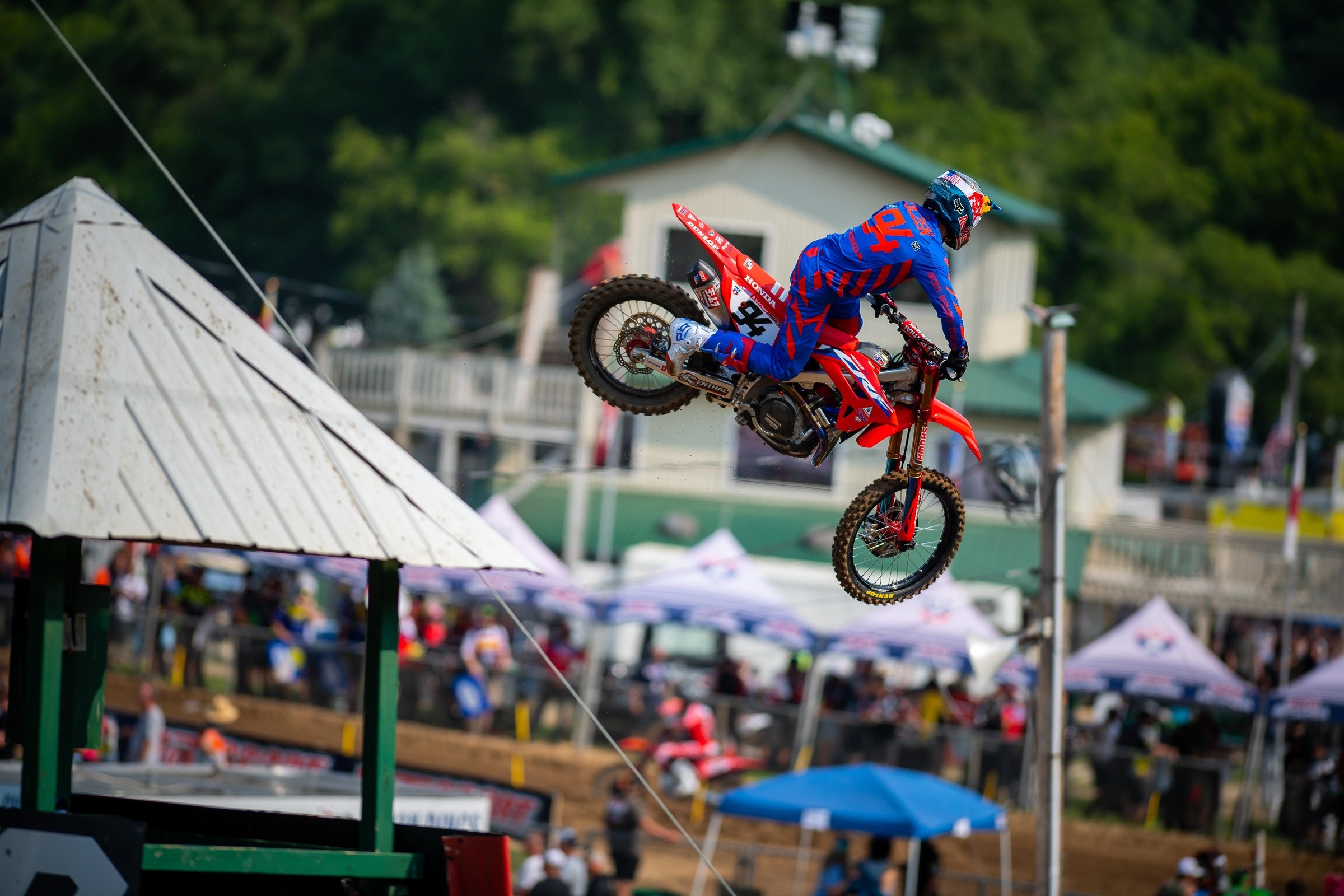 Between "I feel like a train ran over me."

Honda HRC's Ken Roczen came into the Circle K Spring Creek National facing a 19-point deficit in 450 points compared to series leader Dylan Ferrandis. His title hopes turned much bleaker when he got caught in a first-turn crash at Spring Creek, which left him battered and out of the first moto. Miraculously, he returned to win moto two and get a few points back. With 40-1 finishes, he now sits 32 points behind Ferrandis in the standings.

But how was he able to bounce back so quickly? Ken spoke with the media in the post-race press conference.

Ken, you minimized that damage in the second moto. Talk about your day. How were you feeling? How is your body feeing? What went into just getting through this day and pulling out that second moto win?
Obviously the first moto was really tough. I had a good start, but I think we got pushed all from the inside and I ended up going down and I was pretty far up front. A couple people just absolutely clobbered me, so I definitely had to catch my breath. It was just my ribs. I have super solid tire marks on the side right there. My ribs were hurting pretty good, so I had to really make sure that everything was fine. Obviously by that time, they pretty much almost did an entire lap. I think my bike was pretty mangled, too. My complete header was crushed, so, I couldn’t continue anyway. I went to the medical rig real quick just to make sure that nothing’s cracked or whatever. Obviously, I was sore. I just put all my energy then into the second moto. I struggled this weekend just because I’ve been sick. Just had a sore throat a couple days ago and it all went into my sinuses, so I in general didn’t feel that hot. Now after the racing, it’s definitely hitting me right now. So, it wasn’t the ideal day, but we got at least one moto won.

You didn’t see the track in moto one. You seemed to adapt pretty quickly and get back up to speed, considering there had been a full 450 moto and then the 250 class as well.
Yeah. I think that was probably one of the negative things, just me pretty much from second practice on skipping the entire first half of the day and just jumping into the second moto. At the same time, we’ve all been racing for quite a long time and I was just ready to go for the second moto and the parade lap, just keeping eyes open and tried to adapt quick. I think that’s just something that a rider needs in general. So, I just had to adapt really quick. That was probably one of the negative parts, having to find my groove and stuff a little bit. But, we made it work and we made it happen. Also the start, with 40th gate pick I actually got pretty lucky to get a gate in there. Most of the ruts were not that great in general, so I was pretty satisfied with what I had. Mine was a little weird after the gate, but at the same time, it’s kind of funny too because Justin Brayton actually sent me the start that he filmed and out of all forty riders I was in-between Savatgy and Marvin, and those two got literally some of the best starts in the second moto, and I was in the middle. My start was actually pretty good, but those were just so much better so I had to hit the brakes kind of early. I snuck around the inside and made it work.

Ken, describe the pass for the lead in the second moto on Barcia. We’ve seen a lot of guys attempt the outside, and even if you make the pass it’s usually close. But you made up a lot of ground there and it wasn’t even close by the exit of the corner. Just talk about that first lap.
Yeah. I saw him going through the inside and I knew that the outside there was freshly prepped, so I just right away committed to the outside and it was pretty much a perfect berm, and made it happen right there. I was happy to see that line was open and I could finally for once, lately anyway, have a clear track after that.

Kenny, can you talk a little bit about the emotions and what you’re internalizing or feeling in that first moto when you were hit and you were on the ground and there were riders coming right on top of you? It didn’t seem like you would be able to bounce back, let alone win a second moto. Is it just the image that is more striking on the TV, or do you have lungs of steel?
I think it’s a little bit of that German oak tree in me. No, I’m kidding. It was no joke being there. I got hit hard. I’m honestly very surprised that I didn’t crack my ribs or something like that because I sure feel like a train ran over me. But I was pretty calm. I was just laying on the ground there and as soon as I touched the ground, my helmet, I slammed in the ground so hard that everything was kind of sideways and crooked so I couldn’t really see anyway. So then afterward, I was face-down just trying to catch my breath and waiting for that initial pain and just the situation to kind of settle down a little bit because I knew it was pretty bad. But then at the same time, I was just kind of calm. I just did slow movements because I had a charley horse on my quad as well, right above where the knee brace is. So then, I kind of was just moving super slow. Maybe it’s also just being somewhat of a veteran also in the sport, I just stayed pretty calm. We went back to the Alpinestar medical crew. As soon as I kind of just moved around and I felt no sharp pain… We kind of know when a bone is cracked or broken or whatever. It sucked obviously, but that’s just part of the game sometimes. It can happen real quick to anybody else in the rest of the season as well. I made up my mind right away that as long as there’s nothing really bad, that I was going to go out and race the second moto. I just popped a couple of Advil and went back out there. I tried to pretty much pretend going into the second moto like nothing happened, as much as I could anyway.

Kenny, could you talk us through how the crash unfolded from your perspective? It seemed like maybe there was a little bumping with AC [Cianciarulo], but then you kind of just folded into the dust a little bit and we couldn’t tell.
So, I got out of the gate really good. Went down the straightaway and I wheelied just a little bit, so I hooked my clutch for the split second. But in general, I know Justin had a really good start so he came in from the outside. There was a Yamaha on the inside as well. I kind of got sandwiched a little bit. So, I hit my brakes and I was in a pretty safe spot, I thought, but I saw a green fender on the inside and Adam said he kind of got pushed from the inside as well. As we were kind of in the turn, I don't think we were locking bars but something made me almost like a magnet, I was just being pulled down straight into the ground. Then as soon as I was into the ground, I kind of just closed my eyes and things obviously happened really quick. I felt it clobbering me, obviously, and felt a really big hit. Then it was already done. It was kind of unexpected because things like that normally happen when you’re a little bit mid-pack and you start locking bars and stuff like that. So, it was kind of unexpected. I don’t really like the start straight and the way we all funnel into that fast right-hander, to be honest. That was the end of that, really.

Ken, once you were out front for a few laps, did you think at all there was going to be a drop in pace with how you were physically, or was the adrenaline flowing and you were good to go?
No, I was pretty solid and the adrenaline was flowing, to be honest. I didn’t really think about it that much. During the parade lap, I could definitely just feel the – I don't want to call it meat, but you know when stuff wiggles around. I was actually really surprised on my ribs that there was no sharper pain seat-bouncing or things like that, so that was actually pretty solid. But my triceps in my right arm and definitely my lat and everything that was hit, I could just feel the inflammation wiggle a little bit. It wasn’t bad enough internally really for it to take my breath away or anything like that, so I was actually pretty pumped on that. It pretty much was just charley horses all around. I got pretty lucky because obviously the hit was just, when you go down in kind of the front of the pack on the start turn like that and you get hit like that, I was a little scared at first obviously with some broken ribs, but the adrenaline definitely does its magic, too.