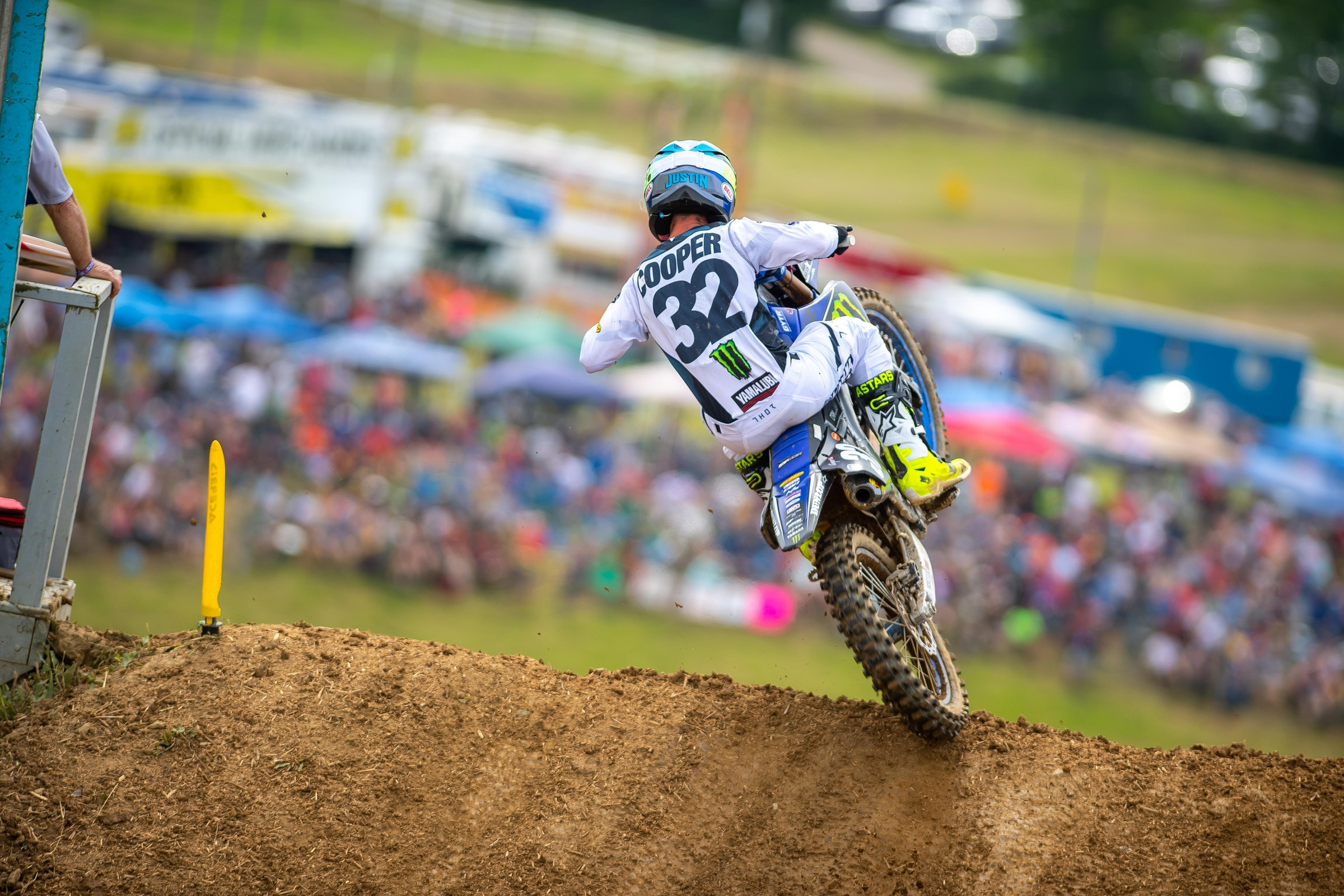 The Conversation Justin Cooper Gets Better

After taking possession of the 2021 AMA 250SX West Region Supercross title, Justin Cooper showed up behind the starting gate of the Lucas Oil AMA Pro Motocross Championship bound and determined to begin a march towards yet another championship. The kickoff Pala round at Fox Raceway in Southern California over Memorial Day Weekend brought 5-3 moto scores for third overall, while Thunder Valley in Colorado produced double moto runner-up finishes for the overall victory. After a week break, Cooper then raced his Monster Energy/Star Yamaha Racing YZ250F to 5-1 moto scores for third overall at the High Point National in Pennsylvania, thus positioning him second in 250 Class championship points, a mere 11 markers adrift of classification leader Jett Lawrence.

With his first moto win of the season now under his belt, Justin Cooper will leave his current home base in Florida behind and head north to 13638 North Red Bud Trail in pastoral Buchanan, Michigan, for this Saturday’s RedBud National. Round four of the ’21 Lucas Oil Pro Motocross 250 Class title brawl, New York’s Cooper is in it to win it. A lifelong goal in claiming an AMA Supercross Championship now achieved, it’s time to go after the outdoor red plate and that’s what he’ll do on Saturday before the thousands of Midwest fans who will motor into RedBud to hang off the fences to root for their favorite racers. Justin took a quick break from packing up his gear bag to talk with us about his mid-summer title scheme.

Racer X: Justin, thanks for taking the time to get us up to speed on the reality of your current surroundings. Just what are you up to this Tuesday afternoon?
Justin Cooper: Just hanging out. We’re in Florida now, so just doing a little bit of training here and just getting used to this East Coast dirt. We also upped the training a little bit. I don’t really like these breaks because we do have to train a little bit harder! So it’s nice to keep going racing. It makes the weeks a little bit easier. But with a week we off, we get to train a little bit harder and take some time off to just do some stuff that we like.

When you get these breaks in the schedule, what do you like to do to have a little fun? Do you watch TV or go golfing or do anything like that?
I’m actually going golfing in the morning! I’ll also catch up on the Grand Prix racing and maybe Formula 1. It’s always fun to see what is going on with the European racing. It’s also fun to follow Formula 1 and see how those races went. Other than that, it’s golfing. I’ve just been getting into that and it’s fun. Other than that, I just like the racing, in general.

Are you any good at golf?
I’ve only been playing for two months! I’m a little bit new on the sticks! I want to try and get a little bit better with it.

Okay, as far as the Lucas Oil Pro Motocross Championship goes, I wanted to ask you if it took you a little bit of time to get going after coming off such a high of winning your first supercross title. Beginning with Pala, were you fully prepared to go after another championship, or did you have to first warm into things a bit?
Honestly, I really had to warm into it, but it wasn’t really a choice. It just felt sort of hard to get back into that fierce racing attitude because you work your whole life to be a champion at this level and I finally achieved that and it was like all of the stress got taken off of my shoulders and I was just trying to enjoy the moment in the weeks afterward and leading up to the nationals. I tried my best to almost not celebrate the championship because I really wanted to be ready for the outdoor series but it was hard. I did the best I could. I just didn’t have that fire, I feel. At least I didn’t in the first race of the series. It was kind of like a harsh welcome back once we got racing again and I really had to refuel the fire.

I was out at Pala and watched both your 250 Class motos in going 5-3 for third overall. However, in the motocross media during the ensuing 48 hours, I thought you sounded a little down on yourself regarding your Pala performance.
Yeah, it was a little bit tough to just get right back into it. We only had a few weeks to settle down in the championship I had just won, but I really want to make a run at this outdoor championship. I feel like I’m doing that now, but it was important to have a hot start. And even though it was pretty bad, it wasn’t as bad as I thought it could be, so to get on the podium at that first round at Pala felt like a win for me.

A week later you showed up at Thunder Valley and went 2-2 for the overall victory. Even after that national, however, you sounded a bit bummed on yourself again for winning a national without winning a moto!
Right, yeah. So I expect a lot out if myself and it is really important to be the guy that is winning the motos and it just didn’t feel right to me to win it like that. Of course, we’ll take a win, but yeah, I just want to be more dominant. I don’t want to get wins with consistency, I just want to be the guy that is the best out there and I want to prove that week-in and week-out. I mean, I obviously want to be consistent, but I also don’t want to be throwing together a couple pairs of seconds. I want to be the guy winning the motos, too.

You won the second moto at Mt. Morris. Exactly what you had been looking for?
Yeah, it really felt like a breakthrough ride for me. I’ve never really won a moto in that kind of dominating fashion before. Like, at one point, I had a 13-second lead and I was able to manage the gap from there. I didn’t really have to keep pushing. I’ve never really had a gap like that and been that comfortable out front, so it was kind of like a breakthrough ride for me and what I kind expect out of myself. Going forward now, that kind of moto is what I’m trying to replicate.

Infuses you with even more confidence with your racing?
Yeah, for sure. I already feel confident coming in and I do realize that I have the speed, it’s just going to take doing that consistent. Gotta grab those number ones and overalls.

What do you make of this RedBud circuit come this Saturday? Are you a fan of the place?
Yeah, I like it. I mean it’s always a good atmosphere. Everyone always says that and it’s true. It’s always a good time and the track is awesome. You can’t really ask for much more out of a track as well as the fans. Yeah, I’m really excited and fired up for it and maybe I can get my first 1-1 there. That would be cool. I’ve never gotten a 1-1. That’s really the next thing on the bucket list for me.

RedBud would be a great one to win, huh?
Yes, it really would. Just the atmosphere there is incredible, and there is just something about that race where I feel like there is no other like it.

What have you made of the competitive landscape you’ve been up against? Jalek Swoll just shocked everyone with his big High Point win, and racers such as Colt Nichols, Jo Shimoda, and Hunter and Jett Lawrence are absolutely capable of pulling off a moto win on any given Saturday.
Yeah, Jett has a lot of talent obviously. He’s still really young. We’ll see if he has it all figured out. We’ve been battling hard and I think we’ve made a lot of progress these first three rounds and we are on the come up, so I expect myself to get better from here on out. I think we are in a really good spot to where if we are starting up front, we are going to be hard to beat. As far as the other guys, yeah Jalek came out and won the last round. That caught us all kind of by surprise. Really good for him. But yeah, I’m just going to continue focusing on myself and I think we are in a really good spot. The bike us awesome. The fitness is awesome. I feel like we are just going to get better from here. It’s still early on in the season and I think it’s time to start making that push for the championship. It’s go time now. If you’re a champion, you’re going to be a champion. We can’t settle, we have to keep going and keep improving. I’m really excited to do my best and to do my part to get this outdoor championship. For me, I think everything is clicking and I think we’re going to turn in the afterburners here and start going after the wins. I only have one more year in the 250 class, so I have three more championships that I can possibly win and I’m going to do my best to do that. I’m just going to give it my all and I’m excited to keep this thing going.