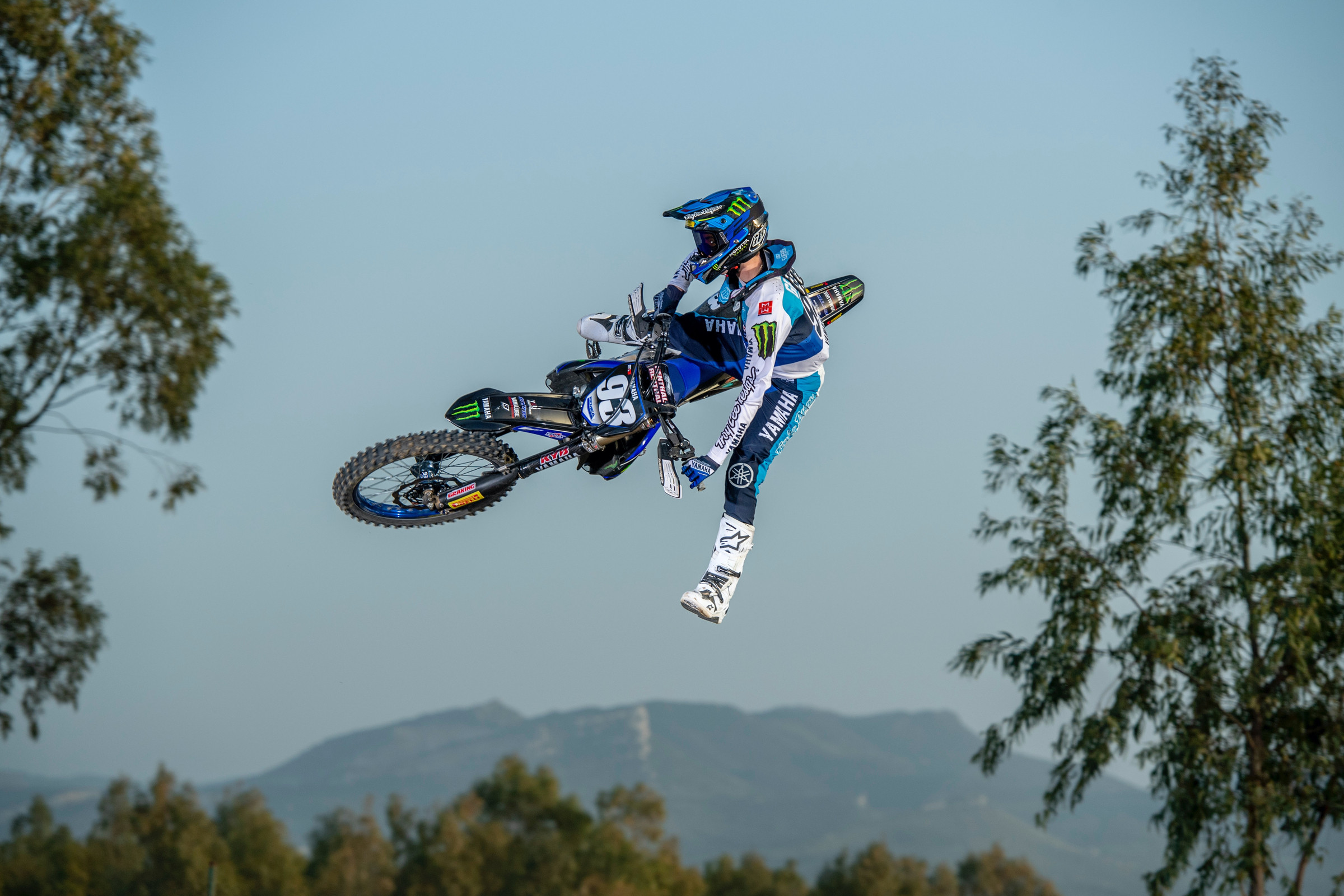 Open Mic Can Geerts Do It?

One Jago Geerts has two objectives he’d like to try and address on the eve of what will be the 65th annual Federation Internationale de Motocyclisme Motocross World Championship racing season. Runner-up in the 2020 MX2 World Championship, the Monster Energy Yamaha Factory MX2 Team rider will try again to become the first Belgian to notch a World Motocross Championship since Steve Ramon won the MX1 title all the way back in 2007. For a proud motocross nation that has put forth 52 World Championships since 1957, that’s an eternity. To do this, the 21 year-old must knock KTM off of its hard-earned MX2 throne. Going all the way back to Tyla Rattray in 2008, only one non-KTM rider has captured the MX2 title, and that was Tim Gajser in 2015. That’s an incredible run. So now it is off the hardpack Orlyonok circuit for Jago Geerts. Situated near the shores of the Black Sea, the Russian circuit has been kind to Geerts and it will be here that he goes after the World Championship he so much wants. Although feeling the slight effects of a twisted knee he suffered last week at the Ernee, France, warmup race, Geerts is confident, motivated, and ready to roll. On Thursday evening, and while he was packing up his gear bag and looking for his airline ticket, Jago Geerts took a quick breather to talk with us about the tasks at hand.

Racer X: Jago, the curtain will come up on the 2021 FIM Motocross World Championship this weekend with the season opening MXGP of Russia at the majestic Orlyonok circuit near the Black Sea. How are you, where are you and what are you up to?
Jago Geerts: Hi Eric. I’m good. I’m packing everything and tomorrow morning we’ll be leaving to Russia. It’s a pretty easy day for me. I’m just getting ready. It’s been a really long preseason, so I’m really excited to start again.

First and foremost, how is your left knee? There was recent chatter in the motocross media about the fact that you twisted it at the Ernee International in France last weekend.
It’s okay, but for sure it could be better. I crashed during the last preseason race in France and I hurt my knee. It was a really small crash, but I think the bike fell on my knee and I had a lot of pain, so we went to the hospital and they saw that I had stretched my ligament, so for sure it is not the best when you have an injury before the GPs, but we did everything that we could to recover as fast as possible and yeah, we will see how the knee is this weekend.

That’s a shame. Leading into the MXGP of Russia on Sunday, I know both you and the entire Monster Energy Yamaha Factory MX2 Team were feeling ready to go.
Yes, the winter preparation was really good this year. We worked a lot on the bike and also worked on the setup of the bike. I think we are, for sure, ready for this beginning phase of the GPs. Now and with this injury it is a little bit of a setback, but I have confidence in myself and in my physical condition and I’m real confident in the bike, so all of this is very important and we are very prepared.

You placed third in the 2019 MX2 World Championship and were the runner-up last year. What do you think? Can you go out and win the World Championship this year?
Yep, that’s the goal. Last year that was also the goal, but it didn’t happen. I was close but I finished second. Now we have a new championship this year and it is going to be a very long season, so I will try to create and make a really good base at the beginning of this season I can be on top of the game all season. Yeah, we will see. I am excited to start and I will keep working my hardest and hopefully in the end it all pays off.

As you alluded to, nineteen Grands Prix over seven months from June through December. That’s a very long, comprehensive racing season. Plenty of time to warm into it and find a rhythm, huh?
Yeah, now this weekend is the first GP and then we have one week off and after that we will then have six GPs in a row, so it will be a really long and heavy season and a little bit like last year. Last year was a really special season with the three GPs in one week. All of this is more intense than it was before the coronavirus. It’ll be nice to go back to some of these different countries and different GPs again. Also, I think at most of the GPs they will be allowing fans back in again and that’s a really positive thing. Last year at the places where we did three GPs in one week was nice, but the more traditional calendar like we will have in 2021 is what I like and prefer. This year we will be able to get back to the, let’s say, old calendar and that’s good.

You and I have spoken about this before and I wanted to bring it up again. Belgium has not produced a World Champion since Steve Ramon won the MX1 title in 2007. If you can get this done, it’s been a long time coming for your home nation.
Yeah, it would be really good to have a World Champion in Belgium again because motocross is not so popular anymore and a lot of tracks are closing. A couple months ago my home motocross track also needed to close because of the sound, so the sport of motocross is not doing so great at the moment here in Belgium. Maybe we can have a couple really good GP riders again and also have a World Champion and things can change a little bit. Maybe the sport can become more popular and more people will want to practice motocross again and we can end up having some more new tracks.

How are you looking at the competition for 2021? Who are you going to have to fight with to try and win this thing come Indonesia in early December?
Yeah, I think the competition is really strong this year. Last year it was really between me and [Tom] Vialle, but now it will be, for sure, extremely competitive. For sure during the first half of this season there will be more riders fighting for the lead and for the championship. My two teammates, Thibault Benistan and Maxime Renaux, are very fast and very competitive. From there I think there will be five to six to seven guys who can, for sure, win a GP or be really fast. I think it will be a really competitive and interesting season. We will know a lot more after Russia and after the first two or three GPs. Yeah, I think it will be really interesting.

Hey, just out of curiosity, have you watched any of the Lucas Oil AMA Pro Motocross motos from here in the United States of America? If so, what do you think?
I look at the results and also watch the recaps a little bit. I haven’t really watched the full races because I’ve had really busy weeks with all the physio and with trying to get my knee recovered as soon as possible. Yeah, the racing looks really nice this year. There are really a lot of riders who are fast like Roczen and Ferrandis and all those European guys that are out there. For sure, I will keep watching and I find it all real interesting.

Okay Jago, so off to Russia. What will make you happy leaving there come exiting the paddock on Sunday night?
The track is really nice in Russia. It’s a natural track with a lot of jumps. The ground is also really nice. It’s hardpack, but with a lot of ruts and a lot of bumps. The track suits me well. In 2019, I was on the podium in the MX2 class, so it suits me well and I’m happy to go there. Now, with my knee injury, it’s a little bit more difficult to say where I want to finish, but I will be happy when I can finish the two motos and I feel good and know that I did my best. The result is not so important this weekend. I’ll try to get as many points as possible, but we will need to wait until Sunday and see how things go before I can get a feel for where I will be this season.