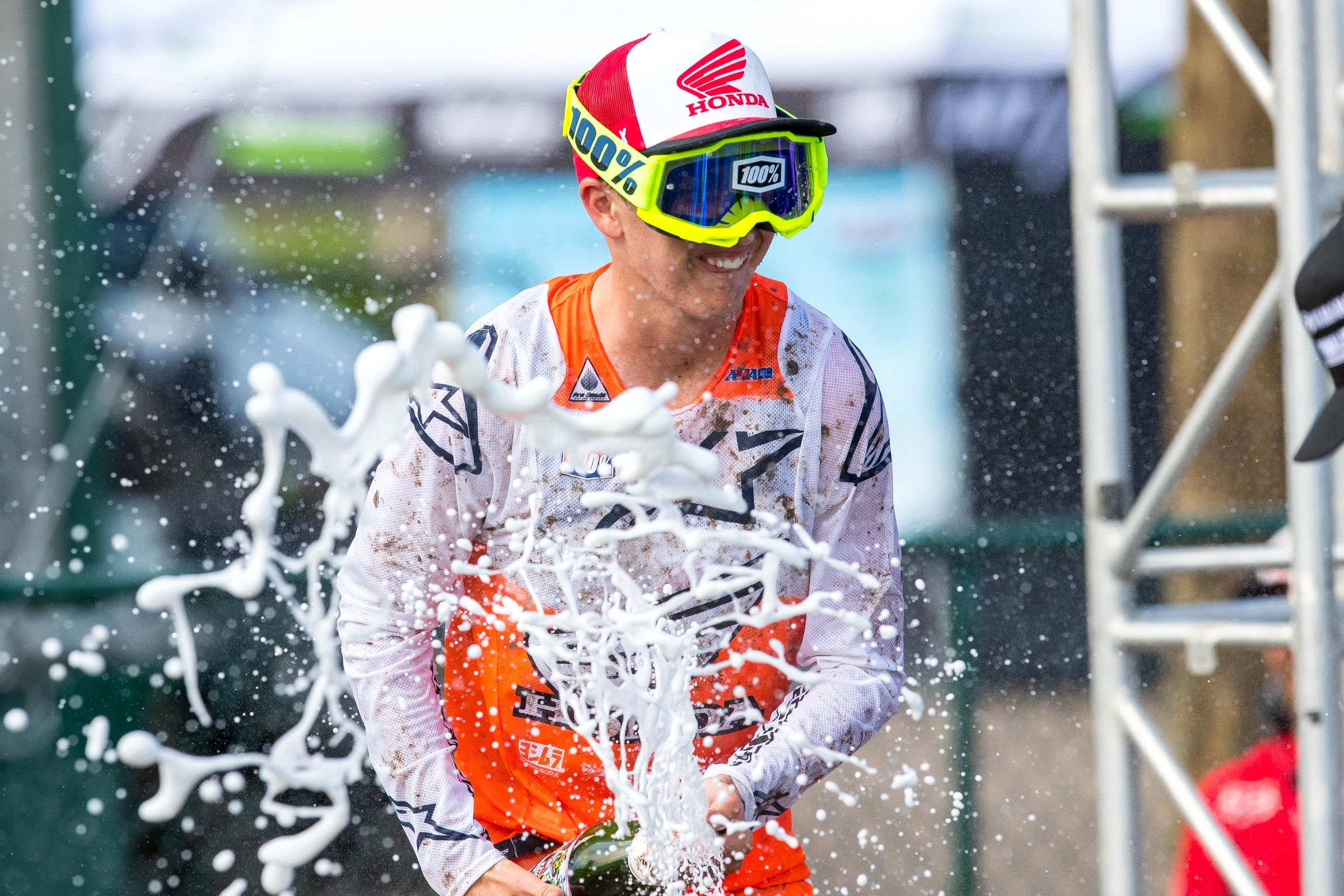 Honda HRC has a lot of good things going for them right now. On top of leading the championship in both classes of the Lucas Oil AMA Pro Motocross Championship, they also have all of their riders healthy and contending at the front. Even though Ken Roczen was the only rider to take home an overall win for them on Saturday, the rest of the team still all had strong performances with 250 class riders Jett and Hunter Lawrence finishing second and third overall, respectively, while 450 class rider Chase Sexton put 4-5 scores together for an odd sixth overall. Sexton tied for fourth and actually just missed the podium by one point on the day, but still a solid day overall. The Lawrence brothers spoke with the media via Zoom after the race while Sexton discussed his day in the Honda HRC press release later on.

Racer X: Jett, you had a solid day. Fourth place in the first moto and ended up winning the second moto. What was the main difference for you there in moto two?
Jett Lawrence: I think in moto two I just got a bit of flow, to be honest. The first one I didn’t gel with the track really good, to be honest. The second one I was able to get out and be behind [Justin] Cooper. I was able to follow his lines and he had a lot of good lines I was able to pick up on. I had some different ones in other spots. He kind of helped me get into my flow a bit. The second one I just got into a really good flow, basically.

Can you take us through the pass on Cooper? Sort of setting it up. Was the track a little bit hard to find a place to pass and it was just going to be one of those moments where, this is where we’re going to do it? Just talk us through that, setting it up and the motions of making it happen.
The track was definitely difficult to pass because it was so flat and fast. I was setting up since I think the second downhill after the rollers and was able to get close enough. The first thing that popped in my head was there and remembering [Dylan] Ferrandis’ pass on AC [Adam Cianciarulo] in the first moto. So, I’m like, if I can just get close enough, I think I can pull it off. I was able to pull it off. It was a little sketchy and coming out it was starting to slide. I got very lucky on that and was able to somehow pull it off. I definitely set up way back, almost at the start of the lap.

Walk us through those early passes there with Cooper.
I think I’m going to say it similar as Justin. I had fun in that one. It was good. Those first few passes were like, sweet, we’re going to get it on! It should be a fun race. I had a blast in that one. It wasn’t like, I just passed him and I’m good to go. He just kept knocking back on the door like, “Hey, I’m still here. I’m going to get you back.” So, it was good. I had a lot of fun that second moto. Justin rode really well in that last one, so congrats to him. I had heaps of fun in that last one.

Racer X: Hunter, just take us through your day. It was just that much better to get on the podium compared to round one. Do you feel you rode better, or was it just track position and stuff? How was your day overall?
Hunter Lawrence: I think we definitely rode better. We did a bit of work during the week with the team testing suspension stuff, which definitely helped. Just starts were a little better. Obviously with the second moto with that little crash wasn’t ideal, but we were in a pretty safe, solid third. The gap to fourth place was pretty far, so I had a cushion there. It was definitely a step better than Pala. I’m happy, but nothing to jump up and down about. It was all right.

Do you have some areas where you know you can improve? You don’t seem 100 percent satisfied yet.
Yeah, for sure. I feel like the outdoors really puts a magnifying glass over all the areas that aren’t 100 percent yet. Obviously coming back from my shoulder injury and stuff, it was quite a lot to rebuild. Supercross I could manage pretty well. So, we’re still building that. Just bike time, like supercross is so much slower speed than outdoors. But we’re doing good. We’re working hard and we’ll be where we want to be shortly, so just building and enjoying the process.

A lot of times in the past this track has been really deep and really rutted. It didn’t form up that way. I know you haven’t ridden here a ton, but were you a little surprised? What type of track do you prefer? Some riders like it without ruts so they can move around, some guys like being locked into ruts. What do you like?
It was a great surprise to see dust in the first practice and in timed qualifying. I think that was pretty different and surprised a lot of people. Normally they’re running a paddle tire and it’s just so thick and heavy. But I think it was good. I think what was pretty cool was it was a hard-pack track and you had to have good front wheel feel. It wasn’t just soft, loamy stuff. I think it’s cool that if they could do like you’ve got your sand and your loam, like your Red Bud and stuff like that is deep and whatnot. But the hard-pack tracks like today, et cetera, they are not ripped as deep just because it brings into more of a skill than just being able to get into a slot car line and you’re kind of stuck there. I think it was good. I think it made for great racing. There was a lot of good passes going on in both races. I think people have a split decision, but I thought it was cool. It was different for a change. It brings out other techniques and areas and skills of riders. So, I think it’s good.

Sort of just going back to what we were talking about with the track setup, how did you find the motorcycle reacting obviously with more altitude this week compared to California last week where there was no issue with that? Did you guys notice something different with the bikes on how you set them up?
Yeah, for sure. I think I speak for nearly every 250 rider that we lose quite significantly a lot of horsepower at altitude. As far as suspension, handling-wise, nothing really changes, I don’t feel like. Just the horsepower, really. We’re feeling it out there. First practice we’re casing some stuff. It’s rough. They cut a few singles down for us to help us hit some down ramps, thankfully. But it was good. Mostly it’s just the engine and your body that takes the majority of the toll. Like when you have a water bottle going up in the plane when you take off and stuff you see the water bottle shrink or expand or whatever, that’s what the altitude does to everything inside our body constantly.

Chase Sexton: I had high hopes coming into today after last weekend. It started off rough in the first and second practices. In the first moto, I rode okay and finished fourth, but overall didn't ride to my potential. In the second moto, I actually rode well, but started last again; I made a bonehead move and started in second gear like normal [instead of first for the high elevation]. I had to ride as hard as I could from there on and finished fifth. Overall, it wasn't the day I wanted, going 4-5, but we're back in two weeks and I'm looking forward to High Point. I really like that track and I'm excited to go back to the East Coast.