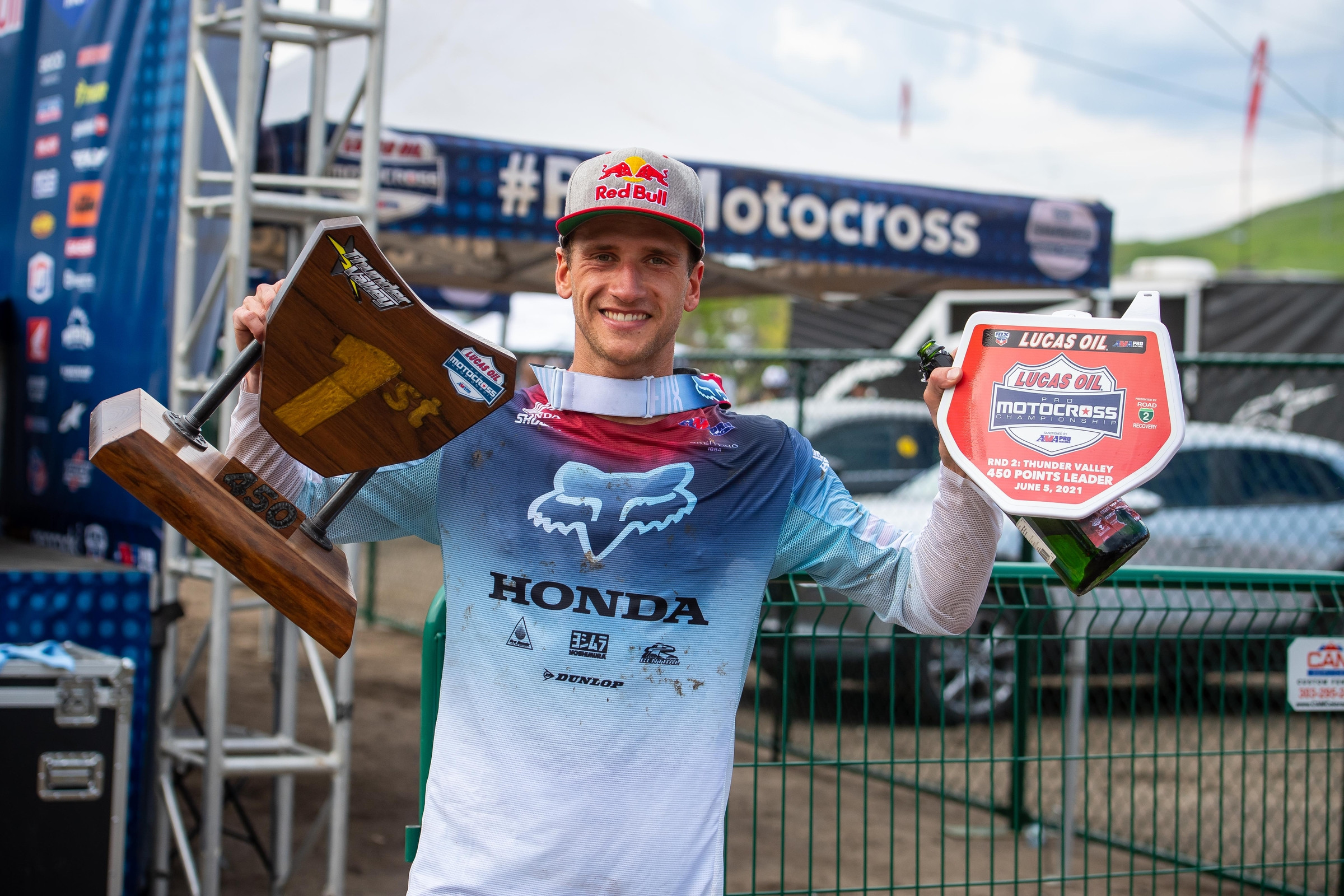 The Conversation Not Playing Possum

Honda HRC’s Ken Roczen started this Lucas Oil AMA Pro Motocross Championship campaign setting low expectations. In the preseason press conference, he talked about feeling “disconnected” to motocross after skipping the 2020 campaign. He mentioned being five seconds off in lap times. He mentioned trying to just improve as the season went on. He seemed subdued and low on confidence.

Now he has started the season winning three of the first four motos, with a 1-1 sweep for the overall victory at the Toyota Trucks Thunder Valley National in Colorado. So was Ken really expecting to start slow, or was this some sort of mind trick? He addressed that and other questions in the post-race press conference.

Racer X: Ken, you were not exuding confidence coming into this season. You’ve now won three of the four motos. Are you surprised with your own performances to start this year?
Ken Roczen: Yeah, a little bit, to be honest. Like you said, I wasn’t really full of confidence and definitely had some work to do. Luckily, the muscle memory starts kicking in. I’m starting to feel better. We did some work to the bike as well that I wasn’t 100 percent sold on when I left the track during the week, but you’ve got to go racing and prove that it’s better and I actually really enjoyed that today. I knew what the bike was doing. Also I like Thunder Valley in general. I think the ruts and the clay kind of dirt just suits me very well. I dealt with the bike really well. Honestly, I enjoyed both motos. I really enjoyed the first one. Obviously it was me and Adam [Cianciarulo] and Dylan [Ferrandis] battling. It was super fun. Not just because I won, but in general, just being there the whole entire moto and us three battling and passing each other was a lot of fun. I also liked how in the beginning it’s been a bit of a debate with not ripping it as deep, but I didn’t mind it because it allowed us to move around on the track a lot and use a lot of different lines. I really enjoyed that side of things.

In supercross you talked a lot about settings that you were changing with your team, and you just mentioned settings again. I’m just curious if you can elaborate a little bit as a rider at your level, do you ever find settings and then say, “I’m going to run with this?”
The most difficult part is really just finding a good base. So, every rider is different. For example, Chase [Sexton, Honda HRC teammate] likes his bike set up completely different than what I do. I just feel like we weren’t there. The base that we had coming off of supercross was not good enough. I was pretty boisterous about it. Obviously, I still know how to ride a dirt bike, but at the same time I had a little bit of difficulty exactly feeling [what I needed to]. I just needed some time on the bike, needed time riding moto and get used to some stuff. I’m pretty pumped with what we have come up with so far. Then obviously there’s a good balance. I’ve got to do some motos, too. I haven’t done a 30 plus two until almost the week leading into Pala, or just the week before. So there’s like this perfect balance of you’ve got to get some testing in, but then the time runs away as well. Basically what I raced with in Pala, it gave me a good idea of what the bike is doing and what I need. So based off of that and what our thoughts were, we had a couple of days under our belt with some motos and also doing some testing on Thursday. It’s not easy because I rode well in Pala, but I definitely felt like we needed to get the bike better to help me out a little bit more. But just because you try new settings it doesn’t mean that it will be better when you race it. So I was a little unsure about it on Thursday, but came here and we made a tiny little clicker adjustment after the first practice and I pretty much just ran with it. I think what will help as well is just more time with that setting. Now that I’ve put it through a couple motos, I felt solid about it. I really did. Obviously, it would be good to try the setting on a couple other types of dirt, but we always want to try to get the bike better and you’re never going to really get it a hundred percent in everything, but it’s really just whether I can deal with the negative if it has a lot of positive. So, I was really happy with what our suspension guys came up with. Not to mention, I also have a new suspension guy, Trey, that came from GEICO back in the day and he’s helping me out, too. So far, I was pretty pumped with what the team came up with.

That first moto you had to find some fire there and fight for it. You did it. Did that moto win feel any more special than the second one? Talk us through the battle back.
I think I did. I think the first one felt a little bit better, but honestly it’s so hard to say. After the first moto was done, I was like, man, this felt so rad. Getting passed and then just coming back, it just feels good. It’s different. I’ve been getting back in the outdoor flow, so I feel like I’m finding some good lines and that kind of stuff. So, after I made some passes and I was leading, the riders behind me can obviously see some lines. Obviously Adam is known for putting the heat down, especially in the beginning as well. Once he got by me, I kind of just did the same thing. Mentally I was like, let’s see where he’s going. I kind of just followed him around and found some lines there. Then Dylan passed me as well and I did the same thing. I basically just found a couple lines that were better than what I was doing and just got into a flow. I feel like late in the race, I charged the downhills a little bit harder. I had my areas where I was gaining on him. I always had to close the gap to Dylan a little bit. I knew that once we got around Adam too, I just kind of wanted to stay there and pressure him a little bit. So I found these spots where I felt like I was better. So if I could just get my stuff together in some of the other areas where I’m close to him, I feel like I can dive in there, and that’s exactly what I did.

Obviously, you’ve got your motorhome, but what’s it like having the two Australians there, and of course Chase on the same team? The Honda truck hasn’t been this full since probably the Yogi, Windham days [20 years ago]. Is it a little different vibe? There’s a ton of guys underneath the truck. What has it been like for you, you’ve been on the team so long now?
Honestly, with so many riders there and the hospitality truck is kind of far away and it being hot, I was just cooped up in the motorhome the whole time. I kind of feel bad sometimes because I kind of like hanging out with the team and whatnot, but I was like, I’m just staying in here. So I actually don’t get to talk to those guys as much. I kind of just did my own thing. I only came out when I had to. I guess it’s the luxury of having a motorhome.

But you do like the Lawrence brothers?
Oh, yeah. Honestly, we’ve had somewhat of a long relationship. Them being in Europe, my dad took care of them for a while. They were staying at his place. My dad had a motorhome for them and whatnot. So we kind of have a little bit of a longer relationship that already went when they were across the pond. It’s all good. I get along with them well, and I also get along with Chase. Obviously we hang out quite a bit even when it’s away from the track. So I think we’ve got a really cool team going right now.

It appears you want to let everybody know that when you were saying you didn’t know where you stood coming into the season, that was not mind games. You were not playing possum. You were just being honest. Do you want to clear that up for the record?
I think it was [Kris] Keefer or something that put it out there. I read it and I can see how it looks like that from the outside, but I promise you guys I was not. Honestly, you can probably ask all the other riders maybe even on here and some of the teams. [Preseason] It was a bit of a struggle. I was not playing possum. Just to clear the air.

[Your friend] Adam [Cianciarulo] put a pretty aggressive pass on you for the lead. Ken, were you okay with that? He came by on the inside right after the start.
[Laughs] I heard somewhere that somebody said, “This is for sure going to affect their relationship.” Before moto two I came up to him and I’m like, “Hey, I think that’s what they said,” but not bit did it faze me at all. It just doesn’t. I honestly want Adam to do good. He’s been through some injuries as well. We race each other hard on the track and it was fine. I had zero problems with it.

Racer x: Adam did you just see an opening and go for it? Did it matter who it was that you were passing for the lead there?
Adam Cianciarulo: No. Not in the heat of the moment like that. I’m not reading jersey numbers out there. I’m just trying to get to the front and do my job. I was hoping when I showed a wheel on the inside that he was just going to brake, but he kind of took it all the way to the end of the corner. Obviously, it was an aggressive move, but he got me back a couple of laps later so it’s all good.

Roczen: First off, I left the door open. You can’t see anybody, so if he puts his front wheel in there, I’m kind of just committed to the turn. It’s a weird angle thing right there and how the turn sweeps, so it definitely makes for some collision without wanting to.