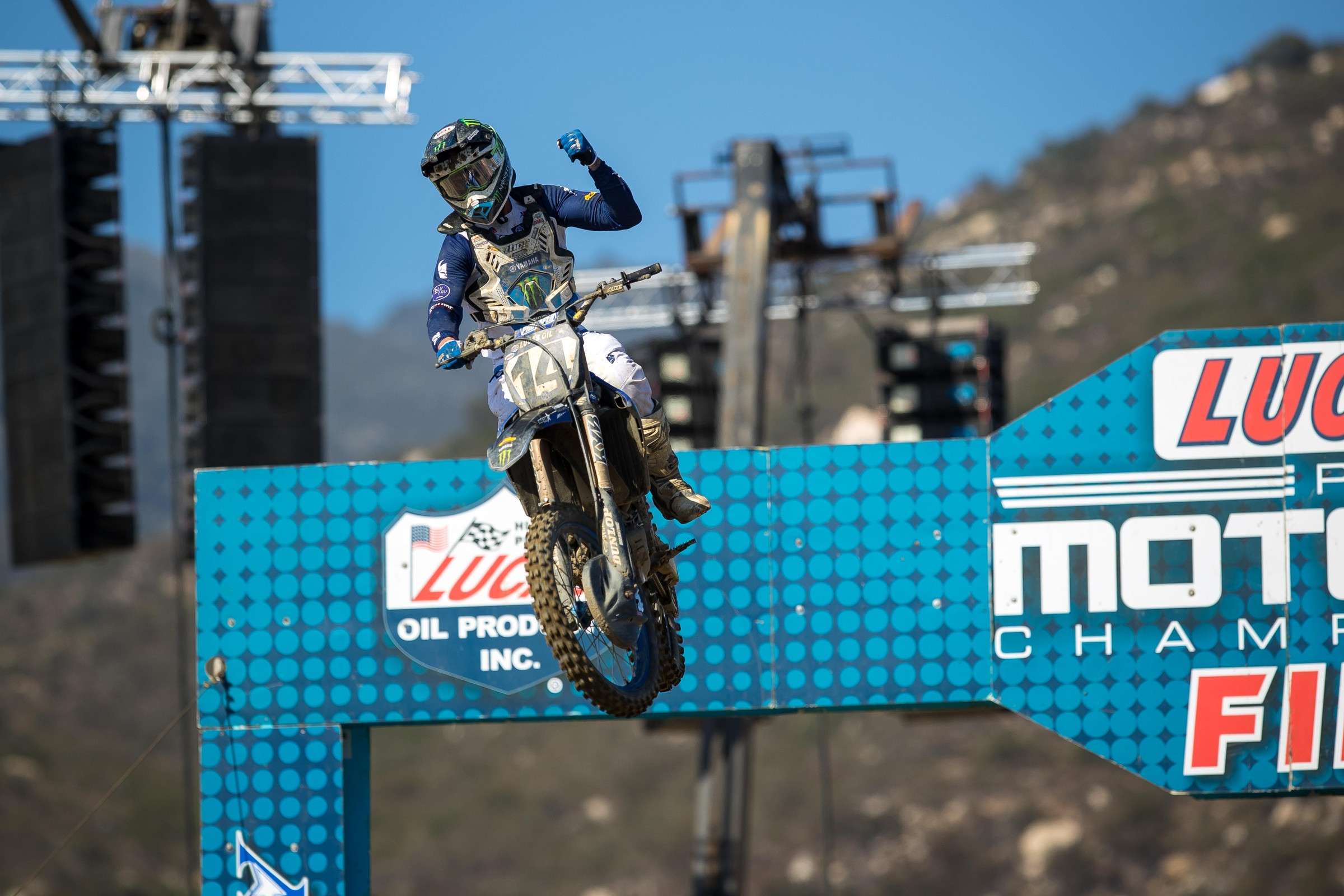 When Monster Energy/Star Racing Yamaha's Dylan Ferrandis scored the overall win in his first-ever 450 Pro Motocross race, he joined a fairly small list of riders who won in the 250/450 class the very first time they entered an outdoor national in the class. Ferrandis, last year's 250 class Pro Motocross Champion, also became one of four French riders to pull this off!

Let's start with day one of AMA Pro Motocross, which goes back to April 16, 1972. The first winner ever was New York's Sonny DeFeo, who was riding a Ghost CZ at Road Atlanta in the 250 class. There was also a 500 class that day, and the winner there was his teammate Barry Higgins, also of New York.

Later that same series, Washington native Jim "Bimbo" Pomeroy entered his first-ever Pro Motocross race in the 250 class at Saddleback Park. The future "First American" took the win, and one year later would become the only riders in motocross history to win both his first outdoor national as well as his first Grand Prix when he won the '73 250cc opener in Spain.

Gary Bailey was a veteran of motocross when that first AMA National Motocross Championship popped up in 1972, and by that point "The Professor" was as much into teaching and promoting and building tracks as he was into racing. He started the series on a 500 and came close to winning a couple of time, but then in June he switched to the 250 class for the race in Snyder Park, Indiana, and won in his debut aboard the smaller Bultaco.

(One other first-time winner that year, though not in the 250 class, was "Bad" Brad Lackey, who showed up at the third round Cal-Expo race in Sacramento and won the 500 class, marking his first AMA win as well as the first for the Kawasaki brand, which he was debuting in an AMA race.)

There's also a special place in motocross history for Pierre Karsmakers, and more specifically Yamaha. The Dutchman was imported by Yamaha in 1973 to help them shake down their new motocross models and also help guide younger riders. Karsmakers ended up winning both the first 500 National he ever entered (Daytona) as well as the first 250 National he entered later on at Manning Cycle Park in Utah.

From that point in 1973 it would be nearly a decade before a rider to win a 250 National in his first attempt. Yamaha's 17-year-old Rick Johnson was man to do it next in 1982, riding a mostly stock YZ250 to the win in the Hangtown opener.

In 1983 the opening round of the series moved east to Gatorback in Florida, and in his very first 250 National, Kawasaki's Jeff Ward took the win. What's interesting about this is the fact that Ward was already an established superstar, having claimed the previous year's AMA 125 National Championship. He had also led Team USA to Motocross of Nations wins in both 1983 and '84, riding both 250s and 500s. He was also already a 250 SX winner!

Nineteen eighty-nine would mark the beginning of a very long and important chapter of American motocross that continues to this day. French sensation Jean-Michel Bayle showed up at the Gatorback opener in a mini-van, with help from Pro Circuit and American Honda, and won the 250 National opener. He would be followed by a way of Frenchmen that stretches all the way to Dylan Ferrandis last weekend. In between two other French riders won their first 250 National opener, Suzukis Mickael Pichon in 1998 at Glen Helen, and then Honda's Sebastien Tortelli the very next year, also at Glen Helen.

The Glen Helen opener's streak of producing first-time 250 National winners in their class debut extended to 2000, but not with a French rider, but rather a Floridian. Kawasaki's Ricky Carmichael, by this point a three-time 125 National Champion, won in his 250 class debut outdoors. And get this: In 2001 and 2002, two more first-time national entries would also win, but in the 125 class, as KTM's Grant Langston won in his debut in 2001 and Kawasaki's James Stewart won in his first-ever Pro Motocross race in 2002.

It would be almost another decade before we would see another first-time rider win in the big-bike class, though by this point the 250 two-strokes had been replaced by 450 four-strokes. And three-time "Lites" class champion Ryan Villopoto was the one to do it, winning at Glen Helen in 2009.

The last rider on this list, before Ferrandis, of course, is another international superstar. In 2017 Dutch KTM rider and multi-time FIM Motocross World Champion Jeffrey Herlings decided to use a break in the MXGP schedule to come to America early for the USGP in Florida and enter the Lucas Oil Pro Motocross season finale, the Ironman National in Indiana. Herlings put on a superb performance to win the first 450 moto and then come from nearly last to overtake Marvin Musquin in the late going of the second to take the overall win in his one and only AMA Pro Motocross race.

BONUS: When discussing previous first-time entries to win their very first 250/450 Nationals, we mentioned the old 500 class a few times. It ran from 1972 through 1993 and had a rich history of its own, with legendary champions like Brad Lackey, Broc Glover, David Bailey, Rick Johnson, Jeff Ward, Jean-Michel Bayle, and more. But it sometimes gets left out of bench-racing and trivia because most consider the old 250 two-stroke class as the one that evolved into the 450 class a decade ago. So, it's unfortunate that the 500 class gets left out at times. We asked one of our favorite SX/MX statisticians, "Producer" Pete Richards, to give us a list of first-time entries to win their first 500 Nationals. I mentioned a couple—Lackey and Higgins—above, but here's all of them, in a neat graph produced by Producer Pete.