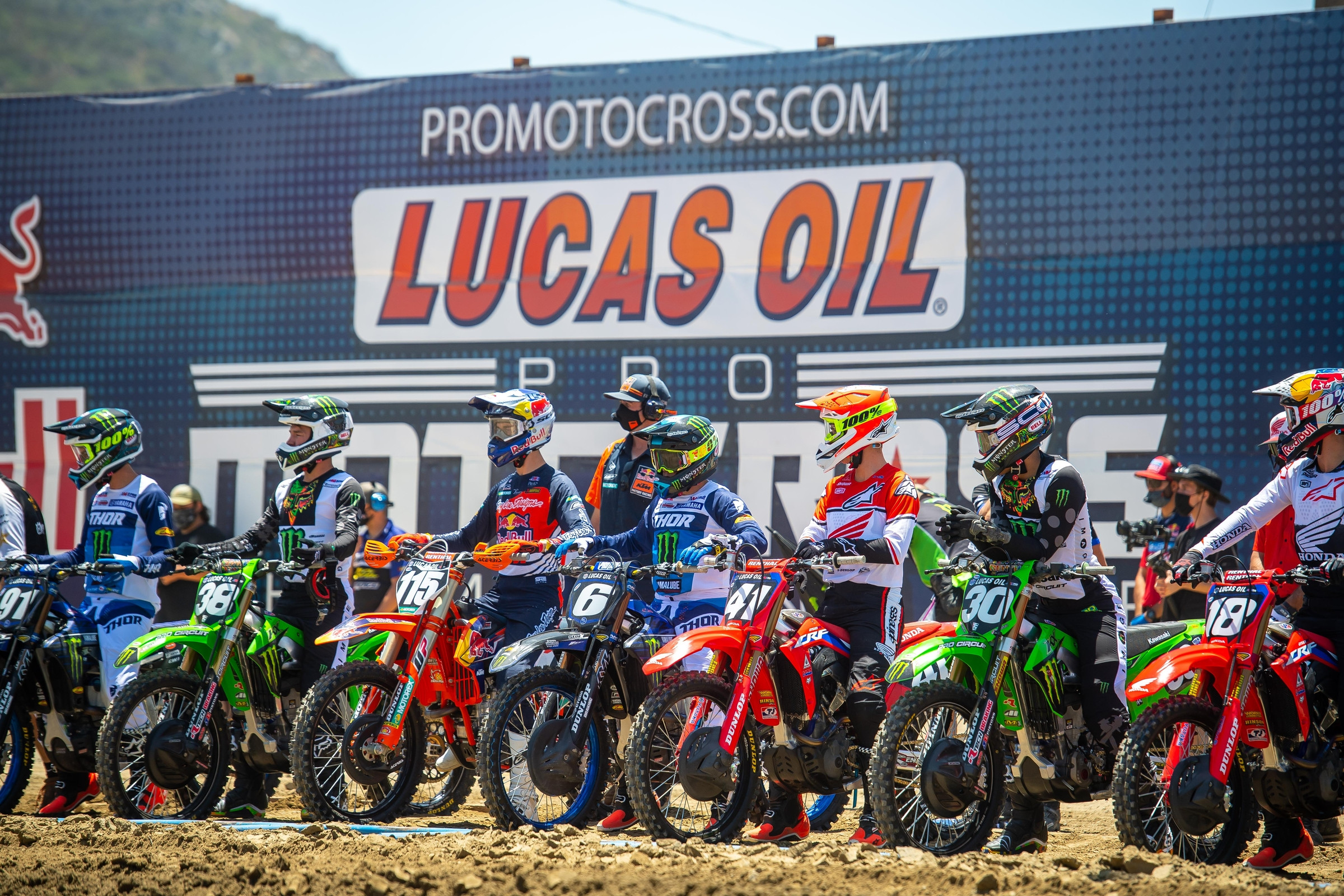 Round two is a fantastic venue for the Lucas Oil AMA Pro Motocross Championship. Thunder Valley Motocross Park is located just outside of Denver, Colorado, and if there is a more convenient, picturesque backdrop for this series, I haven’t seen it yet (calm down Washougal fans, you’re great, too). The 5,000+ feet of elevation adds to the uniqueness of Thunder Valley, as well as testing both man and machine. The lack of oxygen starves engines, lessening torque and horsepower, while also putting a big strain on rider fitness as well. By the time the motos arrived, I felt fairly normal but those first few laps on Saturday morning are a doozy on all fronts.

The Thunder Valley track is built on a hillside. There are elevation changes of all sorts and off-camber turns to up the ante even more. The hard base is softened by the truck loads of sand brought in specifically for this event. That mix of sand and hard pack can get a little tricky in areas, especially late in the second moto. Even so, the addition is welcome compared to a concrete-esque track that we could otherwise see.

The start is a long gradual uphill, furthering the strain that the elevation is already putting on everyone’s engine. It’s such a tough ask that most riders will start in first gear! Thunder Valley and the Salt Lake City Supercross round are the only times throughout the season that riders would even consider a first gear start. I can remember using first gear to pull a top three start in both 450 motos back in 2007, and even then, I felt the engine was gasping for air. Keep in mind, fuel injection has improved performance on the modern four-stroke (versus carburation) but as you’re watching the first qualifying sessions Saturday morning, just know that the riders are all complaining to someone about a lack of power.

One other aspect of note are the long downhills at Thunder Valley. Many of these get brutally rough in the second moto and those with the setup and confidence to power down them (versus coasting) can make both time and passes here. I believe Thunder Valley to be a tad bit difficult to pass in a few sections, making those downhills more important than ever. When your competitor checks up in the face of huge braking bumps while descending a mountain, the willingness to upshift and be aggressive is a huge advantage.

Dylan Ferrandis won his first 450 Lucas Oil Pro Motocross race! His 1-3 score was a strong statement in a stacked class.

Aaron Plessinger came out swinging, nearly winning the overall with a 4-2 score (needed to pass Ken Roczen in the second moto). I didn’t see that podium finish coming but will be on high alert for Plessinger this weekend. Fool me once, shame on me. Fool me twice, shame on me again. I think that’s how it works?

After a brutal end to Monster Energy AMA Supercross, Roczen somehow found a way to win the second moto at Pala. It felt like he surprised even himself but hey, winning doesn’t have to be an expected result. The fact is that he took advantage of his good start and perhaps breathed life back into his summer.

Jett Lawrence has so much hype behind him, it’s starting to feel unfair to a 17-year-old kid. In the face of that, though, he’s winning! His second moto ride was nothing less than phenomenal. If there is a brighter future in moto, I haven’t seen it.

Jeremy Martin’s 1-2 score was edged out by Jett’s inverted result but make no mistake, this was a positive day for J-Mart. He is banged up a bit, dealing with injuries that likely won’t improve this summer. To prove he can fight through the discomfort was validation that this championship run is very intact. He has the fifth most 250 moto wins in the sport’s history, up there with the legends of this class. Do not underestimate his chances of a third title.

The opening round is such a guessing game. Going into round two, however, we have a better idea of what to expect. The real question is can we trust what we saw as we transition from a track that many practice on into a track that is much less familiar. My strategy will be to take last week’s trends, factor in some historical data from Thunder Valley, and possibly utilize a bounce play. The bounce play strategy is risky because it involves doubling down on a rider that had a bad opening round but when it works, the points reward is sweet.

Another factor to consider arrives in the form of the 2020 rookies. Riders like Dilan Schwartz, Nate Thrasher, and Jarrett Frye all raced this event last October, so we have an idea of what to expect. Information is power when it comes to fantasy so I would suggest reviewing last year’s event to predict what Saturday will bring.

In the 450 Class, I still think factory value is the play. Riders like Zach Osborne, Eli Tomac, Adam Cianciarulo, Joey Savatgy, Christian Craig, and Dean Wilson all fall into this category. They are all double points eligible, and all have the potential for top ten finishes. There are some higher handicap riders available, but I don’t see any reason to take big chances with powerhouse riders ready for the picking. If you are going that route, though, Freddie Noren, Ben LaMay, Justin Rodbell, Jacob Hayes, and Phil Nicoletti all look pretty juicy. Maybe a mix of both would be the best course of action here. Limit the risk with a factory rider or two but give yourself a higher ceiling with one of the privateer heroes.

I have decided to take the Industry Seating Podcast public via SPAC (blank check acquisition). I have the full support of the Wall Street Bets Reddit crew and we are projecting our share price to hit $1,000 by July.

Rumors have Jett Lawrence’s next contract to be funded by the Federal Reserve.

The panic button is in full effect for a few select factory riders on Saturday evening.

I mistakenly think someone killed a skunk 742 times over the course of the weekend.