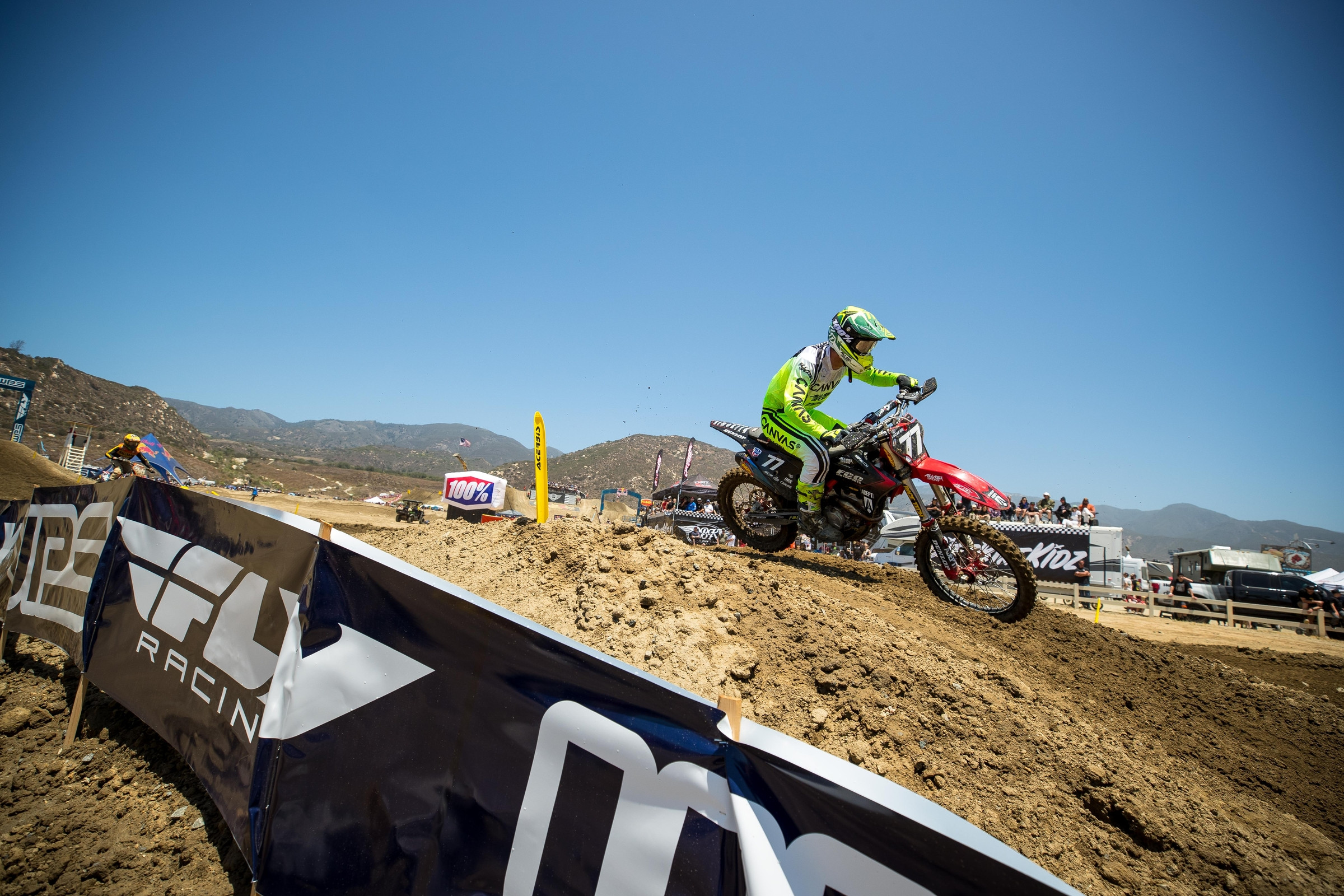 It’s never fun to finish 21st-place in a moto. Being the first guy that put in the full 30 minutes plus two laps but didn’t earn a single point for the effort always has a little sting to it, but for Jerry Robin, it had a lot of sting to it on Saturday. After crashing in the morning qualifying sessions, Robin’s bike actually landed on top of him causing some minor burns to his back from his pipe and a scraped-up elbow. Despite the early setback, Robin still put his head down when the gates dropped, though he just missed out scoring points in the first moto. Another untimely crash in the second moto saw Robin’s day come to an end, but he wasn’t letting the situation get him down. We caught up with Jerry at the end of the day to see how he was and what he thought of his day as a whole.

Racer X: So, practice crash started the day, and then crashed second moto to end the day. Is that how it goes, just one of those days?
Jerry Robin: Yeah, pretty much. I went over the bars coming into a turn and just hit a soft spot and the bike landed on me and burned me in by back pretty bad and my footpeg jammed my elbow. And then, first moto, just got 21st so that was a bummer. And then in the second moto, I just started sliding out and a kid hit me and just smashed my elbow again and I couldn’t really hang on. It was just, the track was gnarly. I feel like this was probably the sketchiest track I’ve raced on which is kind of a bummer to start the year like that. I’ve only rode three times since supercross, so I was a little rusty. But Thunder Valley should be better and I’m looking forward to that.

I saw you responded to Alex [Ray] on Twitter because he said, “Did rain come through?” and you said, “I think it was a tsunami.” So, the track was pretty wet in the morning I take it? Just muddy and mucky most of the day?
Yeah, I don’t know. Like during the week, this place is prepped awesome. Like the ruts are good and stuff like that, they just way overdo it for the national. It’s kind of a bummer because the track is going to develop good no matter what, at least during the week it does. Yeah dude, like some of the insides, we just started using them in moto two and it took like, I don’t know, eight hours to dry out. It was insane. So yeah, there were some lakes in practice, but it is what it is. It’s the same for everybody.

Do you think that—because it got really rough, especially during the second moto—do you think it’s because it’s ripped so deep like that or that’s just what Pala is and it’s going to get that way no matter what you do?
No, like Pala during the week, it hardly ever gets ruts on the faces [of jumps]. I mean it gets some kickers and stuff like that, but nothing like today. I’ve never seen this place like that, not even last year or previous years. Like they really watered it. I mean there was still standing water in the doubles before the finish in moto one. So, it is what it is, but they overdid it a little.

So, the crash obviously set you back a little bit for the day but were you actually happy with the riding you did in the first moto? Like did you come off the track and think, “Alright, I can get into this?”
Honestly, no. The first three or four laps was solid. I caught the group that like [Colt] Nichols and [Nate] Thrasher were in, and I just started focusing a lot on my burns. My chest protector was rubbing it raw, and it was just stinging so bad dude, it was insane. And I started trying to find smoother lines, and there was just nothing there and I just lost a ton of spots. Then I just kind of put my head down and blocked out the stinging and ended up 21st.

So, what’s the reset now? Are you just going to take most of the week off to try to heal before you go to Thunder Valley or are you still going to try to get some riding in?
I’ll probably just take the week off and then hopefully the burns will heal. Should be good.