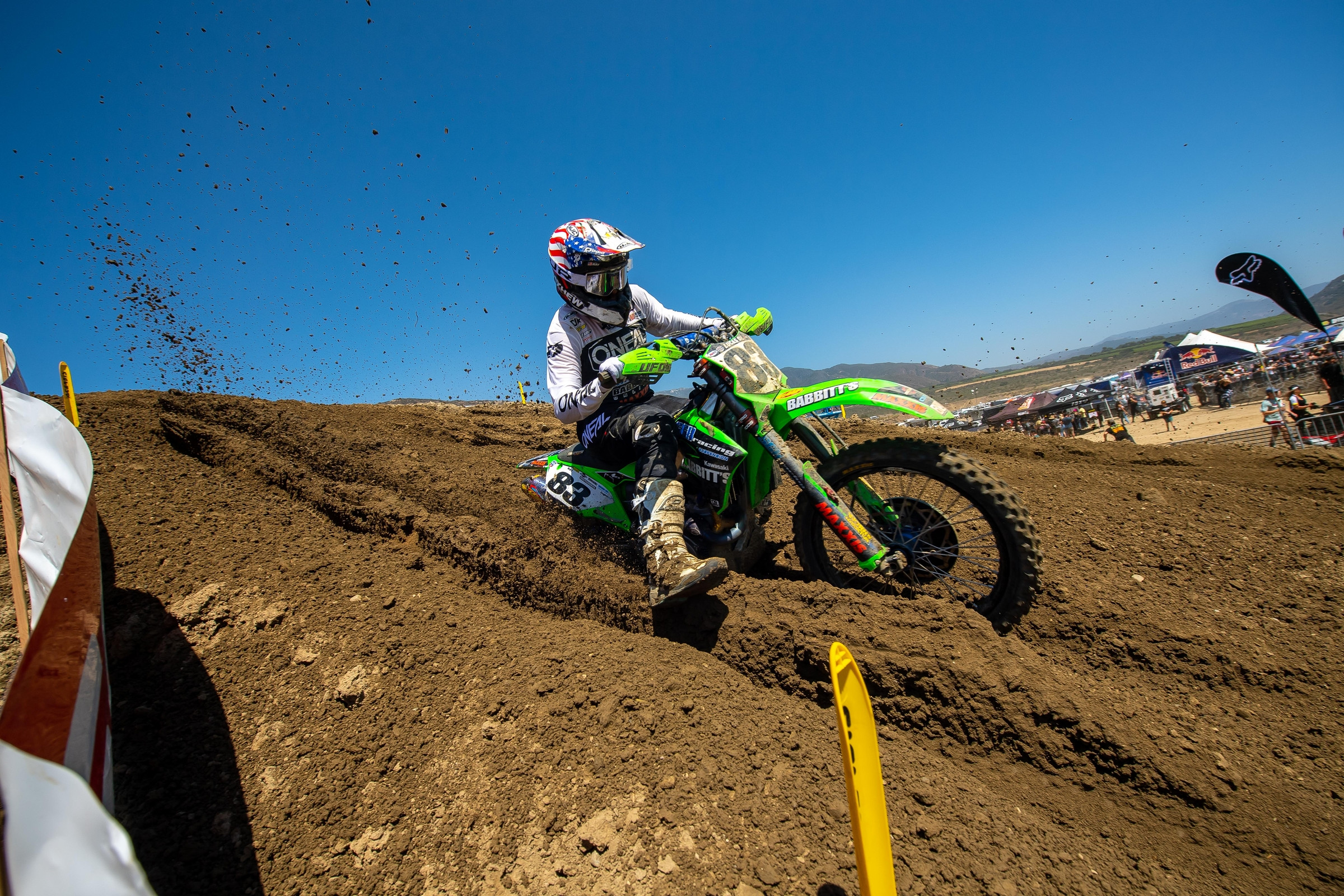 Admittedly more of a “supercross guy”, Alex Ray is trying to find his footing when it comes to the Lucas Oil Pro Motocross Championship. Despite a day on zero points being added to the board, Ray still felt that he’s in a better spot than he was last year following the first few rounds of the series. The SGB Racing/Maxxis/Babbitt’s Kawasaki team is one of the funnest teams in the pits to be around and that loose vibe is one where A-Ray is finding comfort in building up to where he wants to be. We caught up with him after his 28th overall at the Fox Raceway 1 National to see how things went to kick off his 2021 season.

Racer X: I think it was 29-26 for you today. Rough day?
Alex Ray: Whatever it was, it was terrible. I don’t even know. But yeah, it was a rough day. The track was very challenging for me, obviously. I’m more of a supercross guy. I’m trying to get my outdoor legs a bit. You know it’s tough. But actually, we’re a bit better this year than we were last year because I don’t even think I finished a moto until Ironman. So, yeah, the bike was great all day today. Just had a little bit of a mishap in the first moto with the little gas hose. Gas was splashing on me, but we got that worked out for the second moto and I just really couldn’t find a flow today. We didn’t score points, weren’t really even close, but it’s a building block and we can move forward from it.

I caught you in, I think it was the first qualifying session in the back of the track, you got a little sideways in the whoops and then jumped off the track in the next section.
Dude, honestly in practice, I was off the track more than I was on it. I’m doing my merch a lot of justice right now: alexray.co. If anyone wants to get some “sketchy” merch dude, and help me out, that would be great. But yeah, I definitely had a lot of sketchy moments today, so I feel like I’m doing the brand pretty good.

I saw on Twitter that you thought it rained last night. It was like mud this morning, huh?
Yeah, it was a quagmire. I don’t know what they did with the track. But yeah, we’re in California, we’re in a drought, but all of the sudden I come here and it’s just a big mudhole. You know, we were going outside in every turn in practice and the insides didn’t develop until that second moto. So yeah, it was pretty tough today, but we’re healthy and we’re all in one piece.

How much different is the track on race day here versus when you practice during the week? Like do you set your bike up thinking it might turn into what you practice on during the week and it’s miles off?
We were a bit off. You know, you want to set it up pretty stiff here, because obviously you have big jumps and stuff like that. I think we were a bit soft in the fork. But it’s more high-speed acceleration bumps here during the week, and then here it’s more like huge braking bumps, potholes everywhere. The ruts are gnarlier, deeper, and they actually hold form a bit better on race day but it’s quite a bit different. 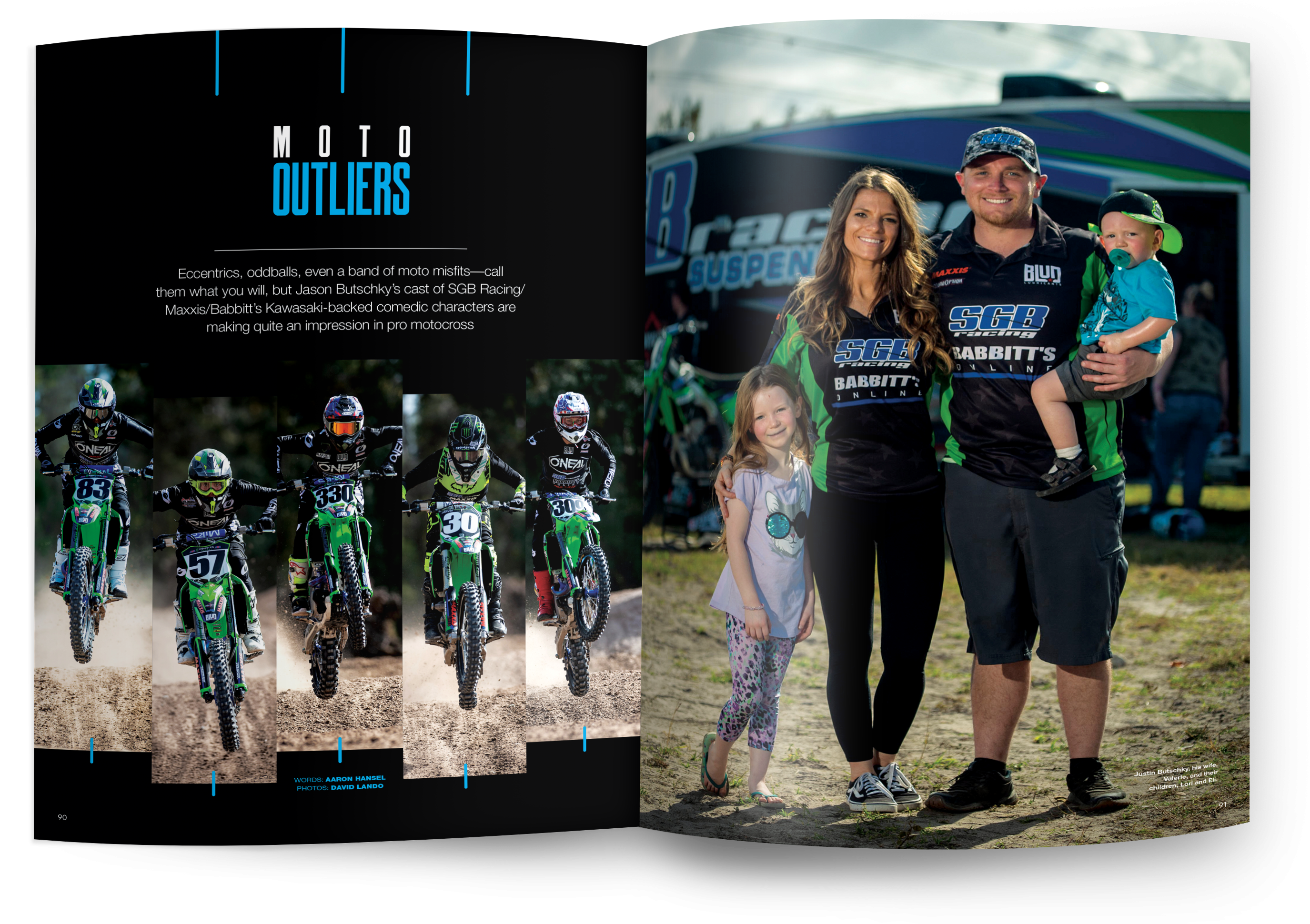 So, talking about riding-wise, you obviously finished the motos so you’re happy about that, but riding-wise do you feel like you’re more comfortable on the bike coming into this season than last year already?
Yes, I am more comfortable. I just—I don’t know. I just didn’t have the fire today. I was just a bit off. But I do feel like my second year on the Kawi, it’s helping, and we’re already moving forward better than last year with the bike. So, I’m stoked. We’ve got a Race Tech engine. That thing is working really good. Jason [Butchsky] at SGB, he did a really great job on the suspension, so I’m happy with it. Just getting through the weekend and moving on to Colorado.

Twelve round series too, there are some tracks that we’re getting to go back to that we didn’t go to last year. Are you excited to go to this more traditional schedule again?
I kind of liked the schedule last year to be honest. I don’t know how I’m going to feel about Southwick. I’ve only ridden a few of these places like once, you know, so I haven’t ridden much of an outdoor season. Last year was a full year. I think last year was the first full year I’ve ever done for outdoors. So yeah, we’ll just have to see how it goes and take it weekend by weekend.

What are you goals actually?
I would like to be scoring points. Top 20 each week is where I would like to be. It was a bit out of reach today, but I feel like with the right tools, we can move forward with that.

We joked all year last year that it was the “Summer of Rodbell”, but is it going to be the “Summer of Someone Else” within the team this year? Can we get a “Summer of Ray”?
I’m hoping that everybody on the team can perform pretty well. We’re all friends on the team, it’s a really light environment. Like last year with [Justin] Rodbell when he was doing so good, I mean, I was pissed at the same time because I wanted to be there but at the same time you’ve got to be happy for the guy. So yeah, we all push each other and it’s a nice environment over here.