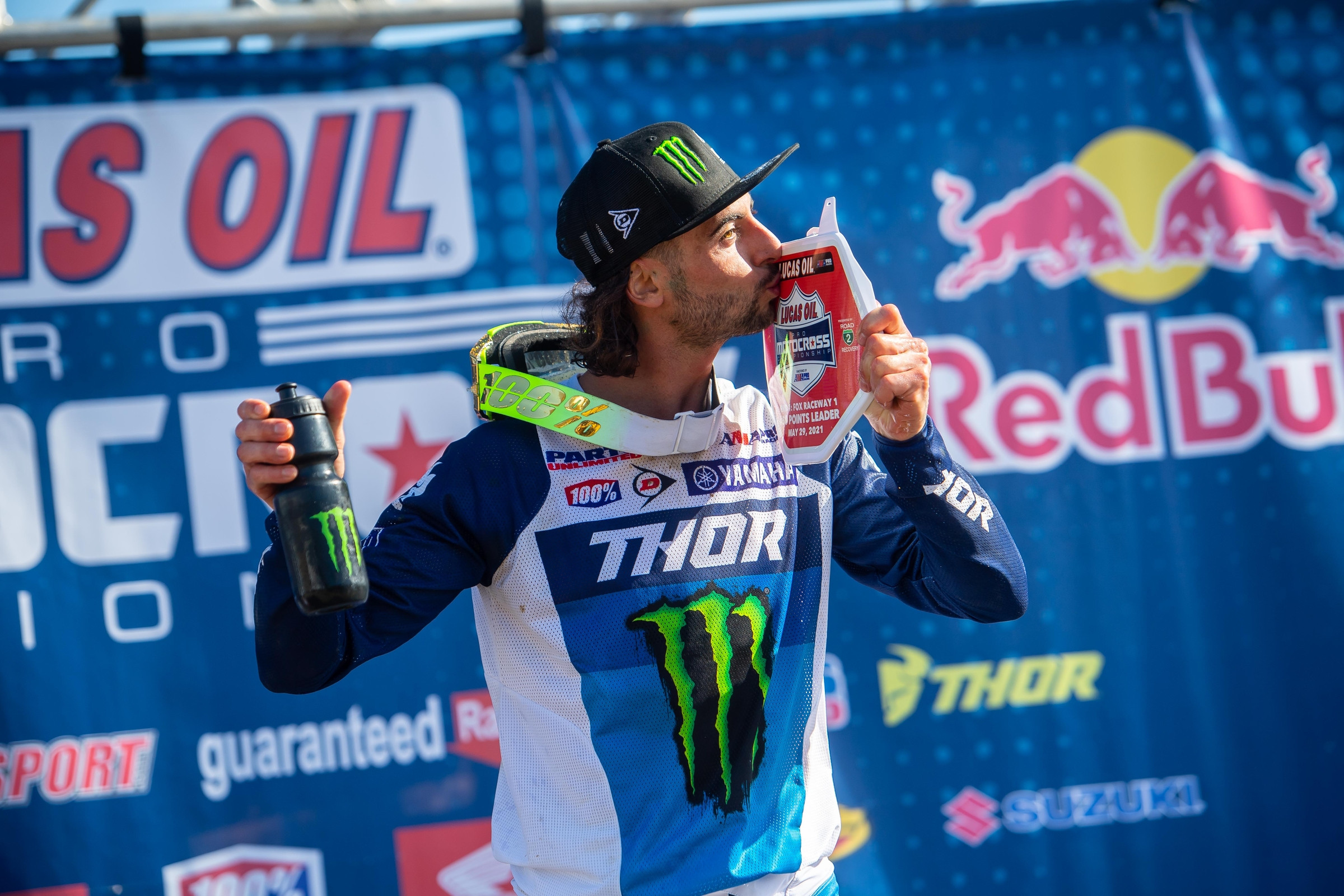 In the preseason press conference for the 2021 Lucas Oil AMA Pro Motocross Championship, Monster Energy/Star Racing Yamaha’s Dylan Ferrandis said he was feeling great coming into the season, but he had no idea where he would stack up against a very experience field of 450 riders. Ferrandis, the 2020 250 National Motocross Champion, would be making his motocross debut on a 450 at the season opener at Fox Raceway in Pala, California. Well, he’s clearly having no trouble adapting to the bike, as he grabbed the overall win. As expected, it was a hotly-contested event, as Ferrandis just edged Honda HRC’s Ken Roczen and his own teammate Aaron Plessinger for the win. And in the first moto, Ferrandis barely held off Honda HRC’s Chase Sexton by 0.099 seconds!

Ferrandis spoke with the media after the race.

Racer X: Dylan, congrats. Really fantastic ride. Now that you have the red plate, does it change your game plan at all going into round two? Or keep going with what you had going into round one?
Dylan Ferrandis: No, it’s always the same. Round two I will try my best and see what we get after the weekend. Like I said before, this 450 field is so gnarly with so many past champions in the top ten or twelve. Anything can happen. It’s going to be normal I think to have a bad day and to be off the podium sometimes for many riders, but we will see. I will try the best I can and try to hold this red plate, for sure.

What was the reaction like from the Star team when you got? Obviously a big result for those guys as well and everybody in your corner.
I think it was a big relief for all the Yamaha people because they are looking for that win for a long time now and giving them that win at round one was really important. I think everybody just had this relief of “Okay, now we’ve got one win and we’re back. We’re back on the top spot.” So I think that was the most reaction from everybody. Also happy to have put so much work in with everybody in the team, but also for me because I'm quite hard with the people in my team for having the best bike and always doing more and always testing more and putting another hour on the track, go in early and leave the track late. I think I’ve been really hard on them the last four weeks and maybe over the last five seasons also. I think it was a big relief just to see all the hard work we spent all the testing and everything, the hours we spent finally paid off.

You had the podium in supercross in the beginning and then the rest of the year you didn’t get back to the podium unfortunately. What are you going to do this time in Pro Motocross now to be able to make sure you get back on the podium and you’re continuing to fight throughout the rest of the season? Are you going to take any different approaches?
I think my podium in supercross I was just at the right spot at the right moment, and the track honestly was so different than normal. I just figured out how to ride that track at Houston 2 and I made that podium. After that, I just felt like my bike setup was the biggest problem. That’s why we worked all supercross season to make the bike better. Now I’m on motocross. I feel like we had more time to get ready. We had more time to get the bikes and we proved it today with having two Yamaha bikes on the podium. So I think Houston was some circumstances and was maybe a little bit of luck or I don't know. It was just a good day for me, and after that I couldn’t find my way on the podium. I feel like today was different. I was on the podium for two motos instead of just one race in supercross, so I already proved it twice. Just going to try every weekend and if it doesn’t happen, I also understand. Like I said, the field is so wide, nobody I think this season can be on the box every weekend.

Did you know that Chase [Sexton] was that close to you at the finish of the first moto when you guys came down right to the last straight?
No, not really. I was trying to manage the gap. I knew we had between three and four seconds. In the last lap I just made some mistakes with lappers. I lost some time. When I was in the last straightaway before the finish I saw he was there and I was surprised a little bit. In the last lap I really missed too much time with a lapper and did some mistakes and bad lines, so kind of my fault a little bit. I was really surprised and I didn’t want to lose that moto. I was still a little bit disappointed he got that close, if I didn’t win I would be so mad for sure.

Dylan, your riding coach, David Vuillemin, is not known for sugar-coating anything. He’s very honest and straight to the point. When you talk to him, did he give you any critique, any negative critique, anything you did wrong today?
Yeah, probably. I don’t really remember right now. Some spots on the track he always tries to compare with the best rider on the track and some places on the track I was maybe slower than someone else. That’s mainly what he does. Nothing too crazy I can say right now.

Below is the full post-race 450 Class press conference: