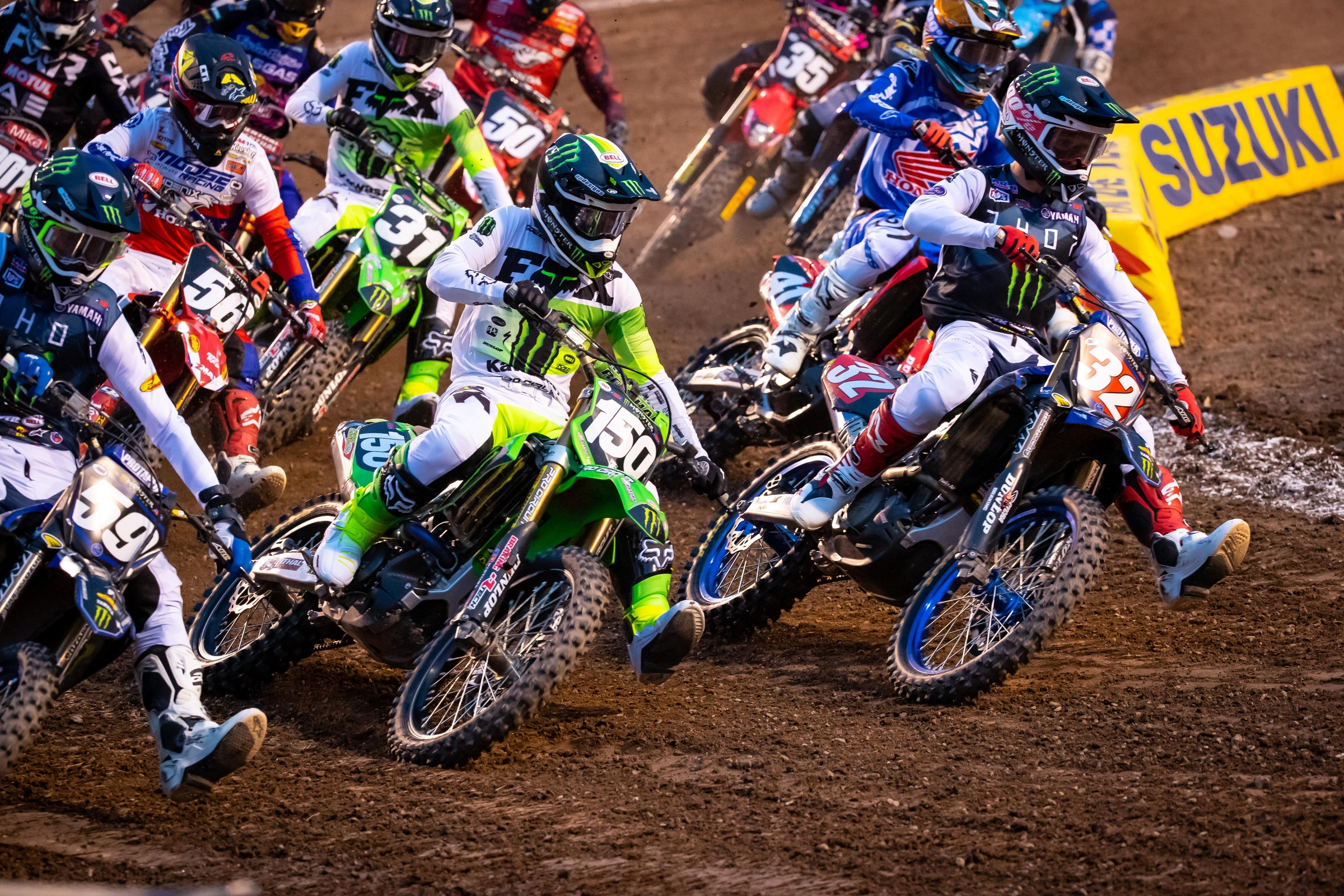 At the end of each year of racing for the AMA Supercross and Motocross contingent, numbers from both classes are tallied together to determine where the following year's career and national numbers. The combining of the points is commonly referred to as the Grand National Championship, but instead of the 1980's concept of one rider winning a blue and yellow #1 for collecting the most combined motocross and supercross points, the GNC now simply exists for number placement.

The career and national numbers for 2022 won't be set until the conclusion of the upcoming Lucas Oil AMA Pro Motocross Championship, but we still thought it might be fun to see where things currently lie now that Monster Energy AMA Supercross is behind us. Let's put on our tin foil hat and speculate! I think you'll find a few surprises.

The simple way to describe career numbers is that any rider that finishes inside of the top 10 in combined points in a single season earns the right to select any available two digit number as their career number. Like, Justin Barcia selecting #51 or Ken Roczen selecting #94, for example. Riders who win a national championship, i.e. the 450SX class Monster Energy Supercross title or either class in Lucas Oil Pro Motocross, can select a single digit number that is available. That's how Blake Baggett ended up with #4 and Jeremy Martin #6, and so on.

So, here's a look at the current top 100 riders in GNC points following the 2021 Monster Energy AMA Supercross season:

The first thing that jumps off the page about this is Colt Nichols. He is currently placed 10th in GNC, and is the only rider currently in line to earn a career number who doesn't already have one. That makes deciphering where numbers could end up next year fairly easy since we just need to know what number Nichols would  pick. Nichols has raced with #13 before, but most people elect to skip it due to an association with bad luck. Instead, riders often select the lowest double digit number available which is currently #18 (Jett Lawrence earned #18 for 2021, but it's not a career number for him, yet, because he wasn't top 10 in combined points last year). So, this is where numbers would stand right now if Nichols selected #18, and the next rider in line (Hunter Lawrence), elected to skip #13.

There seemed to have been some confusion that people believed Jett Lawrence earned a career number last year and selected #18. That is false, as Lawrence narrowly missed landing inside of the top 10 in GNC for 2020 and was instead given the first two digit number available. You will also now notice that Max Miller, who is currently 92nd in GNC, ends up with the last number now. That is because #1 goes to currently champions who vacate their number and #5, #8, and #13 are currently not selected. But also, Blake Baggett, Jeremy Martin, and Justin Hill are currently not in the top 100 although they can elect to use an injury clause to keep their numbers if they do not earn the 25 points necessary to keep it. So, there are seven more numbers currently occupied essentially. If Hunter Lawrence elects to take #13, here's how it would look.

So, the elder Lawrence could choose to take #13 if he wanted to and that would then bump Jerry Robin into the national number range as basically every non-career number moves up by one. The final thing I wanted to look at was if Colt Nichols wanted to take #45 instead of #18. Nichols raced with #45 in arenacross before turning pro and the number seems like a nice fit for a guy named Colt. So, if Nichols selects #45 and Lawrence foregoes #13, this is what we're left with.

So, what did we learn from all this? Well, essentially nothing, because this will all change after 24 motos this summer. Will Nichols stay in the top 10? Will someone jump ahead of him based on a strong motocross season? We don't know, but it's still pretty neat to see where everyone lands after you combine 250SX and 450SX class points from Monster Energy AMA Supercross this year. What's your standout looking at the numbers? Does anyone shock you that they are as high or low on the list? Let us know, and thanks for reading.