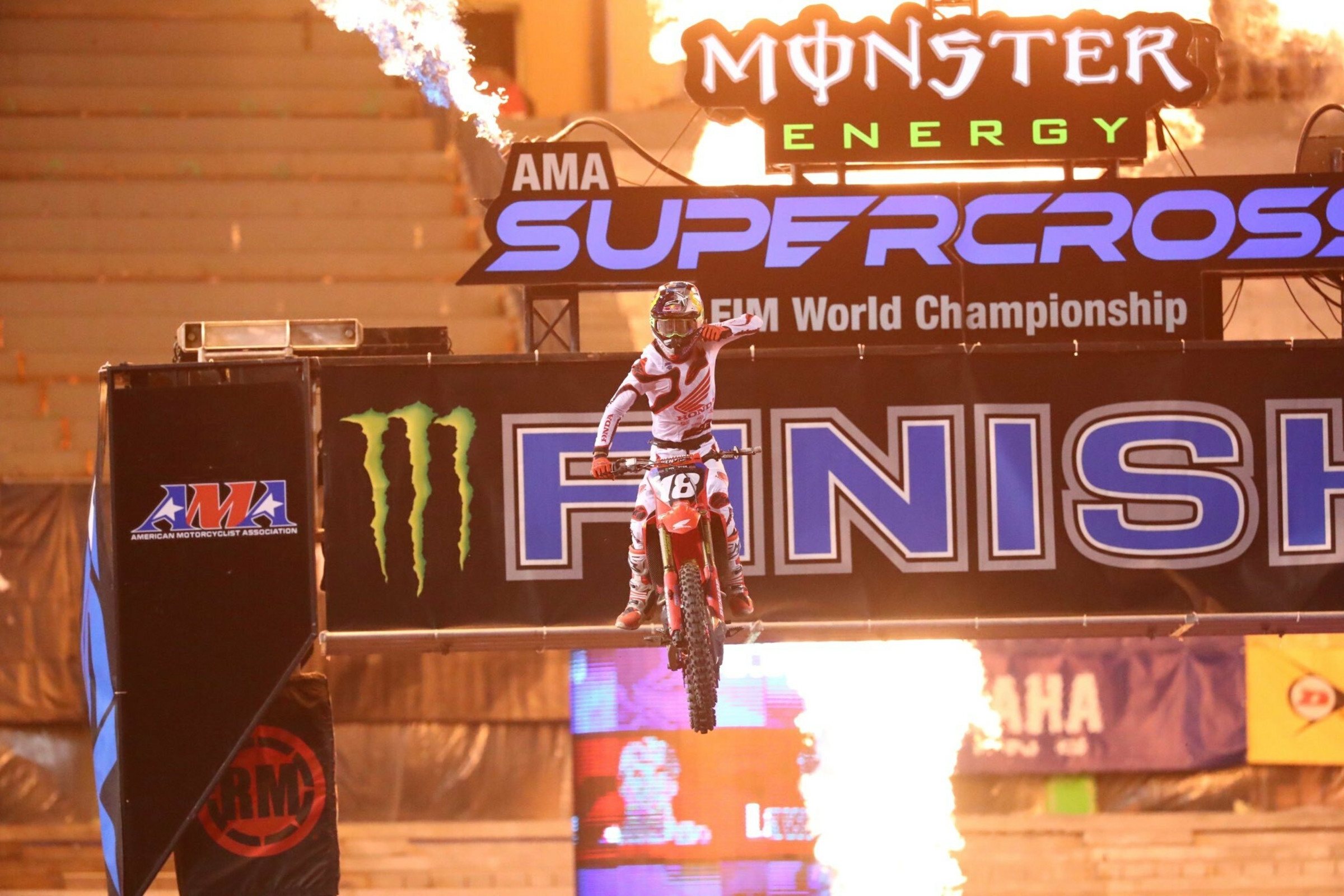 In the 450SX Class it’s hard to imagine any scenario that ends with Webb not winning the title. After all, he was 22 points ahead of Ken Roczen, the only other rider still in contention, and even if Roczen won, all Webb had to do was finish 19th or better. Webb could just cruise around out there and still finish better than that, right? Of course he could, but would he? Of course, he would not. This is, after all, Cooper Webb we’re talking about.

When the gate dropped Webb found himself in second place behind Roczen. Stubborn and determined as ever to win, even with a title on the line, Webb went after Roczen, showing him a wheel and trying to dive inside at every opportunity. Roczen held his ground, and when his teammate, Chase Sexton, joined the fray and started putting pressure on Webb, Roczen was able to gain a little breathing room. Perhaps now Webb would relax and ride this thing out with the bigger picture in mind? Well, Webb did settle in after Sexton blew by him in the whoops, but not for long. When Sexton eventually passed Roczen for the lead it once again put no buffer between Roczen and Webb, and although the gap remained at roughly one second for a while, Webb found his second wind in the latter half of the race. All of a sudden, Roczen’s gap had evaporated, and this time, Webb would not be denied. As the two blasted down the straightaway and headed into the left-hand sweeper, Webb shoved his front wheel on the inside of Roczen, drove forward, and gave Roczen a bump, upsetting Roczen’s machine momentarily. Webb squirted forward while his teammate, Marvin Musquin, took advantage of the situation and also went by Roczen. Any momentum Roczen had, completely evaporated and with the wind no longer in his sails, Roczen seemed to drop anchor. He lost a host of spots almost immediately, and when it was all said and done, he’d dropped all the way back to tenth place.

Up front, Webb wasn’t done yet—he still had another rider standing between him and his eighth win of the season, and in what’s become classic Webb form, the Red Bull KTM rider eviscerated Sexton’s lead in what seemed like a mere moment, went by him and took the win. Afterward Webb credited his mindset as the reason he went after the victory, despite not needing to do so to win the title.

“All week it’s so easy to think about the what if’s. Don’t to this, don’t do that. I was in a great situation with a nice points gap coming in, I think it was 19th or better if Kenny won, so unless something catastrophic happened I had a really good cushion,” Webb said. “I wanted to end the season on a high. I felt like in 2019 I won my championship and my nerves were high, I was stressed out. I learned from that and wanted to have fun throughout the day and enjoy it. It’s not every day you get to win a 450 championship, so I wanted to enjoy the little things.”

“I think in Orlando was the beginning of it, but I think Daytona stamped it,” Webb said when asked if there was a specific point in time when he thought there was a high probability he’d win the 2021 450SX championship. “Seeing the emotions that went into that, I kind of knew right then and there, that I got this guy [Roczen] beat. Obviously anything can happen. The mental side is the biggest part of our sport, in my opinion, so when I saw how things went down there, when I saw his reaction, I kind of knew in my head. I was right where I need to be, right in the thick of points, I was hitting my stride, and I was getting my confidence. I knew from there it was going to be a fight, it was going to be tough, but I felt like the momentum shifted there. It was like, ‘I’ve had this feeling before, let’s go for it again.’”

In the 250SX East division Colt Nichols came into the night in a position similar to Webb’s. He had a big points gap, and finishing twentieth or better was good enough for a championship. But, like Webb, it didn’t prevent Nichols from going for the win, and it’s a good thing he went for it on the start, otherwise he may have find himself collected in the pileup that claimed multiple riders. Instead Nichols nailed the holeshot, stayed ahead of the carnage, and found himself gapping the field early on. A hard charging Jett Lawrence would eventually track him down and take over the lead, but Nichols brought it in for second place to win the 250SX East championship.

“I tried to learn from last weekend. I played it a little too conservative, I got a horrible start [last weekend],” Nichols explained. “I didn’t want to do that again. I was really focused on the start and wanted to get out front and see what happened. Jett [Lawrence] was riding really well, but I think I was holding my own pretty well. I straight up wanted to win that race. I felt solid, I felt strong. I didn’t really know the situation, who was on me, but my mechanic gave me the board and said, ‘Let him by and try to stick with him.’ I had no idea what was even going on, to be honest, but I knew I was probably in second at that point. I tried to make a little bit of a push at the end but I came up short. I really wanted to win that race and I was a little bummed I didn’t, but in the big picture, it was cool to be on the podium nine times out of nine. I just tried to treat it like any other race. I feel like I fumbled a little bit last weekend, and I didn’t want to do that again.”

The title is Nichol’s first as a professional, and is quite an accomplishment, especially for someone who used to race Nationals in Costa Rica to make money.

“I was going to Costa Rica to make $500 a weekend to race to keep me afloat during the week,” Nichols said. “It’s been a road, that’s for sure. It wasn’t the path I thought I was going to take, but it was the path that was meant for me. It built a little bit of character, that’s for sure. It [the championship] didn’t really hit me until I was rolling through the rhythm there at the end. 250 East Coat Supercross champion, that’s a pretty damn cool feeling, and something I don’t want to forgot. I want to come back next year and do it again, that’s going to be the goal.”

Things didn’t go quite as smoothly for Justin Cooper as they did for Webb and Nichols. Yes, Cooper clinched his title without any major drama, but things got a little rocky in his heat race when Hunter Lawrence bumped him off the track in the first turn, causing Cooper to spend most of the heat race outside of qualifying position.

“I felt good all day, and I even got the holeshot in the heat, but Hunter [Lawrence] ran me off the track. That got the heart rate going,” Cooper said. “I just tried to stay calm through that and wanted to go straight to the main. I didn’t want to go to the LCQ. I got the pit board saying I was in P9, and I think I ended up eighth.”

Cooper went on to finish the main event in ninth, which was more than good enough to win the title, although he acknowledged that he didn’t feel the need to push the pace in the main event.

“I didn’t execute the start, I was on the outside, and I didn’t feel the need to get to the front,” Cooper explained. “It wasn’t really a race I wanted to be a part of. There were a lot of battles going on in front of me and the guys were getting pretty aggressive. I hung back, did my own laps, and stayed out of trouble. I knew I was in a good position to win and I didn’t want to throw it away. When you’re mid-pack like that a lot can happen if you’re trying to move through the pack. I was pretty content with where I was. If I’d have gotten a better start it would have been a different story, but given where we were, I settled in and did my laps.”

With that, the 2021 season of Monster Energy AMA Supercross is concluded. Congratulations to all championship and race winners of the season, and to Feld Motor Sports for orchestrating yet another successful season amidst the challenging times of the Covid-19 epidemic. Racing will resume on May 29 at Fox Raceway when the gate drops on the 2021 season of Lucas Oil AMA Pro Motocross.