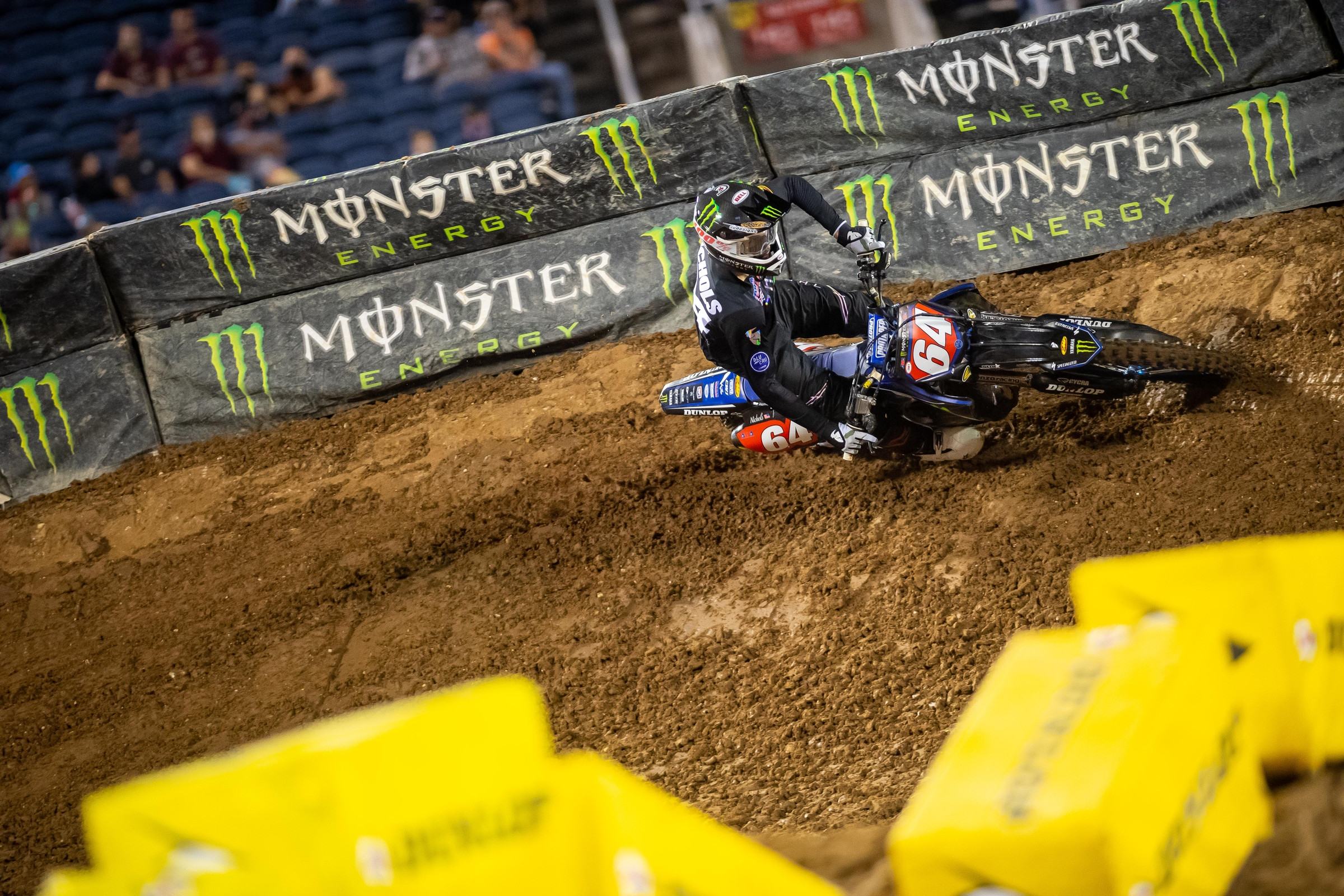 451 South 1400 East, Salt Lake City, Utah, USA. Yes, that’s the address of the 45,807-seat Pac-12 Conference NCAA College Football venue better known as Rice-Eccles Stadium and that’s precisely the place Colt Nichols is about to board a passenger jet and head on over to.

Yes, race fans, the home of the University of Utah Utes will serve as the blank canvas for the final two rounds of the 2021 Monster Energy Supercross Series as well as serving as the proving ground between 250SX East Supercross Championship combatants Colt Nichols and Christian Craig. Separated by a mere eight points with two rounds remaining, the title is Nichols to lose, but the title is also something Craig desperately wants as well. Who will come out on top between the two Monster Energy Star Racing Yamaha teammates over the next fortnight? Good question.

In an effort to get up to speed on what’s about to go down over in Utah, we sought out Muskogee, Oklahoma’s Colt Nichols and started firing questions at him. Always a good sport as well a racer who consistently has something to say, Colt spoke about having his eye on the prize. Check it out.

Racer X: Colt, thanks for taking the time to do this. I know you’ve got to get on the road. How in the word are you this 72 hours before the all-conclusive Salt Lake City rounds?
Colt Nichols: Yeah, doing good, man. Just getting the last minute stuff packed up and ready to go. I’m going to head to the airport in probably 30 or 40 minutes and head to Salt Lake, man. I’m ready to go race again! It’s been a while.

Yes, you’ve had quite a bit of downtime and you’re right there and poised with an excellent shot to win your first professional championship. Has been tough waiting around in “No Man’s Land” for what will be a showdown for this 250SX East Region title?
Yeah, a little bit. It’s weird. Just because that’s the most racing I think I’ve ever done. At the beginning of the whole thing we did seven races in four weeks and then then we had the biggest break I’ve probably ever had. We had 10 weeks off, so it has kind of been like two ends of the spectrum here. We’re all in the same boat, everyone on this coast, so we just tried to use our time wisely and got some outdoor preparation in. Yeah, man, just ready to go for the weekend. It’s exciting.

I’ve been keeping a close eye on you in social media and in the racing media and you appear to be in a good space. You seem really pragmatic and almost have a sort of “steady as she goes” approach to this whole thing. What do you think?
Yeah, it’s kind of weird, man. I’ve been in a really positive frame of mind. Overall, I’ve just had a calm kind of demeanor. Really, even before the season started, I just had this weird, kind of intuition that everything was just going to work out, you know? I’ve just tried to keep a positive attitude and just focus on the task at hand. I think the biggest deal is just focusing on really what’s right in front of me at the time. That’s really helped me this year. Instead of trying to get too ahead of myself and end up stumbling a little bit, I’ve tried to really focus. Man, we’re really just taking it day to day. I mean I’m worried about the next time I ride and focusing on the motos that we have at the track. I’m not really worried about much else. It seemed to work really well and I’ve got a lot of positivity and a lot of good people around me and that’s helping me kind of push through and staying where I need to be, for sure.

Your results in the East have been outstanding with 3-2-1-1-1-3-2 scores in the seven main events you’ve lined up for. Not a single flaw in that arithmetic, huh?
Yeah, that first little run was good, man. I was really, really happy with how we ended things. I was a little disappointed at that last Indy round. I felt like I really had that one in the bag. I got the good start and had that big crash. I fought and clawed my way back to a third place on the night, so that was a real big salvage night for me. I’ve just really tried to put myself in good positions and luckily I’ve been able to do that so far this year. I’m going to try and do that two more times and hopefully be ending this thing with a number one plate. That Indy race was important. That was a big, big race that could have went one direction or another. I was third that night and I scratched and clawed and I was proud of that ride. I left me heart out on the track, really. It was a fun race and I was a little bit bummed because I felt like I could have won that one. I did what I could and did what I had to do that night to keep myself in the points.

Rice-Eccles Stadium over in Salt Lake City. That’s a relatively small stadium and stadium floor. Do you like racing inside that venue?
I wasn’t really prepared to race there last year, but just kind of went there to maybe help Shane [McElrath] a little bit in that championship hunt he was in and stuff like that. I got to race there in five races last year and it was actually good. Now I know what to expect. I’m acclimated to the place and I know how the dirt is going to develop a little bit. I was glad I was able to race there last year.

Do you have a plan developed in your mind’s eye for these two last races in Utah or are you going to just kind of take it all as it goes?
Really, I’m just going to take it as I go. I mean you can try and plan all you want and I can guarantee you that it probably won’t really turn out that way, so I really just want to try and put myself in a good spot like I’ve been doing and stay smart and stay in control of this thing. Overall, I’m going to try and put myself in a good spot and go try to get me another win because that’s the whole goal for this weekend.

Were you and the team been working on your outdoor program during the hiatus, as well?
Yeah, we got a lot of outdoor riding in. I think I’ve done around 25, 26, 27, 35-minute motos already, so I already went through a whole season of outdoors just based off of the moto count I now have. It was good. I got to do a lot of riding and really just kind of take my time with stuff, which is a pleasant change from years past. I really go a big block of fitness in and we got to work on the bike a little it, as well, and that was huge for me. I just wanted to get a little more comfortable to try and make a run at this outdoor thing too. I’ve been staying really focused on trying to win this supercross championship, but I want to establish myself as an outdoor guy and go and try and be a championship contender there too. I’m glad we got a little bit of a head start on.

You’re leading your teammate Christian Craig 166 points to 158 points and right there knocking on the door for your first championship. You’re right there. All of you guys that start out doing all this kids dream to be in this position, huh?
Yes, there’s not much more you an ask for, really. You just want to have a shot. That’s all you really want. After that it’s on me to try and go put it together and that’s exactly what I’m gong to try and do these next few weekends. It’s just a cool position to be in regardless. It’s something that I’ve always wanted to be in. I’ve tried and tried for years and I’ve had my fair share of hard luck and that’s kind of what is pushing me a little bit up to this point. I’ve had some hard times during the past six or seven years. Going from being a privateer to being on a factory team to now being in a championship hunt has been quite a journey and all that makes it that much cooler and that much more special, that’s for sure.

Nothing worth having comes easy.
Oh, 100 percent. I’m trying to be a little bit of an inspiration for some of the kids that maybe don’t have a factory ride straight out of amateurs or whatever the case may be. It’s definitely not been easy, but that makes it all worth it and like you said, nothing good comes easy, that’s for sure.

You and Christian Craig do well with each other and as teammates, but only one guy can win, huh?
Yeah, it has been an interesting dynamic with us just because we are teammates and in the championship hunt, but like you said, only one guy can win. There is a lot of respect there between us. I think we’re a little bit more mature being a little bit older and understanding what is at stake, but also we both don’t want to do anything stupid. We’re older and more mature and understand it and I think that definitely helps with both of us. I’ve raced him clean all year and he’s raced me clean all year. We never really have to look over our shoulders too crazy hard when we are racing each other. That’s been a big plus. It’s been fun, but we are getting down to the nitty gritty and hopefully it is me on the either side of this thing smiling and holding up the number one plate when it’s all said and done. There’s a lot of respect there between us and it has been fun racing him so far.