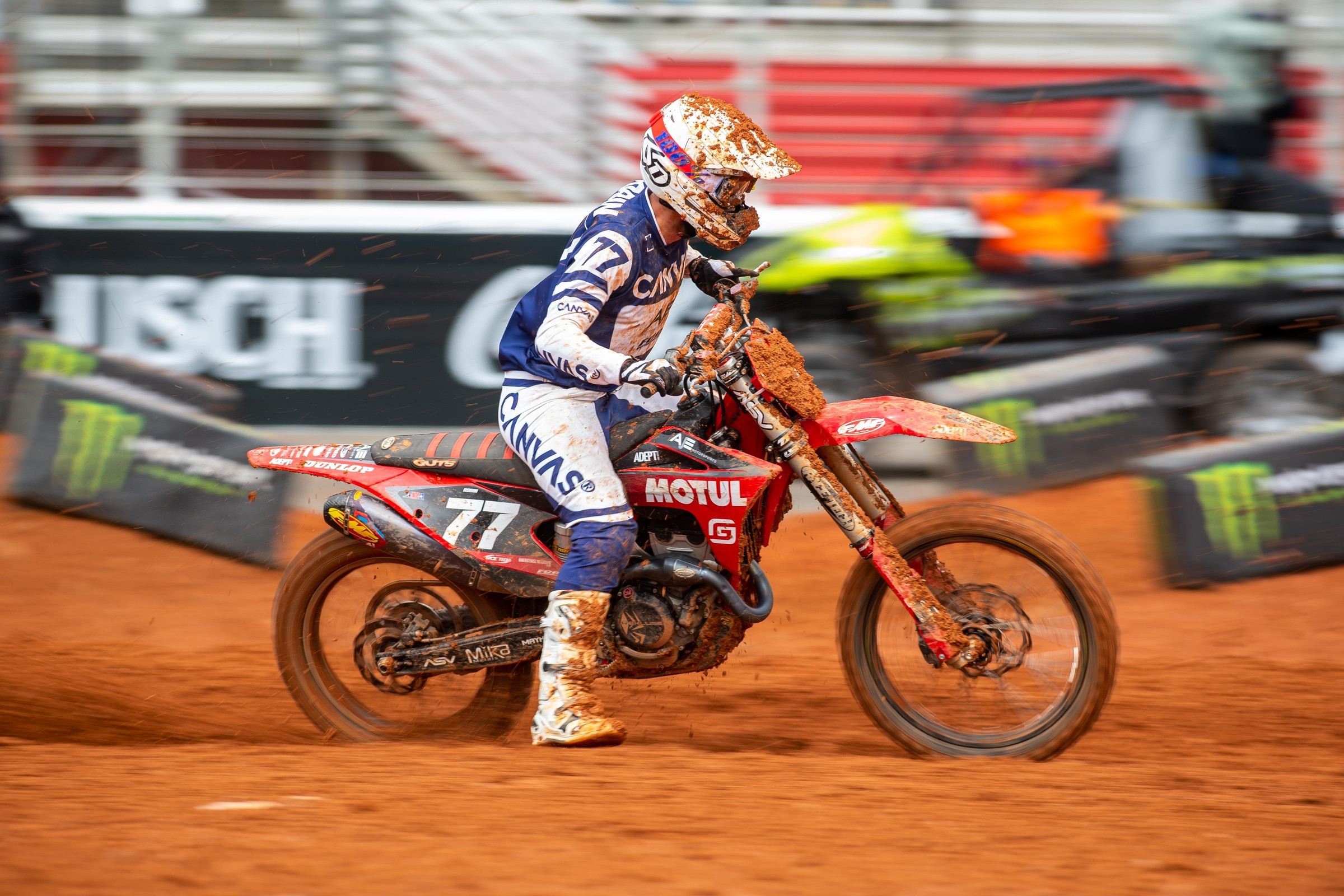 The 2021 Monster Energy AMA Supercross season has not been a great one for Jerry Robin. After getting landed on in the heat race at the opening round, Robin had been healing from a minor AC joint separation while racing each week. The long break before Atlanta was not only a reset for Robin physically, but he also showed up at Atlanta 1 aboard an AJE Motorsports/Motul GasGas for the first time all season. The move appeared to come almost out of nowhere, so we called up Jerry this week to see how it happened and ask his thoughts on his season so far.

Racer X: So how did the whole thing come together with switching to the AJE Motorsports/Motul GasGas team?
Jerry Robin: It’s kind of funny. I had a practice bike here in California and I was just riding that. And me and Ricky Renner had a little deal put together and it was just kind of struggling a bit with money and getting stuff put together with parts and stuff like that, so we came to the conclusion that we weren’t going to go to Atlanta. Stuff came together way too late, and it was kind of a rough go. So, he was like, “Hey, I’ll help you figure it out.” I found that out the Sunday before Atlanta and I didn’t really know what I was going to do. Tony [Eyrich], the owner of AJE Motorsports, I’ve known him for years and I called him and just kind of gave him the rundown. He was like, “Yeah, I have a rolling chassis on the truck.” It was Mitchell Falk’s race bike. They pulled the motor out of that for a spare and I had to supply a motor to race because obviously if I used the spare motor to race then they don’t have one for if Chris [Blose’s] bike blew up or something like that. So yeah, I literally pulled my stock motor out of my practice bike and it had like 40 hours on it. I got it rebuilt by Race Tech and just threw a piston in it and flew with it to Atlanta and threw it in the bike. So, it was like super last minute and it was Falk’s setup to a tee. We literally just set sag and I raced. We didn’t change bars or nothing. So, I just raced what was on it.

Dang that’s super last minute! I thought maybe you got a chance to ride the bike beforehand or something by I guess not!
Oh no! [laughs] We actually started the bike at like 10:30 p.m. at night before the race and yeah, that was it! Like it was kind of a scramble to get everything together, and some parts didn’t show up in time, so we had to throw the bike together. But it worked out. Everything was good, I got graphics in time, so it was really last second and it was a bone stock motor with a pipe.

Wow! Well, you looked comfortable right away. Was it just everything flowed together or were you running off adrenaline of getting this whole thing put together at the last minute?
I’ve used Race Tech in the past so I kind of knew what to expect on the suspension side of stuff, but the bike was generally the same, so it really didn’t feel like I was really hopping on a new bike. Like yeah, it’s red and it has the normal aluminum subframe which is good. I don’t know, I can kind of hop on anything and be fine. I’m not picky. So, for me to just hop on his bike and his bars and whatever, I don’t really care. It doesn’t take much for me to ride a dirt bike. The guys on the team are awesome and it was thrown together pretty quick, but it didn’t take long for me to get used to the bike. It was kind of nice to ride the stock motor because that’s what I practice on during the week. So, I was totally fine with it.

The injury that you’d had at Orlando, where were you at with it coming into Atlanta?
Honestly, what I was struggling with the most were my starts. On the Renner side of things, Munn Racing bought Michael Leib’s race bike from last year, so it was fully done by Twisted Development and the thing was fast! Like it was probably one of the better 250’s I’ve rode. And going from a stock bike to that, I just could not do a start to save my life. And you only get one time on the grate before the actual gate drops. So honestly, the bike was like way too fast for me because of what I ride during the week. I’m just not used to it. So, I was struggling with that and since I got bad starts, I was probably trying too hard on the opening lap every heat. I got into pileups in every single heat race until Arlington 3. I was in like sixth in the heat at Arlington 3 and then I fell and made a mistake that was totally on me. So, yeah it was just a struggle and then you get a bad gate pick for the LCQ and then you’re screwed. It was like a snowball effect, you know. It just kept growing and growing. It was nice to get a break after Arlington and obviously switching back to a bike I’m more used to was easier for me to feel comfortable and confident on the start.

How frustrating was it for you then in those times where you weren’t getting a good start, or you were getting caught in those pileups? Last year, I feel like you were a different guy, being more consistent. Maybe you didn’t feel that way, but how frustrating has it been to have the speed and know you can run that pace, but it just wasn’t working out?
Yeah, honestly when stuff starts going on like that, you start looking at other stuff that’s probably not even a problem with your actual riding. My mechanic and Ricky Renner were all like, “Oh, what’s wrong? We’ve got to figure out something.” And then we try a bunch of stuff and it’s almost like you go backwards even more trying to fix something that’s not actually a problem. Once that’s starts, a lot of times it’s hard to stop it. I think that was mainly the problem. I mean, I had a couple of rounds there where I qualified like 13th or 14th, but then I didn’t even make the main. I feel in the last year, like you said, I’ve been more consistent. Maybe I haven’t been as good raw speed wise, but I feel like lap after lap that I can run the same pace. So, I’ve gotten better with that but that’s why it’s frustrating to qualify like top 15 and still not make the main because I really felt like I had some good rides in me. Even like at Atlanta 3, I was in eighth and my rear brakes went out. I don’t exactly know what happened to the brakes system, but it was spraying out fluid everywhere and nothing was loose. I don’t really know what happened yet but that’s a bummer. I mean, it’s racing though. It is what it is. We’ll see how Salt Lake goes. It’s the finale, so it’s going to be pretty tough to put it in the main, but we’ll see.

What did you think about Atlanta Motor Speedway? The track was gigantic at all three rounds and probably a bit faster than you guys have ridden outside of Daytona, but what did you think?
It’s actually surprisingly way different than Daytona. Like yes, it’s still a speedway, but they built stuff huge. Like the first track design, I think they tried way too hard to overbuild it. You can probably ask a majority of the guys who raced it and they would say they were intimidated by the track at the first one. Dude it was gnarly. So, they tamed it down a little bit at the second one, but you’re just going really fast. And like, to put in sand sections here and there, supercross suspension doesn’t really work that well on stuff like that. [laughs] To go fourth gear wide open into a sand section like that, it is a little bit intimidating. But all in all, I found it made for good racing.

Yeah, it seemed like it! It seemed like there was more time to set someone up through a long rhythm lane than you normally have.
Yeah, totally! And at the last Atlanta where [Cooper] Webb passed [Ken] Roczen, I mean he gained a second on him by just overjumping the doubles. So just doing something like that where on a normal supercross track, you’re lucky to make up two tenths. So, it was pretty cool in that sense because it was a pretty good hybrid of outdoor feel and supercross. I think they did a good job.

I wanted to ask you about training out west this year. Maybe in the past you would have trained more in Florida or something like that. And this year has been maybe the strangest in terms of different types of tracks and dirt that you guys have gone to. Like Atlanta was basically three different dirt types there alone because of the rain, the heat, and stuff like that. Daytona is always unique too. So how challenging has it been to train on hard packed west coast dirt and then go race these different types of soils on the weekend?
It’s tough man. I really thought we were going to race three races in Phoenix at the beginning because that was originally the plan and that would have worked out perfect because Phoenix is hard packed. I always love Phoenix, it’s really fun to me. So, I was really looking forward to it, and then when it got cancelled, I was like, “Oh man, this sucks!” Then you’ve got the three-hour time change and it’s hard to get used to that alone when you’re trying to race and, I don’t know, it’s just been kind of weird. It’s not too difficult to get used to the dirt, I think. I’ve always like outdoors and I never really have a problem switching from dirt to dirt. I think it would have probably been better to be east coast this year just because Atlanta was kind of hard packed, but it was still rutted. But like, most of the tracks had a really east coast feel because, I mean, the only round that was an actual west coast race will be Salt Lake City. I think it would have benefitted me more to be east this year, but a lot of people thought that too. West coast guys are like, “Man, it’s tough to go race an east coast race like Daytona.”

Who would you like to thank for getting you to the races this year?
I’d like to thank Cory [McFadden] at FCC, my parents, my family. Tony at AJE. The whole crew there. Thanks to Ricky Renner as well, and to Motul, GasGas, 6D, 100%, Canvas, Alpinestars, Mika Metals, and Dunlop.