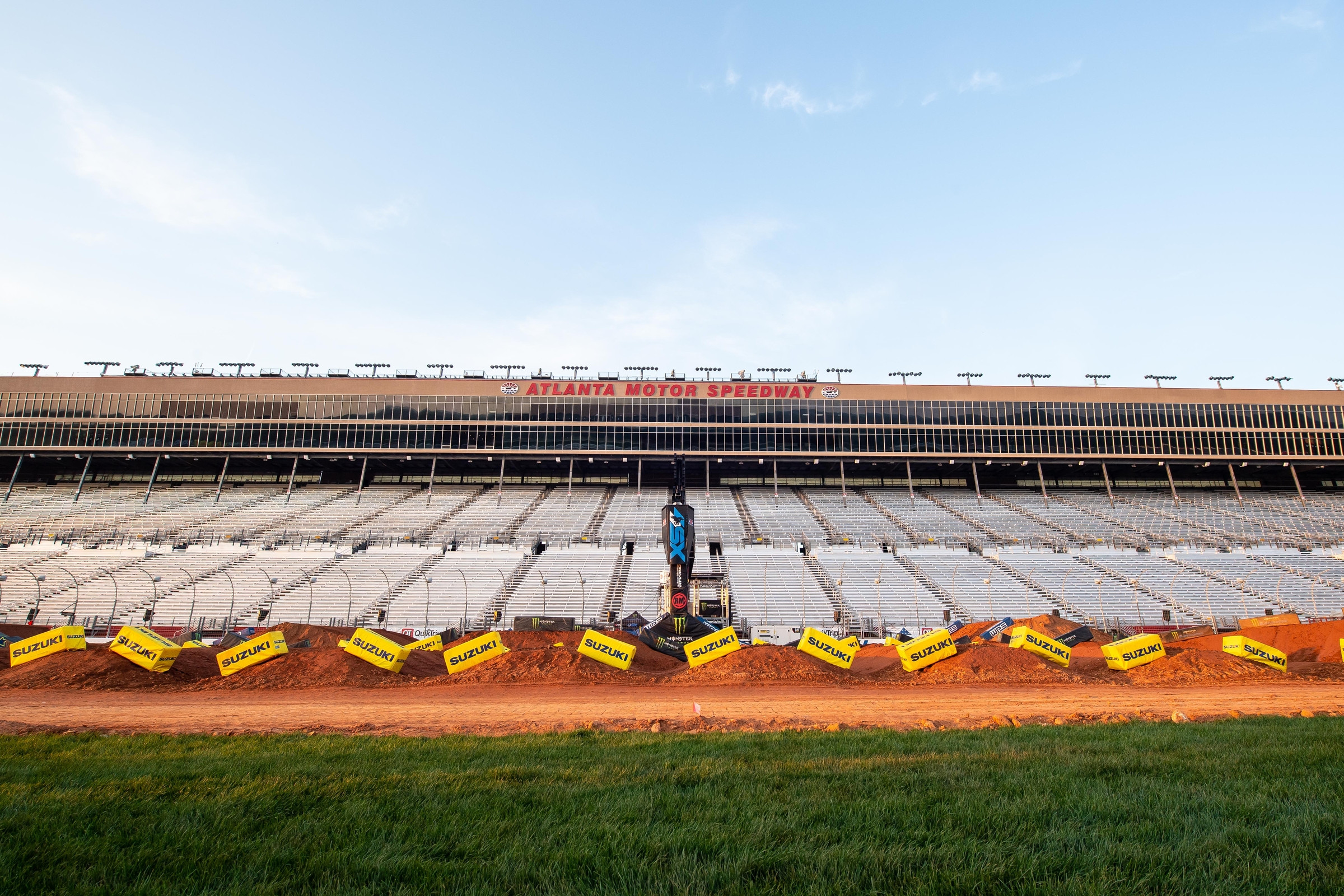 Atlanta Motor Speedway presented a unique look for Monster Energy Supercross for multiple reasons. Not only was the track bigger and faster than the usual stadium supercross, but the three-races-in-one-week program is still relatively new, and also comes at a very vital stretch for championships.

The big track and championship drama led to three exciting events. What did our staff like most? Here are a few opinions.

My favorite part of the Atlanta residency was the dirt. First, the amount of available dirt allowed Dirt Wurx to be creative in design and execution. The jumps were huge, the berms were tall, and the options were endless. Second, the orange Georgia clay could be the best dirt on earth. I raced on this dirt fairly regularly growing up and always enjoyed it. It offers great traction and absorbs moisture well. It's very predictable and allows for aggressive racing. I can't imagine anyone that raced these Atlanta rounds would argue with me saying this was the best dirt of 2021.

- I really enjoyed the length of the track and the options that it gave the guys. We had over/under bridge, two sets of whoops, sand, rollers, big-ass doubles. It was great! As I wrote in my OBS column a while ago, there have been more sub-50 second lap time tracks the last two years than there had been in the previous five years. Count me out on the 44 second tracks in the domes where everyone jumps everything on the second lap of the first practice that we've been seeing this year. As JT mentioned, the dirt in Atlanta was free and so it was plentiful! I loved the length of the track, it was exciting, it produced less lappers, the guys got to use the power of a 450 and it was pretty cool all in all. Oh and Cameron McAdoo, he was my favorite part of Atlanta also because he entertained me. A lot.

So many good things to like about the trio of races we just had at Atlanta Motor Speedway. Any chance the sport has to try something new or stretch the boundaries without being gimmicky and staying true to the core values of the sport, I'm all for it. That said, it wasn't the speedway venue or the gargantuan track that stood out for me--it was Ken Roczen on Tuesday night. I'm not rooting for anyone in specific to win this championship, I just want it to be exciting all the way down to the wire, and before Atlanta 2, I think it's pretty safe to say most people were starting to think a Webb 450SX Championship was the likely outcome following the seventeenth round. I'd be lying if I said my interest in the title chase hadn't started to wane. That all turned around when Roczen came out swinging hard on Tuesday. He looked like the Roczen from Indianapolis, or like the guy we'd been waiting to mount some sort of counterattack to Webb's merciless onslaught we'd been watching. Well, he was finally here, and combined with an off-night from Webb, the points took a huge swing. In an instant, the battle for the championship, re-intensified, was back on center stage in my mind. Of course, Webb shut all that down on Saturday night, but hey, for a glorious moment, this championship was starting to look a boxing match in which both fighters were beginning to let loose with a furious flurry of punches as the clock ticked off its final seconds. And hey, that's all you can hope for in this sport!

The drama. The season is coming to a close and the Atlanta trio delivered as it should. We saw plenty of riders putting in mega efforts to keep hopes alive. Cameron McAdoo's Tuesday and Saturday marked the wildest five-day span for any rider in supercross history. Some think he flipped from hero to hazard from Tuesday to Saturday, and now opinions are all over the map on if this was a good thing or a bad thing. One thing everyone can agree on is that it all stemmed from McAdoo's desired to win a championship. Then you had Ken Roczen getting back into the battle (as Hansel mentioned) followed by a mega-effort from Cooper Webb to stop that momentum. Also, young riders like Aaron Plessinger and Chase Sexton can sense that now is the time to get a 450SX win, and they were in the mix throughout the trio. Jason Anderson senses it, too. In the past, a lot of guys are set in their positions late in the season. Not the case this time--the effort and intensity level to get these wins and points looks every bit as high now as it was in January. It was awesome.