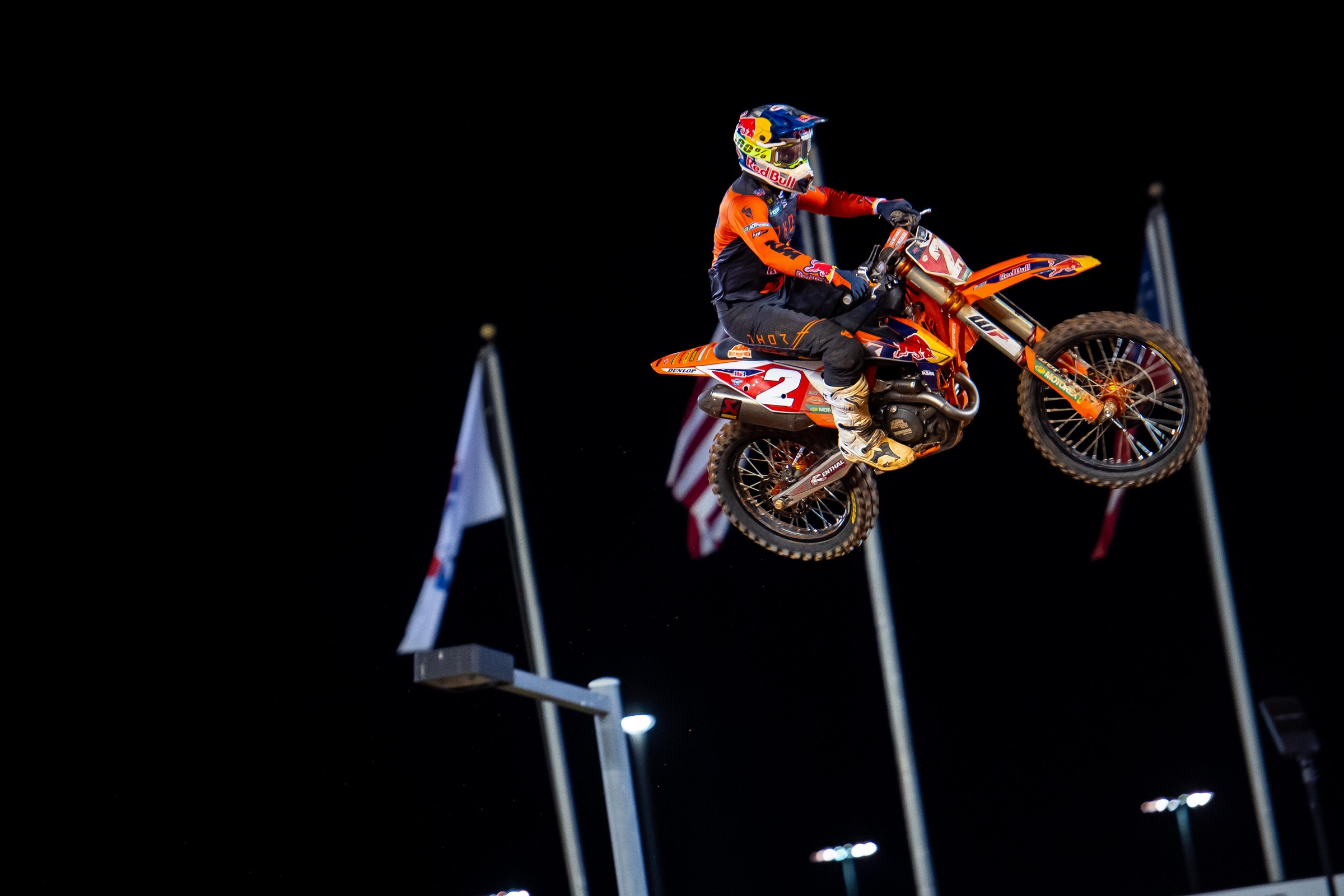 Cooper Webb stemmed the budding momentum from Ken Roczen in a huge comeback effort on Saturday night at the Atlanta 3 Supercross, capitalizing on Roczen’s crash in the whoops to put in a huge charge and get to the lead. Notably, Webb took a big risk by blitzing the whoops at the end, while his competitors had to resort to jumping. Webb is normally one to go to the jump line, but with championship points oh-so-valuable, he went all out to get the win.

Cooper talked about it after the race in the post-race press conference.

Racer X: Cooper, good ride. Just take me through those last five minutes or so. The switch kind of came on there. Is it like when you saw Kenny [Roczen] had those issues, is that what kind of woke you up?
Cooper Webb: Yeah. It changed a lot. It kind of changed the dynamic. He had a good lead. I could see when I was entering the whoops he was exiting them. I saw a few laps we were all struggling. They were extremely tough to get through all day, especially in that main event. I think we were all kind of searching for lines and what to do and what not to do. I could kind of see that and kind of was just trying to click my laps. I was making some mistakes early on. Really just over-riding and trying too hard and kind of lost some ground. Had AP [Aaron Plessinger] and Eli [Tomac] back there behind me too, ready to pounce. When I saw he [Roczen] went down, I felt like I had a shot to win the race. Just really put my head down and that’s when I kind of figured out the whoops and was able to get through them pretty good there at the end. Obviously a late-race charge. It was definitely a tough race. The track was really gnarly. Stoked on it, to be honest.

We think we know what we see when we’re watching practice. You had I think 2.2 seconds between you and [Jason] Anderson who was the fastest qualifier. We’ve seen you pull this off before, but even that looked like a really big bridge to cross. Are you worried at that point? Did you go into the night show thinking, I’ll sort this out?
Today I actually felt pretty good. The last couple I’ve been off the pace quite a bit. Today in qualifying I had a few issues with getting laps and whatnot but I felt pretty comfortable, pretty good in the whoops, pretty good everywhere else. After the heat race I felt like I rode good. I got a good start. When I was able to ride with Jason [Anderson] and kind of see and pick up on some things he did, that helped. For the main, I felt like the conditions changed quite a bit. I think it was more hard packed than we’ve had it these last few. Obviously the whoops were extremely tough breaking down and stuff. I felt confident, but you never know. The way the track was and the way these races have been, there’s a lot of fast guys and a lot of guys stepping up to the plate, so you never know what’s going to happen.

The whoops tonight were the toughest I think we’ve seen. Do you guys prefer them that way? Is that what you’d like to see moving forward?
They were for me by far the toughest whoops I’ve ridden probably ever. So it was definitely tough. It definitely separates. As you can see when you get them right it’s key and when you don’t it’s tough. They broke down like crazy from practice to the heat. It’s just such a change when we get to the main event that it’s tough to read.

You weren't happy with the results on Saturday and Tuesday. I know it was all hands on deck with the KTM team testing in Florida. What did you guys find?
Like you said, the first two I honestly struggled. This track has been a lot different than a normal supercross track. It took some adjusting and some changes that needed to be made. We did a shock change and a triple clamp change that really helped. I was just appreciative because Roger [De Coster] and those guys drove from here to Florida for a day of testing. Just to have that commitment from the mechanics and suspension guys is pretty cool to do whatever it takes. As you saw, it was a lot better result tonight.

What’s more satisfying for you—the fact that you were able to overcome a big gap in the main event to catch, obviously Kenny had his mistake, or the fact that your championship lead is now out to 16 points?
Obviously I think the biggest thing was the turnaround from Saturday. Obviously I got kind of a gift a little bit tonight, but I felt like a solid second was on the table. Then obviously it’s rewarding when you kind of have that opportunity to win, and to be able to do that is super rewarding. Points are always clutch and always key, especially moving forward and as we get later into the season. I think just those moments of digging deep and accomplishing the ultimate, which is winning, is pretty hard to beat.

They’ve talked about whether the stadiums are almost too small to contain the 450’s anymore. What do you think of the longer tracks and the more options that they get out of a venue like this?
I enjoyed it. Like we already said, I struggled, but it’s definitely a lot different. Hitting fourth gear on supercross is pretty gnarly, especially just for our settings are so much stiffer than a motocross setting or whatever when we’re going high speed. So it’s kind of a fine line. I feel like when they brought the sand and stuff like that at high speed, the setup is so tough. You have sand rollers that you need it softer to be able to go through, but then you have the gnarliest whoops that we’ve had in a long time. I think that’s what moving forward if they could maybe tame that a little bit. The middle sections I thought were really cool. They tried to slow it down as much as they could. I felt like this place had more room than say Daytona and could go wider. I’d like to see the outdoor stadiums but maybe just try to keep us out of fourth gear. I did think it was a cool change of pace. Usually third gear is all we really get. So, it’s definitely a lot different.

You mentioned the tough whoops. Can you talk about the decision later in the race to switch to blitzing instead of jumping?
To be honest, I kind of knew that was really my only opportunity to make the time up. As we saw, Ken was super solid tonight. Just kind of knew if I want a chance at this I’m going to have to hit these damn things. So the last five or so laps really actually was probably the best I hit them the whole night, which was pretty cool. That was basically the decision. I felt like everywhere else we were so close, late in the race anyway, and that was going to be a place to make up a chunk of time if you could execute. If you try to blitz them and you mess up, then you were really losing. I think it was one of those things where you kind of got to go for it.

Going back to Tuesday, losing a significant amount of points, we know you kind of feed off the sort of stuff that doesn’t really work in your favor. With the media sort of hyping up saying, “Cooper is losing all these points,” is that the stuff you use to motivate you going into this?
Oh, 100 percent. In racing you’re on top one weekend and at your lowest the next, and especially within the hype or the media or whatever you want to call it. I feed off of it. It’s not a great feeling. I’m sure a lot of us know. If you’re struggling, you have a bad results, it kind of weighs at you. For me, I always try to use it as motivation and use it to get better. The points got tightened up and it was like, your back is against the wall. What are you going to do? Are you going to settle for fifths or whatever or go for it? So I think it was a good eye-opener, a good lesson learned. Like you said, I definitely feed off that. I like proving people wrong, I guess.

Was there ever a point tonight when Kenny had stretched out the lead that you were considering the championship and maybe trying to play it safe, or were you just going for it the whole time?
I was trying the whole time. It’s always in the back of your mind a little bit, but I felt like a second was achievable no matter what. Obviously things change quick in racing. When the mistake happened, at least I just kind of shut that off and just was going for it. It’s tough as you’re getting closer to the end. As you race in general, you’re kind of always thinking about points. I think that’s what makes it good is when you’re able to block that out and just go for it.

After a race like that, are you super red-lined heart rate at the end? Is it actually fatiguing? These are long main events. The whoops are gnarly. There’s pressure. Is it actually exhausting, or is it all just a mental and strategy thing?
Our sport is gnarly, man. It was super tough and definitely digging deep. It was a really hard main event. At the end, it’s nerves mixed with excitement and red lining—blacked [blacked out] you could call it. It’s never easy physically. That’s for sure. That’s part of our sport is being able to suffer, and we definitely suffered tonight.

If it wasn’t Kenny up front, if you were just in second and another rider was up there, would you have taken those chances and blitzed those whoops those last couple laps?
Yeah, I would like to think so. I think tonight I was racing instead of focusing on not [crashing]. I think it’s easy to try to manage the championship, but at the end of the day you’ve just got to put it behind you and focus on executing. That’s what I felt like I did tonight. As a racer, you want to win every time you’re out there and you don’t always get to. It’s important to make your good nights good and your bad nights the best you can. I think whoever it would have been, I was ready to try to go for it and do the best I could. I try to race hard and go as hard as I can whatever the situation is.