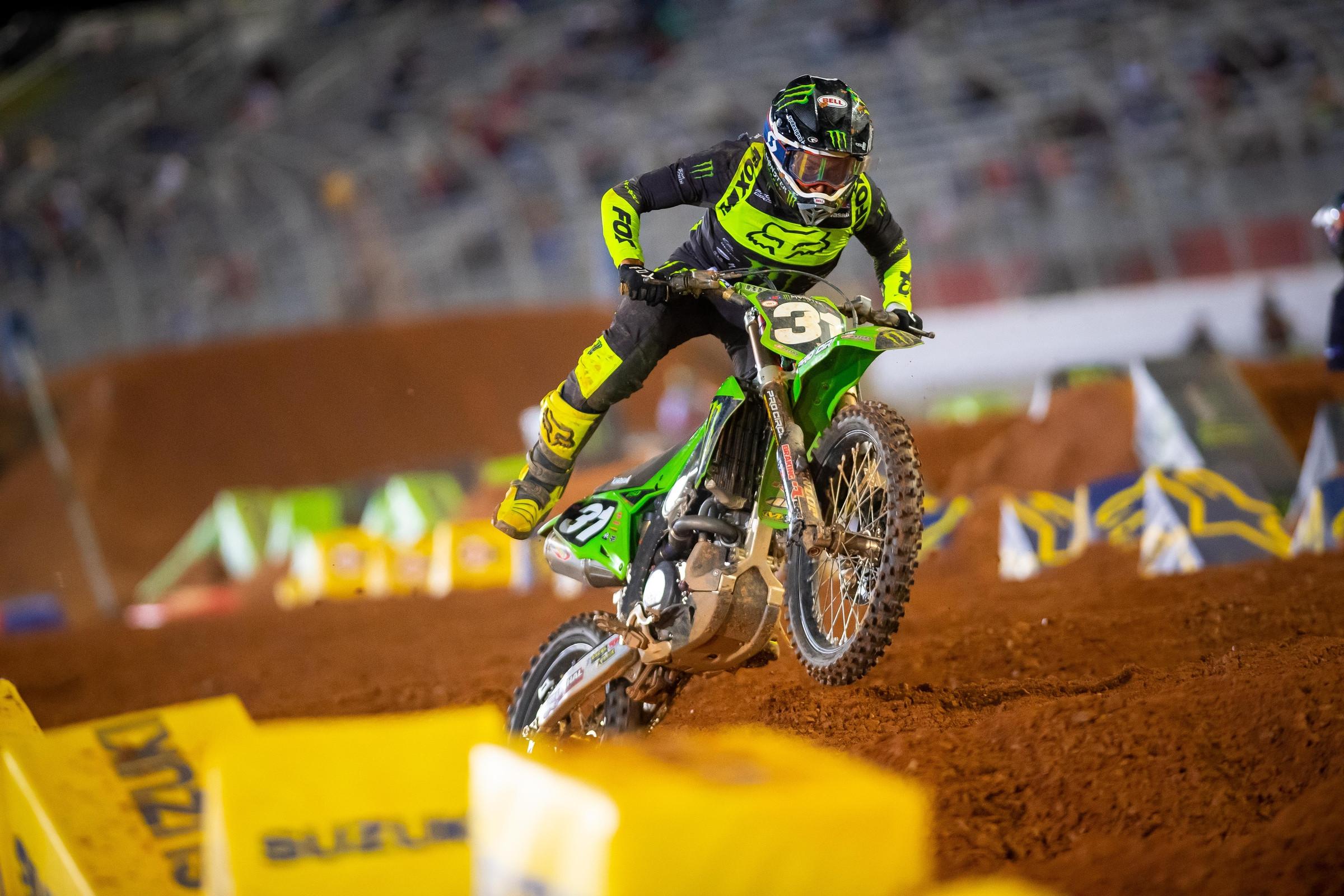 Cameron McAdoo's Tuesday ride to the podium was pure hero stuff, as he recovered from one of the most spectacular crashes ever seen in Monster Energy AMA Supercross to gut out a third-place, thanks to a lucky break that saw him line up for the restart after the race was red flagged and restarted. For him. The rulebook doesn't prevent a rider from lining back up for a full restart, so McAdoo took full advantage to stay in the title fight against Justin Cooper and Hunter Lawrence.

McAdoo was back to take more hits, and get back up, on Saturday, but at some point the action switched from hero to hazardous. McAdoo just kept taking hits, which resulted in more bruises for him and also collateral damage for others. Not every incident was his fault, but it was painful to watch, nonetheless.

A quick rundown of McAdoo's Saturday: A massive, massive crash in practice where he was throw off of his bike while launching a triple. He doubled the jump...without his bike.

In the main he tagged a tough block and bounced toward the center of the track. Motul AJE GasGas rider Chris Blose had nowhere to go, clipped McAdoo and went flying. The huge hit left Blose laying motionless on the track. We have heard Blose suffered a concussion and an arm injury. It was quite scary.

The race was red flagged and restarted, and McAdoo once again lined up. On the first lap, McAdoo got sideways in the sand rollers, then recovered and moved left to protect his position. He ended up cutting in front of Hunter Lawrence, leaving Lawrence with nowhere to go and straight into a tough block. He crashed.

Later, Seth Hammaker got sideways in the whoops, McAdoo tried to slow down to avoid a collision and went over the bars. Pierce Brown got collected in the mess.

This collection of incidents, and the collateral damage, have caused some to question why McAdoo was allowed to race at all. However, arm-chair concussion analysis isn't nearly as accurate as the analysis performed by the actual doctors at the track, such as Dr. Reiman, who has become of the foremost experts in sports concussion science. The Alpinestars Medical team has held multiple riders out of multiple races for concussions. They're aware of what they are and the safety dangers they cause. McAdoo might have been riding hurt on Saturday, but riders have lined up for supercross races with torn ACLs, sore wrists, and any number of injuries. That's sports. Without any proof that McAdoo was suffering from head trauma (and it's ludicrous to think the on-site medical team would simply look the other way after one of the wildest crashes in supercross history) there's no precedent or cause to force him to not race. McAdoo's never-surrender style and all-heart riding has been both a blessing and curse throughout his career. The incidents on Saturday were the result of him pushing the limits as he usually does. To assume McAdoo ran into trouble because of a concussion ignores all previous evidence. He pushes, he charges. Sometimes it goes wrong.

This culminated in one more wreck. Garrett Marchbanks took McAdoo out with a vicious block pass. This one was completely on Marchbabanks. TV analyst Ricky Carmichael said the move was "uncalled for." It's not difficult to connect the dots here, as Marchbanks was teammates with McAdoo for Monster Energy/Pro Circuit Kawasaki last year, but the team chose to bring McAdoo back and let Marchbanks go. Marchbanks now rides for the ClubMX Yamaha team, a capable outfit, but not a full-factory squad. It's very easy to believe Marchbanks' block pass, which left both riders on the ground, was powered by jealousy.

On Monday morning, Marchbanks' ClubMX team sent a statement to explain Garrett's side of the story.

Club MX ATLANTA 3
THE HIGHS AND LOWS OF SUPERCROSS

The main topic for the team tonight was the Marchbanks/McAdoo crash and although it was not good for either rider , he was not intending for either of them to hit the ground.

Speaking to Marchbanks this morning, he said, “I felt very good in qualifying, and running upfront in my heat race with the leader. As we got off to the first main, another red flag restart and more crashing is something no rider wants to be a part of. I found myself in the back on the restart and was trying to work my way forward, very frustrated with myself. The 31 was riding erratically all night and at that point in the race he was next on the track to pass. I fully intended to make an aggressive pass and get away quickly, not wanting to ride near him. I thought I was closer than I was after I landed the double. I wanted to get under him and stand him up in the bowl turn, then be clear of him before we got to the next section. That clearly didn’t work. I miscalculated my angle, then pushed the front tire all while having no chance of pulling it off. What a mess. I’m disappointed and sorry that it happened. I take full responsibility for the incident and should not have allowed my emotions to get the best of me. I should have just waited until we got to the next section to pass even though it was one line for the majority of the following lap. I have gone the whole season fighting at the front with no issues and I feel like people know I’m a clean racer. Yes, I have a lot to prove and I think I’ve done that all year but it’s never been at someone else’s expense – that’s not how I ride and time will show that as I continue to improve my race craft and decision making.”

Team Owner Brandon Haas followed up the conversation with, “We’ve had conversations as a team all season about our goals and aspirations. We talk about integrity, hard work and commitment. We also talk about our brand and the public perception of it. Garrett’s move on McAdoo was a poor choice and we will make sure he learns from this. He’s an aggressive racer and wants to be at the front. If people think he has something to prove with the PC team, that is simply not the case - that was done and over with at round one. Even though we continue to hear on the broadcast that Garrett has a “chip on his shoulder” or that he has a vendetta in mind that is simply not true. It makes for good TV but the fact remains that he is happier at ClubMX than any of his past teams and his results will show that. We have a goal to stay healthy and get a full year under his belt, even if that means not winning races. We have remained healthy and consistent, which was our primary goal and the McAdoo case was simply poor judgement. We will learn from this to help Garrett grow and mature.

"People may think that ClubMX is just a stepping stone until he can return to a factory team – also not true," said Haas. "In early April, Garrett re-signed a long-term contract to ride for us well into the future. There are dramatic moments in the sport that get everyone’s attention, and as a team we work together with all of our athletes and personnel to learn and improve from these experiences. We are not buying results; we are building these guys up on and off the bike. The burdens that come with that I'll happily accept regardless of what anyone has to say about Garrett or ClubMX. He’s sorry that it happened the way it did, we’re all sorry. We never want to disrupt someone’s bid for a championship – that’s not how we operate."