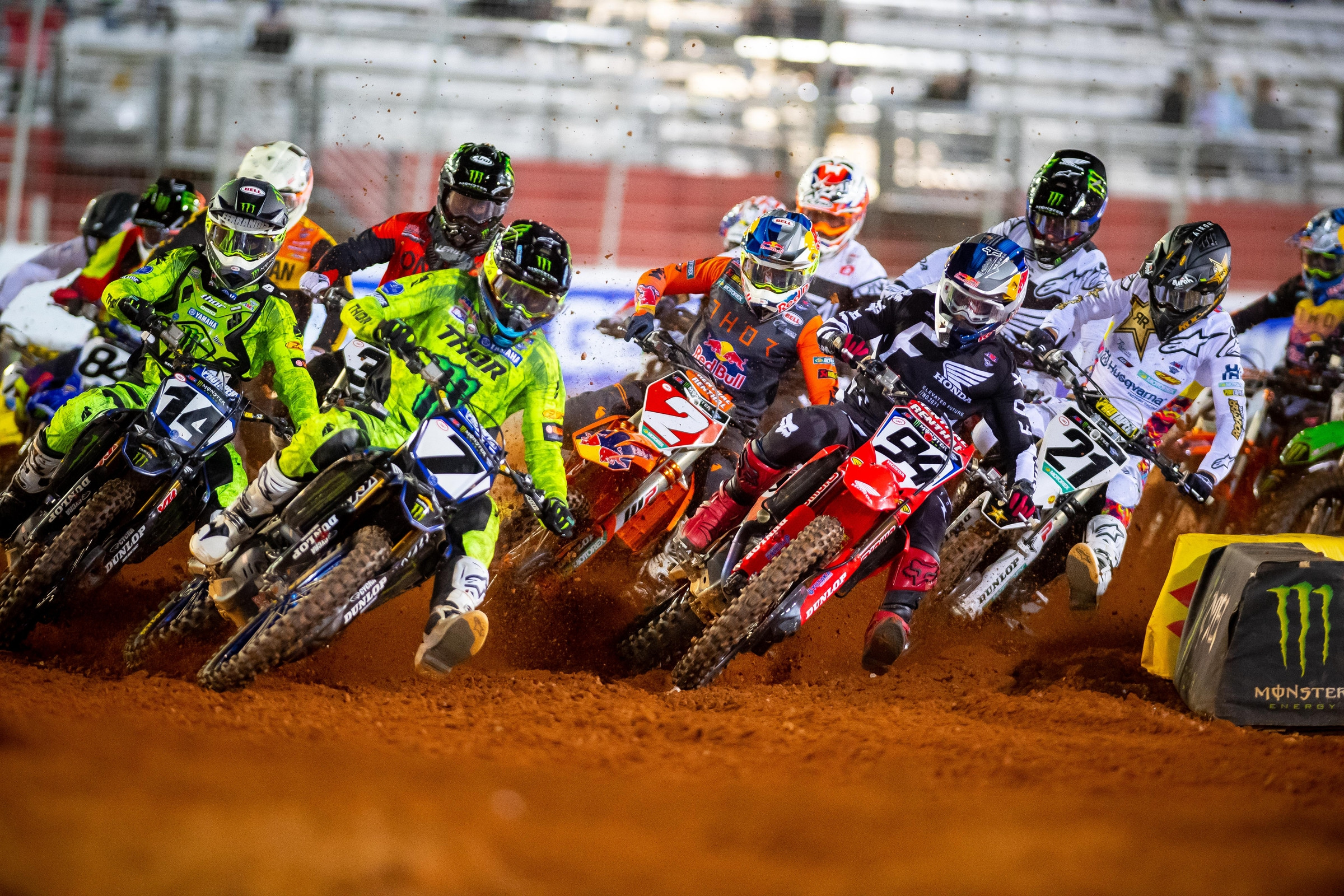 It was championship-defining night, and it fit the definition of what Cooper Webb has come to be. Down and out, the Red Bull KTM man was clinging to points, under fire from two riders while his rival Ken Roczen sped away. Ken was on fire, pulling a gap of 11 seconds, and threatening to change the paradigm for the season. With Roczen working on a second-straight win and Webb merely trying to hold on for a podium, the calculators were already out to determine the points heading into the final two-race tilt in Salt Lake City.

The whoops were the tell on this night. They were huge, and Webb described them as the hardest set of supercross whoops he’d ever hit. But he was handling them with ease, until a late crash put him on the ground. Roczen got up still holding a solid lead, but that changed everything, because he stopped skimming the whoops after that and the jump line wasn’t working. Webb, known for jumping, blitzed to the end, started making up time in chunks, and then Roczen went way wide in a corner to take the lead. With the opening of Roczen’s crash, and his own late-race charge, Webb had defied the normal supercross race strategy, waiting until the final laps of the day to put in his best work and steal a win that was seemingly never in play for him in the first place.

“It [Roczen's crash] changed a lot, it changed the dynamic,” said Webb. “He had a good lead. We were all struggling. They were extremely tough to get through all day. We were all kind of searching for lines and what to do and what not to do. I was making some mistakes early on, really just over riding and trying too hard. I had Eli and AP back there behind me, too, ready to pounce. I saw when he went down I had a shot to win the race. I just really put my head down and started to figure out the whoops. We get there at the end, and it was obviously a late-race charge. It was definitely a tough race. Stoked on it.”

Webb was way off in practice times but he wasn’t as concerned as it looked.

“Today I actually felt pretty good,” he said. “The last couple I had been off the pace quite a bit. Today I just had a few issues getting in clean laps. I had a few issues in the whoops, a few issues in a few other spots. I felt in the heat race when I got to ride behind Jason [Anderson] in the heat race and kind of pick up on some of his lines. For the main I felt like the conditions changed quite a bit. It was more hard pack than the other two, and obviously the whoops were extremely tough breaking down and stuff. You never know. There’s a lot of fast guys and a lot of guys stepping up to the plate, so you never know what’s going to happen.”

“It was weird,” said Roczen. “I hit the whoops pretty good almost every single lap. Once I started swapping sideways like that it’s hard, it started getting bad in that V right there, I had nowhere to go so I went down. It wasn’t a hard crash but the way I landed the handlebars were tweaked so it took a little getting used to. Took the wind out of my sails a little bit. After that I wasn’t skimming the whoops anymore because they were so gnarly. I didn’t want to switch to another side of them and try to skim them because I didn’t know. So I jumped them, obviously it was slow as heck. I tried to regroup. It was a huge bummer, especially after having a 12-second lead. It just wasn’t enough, and that’s costly so late in the season, but in the end I can really only do the best that I can and try hard and that’s what I did. Obviously I wish I could have won. I feel like I could have taken it easy a little bit and maybe just jumped through the whoops for the rest of the main and I would have been fine, but crashes like that happen and it is what it is.”

For most of the race Webb was in a duel with Monster Energy/Star Racing Yamaha’s Aaron Plessinger and Eli Tomac, who were bearing down on him. Plessinger led the race early but Roczen made short work of it, leaping by over the over/under bridge to take the lead. Webb snuck by in a similar spot a few laps later but Plessinger hung tough, and then Monster Energy Kawasaki’s Tomac was a threat as well. After Roczen crashed, though, Webb admitted he smelled “blood in the water” and just dug deep, shedding the pressure from Plessinger and Tomac and making the run for Roczen. Tomac and Plessinger were battling the whole way just behind the leaders, Tomac edged ahead of Plessinger late to get to the podium.

“I made a change before the main and it was better,” said Tomac. “That was frustrating knowing I let something on the table for Tuesday and earlier in the day today. For me it was better riding, it was still third place, but it was better riding. It’s really hard to hit the nail on the head, settings wise, because you have whoops and you have high speed. It keeps it technical, I enjoy having something different.”

Plessinger rode well, well enough to match pace with Webb and Tomac the whole way. Fifth went to TLD/Red Bull GasGas rider Justin Barcia, who was in the group with the leaders but fell down just as Webb was making a pass on Plessinger early in the race. It was a good recovery to take fifth.

“I definitely missed out on the podium, which was a bummer, but all-in-all salvaged what I could,” said Barcia in a team statement. “I just need to keep it on two wheels. I’m really looking forward to the last two rounds in Utah, I really want to get another win before the season’s out.”

Oh what could have been for Jason Anderson. The Rockstar Energy Husqvarna rider has been fast throughout the Atlanta trio and capped it by scoring the fastest lap in qualifying and winning his heat race. Starts have been a problem for Anderson but this time he started in the lead group, but Webb snuck inside of him a few turns into the first lap. Anderson was on the outside for the next corner and got run into by Dylan Ferrandis, taking them both down.

“My day was good all the way up to the main event,” Anderson said in a team statement. “I was P1 in qualifying, won my heat race and in the main event I got a good start but someone got into me on the first lap and I ended up getting shuffled back. All-in-all, it was a positive day and I’m just going to work on it next week.”

Malcolm Stewart was sixth, with huge speed through the whoops. This was his best ride of the Atlanta trio. Ferrandis came back for seventh, then Wilson had his best finish of the season with an eighth.

“My day wasn’t too bad, I ended up with my best finish of the season,” Wilson said in a team statement. “In the main, I didn’t execute the start like I should have but I made a few passes, got into seventh and Ferrandis got me with five laps to go, so I ended up eighth. It’s not a great finish but it was nice to be in the battle. I’m looking forward to Salt Lake and I’m ready to keep improving.”

“It was a very tough track; super high speed and I was losing a lot of time in the whoops,” said Musquin in a team statement. “I had a bad gate pick in the main and I actually had a great jump but the bumps got me. I got into seventh and had a gap there with no one in front of me so I could ride a little bit better but I couldn’t catch up to the guys in front of me unfortunately and then got passed by two guys and got ninth.”

Chase Sexton was tenth. He was fast again but had an off-track excursion through the whoops.

In the 250 class, Nate Thrasher did it again. A first turn crash in his heat race sent him to the LCQ, but he rallied from there to win the main event, just like he did a week ago.

“I think it’s tough but you have one thing going for you and that’s that you get to see the track last,” said Thrasher of the LCQ. “On the first couple of laps you know the track better than anyone else. The problem is the gate pick and the start, you’ve got to execute and the bad gate pick doesn’t help. It ended up being good.”

Justin Cooper further extended his points lead with a steady second, because of more trouble for championship rivals Cameron McAdoo and Hunter Lawrence. The hits keep coming for McAdoo. Already hurting from Tuesday’s mega crash, he compounded it with a huge crash in practice. The goal for the main event was to just stay off the ground, but instead he was involved in about a season’s worth of incidents in one main event.

Cooper holeshot, but McAdoo smacked a tough block at mid pack, bounced back toward the inside and crashed. Chris Blose clipped McAdoo’s bike, went flying and the ground hard. They immediately they red flagged the race due to Blose, who we have initially heard suffered a concussion and an arm or wrist injury.

Yes, McAdoo was involved in a crash, and the race was red flagged, and he headed back to the start again.

Cooper nailed the start again for the restart. On the first lap McAdoo got sideways in the sand, tried to recover and scrubbed the wall jump in front of Lawrence. This left Lawrence with nowhere to go and he hit a tough block and went down. Then Seth Hammaker bobbled in the whoops, collected Jalek Swoll, and McAdoo had nowhere to go and crashed. He collected Pierce Brown. McAdoo got back up and was then taken out by Garrett Marchbanks with a vicious block pass. Somehow after all that McAdoo got back up, kept going, and never stopped digging. On the last lap, while in 13th, he even caught Cedric Soubeyras and made a late charge for 12th but came up a bike length short.

“I’m disappointed,” said McAdoo. “It’s hard not to be. I felt like last week I crashed and that was tough to get through, but today was really hard. I had a big crash in practice. But I believe if you get knocked down nine times I’ll get up ten. Tonight was tough, three big crashes in the main event. I’ll just always fight to the end, we’re not going to feel bad for ourselves. We’ll see you in few weeks in Salt Lake City.”

Lawrence showed great speed throughout the event but his first lap crash set him all the way back. He charged forward to an impressive fourth. Seth Hammaker recovered from his error in the whoops to take third.