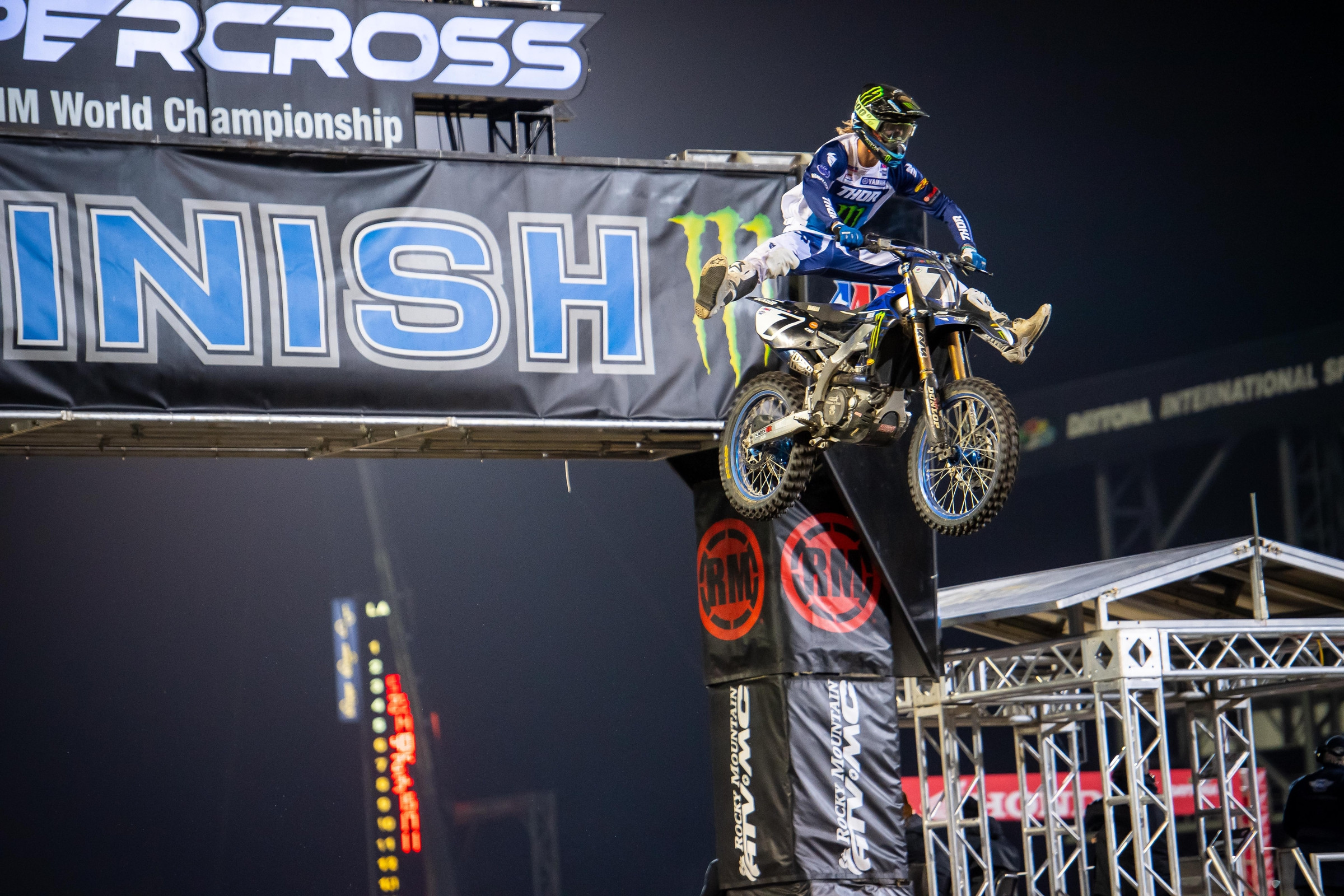 The track will be the real story this weekend, as Atlanta Motor Speedway’s spacious confines allow for more room than a usual stadium supercross, and even more room than Daytona. Why? Well, there’s perfect supercross dirt on site, and lots of it, so Feld Entertainment and Dirt Wurx trucked in 14,000 cubic yards of it, nearly three times the amount of dirt seen at the last race in Arlington, Texas. Plus, without Daytona’s huge high banks, dirt can be brought onto the NASCAR track front stretch to widen the layout. The result? A track nearly a mile long (about 5,000 feet), which compares to about 1,800 feet in a normal supercross layout. It took some special massaging of sections to make sure the riders don’t go too fast in sections, and lap times are expected around the 1:30 range, which is even 20 seconds longer than Daytona. This is a super supercross track. It will be really interesting to watch. -Jason Weigandt

So the track is great, but the weather report is not. At one point Saturday’s forecast showed a 80 percent chance of rain, but that’s tapered down to 70 percent. It was also supposed to rain on Friday, so press day riding was cancelled. Then it didn’t rain! The track is covered and there’s so much room to work with that all the drains on the infield remain open. You’ll notice some grass left on the infield, and that’s where the drains live. Plus, the track is covered. Lots of predictions of mudder here outdoors in Atlanta, but the series will put in its best efforts to keep it dry. – Weigandt

Knowing his dominance of Daytona, another NASCAR speedway infield track should lend itself to defending Monster Energy Supercross Champion Eli Tomac. Possibly. However, this track is just supercross on a larger scale, and doesn’t contain the sand and rough mix that makes Daytona a hybrid motocross/supercross track. Nothing here really indicates this track will favor Tomac, except maybe that long set of sand whoops. If you’re a Tomac fan, it doesn’t really matter though. He might be great at Daytona, but Eli is more than capable of winning on a regular supercross track, too. -Weigandt

If you’re struggling to remember the last time Monster Energy AMA Supercross has had a planned break this long you’re not alone. The series has only had one weekend off for years, making this scheduled two-week pause rather unusual. For guys who were nursing injuries or were simply feeling rundown, it was probably just what they needed. Will we see racers all of a sudden make big strides come Atlanta, or will it be business as usual when supercross resumes on Saturday? ­Aaron Hansel

In terms of the championship, there are really only two guys to keep an eye on right now—Ken Roczen and Cooper Webb. Yes, Eli Tomac is technically still in it and can still win races, but considering he’s facing a 41-point deficit with just five rounds remaining, his chances are slim at best. Webb, however, has been killing it lately—he won all three rounds in Arlington—and leads Roczen by 15 points. Webb’s definitely got the momentum coming into the homestretch, but now we’ve seen a big break. If Roczen comes in rejuvenated and starts clicking off wins, this thing could really tighten up again in a hurry. –Hansel

The 250SX West Region has been fantastic in 2021. We’ve seen four riders win (three of them winning for the first time) in just five races, and there’s been a total of ten different riders on the podium. Ten! The championship situation hasn’t been any less dramatic, either. Justin Cooper, who won the opening round, retook the points lead by winning at Arlington 3, but he’s got little to no breathing room. Cameron McAdoo is just two points back and Hunter Lawrence is six back off of Cooper. With the way the west has been playing out in 2021, it’s anyone’s guess who will possess the red plate following Atlanta 1. –Hansel

Justin Barcia has won the Monster Energy Supercross season opener for three years running. However, the Troy Lee Designs/Red Bull/GasGas Factory Racing rider has also been unable to win a 450SX main in the remaining rounds of each of those seasons, which is something he mentioned he’d like to change earlier this season. Well, he’s got five races left to break one-and-done (for the season) the cycle. Will Barcia finally win multiple 450SX races in a single season for the first time since 2013? –Hansel

It’s been a few races since Aaron Plessinger’s outstanding ride at Daytona in which he held second for most of the race before eventually ending up third, but he’s still done relatively well, going 5-6-9 at the three Arlington races. Of course, those results are trending in the wrong direction if Plessinger wants to get back on the box. Oh and now they are calling for rain in the forecast tomorrow and have officially gone to a revised schedule. If the rain/bad weather does come, Plessinger will be licking his mustache-covered chops come main event time. –Hansel

As the championship visits a new venue, this Saturday’s race will bring back two well-known faces. Veteran riders Ryan Sipes (250SX Class) and Josh Hill (450SX Class) will be competing at the Atlanta tripleheader starting with the 13th round tomorrow. Sipes raced Daytona but got slammed in his heat race by Hardy Munoz. While X-rays were negative, Sipes said, “My hand was getting more sore by the minute, but I did my best and finished the race. Not the result I wanted or train for, but mama didn’t raise no quitter” as he officially recorded 21st. The last time Sipes raced in the 250SX Class before this year he finished eighth at the 2019 Nashville Supercross. Could his experience earn him another top ten this weekend?

As for Hill, the older of the two brothers will be making his season debut aboard a Mountain Motorsports Yamaha YZ450F. He has not raced an AMA event since the 2020 Daytona Supercross as he was racing with the ClubMX Yamaha team until COVID-19 happened and a dislocated hip ended his racing season during the pause in the championship. Hill’s goals for these three rounds? “I just really enjoy it. I’m not going there for any other reason than it is just fun to get on the gate and go test my skills and see if I’ve still got it or if it is time to hang up the boots when it comes to racing,” he told Eric Johnson earlier this week. While Hill might not expect to come in and win the main event, watch for the #84 to flash some talent come the night show. -Mitch Kendra

It’s been a few races since Aaron Plessinger’s outstanding ride at Daytona in which he held second for most of the race before eventually ending up third, but he’s still done relatively well, going 5-6-9 at the three Arlington races. Of course, those results are trending in the wrong direction if Plessinger wants to get back on the box. Oh and now they are calling for rain in the forecast tomorrow and have officially gone to a revised schedule. If the rain/bad weather does come, Plessinger will be licking his mustache-covered chops come main event time. –Hansel

It’s not just Plessinger that hopes to replicate the good vibes of Daytona. His Monster Energy/Star Racing Yamaha teammate Malcolm Stewart put in his third top-five ride of the season at Daytona, and was matching Ken Roczen and Marvin Musquin throughout the race. Yet another teammate, Dylan Ferrandis, has shown great speed throughout the season but hasn’t had the starts to show it. If Ferrandis, Plessinger, and/or Stewart can position themselves near the front at the start of the race, watch for them to bring their A-game. -Kendra