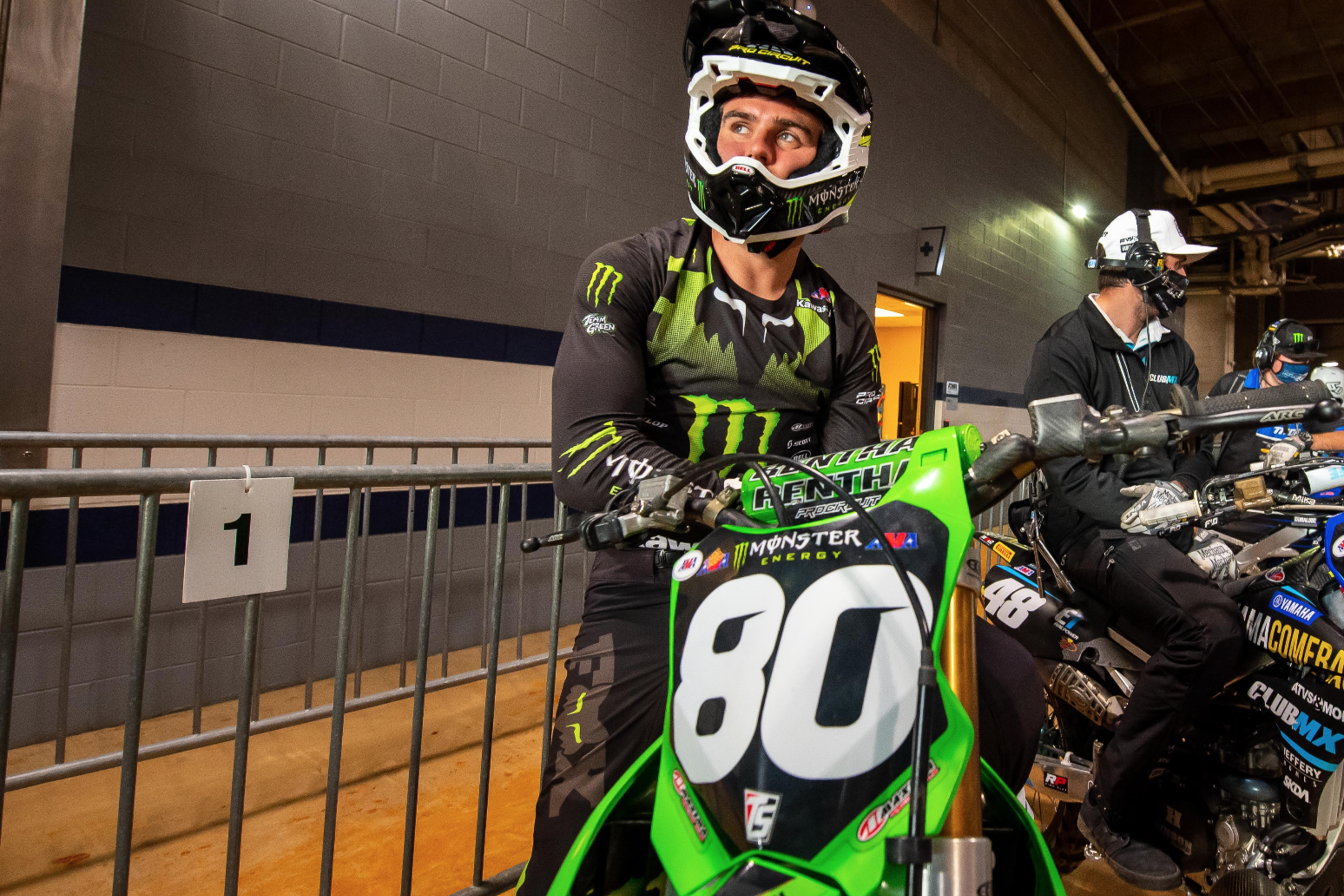 Redux Jordon Smith Out for Remainder of SX

The injury bug has stung Jordon Smith once again. The Monster Energy/Pro Circuit Kawasaki rider suffered a big crash in his heat race at the Arlington 3 Supercross (which you can watch below) where he came down directly on his shoulder on the face of a jump, and Smith said in a video on his Instagram profile that he has suffered a dislocated shoulder.

In the Instagram video, Smith also explained that he will be sidelined for the remainder of supercross. He will avoid having surgery and will instead rehab and prepare for the Lucas Oil AMA Pro Motocross Championship (which starts May 29). Below is his full explanation and video:

“As most of you guys know, it’s been a pretty rough year for me so far. We’ve had a lot of injuries, not very much riding, and a lot of crashes. It just seems like one thing leads to another. And as most of you saw on Saturday in Dallas, I had a pretty big crash in the first heat race there and went down and dislocated my shoulder. So going to be out for a little while with that. Went to the doctor to get an MRI done, I’ve dislocated it once before in 2013, and we just rehabbed it, got it back strong again, and never had any problems other than until now. That’s the plan this time, just to try and rehab it up and start getting ready for outdoors and trying to make a good season out of outdoors. It’s bringing me a little bit of a reset, I’ve been beat up, it’s been pretty tough mentally and physically but luckily I have a great team with the Monster Energy/Pro Circuit Kawasaki team behind me. Mitch has been awesome, everyone there has been really supportive. They know that I got what it takes, it’s just going to take a few things going in the right direction to get everything turned around. Thanks for everyone’s support, we’ll be back soon.”

Since the start of the 2019 Monster Energy AMA Supercross Championship, Smith has only started 12 main events. In 2019, he suffered a wrist injury that derailed his entire racing year, costing him to only compete in four main events of supercross and three rounds of Pro Motocross. Then Smith signed with Monster Energy/Pro Circuit Kawasaki in the off-season prior to the start of 2021 but a torn ACL at the Daytona Supercross ended his year after only four main events. He was kept out of the 2020 Pro Motocross season because of the long recovery process from his knee surgery. Now, Smith’s crash at the Arlington 3 Supercross (the fifth round) means for the third year in a row his season has ended after starting only four main events.

He entered the 2021 campaign with an injury (a torn ligament in his thumb in the off-season) and said in the pre-season press conference that he was lacking seat time leading into the season. While running second in the main event at the opening round of the 250SX West Region, he crashed in the whoops and officially scored 20th on the night after only completing two laps.

Then at the Daytona Supercross he crashed in qualifying and was cut by another rider’s foot peg, which required roughly 20 stitches in his rear end. Come the main event, he managed a 10th-place finish. He said riding since then has been difficult—you can imagine why. So after entering the season with limited time on the bike, the tight racing schedule and crash after crash continued to hinder his body and his results on the track. Then at the Arlington 1 Supercross, when running in third place, he went down seeming easily but ended up taking a rough blow to the chest from the handlebars of his KX250.

He said the crash resulted in a small hematoma on his sternum. Again, the quick turnaround left him racing the second and third Arlington rounds within a week after the crash. Since the seven Salt Lake City races to finish off 2020, we've heard from riders that these weeks with multiple races can either go really well or really bed. For Smith, coming in banged up was not ideal. Now, crashes and injuries will once again keep him sidelined for the final few rounds of this supercross season. Smith will look to return to full health and fight for the first Pro Motocross overall podium finish of his career come the gate drop at the Fox Raceway National 1 on May 29.