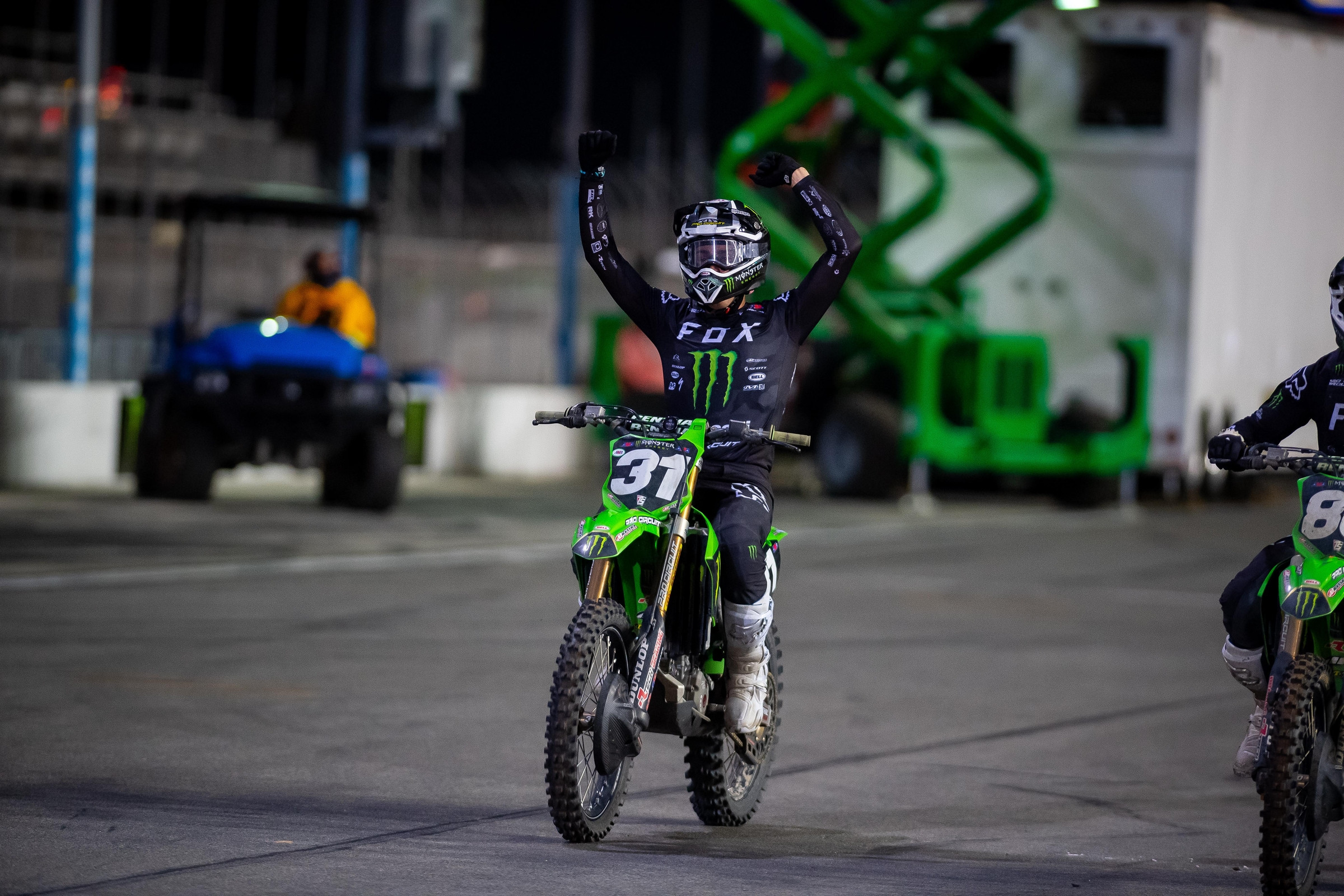 Monster Energy/Pro Circuit Kawasaki Team R&D Manager Zach White’s words spoke volumes. “It was great to get a little down time between races,” said White in the team’s press release in advance of Atlanta’s three-race set. “But we were still very busy making preparations for the outdoor season and keeping the guys sharp to close out the season strong. The new Atlanta venue will be interesting. While we might want to treat it a lot like Daytona because of its speedway location, we’ll have very different dirt to deal with. But I think this type of track could favor us.”

Yes, White, team boss Mitch Payton, and the entire Monster Energy/Pro Circuit Kawasaki program will certainly want their team riders sharp for Saturday afternoon’s first race inside the NASCAR racetrack, foremost amongst the Corona, California-based outfit being Cameron McAdoo. It seems hard to believe that the Pro Circuit empire hasn’t won an AMA 250SX Regional title since Justin Hill got the job done in the West in 2017 and that’s all the reason more why the Atlanta tripleheader is of such importance to the Kawasaki-backed outfit. Two points behind 250SX West Region West title leader Justin Cooper of Monster Energy/Star Racing Yamaha and four points ahead of Honda HRC’s Hunter Lawrence, the title is now basically a toss-up and something Payton, McAdoo, White and company desperately want. How do we know? We tracked down Sioux City, Iowa native Cameron McAdoo and talked about the race for the prize.

The last time you lined up and raced was at AT&T Stadium in Arlington, Texas nearly three weeks ago. For some reason, the three-week break seemed to last an eternity, didn’t it?
Yeah, it felt the same way for us. Especially kind of being in a title fight and wanting to get back to racing. You just kind of want to keep going and keep working towards the goal, so we obviously had some good work to do and got some good stuff done during the break and made some improvements. But it has been a long break. One weekend off is one thing, but then it’s two weekends off and it is like, “Alright, we want to race!” You know once we’re in the season we want to go. We’re racers.

The upside is that you’re in the title fight. Justin Cooper and you are separated by a mere two points and Hunter Lawrence is only a handful of points back from the two of you with only this Atlanta run and Salt Lake City remaining. It’s a bit of a toss-up.
Yeah, it’s exciting. I’m obviously new to it all, but it doesn’t feel super out there. I always questioned how it would feel to be in this position. It doesn’t feel like it comes by surprise or anything for me, so it’s been exciting and we’re enjoying it. I’m taking it race by race. We had one pretty rough race there at Arlington 2 which didn’t do us any good, but other than that I’ve been on the podium every single race and I’ve won all my heat races but one, so it has been the season we have looked for the last few years. It’s finally coming together for me.

Yes, exactly, with the exception of the Arlington 2 race where you were docked three positions after hitting the ground and cutting the course, it has been all podium finishes for you. You’re right there in the title fight.
Yeah, my box score going back to Orlando is 2, 1, 3, 10, and 2. Yeah, the results are pretty good other than that one. Those are the results I’ve posted up and as far as the 10th place finish at Arlington, as they say, you win your championships on your bad nights and unfortunately my bad night was at Arlington. I felt like I salvaged something from the evening when I lost those three points, but it was still a tough pill to swallow, but we didn’t dwell on it and we got over it and it was good to kind of bounce back on that last Saturday race get another second-place finish to prove that I didn’t sit on it and worry about it.

You read my mind. I was just going to say you bounced back quite well from that upheaval you experienced at Arlington 2 to finish runner-up to Justin Cooper by 3.5 seconds.
Yeah, and of course after you win races, second is not our goal and we have to beat that guy because that’s who we are fighting with in the championship. Like I said, we just try to be there each weekend and that’s kind of our plan from here on out. We want to be there every time in these last four races.

Mitch Payton, Zach White and the entire Monster Energy/Pro Circuit Kawasaki team has to be thrilled with your results and overall performance. You’re right there with a shot at the championship and that’s the sort of thing all those guys live for, huh?
Totally. Yeah, Mitch is stoked, and the team vibe is really good. It has always been good for me. I’ve always enjoyed working with these guys. They give me the mutual respect that I give them, and they also make it obvious that we want to win and that’s what our goal is and that’s what we are here to do. We work together really well and obviously it is exciting that we’ve been having some pretty good success this year on our coast. Seth Hammaker and I have had some good races and it’s a lot easier to keep the spirits up high when things are going this way. What I’m thankful for is to be around guys that even when things aren’t going in an upwards direction, they keep me rolling and keep me positive and looking forward to the next race.

I watched the Daytona Supercross race on TV and saw how well you performed on that long and rough infield circuit. What a cool race to win, eh?
Yeah, that was a special moment for me. Obviously, everyone’s first win is really special, but it has been such a long road for me and I kind of took a different route to get to get to that level. The Daytona win was really special. There was lot of work put into it and there were also a crazy amount of ups-and-downs and question marks throughout my whole career, so to win was amazing to me. As it is for anyone and everyone, anyone that gets to this level and wins a race in any of the classes, they’ve had to work crazy-hard and have had really big ups-and-downs along the way. I don’t like to pump my story too much and be like, “Oh, I’ve had all this hardship.” Everyone’s had it. I told my people around me later that the win felt so good. I said to them, “That feeling to win is everything you dream of it being and more.” That was a good one. It was cool and it was fun to be able pull up onto the track and do that burnout and kind of take it. It was a special night for us.

This impending three race run set for Atlanta Motor Speedway certainly seems to have everyone involved in the sport pretty damn fired up and excited to see what just what will play out. What do you think?
Yeah, it looks cool to me! I’ve been seeing some pictures and videos and it looks like it is going to be pretty supercross-oriented with long lanes. It almost reminds me of sort of like Straight Rhythm. It looks pretty cool. It looks like we might have a wet one this Saturday, but who knows? It’s Southeast weather and you never know what you’re going to get there. Whatever it is, we’re going to be prepared for it.

Justin Cooper is an established guy and he’s leading this thing rolling into Atlanta. You’re right there with him. What’s your masterplan for Atlanta Motor Speedway?
I try not to focus on any one racer I race against. He’s not the only guy out there that is good. There are a lot of guys going fast and there are a lot of good guys and everyone is riding good. But yes, obviously Justin is the main guy I’m fighting with for the title and Hunter Lawrence is also in it. My biggest game plan is to just focus on me and executing what I need to do and what I’ve worked on. I can’t worry about those other guys because that will put me backwards. That’s one thing I’ve learned over the multiple years of racing and that is as soon as I start putting a mark on someone else, that’s where I go negative. We’re going to fight hard for it, and I’d imagine that’s their exact game plan too, so I look forward to some good battles and may the best guy win it.