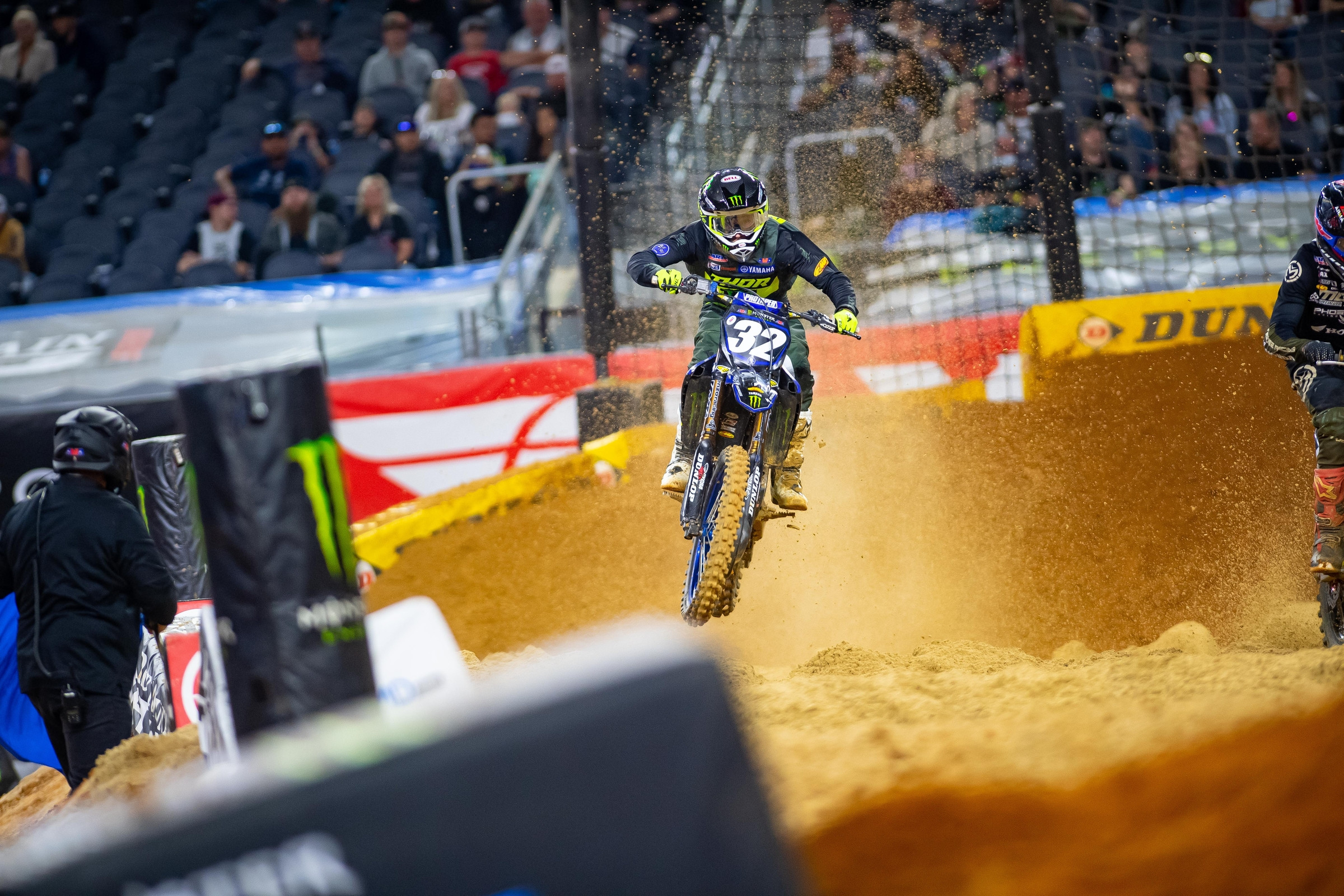 Once Monster Energy/Star Yamaha Racing’s Justin Cooper jetted off with the win at round one of the 250SX West Region, it seemed like his championship to lose, especially with regular contenders like Jeremy Martin and Jordon Smith crashing out of the race. It quickly turned the other way, though, as Cooper, normally a great starter and a podium regular, found himself buried in the pack at the next three races, and going 4-4-5 in the results. Arlington 3 represented a big bounce back, as he holeshot his heat and the main and led every lap. Also, Cooper has topped every single practice session in lap times so far this season—15 sessions in all.

He’s trying not to worry about that and just focus on points. Cooper talked to the media on Saturday night.

Racer X: Justin Cooper, these last three races, in the moment it’s hard to express the frustration, but now you’ve righted the wrong. Take us through the frustrations of the last few races. Were you questioning things? Its’ a little out of character for you to be off the podium.
Justin Cooper: Yeah it was definitely frustrating. You said it right there, I righted the wrongs tonight and it feels good to do that, but I’d be lying if I said I wasn’t frustrated the way the last few races have gone. But that stuff gets thrown at you and you have to take it. It sucks but you have to take what you can out of those nights. It was pretty crazy to have three of those in a row, I felt like I was basically coming from dead last in each one of them. It was good to get some clean air tonight. But back to your question, yes, I was questioning things, but it really came down to that I was doing everything right, and I’ve hot got to stay out of the carnage and sometimes that’s hard to do. There’s also a real fine line between sending it on the first lap and being smart, because those things can happen. It was building up on me and I just needed to get good starts. It’s good to go into the break like this, get back on top. I feel like that’s where we belong and where we work so hard to be.

What was the deal with the starts? You’re traditionally a good starter.
So basically we didn’t get much testing coming into the season. I had three or four days on supercross and we didn’t do many starts—I was concentrating on getting in the riding and the fitness. So we were a little underprepared there, but we got good starts at round one. We made a couple of changes, I was kind of playing around with some things on my starts. It wasn’t working, so we went back to what we know. The starts even in the last race on Tuesday were good, I just got into that incident with Chris Blose, it’s a racing incident and there’s no one to blame there . It’s been tough coming from the back, and really I’ve just gotten sick of it!

Can you talk about your expectations coming into your season? The press was talking about your likelihood of winning and making the podium a lot, and then compare that to where you are now. How do you reconcile that, and how you address that, mentally?
Yeah, I have my own goals coming into the season. It didn’t go to plan, I got hurt about six weeks before the season, so that kind of adjusted my plans a little bit. As I got back on the bike, then I had some hope. I still had some fitness. I wasn’t sure how it was going to go but I felt good. As far as now, you can’t really listen to the media, you have to trust yourself. I had a couple of races go south and I had to maximize the points. You have to move on from those and put them behind you. As far as the media and stuff, it is what it is and it doesn’t bother me. I just want to fulfill my own goals and do the best that I can.

Every practice and qualifying session you’ve been fastest. How cool is that and secondly, when you were off the podium was it maddening to know you had that speed, or is that what actually kept your confidence up?
Yeah I know I have the speed, and the team was actually reminding me, “What does it matter? How many points does it pay to be fastest qualifier?” It’s good for the head and the confidence, but yeah you have to use those practices to find what you’re going to do throughout the night. You have to go over the tape with the team and figure out what’s going to work for the night. I like to practice, it’s good to throw in some heaters and test those batteries out every once in awhile. It’s kinda fun to be on that edge sometimes, but yeah, it was a good day, and whatever happens in practice I’m not following it too much. I know it’s starting to get some talk or whatever but I’m just trying to set myself up to do my best in the races.

Yeah watch out for that undefeated pressure.
[Laughs] Alright!

Justin that first rhythm lane had a big rhythm combination that only a handful of the 250 guys were doing, and you were the only one to do it in the first lap of the main event. Was it a little sketchy to send it off of that first lip knowing 21 riders were right behind you?
No, not really. I got the holeshot in both the heat and the main and I did that line on both first laps. I hit it every lap in practice so I had it down pretty good. I definitely didn’t think of it like that—it was just the normal fast line through there and I had the clear air to do that. That jump was really big, though. I remember hitting in in free practice, and I didn’t really know what to do. I was like “I have to triple out so I guess I’m going to have to quad this.” I came up a little short. I was like “This thing is pretty massive!” The track crew fixed it up a little bit and it seemed to shoot you the right way as the night went on.

I don’t want to say tonight was easy because they’re never easy, but you were out front this time. Can you talk about Daytona? You were basically dead last. Was it just head down and charging? For the position you’re in now in points, that was fairly massive to come through there.
Yeah the last three rounds they’ve all felt like that. Daytona I got hung up on the tough blocks in the first turn. I was like “Is this really happening?” I had put myself in the situation where I had to come all the way through the pack. It was a bummer, I love that track and the [Daytona International] Speedway is awesome. Even in the main coming through the pack my lap times were good. It was obviously good to come back to fourth, but I had Pierce [Brown] and Stilez [Robertson] right in front of me, I basically watched them go across the line. It was frustrating, but I’ve had to maximize points on all these nights, and you definitely learn from it. Glad to put that behind us.

For your question about Daytona, it was a panic in the beginning and then I kind of settled in after about five minutes. I obviously couldn’t take my lines. It’s a little hairy back there with all the guys, they’re searching and they don’t know I’m behind them, and they’re racing for their position. You have to be careful coming through.