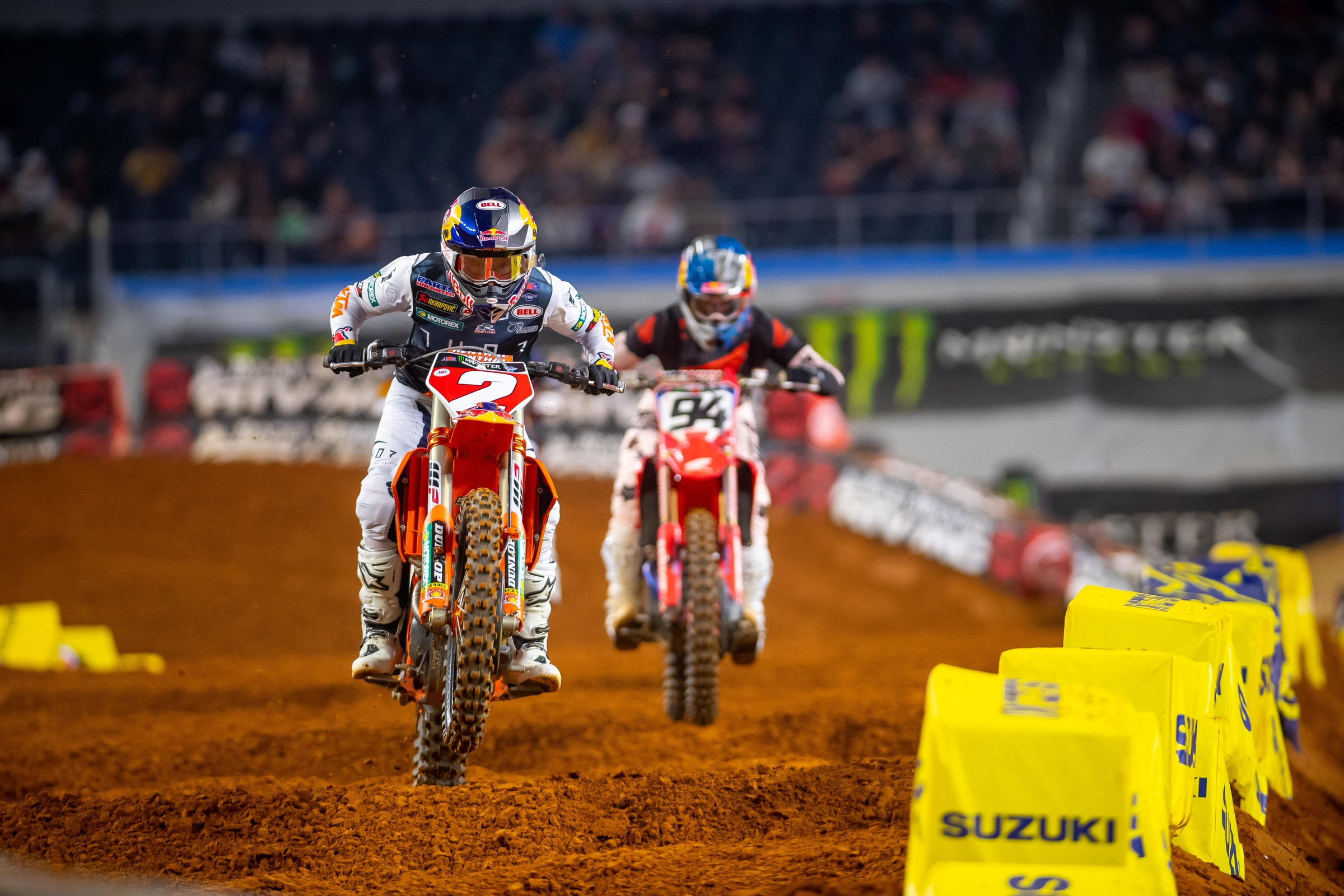 Red Bull KTM’s Cooper Webb won again on Saturday night to sweep all three Monster Energy Supercross rounds in Arlington, Texas, but this third win was anything but normal. His heat race was bad, as Honda HRC teammates Ken Roczen and Chase Sexton caught and passed him, and Sexton even put him on the ground. With the title battle essentially boiling down to just Cooper versus Ken, the heat served as huge momentum for Roczen.

In the main, though, Webb did his thing: he adapted, he figured it out, and he fixed the problems. Then he won. Webb talked about the big night with the media on Monday night.

Cooper, congrats on the sweep at Arlington. At Arlington 2 you had a crash in the whoops in practice, but you said sometimes that can be good, and get you fired up. You are able to respond to adversity. Is that something that you’ve always had or is that something you’ve developed more recently. Did that help you over the weekend?
Cooper Webb: Yeah thank you for that. Like you said it was a great three races, I couldn’t have dreamed for a better scenario. That practice crash was a tough one and sometimes you just have to deal with it the best you can. My buddy Seth Rarick, he always told me it’s good to get a good crash every once in a while and get it out of your system. We joke about that. So it was good to bounce back the way we did.

After the heat race I think a lot of people were wondering how you would rebound for that main event. You clearly didn’t have the pace Ken [Roczen] had there in the heat race. What was that turnaround time like between the heat race and the main event, and what did you do differently? Did you make a bike change? Line choice?
It was a little bit of a combination of everything. We tried a bike change that obviously didn’t work well, but it was just a bad heat, for sure. Ken was riding really well and was all over me and when he got around me, he pulled away. Then I ended up going down and stuff. I just went back and regrouped. It’s easy to let things slip away and let that ruin your whole night, so I was proud of myself for being able to rebound and figure things out. I watched a lot of film and kind of see where I was losing a lot of time. That rhythm section changed throughout the day, so being able to see what changed and what those guys were doing and what was the fastest way through them was good. I was able to adjust. It’s hard to gain pace, for sure, but I was able to do that for the main event which worked out really well.

Coop 15 points up leading into this break. In ’19 you kind of stuck with supercross during the break to get supercross done. Now you have a chance to get another supercross title. Will you do some motocross testing or will you do what you did in ’19, and stick to supercross?
We’re actually going to start some motocross this week, probably just riding but no testing. With the two weekends off we really have three weeks off, so I’m excited to switch it up and get some higher speed riding in. I feel that sometimes helps you when you go back to supercross. We’re going to do that this week, then maybe half and half the following week, then back to supercross on the third week. I feel like throwing in some motocross helps at this point in the season.

You said on the podium that after the heat race, you didn’t like getting put on the ground and that might have motivated you. Can you talk about that incident with Sexton, and then your thoughts before the main?
Yeah, like I said you never want to be in that position, first where you’re getting passed and two… it was a racing, he didn’t mean to do it, but getting taken out always sucks. For me I always try to use it as motivation going into the main event. Getting beat and passed by two guys and getting pulled away from, I was looking for some redemption there. That’s never fun. I just tried to use it to motivate myself to go to the main and do the best I could—try to use it to put that pressure on myself to win. That’s how I was envisioning it, but you never know how racing is, it changes all the time. I used it for motivation, and it worked out really well.

Tell us about your decision to stay on the spring shock instead of the air.
Yeah, I think right now the plan is to stick with the spring shock. At the end of the year, we were really keen on the air shock, it felt good, but we didn’t have much time with it. December is when I got it and we did some testing, but we’re learning every week. I think when I went back to what I ran last year and what I know, it was good. I’m sure we’ll learn more for next year and it will be even better, but for now, for where I’m at and how I’m riding, we’ll stick to the spring and go from there.

Was your first win of the season on the air shock?
Yeah, at Houston we were on the air, and then for the last Indy round we went back to the spring. I think different conditions suit one more than the other. I think there’s a lot of great capability with the air, but we need more time. We only had one month. When you ride the same track every day, you feel like you’re in a good spot, but then we go racing and the tracks are different. The way these races are, racing three days a week without being able to go home and try stuff during the week, I think that was more just that. I think if we had a normal schedule with riding and testing between races, I think we could be ahead of where I am with the spring shock right now, but at what point do you just go with what you know and stick to it? That’s the decision we made.

You and Ken both seem to find each other on the starting line in the main event no matter what. Good rut, bad rut, good gate pick, bad gate pick. Is that a strategy?
Like Ken said, the angle and the rut is what we look at and probably what we all look like. If he wins a heat and I win a heat, we are probably taking the two preferred lines. This weekend I was tenth so there weren’t many good options so I went to the one that had the best rut of the gates that were left. I think getting a clean rut out of the gate is most important. We usually know what position on the gate the starts are coming from, I think we all kind of gravitate to those areas.

We have five rounds to go, if you go back to the beginning of the season would you have expected to be battling with Kenny at the beginning of the season instead of someone else?
I don’t think you ever know! The goal is always to try to be in the championship hunt, and I feel like every year it gets more stacked and you never know. This year has been a good year for me and a good year for Ken and we’ve established ourselves as the two main title guys. It’s just kind of crazy how it all works out. Last year Eli was really dominant at the end and got the championship. I think with our class and how it stacks up you never know what can happen, but at least for now it’s the two of us with a big gap in points over everyone else. So, we’ve both been really fast and really consistent. It’s important to start out strong but over 17 races anything can happen, so like everyone says staying in the hunt around Daytona is really important.

Atlanta is kind of neutral territory, it’s a new venue for supercross. When we think of the usual Atlanta round, red clay inside is okay, but red clay outside, we’ll see about the weather. What are you looking forward to seeing there?
Like you said, it will be different. It’s cool because none of us have an advantage or know what to expect at all. It’s going to be different than our regular stadium supercross and like you said being outside, the weather can be a factor. That Atlanta dirt is usually pretty good and hopefully they can keep it that way all week for us. I’ve always loved going to Atlanta, it’s the closest race to home for me, being from North Carolina, and I always went there as a kid to watch. Going to Atlanta Motorspeedway will be good and to have fans there, I always enjoy that additive of some local fans. We’ll see how it is.

Track is also a different design with different track builders compared to Daytona.  Are you expecting this to be like Daytona, or more like a traditional supercross?
I have no idea to be honest. I’m sure it will be somewhat Daytona style, just based off the floorplan or whatever you want to call it, but the track map looks like they will try to make it more supercrossy. But we’ve seen before where track maps show one thing and then you get there and the track is totally different. We’ll see how it goes, we should have some red clay and a longer lap time. I’m excited to see how it goes.

We’ve seen you do this before. You struggle at one point during the day and then you figure out a way to fix it. Everyone has technology these days that allows them to see what others are doing, but actually changing your riding and doing it is something different. You’ve done that for a long time now. Where does that skill come from? Is that something you feel you’ve always been able to do or is it something you developed more as a pro?
Yeah, I’m not sure where I kind of learned to adapt like that. As a kid, as a fan of the sport, I loved watching videos. I don’t necessarily study film but when I watch something, I guess I’m just able to see it and know how I would do it. I can watch it and see what they’re doing and then I can change and do it the way they do it, or vice versa. The way racing is now with Dart Fish (software that allows clips of multiple riders to be watched on top of each other) and everyone being filmed all the time, you have that easy access, and that makes it hard at times if you want to keep something hidden. But for me, I can watch and learn and apply it and pick up on it. It’s something I guess you could say I’m pretty good at. I don’t know if I learned it as a pro or an amateur, but as a kid I would watch something and then go try it and see if I can do it. Maybe that’s something that propelled me as a pro.