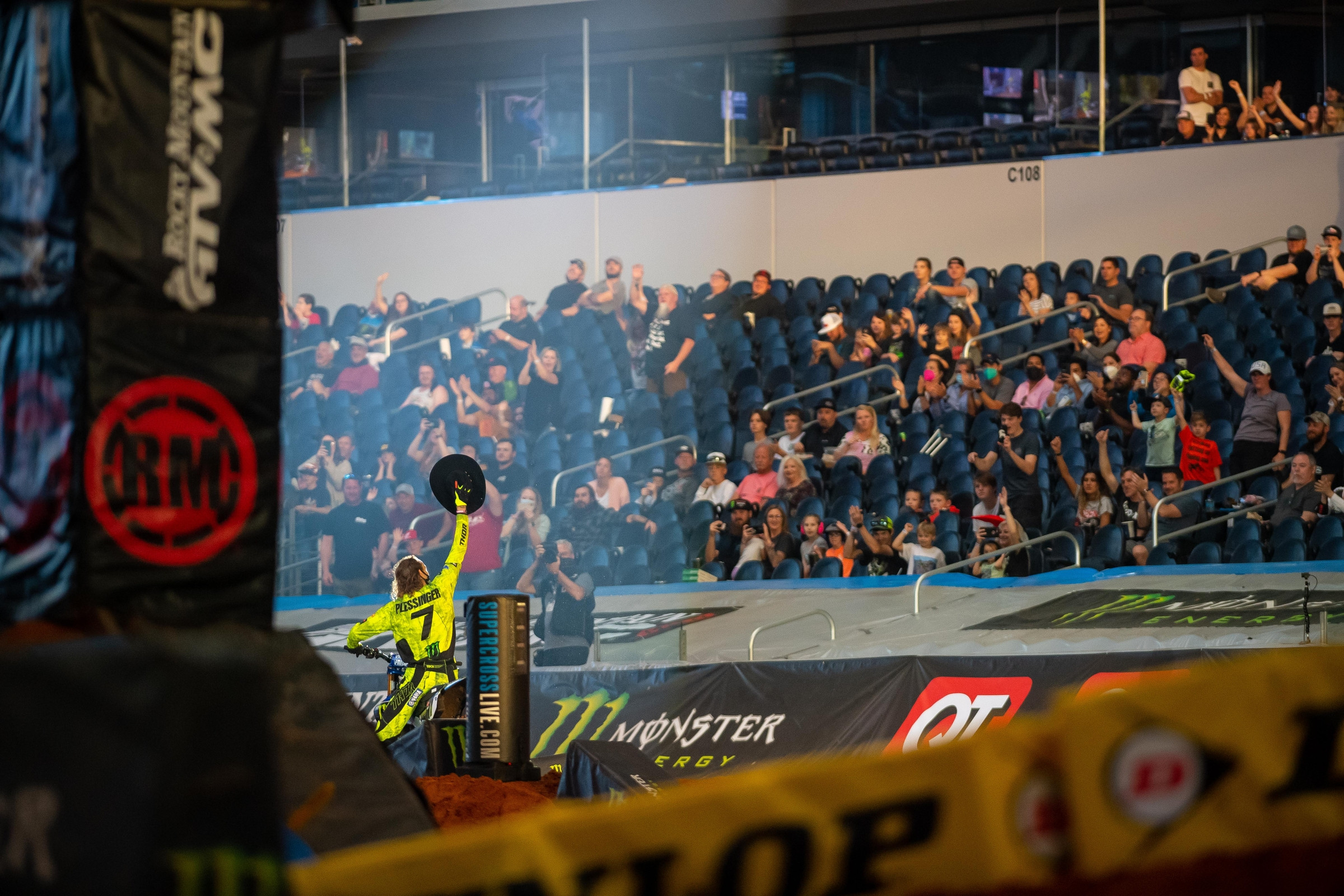 The third and final Arlington round comes to us on Saturday and things are certainly heating up! Cooper Webb has taken this 450 class by storm here in the Lonestar state. He will look to make it a clean sweep tomorrow and put a stranglehold on the points situation. In the 250SX Class, chaos shall reign! We have a three-way dogfight between Hunter Lawrence, Justin Cooper, and Cameron McAdoo that may take us all the way to Salt Lake City.

After what I considered one of the weaker track layouts of the season on Tuesday, we have bounced back with a more traditional layout for round 12. The start is much shorter for tomorrow but still has a nice wide first turn to allow rider movement and safety. The first rhythm section could be made easy if riders can triple out of the first corner and onto a tabletop. If not, I think the line will still be to single the first jump and then double onto the tabletop. Being able to step off of said tabletop and then triple into the corner will be simply too fast to ignore.

The next rhythm section is a bit more creative. There are two basic ways to approach it. Most riders will double out of the corner but that’s where it gets interesting. The fastest way will be to step on, step on, step off and then single into the corner. That will take both finesse and strength as there doesn’t appear to be any lift provided for riders to step off from. If that line isn’t viable, riders will double out of the corner, double to the downside of the first tabletop, and then go for a nice sized quad into the corner. The negative of this line is the height that this quad would provide. Jumping high is a no-no when considering low lap times. Watch for riders to attempt the step-step line first and if that’s not doable, settle for the big launch into the corner.

A 180 right sets riders up for the only whoops section on the track. That bowl berm should allow for riders to crank up the momentum on entry and set up a few passes. For those trying to protect their position, watch for them to carry the corner all the way through the berm, swinging outside to run the far left side of the whoops, setting them up for the inside of the next 90-degree corner. For those trailing, they can counter-act this by squaring the corner and blitzing down the right side of the whoops. When that next 90 left is approached at the end of the whoops, the rider looking to pass has two choices, either cut under the leader and hope to beat them to the next 90, or use the outside berm to slingshot around as the leader fights for traction on the inside line. Pass attempts are best executed when correctly anticipating your rival’s moves. Knowing where the lead rider is going before he does can be the difference in making the move or following for another lap.

The next rhythm section is unique in that I can’t immediately figure out the optimal line. What I can tell you is that I think riders will be doubling here instead of tripling. The options for tripling don’t seem to accomplish much as they lead to higher, taller take-offs, which as mentioned above, are detrimental to carrying momentum. Riders always look to launch from the shortest possible takeoff, promoting forward momentum. Doubling through this section might be the fastest way through, oddly enough.

A 90-degree right sets riders up for the only standard supercross triple and the inside line will reign here. In fact, the inside line will dominate the next several corners. A 180-degree left turn fires into a sand section, which we haven’t seen since Daytona. As the sand leads directly into the finish line, look for a kamikaze run through here for transfer battles.

A steep finish line jump is immediately on the exit of the sand section and leads into a 180 back down the start straight. This 180 is interesting though, as a small double precedes it. If riders jump the double, that will push them to the outside of the corner with the inside line being exposed. I am expecting riders to choose to roll this double, maintaining the inside line instead.

Check out the @YamahaMotorUSA animated track map for Round 1️⃣2️⃣ of @MonsterEnergy Supercross in Arlington! 🏟 #SupercrossLIVE#DropTheGatepic.twitter.com/GoEhTYn2WE

Arlington 2 was an absolutely brutal round for PulpMX Fantasy teams. Several riders disappointed after looking like prime point scorers on Saturday afternoon. Tomorrow night is another chance to make it happen though, so let’s review a few candidates.

In the 250SX Class, Alex Martin was the heartbreak of the night. His last minute decision to skip the race (due to a wrist injury) crucified those teams having him locked in. Sharing that news only minutes after teams were finalized is a move that many won’t forget. Jordon Smith finally paid a points dividend after many, many disappointing races. He still has value, but buyer beware when considering the #80. I also like Carson Mumford and Jarrett Frye to bounce back after rough starts to this 2021 campaign. As riders leave the series with injury, their (Mumford and Frye) odds of improvement increase.

For the premier class, keep it simple. The class is still extremely volatile on the back end as riders like Cade Clason, Brandon Hartranft, Tyler Bowers, Kevin Moranz, Alex Ray, and Scott Champion all have chances at glory. Picking any of these comes with a high level of risk so be prepared for a boom-or-bust result. I will be a bit more risk averse, choosing riders like Broc Tickle, Marvin Musquin, and Chase Sexton. Yes, the rewards can be lower but the likelihood of having your full team in the main event is much, much higher.

After several “creative” lines used by riders at Arlington 2, the AMA makes the whoops and all corners optional. A few riders choose to simply do 21 minutes’ worth of 180’s near the mechanics’ area, causing John Gallagher’s head to explode like a watermelon.

Marvin Musquin bounces back at Arlington 3 and when asked about his crash and subsequent absence for the prior round, gives a 47-minute dissertation on cranial impact.