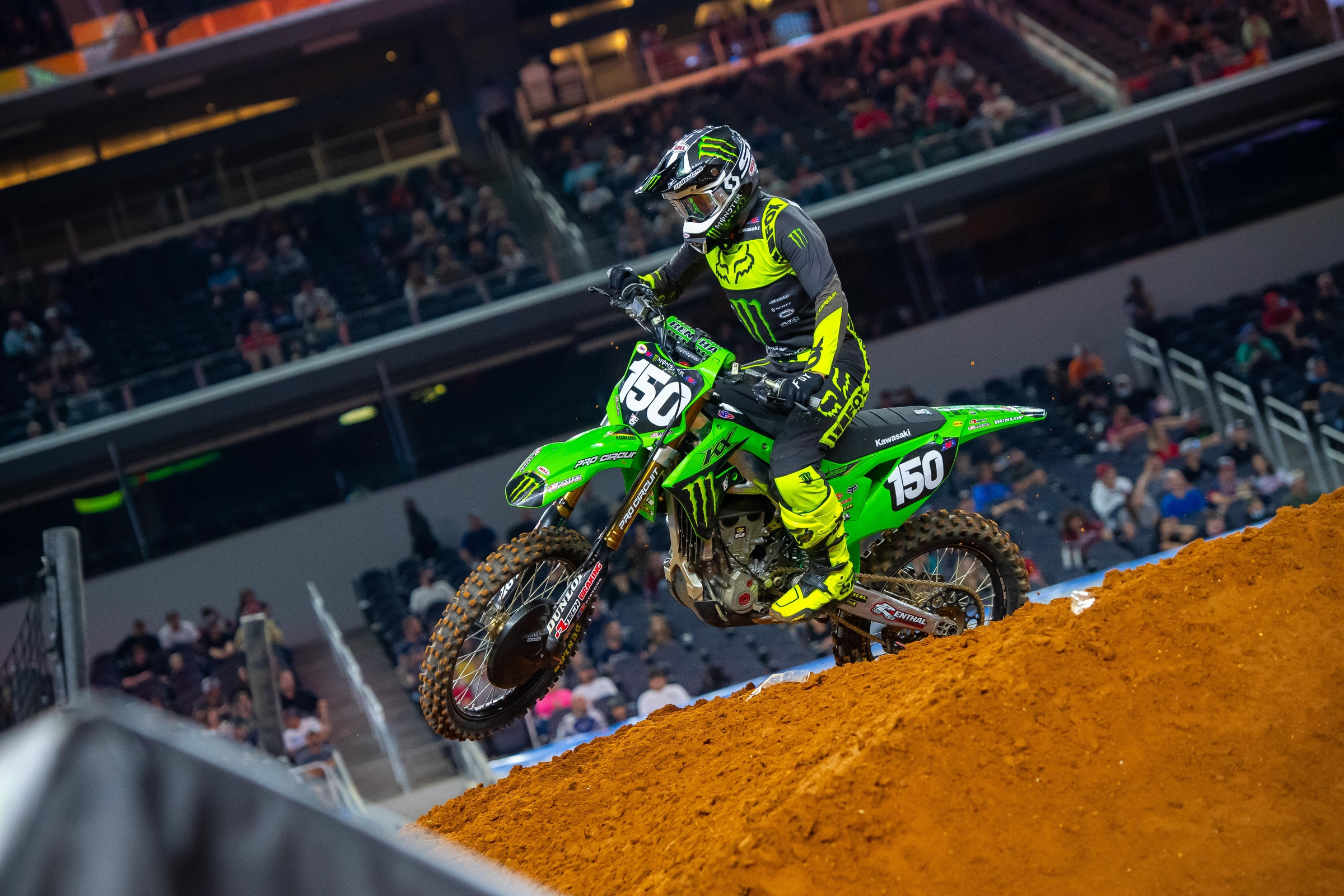 I’m not going to fake it here. Prior to turning on my television and tuning it in to NBC Sports on March 13, 2021 to watch the 250SX West main event from Arlington, Texas, I knew something close to nothing about Seth Hammaker. Twenty-years-old and a new member of the storied Monster Energy Pro Circuit Kawasaki racing outfit, while the native of Bainbridge, Pennsylvania (in Lancaster County, Pennsylvania and population 1,355) raced to the lead inside AT&T Stadium, I quickly scrolled through my phone in an attempt to learn more about him.

Ultimately, and as we all now know, Hammaker won the Arlington 1 main event, and in a way, became something of an overnight supercross sensation. It’s cool when something different and out of the ordinary happens and to witness a young racer roll off the well-worn, beaten path to motocross fame and fortune and win a supercross main just totally summed up what a radically different season the 2021 Monster Energy Supercross Series truly is. And so, with all that, on Friday we sought out and spoke with Seth Hammaker. Laying low and bunning time in the Lone Star State, Seth spoke about the supercross universe and his place in it. Check it out.

Racer X: Seth, it’s Friday over in Arlington. Another day, another race. What have you been doing over there to burn time?
Seth Hammaker: Not too much, honestly. After the race I was pretty beat, so the next day I just kind of took some time to recover. But, yeah, honestly, I haven’t been doing too much. Just waiting for the next one.

Jumping right into it here, I had to catch up to your story to a certain degree. It’s been a while since I’ve talked with a young racer who really didn’t get noticed n a national level until you were much older. You guys didn’t get serious with your youth and amateur racing until much later on, huh?
Correct. Yeah, it wasn’t until I was 15 or 16 years-old. I definitely got going later than most. My dad was into it and I started riding when I was really young, but we never really took it that seriously. It was just kind of weekend stuff.

Just how and why did you guys start to more get serious with it all?
I feel like it was just me. I wanted to just take it to the next level. Once I started knowing what I wanted to do with it, that’s when I started putting the time into it. I was like, “Alright, yeah, this is what I want to do.”

Scanning the Loretta Lynn’s Vault on the Racer X website, you had some strong, top 10 championship results when you raced the 50cc, 65cc and even 85cc classifications. Did people, and even people in the industry, know who you guys were?
Yeah, it was kind of like I didn’t really know what to expect. We didn’t really know a lot of those people because we would only see them once a year at Loretta’s. Loretta’s was the one race we did as an amateur national. We weren’t able to make it to all of them, but we made sure we hit Loretta’s every year because we knew that was the biggest one. Yeah, once we got there, for me it was like, “Man, all these kids, I’ve never raced them. I’ve never seen them besides this one time.” It was kind of a shock to me. But, yeah, we got used to it.

You won the Super Mini (12-15) class in 2016. Was that about the time you guys started looking to get more serious with the sport and even think about trying to become a professional at it?
Yeah, I think that’s when it was. It was like, “Alright, I think I have a good shot at this, and I want to give it everything I have and see where I can end up.”

In 2018 you were runner-up in the Open Pro Sport classification a Loretta Lynn’s. Definitely a result to get noticed from. However, in 2019 you were completely haunted by major shoulder injuries and then in 2020 you were diagnosed with the Epstein-Barr virus. You almost had to sit on the bench for an entire year until you were even healthy enough to race as a professional, right?
Yep. Yeah, it was tough. My last two years of amateur racing were really tough with injuries. It was one after another. It felt like I wasn’t getting anywhere and was kind of watching my group I raced with move into the pro ranks the year prior and stuff like that. Waiting that extra year was tough, but I think it all paid off and worked out.

Heading into the 2021 Monster Energy Supercross Series you truly were a straight-up rookie to supercross. Man, I even read and heard things claiming you were struggling to even get you had wrapped some of the basic fundamentals of that sector of the sport. Any truth to any of that?
Yeah, I didn’t have a whole lot of time on supercross. I jumped into this off-season before my first rookie season and just started learning. It was kind of crazy just to get everything going, and then to go to the supercross races themselves was a whole different thing, you know?

Were you expecting to do so well three races into what was the very beginning of your supercross career?
To be honest, I wasn’t expecting a win. Especially this early. And then to do it in third race was just awesome. I wasn’t really expecting that all season. I was just kind of wanting to improve and stay healthy and make every lap and do every race and just gain that experience, but yeah, I feel like I exceeded a lot of my expectations and now I just want to keep it going. Why not?

To go out and win a supercross, I mean you have to be extraordinarily good and talented on a motocross bike to actually win one of the things. How did you feel going into that first round at AT&T Stadium in Arlington? Were you confident?
Yeah, I felt pretty confident coming in and then everything seemed like I had a good day going. I just felt like I was coming into another race and was going to try and execute the plan of the day. I qualified pretty good. To be honest with you, throughout the whole day I felt better on the track from the first practice the whole way through the main event. Every time I went on the track I got better, which was cool. Overall, I felt really good all day. In the main event I just remember that when I pulled the holeshot one of the first things I thought about was, “Man, this is going to be a long night. This is going to be a really long race, but I know I can go the distance.” I had to be patient and I had some pressure from teammate Jordan Smith at the beginning which made it tough. I was trying not to get passed. I was able to break through and pull a little gap. I started thinking, “Man, I’m really leading this race!” I started thinking about everything and how it had become real. From there I just started clicking off laps and then kept looking at the pylon to see the time and it was clicking down so slow! I felt like I was riding smooth and felt really good out there. Once I got to two minutes left in the race, I said to myself, “Alright, I know I can pull this off. Keep it together and ride smooth.” I got it done.

You rode a flawless race and totally looked like you belonged out front. What did everyone say to you after the race?
Everyone said that too. They were like, “What a good ride. You rode your laps and focused on your lines. You didn’t make any mistakes. You looked like you belonged up there.” That was a good thing to hear. My confidence after the race was really high. It was like, “I know I belong up there in that top three, for sure.”

Dude, it was like you were an overnight sensation. How did that feel?
It felt great. I was getting so many phone calls and text messages. It was awesome. It felt so good, especially after all the injuries I had as an amateur. The win made it all worth it and just put it all into perspective.

You’re new to the Monster Energy Pro Circuit Kawasaki team. Do you feel good and comfortable amongst Mitch and all the guys working on the team?
Yeah, I do. I feel really comfortable. It was good because my practice mechanic as an amateur moved with me when I moved up to Pro Circuit. My mechanic, Jacob Martin, was able to come along with me to be my race mechanic. We know each other really good and it’s cool that way. We have a good relationship. With Mitch and all the guys around the team, I get more comfortable around them with every race. We’re just doing our thing and making it a routine. It works out really good.

So then comes Arlington 2 and you experience a mid-pack start in the main event and hit the dirt along the way to an eleventh-place finish. In a three-day span between two 250SX West main events it was the best of times and the worst of times for you, huh?
Yeah, for sure. At Arlington 2 I didn’t get a great start and ended up going down twice and fought back to eleventh. It wasn’t great, but the main thing was just don’t get too discouraged and learn from it all. It’s my rookie season. I just want to go out there and what we did last Saturday again a week later. I think it’ll be really good this weekend.