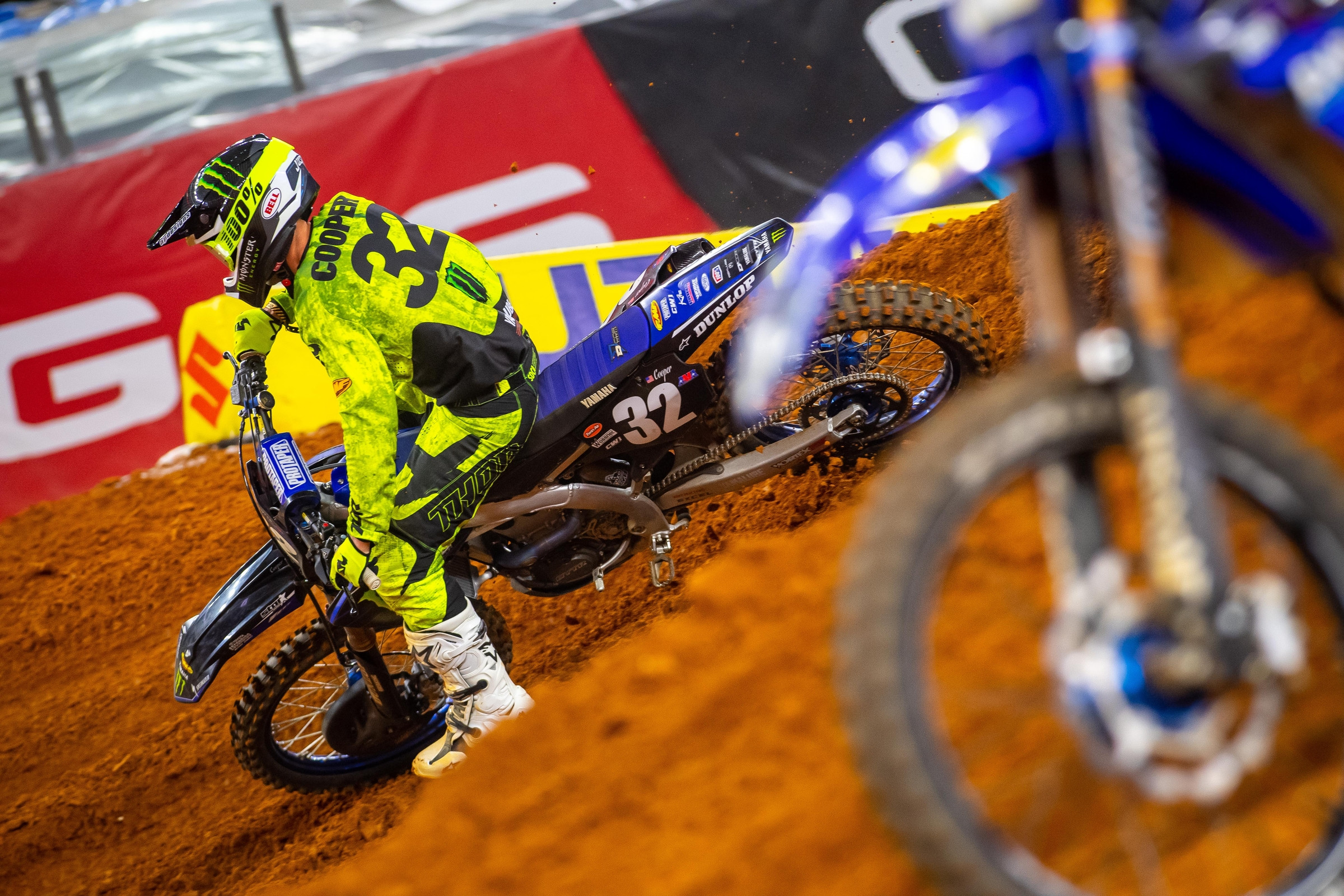 Monster Energy/Star Yamaha Racing rider, Justin Cooper, after suffering a tough opening lap and racing back to fourth place at the finish on Saturday evening inside AT&T Stadium in Arlington, Texas, said, “I had my work cut out for me again. I would have liked to get starts like I did in Orlando, but we’re giving everything we’ve got every time out and that’s all we can do.” Looking to the fourth round of the 250SX West Region on Tuesday night in the Lone Star State, Cooper, who is now six points adrift of Cameron McAdoo in the championship fight, is not only determined to post up victory number two in ’21, but to also take control of a championship with six 250SX west races yet to be run before everything winds down with the East/West Showdown at Rice-Eccles Stadium in Salt Lake City on Saturday, May 1, 2021. Hanging out in and around the Dallas-Fort Worth area and burning time before heading on over to that big football stadium on #1 AT&T Way in beautiful Arlington, Texas, Racer X did a bit of bench racing with the dude straight outta Cold Springs Harbor, New York.

Racer X: Okay Justin, I’m going to take a wild guess and say you’re hanging out in Arlington this week. Having said that, how are you and what are you up to?
Justin Cooper: You’re right, I’m in Arlington. I have some family here in Texas, so we’re just trying to stay busy that way. Yeah, waiting around for the races is pretty hard, though. It’s pretty boring. I’ve been doing some spinning and stuff during the day, but other than that I’m just spending time with some family. We went to the shooting range today, so that was pretty fun.

How’d you do at that?
It was good. I haven’t really shot much so that was cool to go and do. It’s different and it takes you’re mind off of things, so that was good.

You’re three races into the 2021 AMA 250SX West Championship. You won the first main event of the season at Orlando 2 and have placed fourth after two mid-pack starts at Daytona and Arlington 1, respectively. How do you feel about your racing thus far?
I feel awesome on the bike. Everything in that place is just perfect. I feel like I’m not lacking anywhere and I feel like I’m really competitive as far as everything with the bike, but my last two starts in the main events have not been good enough to get to the front. I haven’t really made it easy on myself, so that’s kind of been a bummer. The first round at Orlando went great. I got the holeshot and kind of had an easy race and could ride my own race. These last two races, though, I’ve just been struggling off the gate in the mains. Those aren’t the gate drops you want to struggle with. Bummer there, but we’re working to save as many points as we can in these situations and keep the ball rolling.

Yes, you suffered something of a late start at Daytona and went into the first turn right around 13th place and then experienced a bit of turmoil. Nonetheless, you got immediately going and put the hammer down and started charging up through the pack.
Yeah, that was a bummer there with the start. I went down in the second turn. I caught a Tuff block. I think I was around seventh or eighth right there at that point. I thought it was going to be a good enough start on that track to get back up to the front. My speed was good all day. I eventually got up to fourth and was still hoping to get on the podium and to prove that I had the speed to win there, but then I just obviously couldn’t quite make it back to third. Yeah, you just have to take what gets thrown at you and make the best of it, so that’s what we’re trying to do. I’m trying to be smart at the same time. I definitely want to start turning things around now as far as getting out front in the main events. I want to put myself in a better position to get after the wins.

As you mentioned, you didn’t enjoy the best leap out of the hole at Arlington on Saturday night and came out of the first turn in approximately 10th position You then quickly motored up through the field and looked like you were on your way to a podium finish, but it just wasn’t meant to be, huh?
Yeah, I had to make quite a few passes right there in the first five minutes and once I kind of got clear air while I was in fourth place, I saw Cameron McAdoo up ahead. I just charged to try and close the gap on him and I ended up doing that and even making the pass, but I didn’t make it stick. I tried a couple more times on that last lap and ended up going down. But yeah, it was important to go for that position. I wanted to keep fighting for that podium position and it didn’t quite work out. I want to keep fighting every time and for every position, so that’s been my goal and I’m not going to ever give up and I’m just going to keep fighting.

What was your overall take on the racetrack at Arlington 1?
Yeah, I think the track on Saturday, and you’ve probably heard this from lots of people, was pretty tight and pretty hard to pass on, so I think most of the passes the fans saw on TV on Saturday night were pretty dirty and aggressive because that’s just how it was. That’s what we were dealing with and if you wanted to get to the front, you had to make your way to the front pretty aggressively. Tuesday’s track will be interesting. They left a lot of the infield open and it almost looks like a start straight going right up the middle of the track. I think this next Arlington track will be a little bit more open. There will also be a lot of switchbacks, which might not be good, but overall it looks like it will be pretty good as far as everything else goes.

From the first three races I’ve watched you have looked aggressive, fast and confident. In looking around out on the track, how have you viewed your competition thus far in 2021?
I’m there to win. There’s always competition and there are always a lot of good guys. I feel like I’m better than everyone. Obviously, I haven’t won the last two races, so I have to now really reestablish myself on top and take control of this championship. A title would mean the world to me and that’s the goal this year. Like I said before, we’re going to give it everything we have and never give up. We’ll see where that puts us. I’m just going to keep focusing on what I’ve got to do.

The upcoming races set for Atlanta Motor Speedway look like they have the potential to be very interesting and may also have a very interesting effect on just how these titles play out. How do you feel about going to another Daytona-type supercross circuit?
Yeah, the track looks like it’s going to be even longer than Daytona, which is really cool. I think to have a tripleheader there is going to be pretty gnarly. To have three races on that long, big of a track will probably take some toll on the body. It’s going to be cool. It’s going to be a good place to see who is fit and who is not. I’m looking forward to the three Atlanta races. I’m an outdoor rider and it’s going to be sort of like an outdoor race like Daytona. I was good there and I’m just looking forward to these next races at Atlanta. I’ll finish this out strong at Arlington and then I’ll move over there. All my focus is on this supercross title, so we’re going to do our best to get that done.