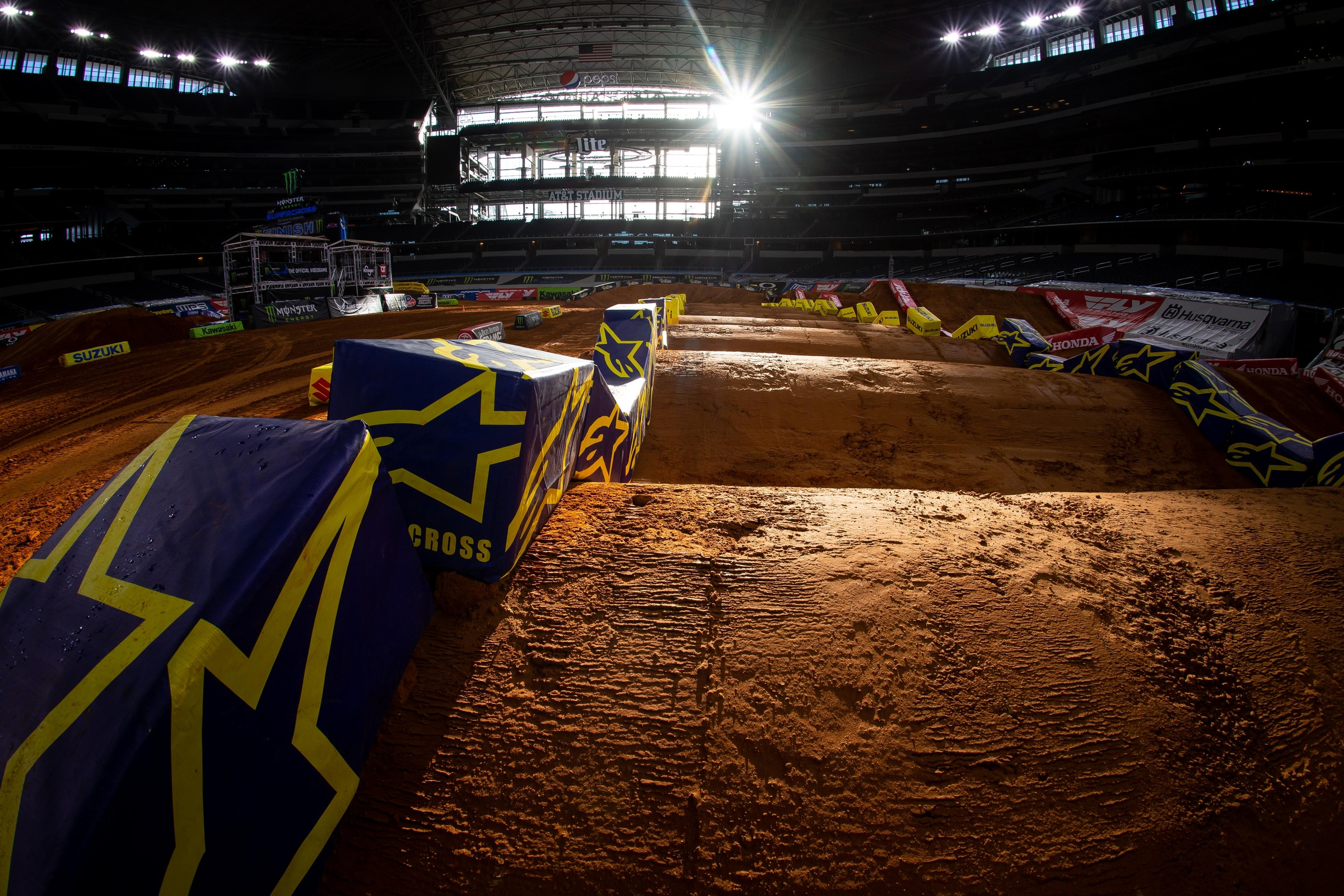 A few seasons back, it was pretty common for Jason Anderson to be bouncing off riders like a pinball. That has tapered off, but Anderson definitely brought some heat on Saturday night, both in speed and aggression. The Rockstar Energy Husqvarna Factory Racing rider got into it with both Dylan Ferrandis and Malcolm Stewart, leaving Ferrandis on the ground. Stewart would later find himself flying through the air and hitting the deck after a failed attempt at retaliation. One good thing about Anderson is that he can dish it but also take it, saying on Instagram, “Can’t wait for some good aggressive racing for rd 2. I’m sure I’ll have some bumps from Mookie and Dylan on Tuesday.” Whether or not you’re a fan of Anderson’s riding, you can’t argue with the results—he was back on the podium for the first time this season. Will he bounce his way forward again on Tuesday? –Aaron Hansel

Well, it finally happened. After several weeks of chasing down Ken Roczen, Cooper Webb took over the points lead at the opening round of Arlington. Based on how well Cooper has been riding lately, it comes as no surprise either. The Red Bull KTM rider has been incredibly strong, and except for a ninth place at the season opener, has only finished off the podium twice, and each of those times he was fourth. Roczen’s been strong too, but now that he’s trailing Webb with the season about to enter the backstretch, he’s got to start winning races again, beginning at Arlington 2. –Hansel

We’re three races into the 250SX west series and we’ve yet to see a repeat winner. Justin Cooper won the opener, Cameron McAdoo won Daytona, and rookie Seth Hammaker won Arlington 1. There are still plenty of riders who are capable of getting it done, too. That goes for the overall podium in general! Including race winners, we’ve seen seven different riders on the box, and the only rider who’s been up there more than once is McAdoo! What kind of combination will we see up front following the conclusion of the 250SX race at Arlington 2? –Hansel

Monster Energy/Pro Circuit/Kawasaki’s Seth Hammaker had quite a night, connecting solidly with a one-two punch combo consisting of a decisive heat race win, followed by a convincing main event beat down in which he led every single lap. If anyone was wondering whether or not Hammaker is the real deal, his performance on Saturday night left no doubt. The only question left is, how on Earth is he going to follow up such an outstanding ride? –Hansel

You’ve got to give credit to Cooper for keeping it clean on Saturday night when trying to displace championship leader McAdoo. Not only would it have been a nice points swing for Cooper had he gotten by McAdoo, but it would have also handed Cooper the final podium position. In other words, it would have been largely understandable had Cooper decided he wanted to rough McAdoo up a bit. Cooper may have pushed the issue on the final lap but ended up sliding out while trying to put a move on McAdoo. As the season progresses you know the urgency will increase. If Cooper finds himself on McAdoo’s tail yet again, will he be just as polite as he was on Saturday? –Hansel

Justin Barcia found himself falling into the same little rut we had seen the previous two seasons after he won the season opener. But unlike the past two seasons, Barcia has found a turning point and had begun to right the ship. “I kind of got away from that at Daytona a little bit because it’s a unique place, but this week I kind of before this got back to a home setting and just fine tuned here and there today and felt good. So, I’m looking forward to the next two here. I think it will be good for me.” Given his strong starting ability, a win could be right around the corner for the Troy Lee Designs/Red Bull/GasGas man. –Kellen Brauer

In the seven main events he’s raced this year, Dean Wilson has been a model of consistency. With three 12th place finishes, two 11ths, one 10th, and now a season-best ninth at Arlington 1, Wilson certainly has found his spot in the 450SX class. But at Arlington 1, he did something we haven’t really seen him do all year—or much in any of the last few years—which was start up front. Unfortunately, the pressure of leading in both his heat and the main led to arm pump, so Dean ended up losing spots. If those same starts are here to stay for the next two rounds in Arlington, Wilson will have some more experience at the sharp end up the pack and could see his results continue to trend upwards. –Brauer

Rebound From the Ground

Malcolm Stewart had his first truly bad race of the season at Arlington 1 after he got into a bit of a grudge match with Jason Anderson that resulted in Stewart slamming the concrete and stadium wall. While he was able to remount and finish up in 14th spot, the result was his worst of the year and only the second time he finished outside of the top 10 all season. Now in a tie for fifth in the standings with his teammate Aaron Plessinger, look for Stewart to be fired up on Tuesday and maybe even land on the podium for the first time in his career. –Brauer

Seth Hammaker’s win was right off the heels of fellow rookie Stilez Robertson leading a large chunk of the Daytona Supercross in just his second race. So, with both riders now putting in that breakout performance you look for out of a rookie each year, which of the rookies will be the next to wow us? Nate Thrasher finished 10th at Arlington 1 as he slowly seems to be figuring out supercross while his teammate Jarrett Frye struggled to a 21st. Ty Masterpool has been a borderline main event guy through three rounds, but there’s still RedBud Masterpool in there somewhere, though maybe not quite yet in supercross. Perhaps one of those three riders finally break through to show their true potential in the coming rounds. –Brauer

Bad weather led to the Orlando double header to hold virtually the same track at each race. The roof over AT&T Stadium means we get an entirely different track today. This round appears to be a lot tighter and more technical which could be very tricky with the blue grooved Texas soil we saw on Saturday night. Does that drastic difference in the racetrack from round to round create a significant swing in either class? Let’s just hope we see at least one pass for the lead in either main event this time around. –Brauer