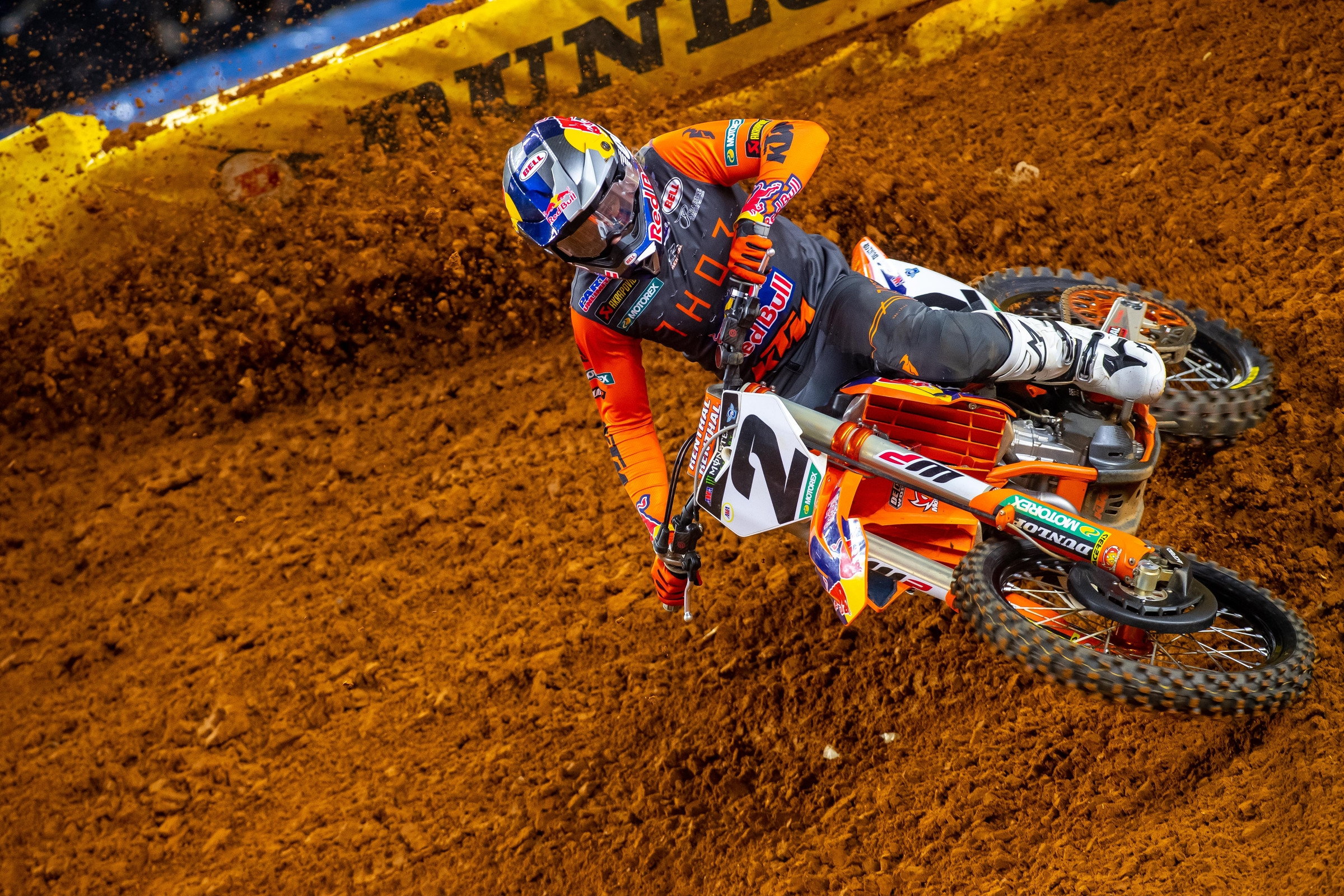 After starting the main event at Arlington 1 in second place behind Dean Wilson, Red Bull KTM’s Cooper Webb was quick to pounce on the Scotsman for the race lead. That quick maneuver allowed Webb to open up an early lead that was never sliced into once Justin Barcia had moved into second place. Webb led all 28 laps for his fourth win of 2021 and his 15th win of his 450SX career to move into the points lead of the championship over Ken Roczen, who could only manage sixth on the night.

Webb spoke with the media via Zoom post-race to discuss his night.

Racer X: That was quite a points swing tonight. Talk about how important it for you was to come in here and kind of lay down the law in the first race and try and change the momentum a little bit of where things have been going.
Cooper Webb: Like you said, it was a huge night. The whole day was really good. Got a great start in the main event and was able to lead every lap. Felt in control. Just hit my marks. It was a great night overall. Like you said, to earn the red plate is sweet. That’s what we work for and that’s the goal. It’s exciting to know that we have two more races here and how well I gelled today. I’m excited to keep it going. As we’re getting closer to the end of this thing, every point is important, but when we can maximize them that’s always a nice advantage, for sure.

You had a horrible crash in Arlington [last year]. Did you ever imagine you’d be where you are today after that very scary crash in Arlington?
Yeah. Like you said, that was last year and it’s never a good memory to have. Even coming back today, you kind of have that in the back of your mind. So, to get redemption from that is awesome and huge. Just for me to be able to kind of block that out and focus on racing today I think for me I gained a lot of confidence. Like you said, it's racing. Stuff happens. You have crashes. You got to kind of forget about it and put it in the past. For me, that was probably the biggest one of my career. When I saw the concrete today, I was almost like, man… I had to walk it out. It’s awesome to be able to fast forward a year later and get complete redemption. It’s a really cool feeling and pretty cool to look back on.

When you saw the dragon’s back in the same spot going the other direction, were you like, “Come on, guys?”
I saw the dragon and still no protection to the side. I’m like, “Here we go.” Like I said, it was good redemption.

This week we saw a lot of hype around last week at Daytona, with the comment from Ken and sort of the hype that social media makes. Does that affect you? Does that affect the mentality? Or do you just feed off of it and use it as motivation?
It gets me going. It was a good week for that. We made the most of it. It is what it is. Obviously in the times with Instagram and everything you’re able to see a bunch. It creates a good story, that’s for sure. I love it. I feed off of it. So, it was cool.

I was wondering what you would say to a young rider that’s just getting into the sport about being where you are now and something to help them focus and keep their eye on the prize?
For me looking back as a kid I just really always tried to have fun and learn as much as I could. I would say for a young rider just try to learn and be the best you can be. Don’t lose sight of having fun. I know that’s easier said than done, but that’s why we do this. I think that always makes you want to learn and do better when you’re enjoying something. So, enjoy it and give it your all.

I was paying attention a lot over the last two days, yesterday’s press riding session, today’s practices—you spent a lot of time in the work area talking to Carlos and the WP Suspension tech. What were you guys looking for in the setup? Was it a lot of small changes? It looked like a click here or there on the shock and the fork. Is it just stuff to fine tune, or was it trying to throw the kitchen sink at everything to figure out a good setup?
We’re in a really good spot right now. I think the last few weekends, besides Daytona, it’s been a click here or there. Really just kind of fine-tuning things. Honestly in the press riding and the practice, we just kind of tried things just to see what it does. So, nothing major. I feel like I’m in a really good spot. More just trial and error to just see depending on track conditions how it’s going to be. I think today it was one of those things where the morning session the track was awesome. A bunch of traction, ruts, really good dirt. As we saw in the main event, it was pretty hard-pack and dry and a lot of chatter. I do things just to kind of prep for later in the day knowing that the track is going to change and stuff like that. But overall, we’re in a really good spot.

If I could ask one more thing about your setup. When you were coming into practice and you’re trying to get that one flying lap, are you setting the bike up for the night show or just to make it comfortable so you can rip one good one and know the bike is going to be predictable?
Mine is pretty much the same. It might be a click here, a click there. I think that’s the goal. As a racer you want to have what we call our base and be in that one or two click window every time you’re on the track. I think that’s when you really have a good setup. I think for me, like I said, as Justin kind of alluded to, the practice lines can change from the race lines sometimes. The momentum that you carry in practice and in the race kind of sets you up to leave the doors open and stuff like that. One lap is a lot different than… What did we do tonight? Twenty seven. So you kind of just want to have a happy medium for all of it.