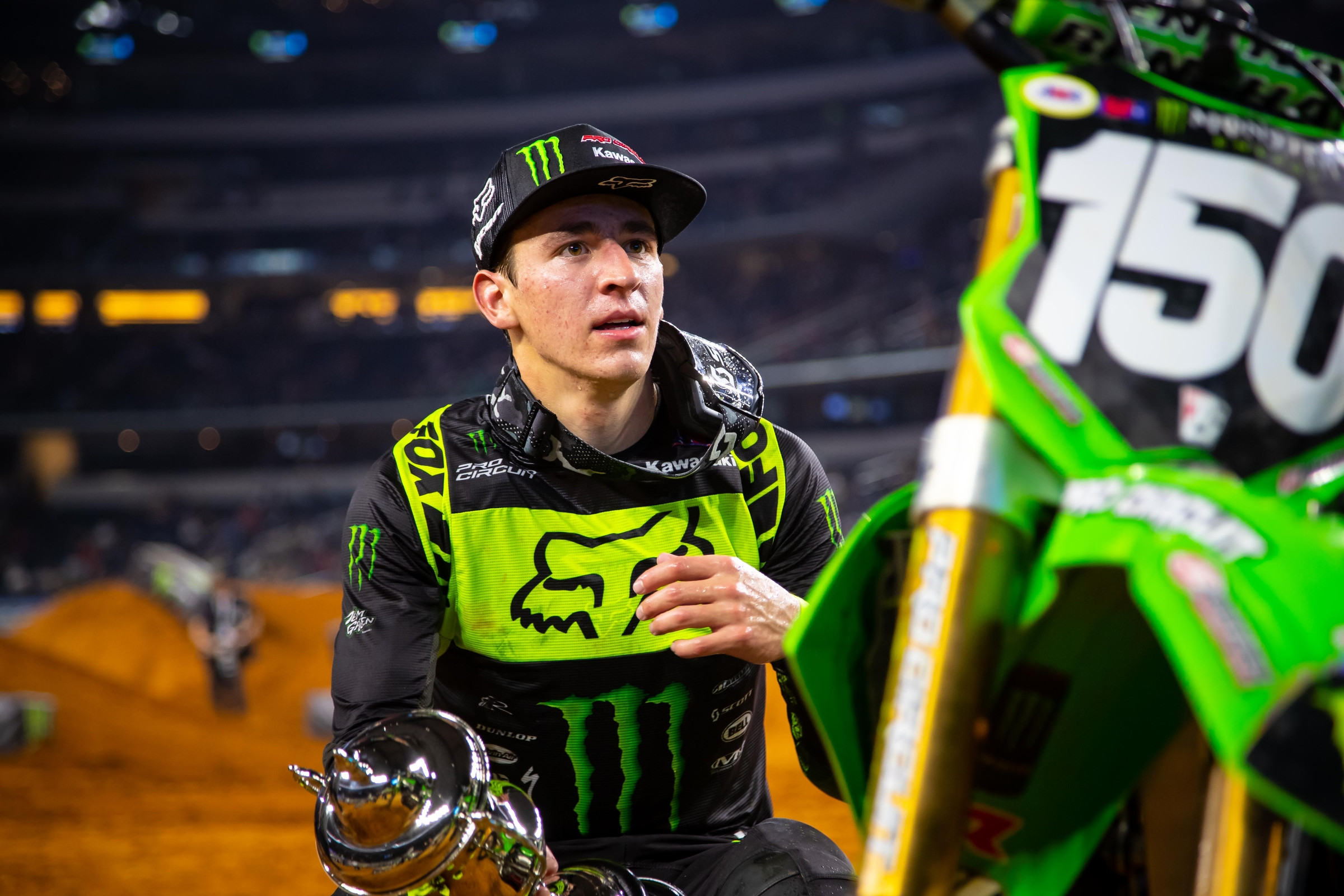 Arlington 1 was a huge night for Monster Energy/Pro Circuit Kawasaki rookie Seth Hammaker. The 20-year-old burst out of the gates to grab the holeshot and put together a masterfully managed race to lead every lap en route to his first career victory. The win comes in just his third professional start after several years of frustrating injuries and ailments during his amateur career that delayed his pro debut. Now he’s a winner and suddenly a whole different talking point just three rounds into the 2021 250SX West campaign.

He spoke with the media after the race via Zoom about his monumental win.

Racer X: This is a big night for you. You’re a rookie. You’re coming into the season. You probably have aspirations of doing well. Did you think honestly that by the third round you would be competing for a win and get one?
Seth Hammaker: No, I definitely didn’t think that by the third round I’d have a main event win. I knew I could eventually get it done, but to be this early is pretty awesome. I’ve learned so much already. Just kind of keep it going. Just stoked to get the first win.

You said on the podium that [the race] was just forever, right? It was super long. At what point in the main event did you realize, “I’m going to do this?” Was there doubt halfway through? What was going through your mind mid-race? When did it kind of lock in in your brain like, “I’m going to get this?”
I would say the first half of the race I was running pretty good. I was hitting my marks. When I got to halfway, I was like, “Man, we’re only halfway?” Kind of feeling it. I was just riding a little tight out there. I feel like probably when my mechanic gave me five laps to go on the pit board I was like, “Alright, I can do this. Hold it together, hit your lines, and just keep riding what’s in front of you.” I would say by then I was like, all right, I can do this.

You and I talked on Friday and I was like, how is this going? Is it more anxious than you thought? Is it harder? You said no, but we also know in this off-season that it wasn’t ideal for you. There were some hard spills that we caught on video at the test tracks. There were some rumors that it wasn’t going that well maybe in December or early January. Did you think a win in your rookie season was possible, or was it just, “Man, I need to get through these seven races, or however many it is, unscathed and then keep building and building?”
Yeah. When I first got on supercross in the off-season it was definitely a little bit hairy. Had some problems in the whoops, just trying to figure out everything with supercross. At that point I wasn’t really thinking about the wins or anything. I was just thinking about let’s go get the experience, stay healthy, make all the rounds. Then I would say probably early January my whoops started clicking a little bit better. I started hitting supercross way better. I feel like end of the season I kind of gained my confidence. I still didn’t really think the wins were in the picture, but I was like, if I can gain experience and learn, I know I can be up there.

Obviously, you had your first pro race and then a weekend off and then Daytona, and now to tonight. You’ve looked really great so far. What is it going to be like for these next two races the next week? I know you talked about getting that experience rather than coming out and looking for race wins right away. Now you’re kind of in that situation. Is it almost better now that you’ve got the win and you can just keep looking to build off that and keep getting that experience back-to-back instead of having test days and overthinking stuff? What is going to be your approach over the next couple days?
Definitely getting this win, knowing what it feels like to run up front, and just trying to keep the momentum rolling into this week. I think it will be actually nice to race again Tuesday and have two days off and then get right back to it. Kind of run off the confidence and know that I can run up with those guys. Looking forward to the next two rounds in Dallas and keep it going.

Where are you with your progression as a tester for the sport of supercross? When the track gets a little bit slick, or you’re navigating through the whoops and the bike’s not doing what you want, when you go back to the truck or talking to your mechanic, are you getting more instruction from them as to where to go with it or are you doing the where you want to go with it?
A little bit of both. I kind of relay the information that I’m feeling to the suspension guys and the team, and then if they see something or if I feel something, they kind of come up with an idea. We’ve been trying stuff in practice. Pretty much once the night show comes around, we have been keeping it the same. As the rookie, testing and knowing what you want your bike to do, it’s kind of tough. I’m learning that. I feel like if you can change something and have it work for the better, it’s definitely a positive thing.

Are you more comfortable with changes on supercross or an outdoor setup?
Probably an outdoor setup, but I’ve been getting better with supercross changes and stuff. With the off-season we’ve been doing a lot of testing. Ivan Tedesco tests for PC, so that’s been really good. He’s my trainer, so I’ve been getting a lot of good feedback from him with the bike. Kind of makes it a little bit easier on us.

Another first win for PC this week. Another win which means all the guys at PC get that pizza on Monday. So, what’s the celebration tonight? What’s it going to be?
I don't know. We’re all just hanging out, having a good time. Just soaking it all in. That’s really what I’m trying to do. First race win, soak it all in. Definitely going to celebrate with the team. It just feels so good. All the hard work they’ve put in and to pay them back like that. Two weeks in a row for Monster Energy PC, so pretty sweet.

Can you talk about your journey to this win tonight? Most times when you hear about shoulder injuries and your other ailments, you don’t associate that with wins. Can you talk a little bit about how difficult this journey has been to get to this podium tonight?
It’s been a long time coming, for sure, even just to get into the pro ranks. I had shoulder injuries, got those fixed, and then stayed another year in amateur. Actually, two more years amateur, pretty much. Got Epstein-Barr. That kind of set me back. It just felt like when everything would start rolling, I would have another setback. It was hard to take that. I just kept pushing and knew that my time would come and was able to start supercross this year. Everything lined up good. It’s been going pretty smooth so far. I’m going to keep working hard. Just making sure I can keep putting in that work and get solid finishes.