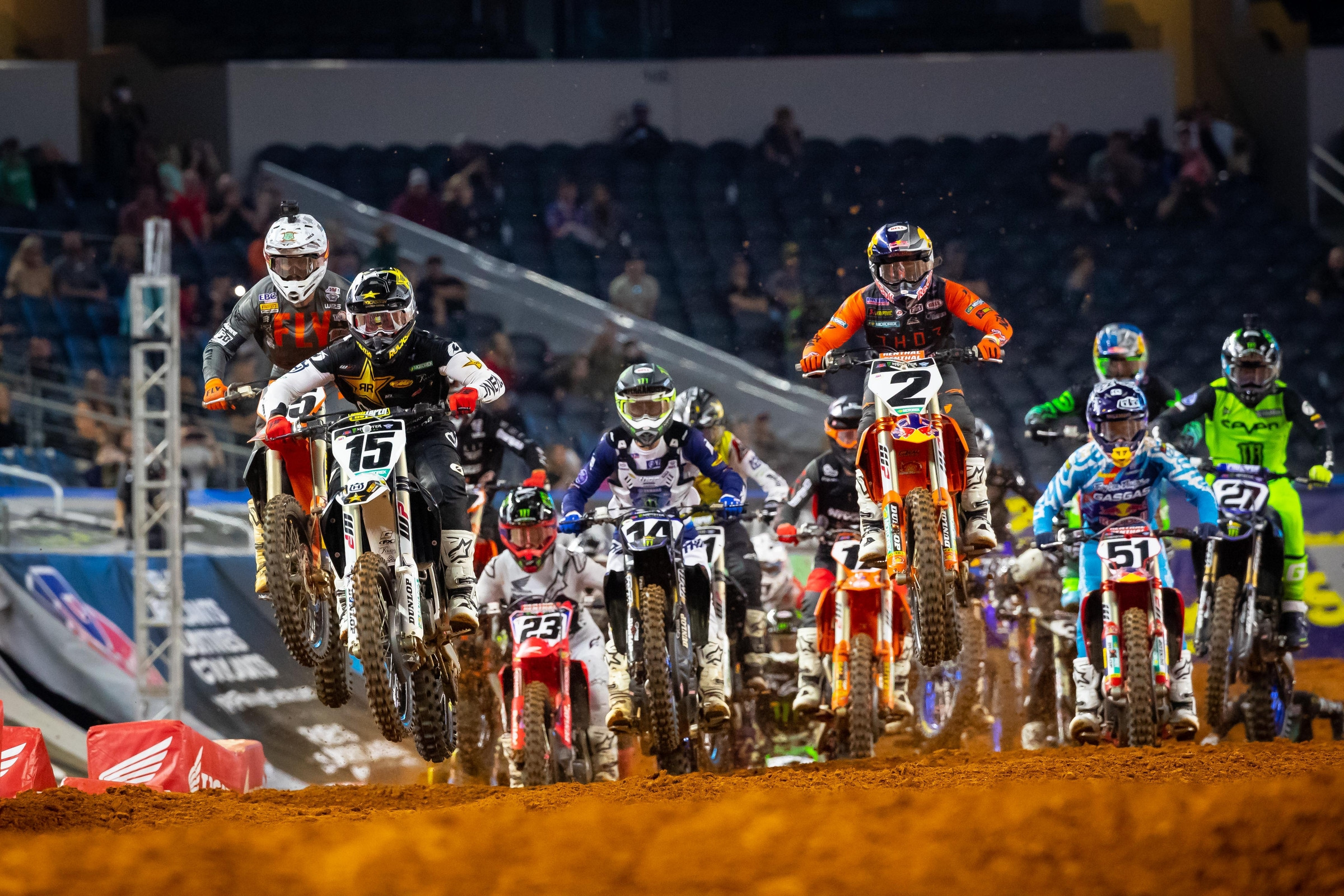 The 10th round of Monster Energy AMA Supercross has come and gone as we officially are into the back half of the 2021 season. Despite wire-to-wire victories in both classes at Arlington 1, we saw a lot of angles to dissect. As such, we fired off questions to long-time pro Jason Thomas to hear his thoughts on a number of topics from the first of three in Arlington.

The split section after the finish line appeared to be pretty equal throughout the entire day. We saw passes from both the inside and the outside. What's your take on how that section (and the track in general really) shaped up?

Split sections are always difficult to build equally. Almost always, one line becomes the preferred route. I think the outside line was the preferred line in this case, too, but it wasn’t overwhelmingly so. That’s the most critical aspect. As long as both lines are usable, I am cool with split lanes. If one line is a distinct advantage, though, you just turn a wide racetrack into an incredibly narrow one as everyone piles into the better choice. Split lanes are tricky and more often than not end up as a bad idea. This time, however, it worked.

Wow, how about that ride from Seth Hammaker!? Did you see this race coming this early from him? What stood out to you tonight about his ride?

I didn’t see that coming! I just talked to him in the hotel lobby, and he is on cloud nine. He rode incredibly well and after fending off Jordon Smith in the early laps, he really had the race to himself. Hammaker didn’t really have any hype coming in. He flew well under the radar and maybe that was for the best. He has arrived now, though. His starts are putting him into great position for success and he just looks to have all of the necessary tools. With Cameron McAdoo and Justin Cooper embroiled in their own duel, Hammaker has a chance to rack up a few podiums here.

Hunter Lawrence finished a quiet second place tonight. Is he starting to shake off the idea that he's an "outdoor specialist" that some may have him as?

He is starting to, yes. I still don’t believe SX comes easy for the young Australian, but it’s nice to see his efforts rewarded. The key for Hunter is to just stack good finishes together. His American experience has been marred by injury and inconsistency thus far, making these podium finishes invaluable. If he can carry this confidence into summer, he will be a serious threat. In my opinion, the most important thing he can do from here on out is to get a few more podiums and stay 100 percent healthy as Pala approaches. SX is the here and now but his aspirations are more suited to the Lucas Oil AMA Pro Motocross Championship.

Justin Cooper has seemed to struggle with starts in the last two races. What's happened to his usually great starts? How do you regain your confidence in yourself on starts when things have gone poorly several races in a row?

The starts are everything right now. Cooper is a rider that has always raced from the front. In the same vein as Mike Alessi, Jeff Emig, and Vince Friese, JC32 is a world-class starter. He feels most comfortable getting out front and managing the race from there. With his poor starts, he is having to fight through traffic. While he is capable, I don’t believe that to be a strong suit for him. He doesn’t have the experience that some other riders might. A rider like Jeremy Martin has been coming from behind his whole career. He would likely feel more at home in that scenario where Cooper is put under more pressure. Priority one for Cooper should be getting back to his starting advantage. Everything else will follow if he gets out front.

Can you explain what happened in Jordon Smith’s crash?

This one is pretty simple. Jordon just rushed a section and lost traction. On the Arlington track, patience was key. Small mistakes had big penalties as traction waned. After Jordon’s big mistake while trying to pass Hammaker, his urgency level was evident. I think he was simply pushing too hard trying to stay ahead of McAdoo. Mistakes beget more mistakes and even though he was on my fantasy team, I could see Jordon’s crash coming. That track didn’t reward risk taking and Jordon’s style is all about risk.

For guys that are rolling (race winners, podium finishers,veterans), the tripleheader formats can be great. But for guys who are struggling and finishing outside of the top ten, is there any way to catch their breath and reset between rounds? The saying goes "If it's not broke don't fix it" but what if you're off with bike setup and can't test to find somethingclose to your ideal setup?

At this point of the season, there shouldn’t be some big settings mystery. There has been plenty of time to sort the bike out. The only real validation I can give is when considering injuries. For Marvin Musquin, this will be a big concern for Tuesday. He will need to pass concussion protocol between now and Tuesday morning if he wants to rejoin the series. The same goes for those with nagging injuries like Jordon Smith. Their recovery period is significantly reduced, and they will have to fight through more pain than they would given a full week’s recovery.

It's still relatively early (seven races to go) but Ken Roczen is a fast starter, Cooper Webb is a finisher, and Eli Tomac might be too far out of this already. Is this the last time we see the points lead change this year?

I think it’s early to be handing out trophies, but I do love what I see from Webb. The mental pendulum has certainly swung towards Webb and he feeds off of that dynamic. Look for him to really up the ante with the mental pressure on Roczen. This is the most critical point of the series thus far. Roczen seems to be on the ropes and Webb will likely go for the knockout punch this week. Can Roczen recover? Tuesday is a HUGE chapter in the book of 2021.

Chase Sexton finished in a quiet fourth tonight. Is this considered a positive from him in terms of not wanting to run before you can walk?

I think it was exactly what he needed. I don’t think he was holding back, per se, but he needed to take a step forward. He put in 20+1 with the elite riders and will be able to build from this finish. His fitness looks ready, his speed is ready, and his confidence surely got a boost. If he gets a holeshot soon, the sky is the limit.

What were your thoughts on the passes by Jason Anderson on Malcolm Stewart and Dylan Ferrandis?

Anderson has been getting aggressive with anyone and everyone in recent weeks. I believe that the tolerance level has been whittled to nothing and moving forward, I think you’ll see retaliation against the #21. I don’t think Anderson really cares, though. He’s going to continue doing what he does. He will have to accept the consequences of that, but he isn’t one to whine. If you want excitement, keep your eyes on this dynamic because I think we are just getting warmed up. There are a few riders looking for a bit of payback.

Was there anyone that excelled for your PulpMX Fantasy team that you would high five right now if you were allowed to?

A few of the highlights were Mitchell Harrison, Joey Savatgy, and Martin Davalos. They all rode well and scored big points. A few riders I would be faking a high five in dismay would be Musquin, Ferrandis, and Jordon Smith. It was a tough night for most fantasy teams as the highest pick trends of the night were poor performers. We will wind it up again on Tuesday and see what shakes out.