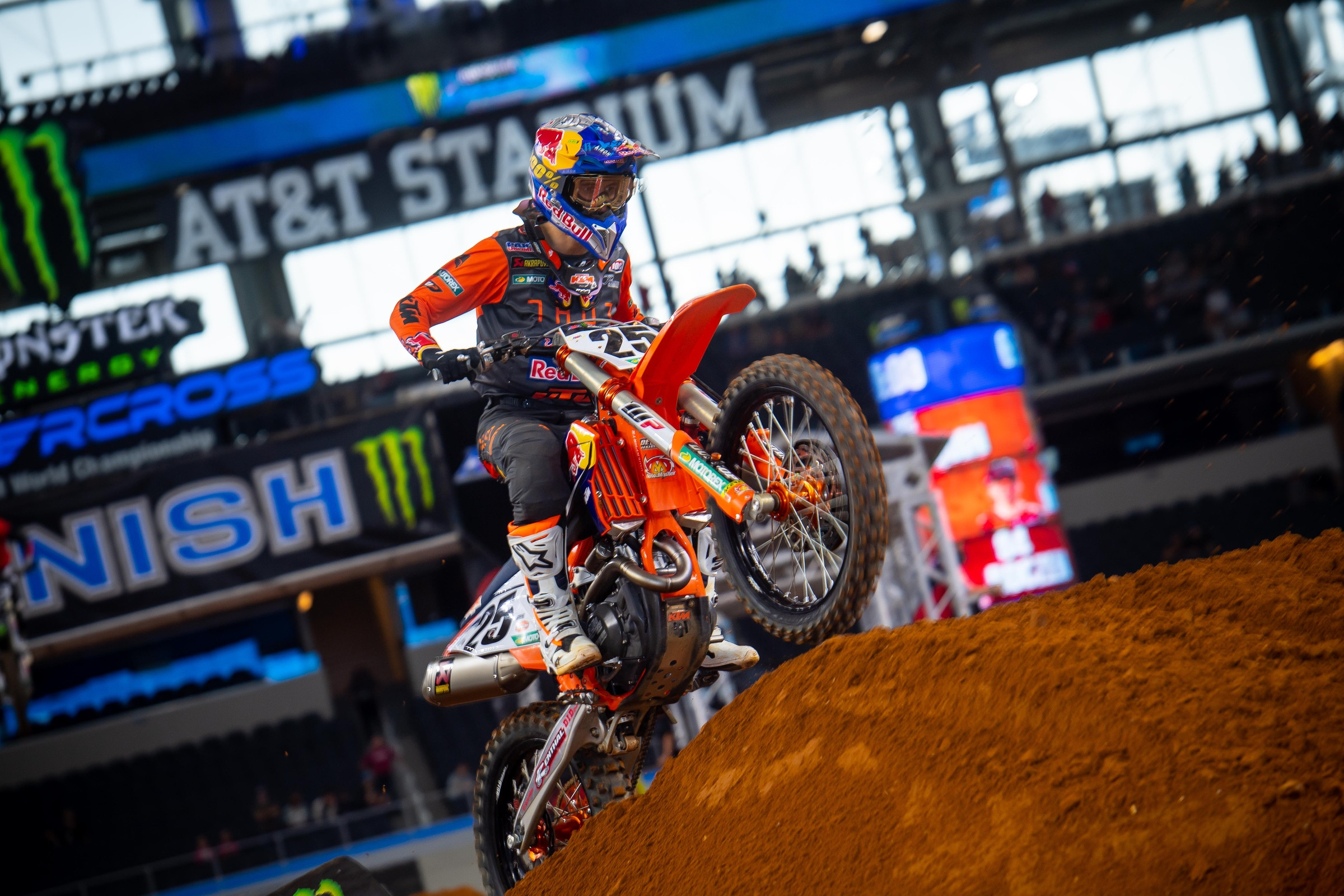 Round 11 of the Monster Energy AMA Supercross Championship (the second of three races in Arlington, Texas) will take on Saturday night. Check out this report for an update on who’s injured.

Comment: Cianciarulo will miss the Arlington races due to a broken collarbone sustained at Orlando 2.

Comment: Ferrandis went down after Jason Anderson ran him high in a right-hander at Arlington 1. He didn’t rejoin the race. The initial statement from the team is that he is “okay and ready to go for Tuesday,” per team manager Jeremy Coker.

Comment: Enticknap is out for the Arlington leg with a broken collarbone suffered at Orlando 2.

Comment: Harlan left Daytona with a small brain bleed, broken left elbow, broken wrist, and rib and lung injuries. As of now there is no date for his return. Harlan told us he’s “not doing too bad,” and is doing physical therapy on his elbow while he waits for his head and wrist to heal.

Comment: Musquin had a scary moment when he hit neutral on an on/off table in his heat at Arlington 1. He crashed hard and sustained a concussion and required some stitches on his arm. He hopes to be back for Arlington 3, although that decision won’t be made until later in the week.

Comment: Politelli hopes to return to action in Atlanta following a concussion and AC separation in his shoulder at Daytona.

Comment: Stephenson is out for the season with a broken wrist, fractured sternum, and two broken ribs suffered during qualifying at Indy 3.

Comment: Brown fell during untimed practice at Arlington 1 and broke his hand. Unsure of the severity of the injury, Brown rode qualifying but later made the decision to sit the night out. At time of posting we didn’t have an official word from the team regarding Brown’s return.

Comment: Cantrell is out for the immediate future after breaking his collarbone in Orlando.

Comment: Castelo is expected to miss the rest of the season after crashing in Daytona.

Comment: Crown crashed hard in Daytona. He was knocked out and will rest up for a few weeks. If he’s recovered in time to be safe for Atlanta, he plans on racing.

Comment: Gardner says there’s a chance he’ll be able to come back for Atlanta. He’s missed the season so far due to a compression fracture in his lower back and an inferior pubic fracture in his pelvis.

Comment: Gonzales is out for the season due to a broken tibia/fibula and talus.

Comment: Lopes is scheduled to return to action for Arlington 2 after dislocating his shoulder and hurting his wrist in Houston.

Comment: Martin dislocated his left shoulder in a big crash at Orlando 2. He’s out for Arlington.

Dilan Schwartz – BANGED UP | out

Comment: Schwartz sustained several minor injuries that kept him out of action for Arlington 1 and will also sideline him for Arlington 2 as well.

Comment: Smith, who sustained a gash in his backside in Daytona, crashed hard at Arlington 1. He looked hurt after taking the handlebar to the chest but after a few laps elapsed was able to rejoin the race. At time of posting we hadn’t received an update on his status.