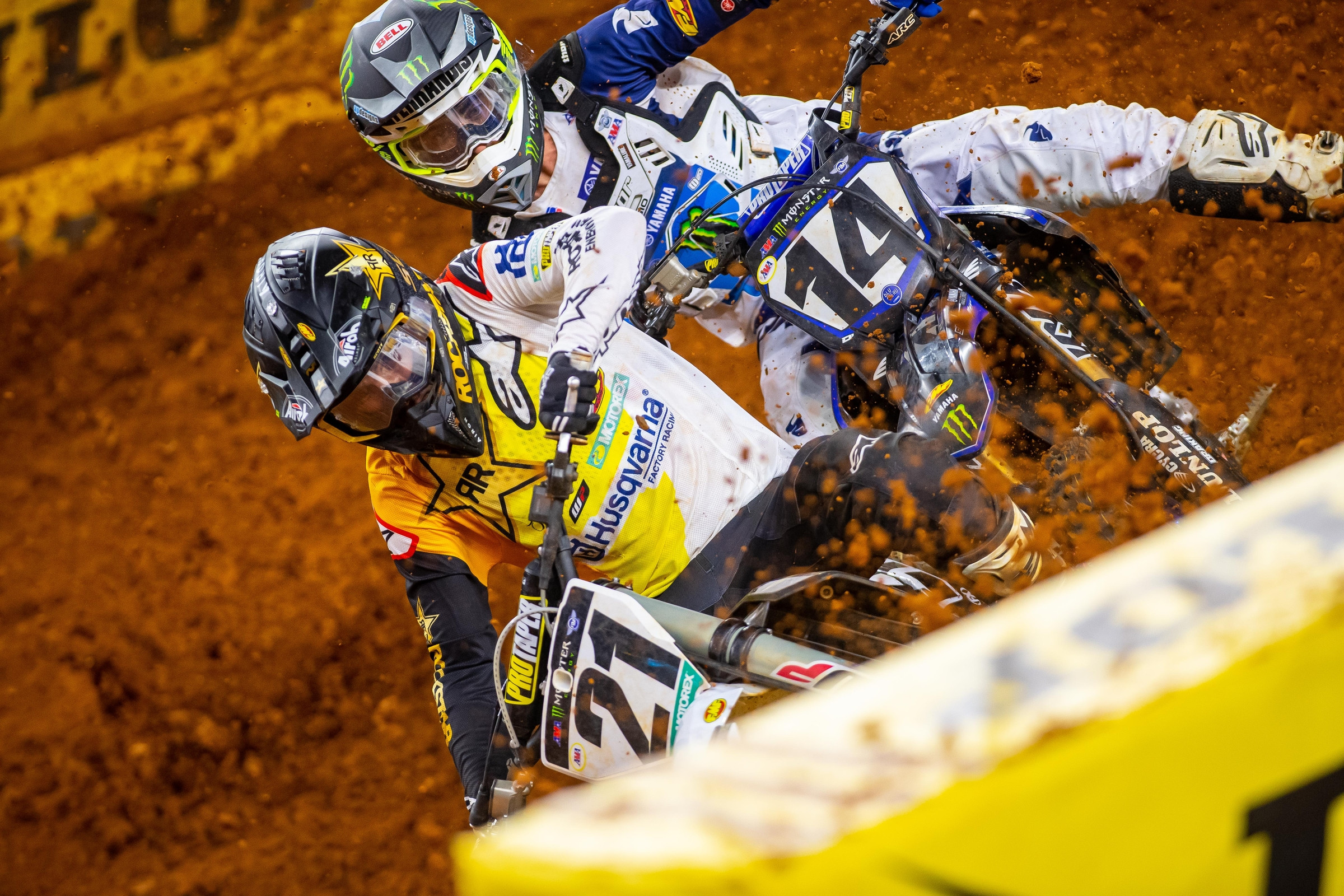 As the second half of the 2021 Monster Energy AMA Supercross Championship kicked off on Saturday night in Arlington, Texas, there was no more wondering as to whether or not there was championship tension between leader Ken Roczen and 2019 champ Cooper Webb. After a first turn incident at the Daytona Supercross between the two created a frustrated Roczen who let his emotions pour out post-race, Webb was none too shy either about letting it be known that he believes he’s firmly inside of Roczen’s head moving forward.

The first of three rounds this week in Arlington almost immediately saw what type of fight we’re in for down the stretch. Roczen went fastest in free practice while Webb just got Roczen for top time in the first qualifying session. Marvin Musquin getting the quickest time in the final session, thus qualifying first, was merely a side note to see what would happen tonight between Webb and Roczen.

In his heat race, Roczen crashed while trying to pass Dean Wilson for second. Webb struggled to a third-place finish in his heat race leaving both riders on the back foot for gate selection in the main event. When the metal hit the dirt, one answered the call – Webb.

Though Dean Wilson officially grabbed the holeshot, Cooper was quick to force Deano wide in the second corner to take the race lead. He never gave it back. After 28 laps, Webb had notched his fourth win of the season, the 15th win of his career, and boasted a seven-point lead in the championship.

“It was a huge night. The whole day was really good. Got a great start in the main event and was able to lead every lap and felt in control and was able to hit my marks,” said Webb. “It’s exciting to know we have two more races here, and how well I felt today, I’m excited to keep it going.”

For Roczen, the 13th gate selection proved costly as he was forced to select a less-than-ideal rut so that he could still have solid inside positioning. The result was a lowly 11th after the first lap while Cooper was already pulling away out front. On a fairly simple and fast racetrack where opportunities to gain time were slim at best, Roczen could only claw his way into 6th, relinquishing the points lead for the first time in eight races.

“Start position was key here tonight and I really messed that up in the heat race," said Roczen. "I went into it with a clean state of mind but obviously didn’t get the start I wanted. On this track in particular, it was really difficult to make passes. So, it really wasn’t the night that I was hoping for.”

Slicing through early for second was Justin Barcia, who at one point was actually catching Webb ahead of him. Barcia’s strong showing was a bit of a flip from Daytona last week where he had started with the lead group but would fade at the mid-point of the race. No fading tonight for the GasGas man as he held strong for the distance and crossed just four seconds behind Webb in second.

“It was a good day,” said Barcia. “I had to be aggressive the first few laps and make some passes, so that’s when I got into second. Me and Coop were pretty similar with lap times the whole race… But I just couldn’t make it happen so second is what we’ll take.”

Third on the night was Jason Anderson, who came together with Malcolm Stewart and then Dylan Ferrandis fairly early on in the main event. Stewart tried to retaliate on the 2018 champ but ultimately took himself down in the process. Given the two instances, the AMA was allegedly investigating both to make sure Anderson was in the clear. In the end, he rode smooth and consistent from a mid-pack start to climb his way into third place for his first podium of the year.

“Ever since the first Orlando I started riding a lot better,” said Anderson. “I had a few little issues with my body at the beginning of the season that got the hang of me… But to be honest, my riding and everything has gotten better since Orlando… Hoping to keep this momentum going and keep getting better.”

Rounding out the top five were two more strong performances out of Chase Sexton and Aaron Plessinger. Plessinger was also able to capture his first career heat race victory as he continues to build on his strong showing from Daytona last week. With his fifth-place finish, it also catapulted him into a tie with his teammate Malcolm Stewart for fifth in the championship. Stewart was able to pick himself up from his contact with Anderson and charge from dead last to finish 14th on the night.

As for defending champion and most-recent race winner Eli Tomac, the momentum gained from his win at Daytona was spoiled immediately by a frustrating eighth place finish in Arlington. The result was his second worst of the season and drops him to 33 points down of Webb in the championship with just seven rounds to go. Though the writing was already on the wall, the nail might have been hammered into the coffin on Tomac’s title chances this year.

In the 250SX West class, Monster Energy/Pro Circuit Kawasaki’s Cameron McAdoo was fresh off his first career win a week ago in Daytona and also held the points lead over Justin Cooper by four markers as well. But the night would be claimed by his teammate under the Kawasaki tent.

Three races into his professional career, Seth Hammaker stamped his name onto the winner’s trophy with his first career supercross win in Arlington. The 20-year-old led every single one of the 21 laps after grabbing the holeshot and masterfully managed pressure from fellow teammate Jordon Smith and a late charge from Honda HRC’s Hunter Lawrence. After a long road through injuries and illnesses to even make it to the professional ranks, Hammaker was rightfully emotional about his victory.

“It’s been a long time coming for sure, even to just get into the pro ranks… Had shoulder injuries and got those fixed so I stayed an extra two years in amateurs because of that. Each time I got things rolling, I’d have another setback,” said Hammaker. “I definitely didn’t think by the third-round I’d have a main event win. I knew I could eventually get it done but to have it already is awesome.”

As for his teammate McAdoo, well he was able to charge forward from a mid-pack start along with championship compatriot Cooper to finish up in third. Though, not without a good fight, as Cooper relentlessly reeled in McAdoo late in the race to close right up on the back of the championship leader. With two turns to go, however, Cooper laid it down trying to slide up the inside for a pass on McAdoo. He would remount fourth, but McAdoo did extend his championship lead now to six points.

“That was a hard fought one,” said McAdoo. “I made a mistake off the start. That was on me, and I was pretty buried. I was happy with part of the way I rode and not so much on others, but Hunter and Seth were riding amazing. Those guys were going fast and same with Justin. It was a dogfight out there and I got to third and just couldn’t make anything happen.”

Sandwiched between was Hunter Lawrence who found himself on a supercross podium for the first time in his career. The Australian had his fair share of injuries as well in the last few years that kept him sidelined for supercross, but the second-place finish on the night was certainly an example of why Honda wanted to pull him from MX2 in the first place to come to the USA.

“It’s pretty cool to prove yourself right and keep believing,” said Lawrence. “You keep telling yourself you can do it, but when you’re not doing it, it mentally kind of pushes you down… We just dug deep and pushed through it and even two months ago, I wasn’t even doing the full supercross track coming off that shoulder injury from the outdoors.”

As mentioned, Cooper settled for fourth in the end as the normally speedy Monster Energy/Star Yamaha Racing machine has not gotten the New York native off to great starts the last two rounds.

“I had my work cut out for me again,” said Cooper. “I would have like to get starts like I did in Orlando, but we’re just giving everything we’ve got every time out and that’s all we can do. I had a pretty big gap to catch up to Cameron and I knew time was running out, so I had to put my head down and really charge and I was able to get up to him… After the quad I tried to dive down to the inside, and it was pretty slick there. I went down pretty quick but was able to get up and get fourth.”

Garrett Marchbanks completed the top five to keep himself in discussion for the championship picture as he has started the year with a third and two fifth place finishes. The points now have McAdoo still holding a close edge over Cooper with Lawrence leapfrogging Marchbanks for third in the standings heading into the fourth round.

That fourth round of the 250SX West and the 11th round of the 450SX class will be right around the corner as we’re back inside AT&T Stadium again this Tuesday for the second of the three straight races here in Arlington. We’ll see you then.