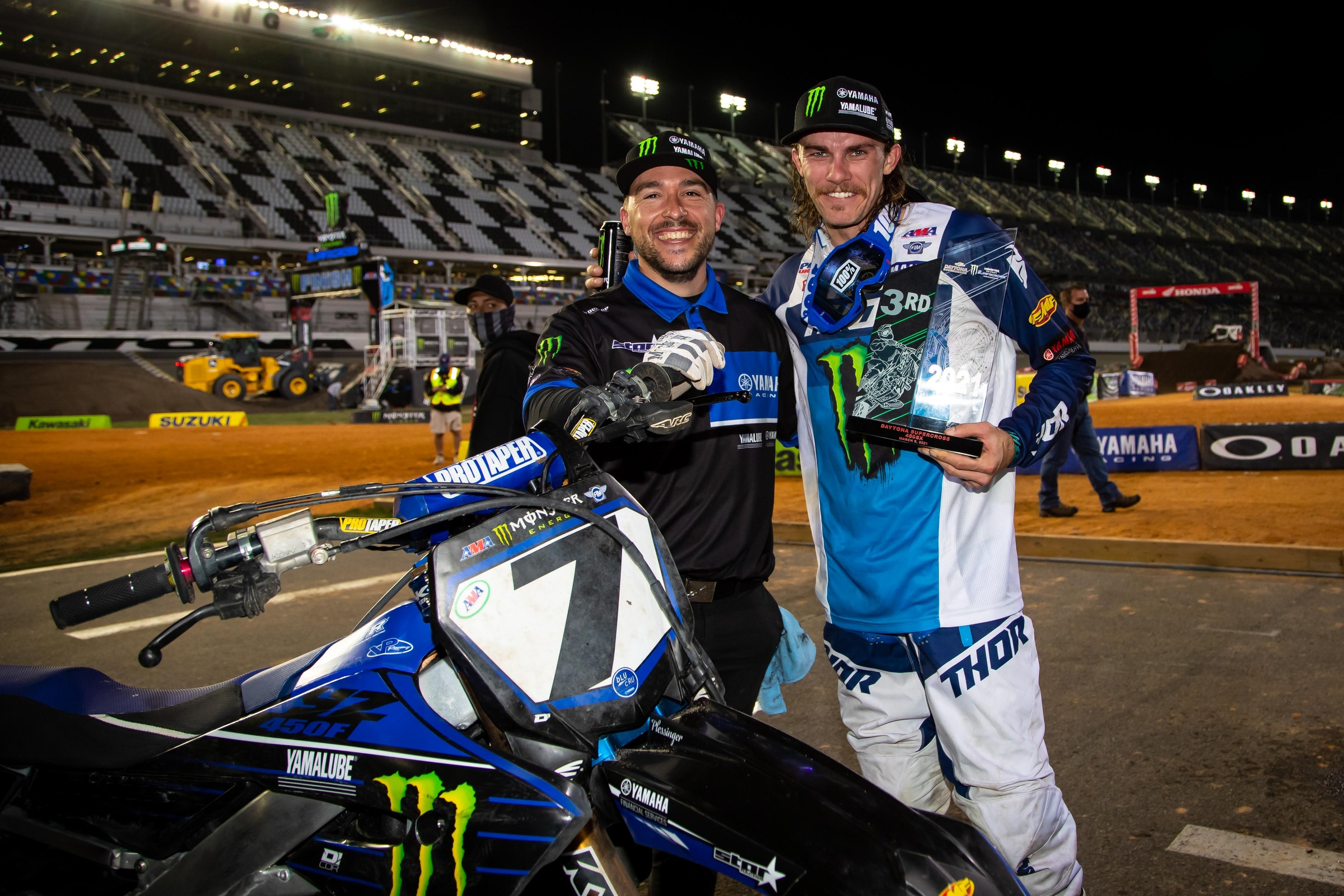 “Me and the team, we’ve been working together hard,” said Monster Energy/Star Racing Yamaha's Aaron Plessinger in his television interview with NBCSN’s Will Christien, fighting back tears of joy and even relief. “The last two years have been tough. To come up here and get on this podium means a lot to me. I can’t thank them enough… It’ll come easier now.” Starting at Angel Stadium on Saturday night, January 5, 2019, Hamilton, Ohio’s Aaron Plessinger has lined up for and raced in a combined total of 42 AMA Pro Racing 450cc supercross main events and 450cc nationals. Daytona marked his first career overall 450cc podium finish. A long time coming for the 2018 Lucas Oil Pro Motocross 250 National Champion and 2018 AMA Supercross 250SX West Champion, the Daytona result was exactly what the Buckeye needed to light a match to his big bike racing career trajectory. In Texas while getting set for Saturday’s Monster Energy Supercross trio inside Arlington’s AT&T Stadium, Aaron took a break to get us up to speed on both Daytona and Dallas. Check it out.

Racer X: Aaron, thanks for taking the time to get us up to speed on all things number seven. So just what’s happening down in the Lone Star State this afternoon?
Aaron Plessinger: Not much, man! Just in the truck and headed back to the campground.

No need to mess around here. Dude, I was watching the Daytona Supercross with my wife last Saturday night on NBC Sports and I must have pointed at the TV four or five times and said to her, “Yep, that’s the real Aaron Plessinger right there! Look at him go!” She doesn’t know much about supercross, but she got the point! It all clicked for you down there!
Dude, it was sick! It was unreal. All day long I felt so good, man. It was everything coming together and teamwork and working so hard… It was just a sweet feeling to get to do that for them knowing how hard they’ve been working. The week leading up to Daytona we did quite a few changes on the bike and after we did those, we didn’t know what was going to happen because they didn’t know if I was going to like it all or not. We just kind of threw some parts on the bike and they said, “If you like it, great.” Luckily, I did and knocked some time off my lap times and put some confidence into me. Yeah, man, I went into Daytona fully confident and fully ready to do business and that’s what I did. It was awesome to be back up there and I’m ready to do it again this weekend.

You’re a two-time AMA Pro Racing champion. You know how to win titles and you know how to win races. Furthermore, your 2021 results have hovered somewhere between sixth and ninth place. You’re in the mix. It seems like something just need to click for you. Thoughts?
Yeah, we just needed some little things to change a little bit. Like, whatever they changed on the bike, it just put that spark into everything. I was fully confident in the bike. It just took that little change and I was back on it and I was confident. This passes that I made on Barcia and Webb, I mean it felt so good; it felt natural. I was letting it come to me and it definitely worked out good.

The Daytona Supercross circuit was much longer, rougher and faster than the tracks you guys have raced on inside the stick and ball stadiums. Did the Daytona circuit lend you a hand last Saturday night?
Yeah, I think it helped me out a little bit. I think whether the track would have been tight or as fast as it was, I think I would have done good there anyways. I don’t know, something was clicking really good. I still feel that feeling, so something was good that day and I think I like that track a lot and it got really rough. It could have been the outdoor feeling, it could have been just the sand itself, who knows? I think the back half of this season is about to really, really good for Star Racing Yamaha.

You guys have been testing and training comprehensively at The Farm down in Florida. Do you feel that place played a role in researching and developing the bike as well as maybe bolstering up your speed and racing fitness?
Yeah, so we went out after Orlando 1 and we just went to work after that. It was good to get down there and get on some southern dirt. That red clay us also really good. They’ve got some sand over there and it is just awesome. Just getting to ride there has been great. I was training there before I went to Salt Lake City last year and to go back kind of felt like home. We put the work in. Whether it be rain or shine, we stepped it all up and we stepped up our program too. I think that you can tell between the three of us - Dylan Ferrandis, Malcolm Stewart and myself – that we’re feeling good on the bike and it’s only a matter of time before we get up to the top step, you know? Working at The Farm, it was great and it was fun.

Yes, it does seem like you, Malcolm, Dylan, the motorcycle and the entire Monster Energy/Star/Yamaha Racing team has been picking it all up and gaining critical mass as an entity. Can you sense or feel that?
Yeah, definitely. I think stuff is starting to lean towards us really well and I like it, man. It’s been a while since it has went this way, but I love it and keep it coming. I miss that attention, you know? I didn’t really notice it, but I’ve done quite a few interviews today and yesterday and I love it. It’s good to be back in the… Well, not the spotlight yet, but the edge of the spotlight, if you would. I missed that and I want to do my absolute best to keep it all going.

You’ll race on more of a traditional stadium motocross track while competing in the three rounds at Arlington. From there it’ll be off to race on more of a Daytona-style natural terrain track at Atlanta Motor Speedway. Do you look forward to racing on both circuits?
Oh yeah, man. I’m definitely excited for Atlanta. I’m excited for this weekend and the next three races here too, but I’m really excited for Atlanta. I can’t wait to get back to that NASCAR feeling of things again. It felt good to work out of the garages of the NASCAR guys at Daytona. It was just a cool race all around. Yeah, I’m exited for Atlanta and I’m excited for all the rest of the rounds. It’s going to be a good back half of the season, I’ll tell you what.

Man alive, starts are important in 2021, aren’t they? The competition is so deep and so fierce in the 450cc classification that the start is of terrific importance now, isn’t it?
Yeah, definitely. The start is year is, shoot, it’s about 75-percent of it. (Laughter). I hate to say that, but if you don’t get a start, you’re most likely not going to come back from the back of the pack. That’s one thing I did good at Daytona. I just kind of got in behind Eli Tomac and he took the route and I came out third and it was really good. Yeah, these starts, with this competition, I mean you’ve got so many champions on the line and it’s crazy, man. They’re all so fast. I mean 10 or 15 of us can actually win these races you know? It’s crazy to think that, but yeah, the competition is really, really stiff and if you don’t get a start, you’re going to be hurting.

Well, sounds like this isn't just a Daytona thing and you can carry whatever you learned about the bike and that confidence into the races starting this weekend. You know you can do it, huh?
Oh yeah. Yeah, now that I know I can do it, I think it’s going to come a little bit easier. Not easy by any means, but easier than it has been. The confidence  for sure, is right there where I need it to be and I’m excited. I’m all set to go here at Arlington.