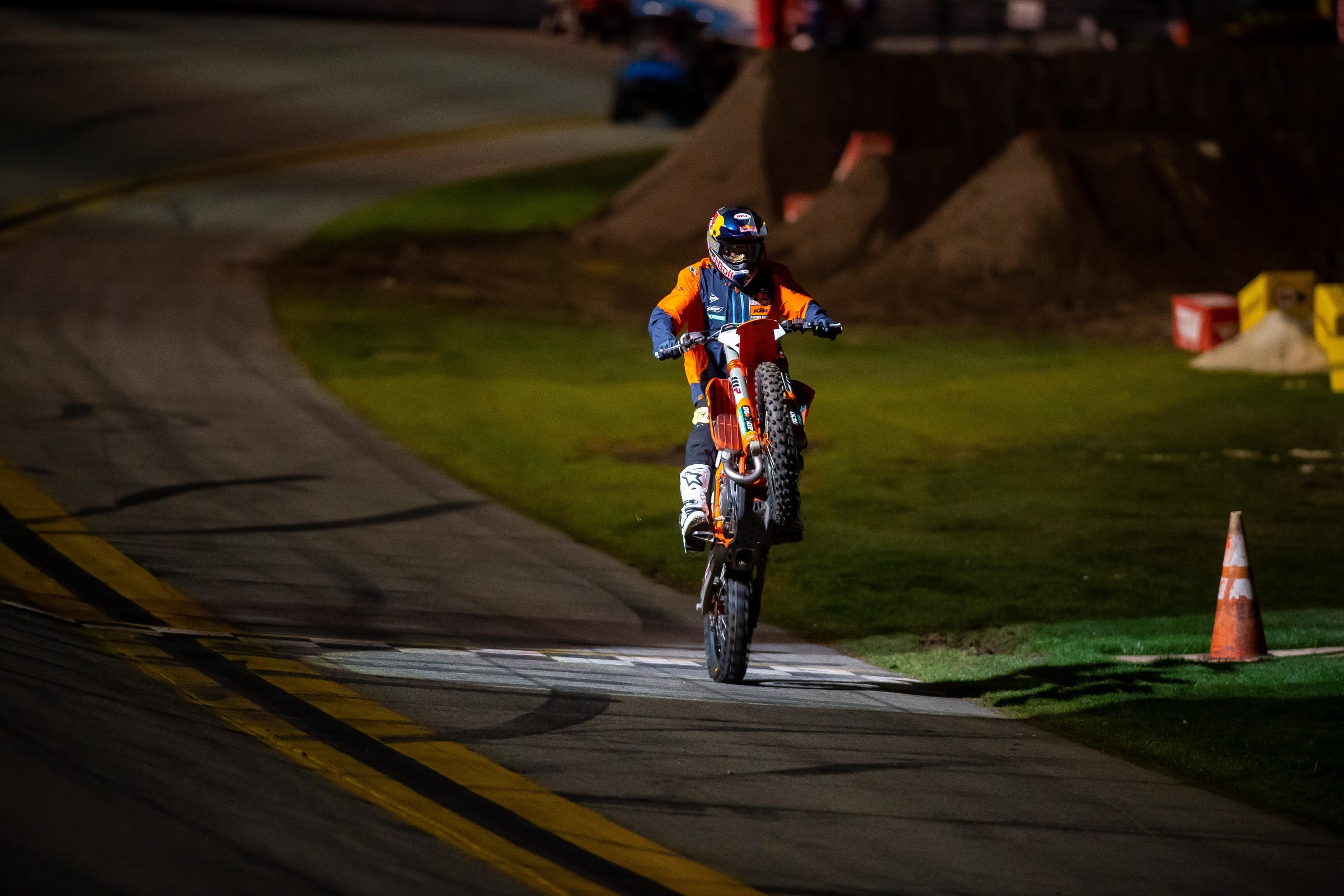 There probably couldn’t have been a better venue for Cameron McAdoo to get his first win and take over the points lead. Not only is Daytona International Speedway legendary, which adds to the glamour of a first win, but it’s where McAdoo’s career as a racer was jumpstarted back in 2016 at the Ricky Carmichael Daytona Amateur Supercross. Now, five years later, McAdoo punched his ticket to the winner’s circle at the very same place. Of course, one is never enough, and you can expect McAdoo to be on the hunt for more, starting in Arlington. –Aaron Hansel

McAdoo wasn’t the only 250SX rider celebrating firsts last week. Both Stilez Robertson and Pierce Brown checked boxes of their own by going two and three, respectively, to land on the podium for the first time. Stilez, who was competing in just his second professional supercross race, even led laps! Brown’s third place was impressive too. It was just his first race back since injuring his knee last summer, and even had to hold off a charging Justin Cooper at the end to secure the final podium position. Can these two up-and-comers keep it going in Arlington? –Hansel

Not Out of the Blue

We probably should have seen something like this coming from Aaron Plessinger. Perhaps not something quite as spectacular as his ride in Daytona, but something like a breakout performance from the Monster Energy/Star Yamaha Racing rider. After all, he’s been noticeably better this season, and he and his teammates talked about more breakthroughs in bike setup after spending a few weeks testing in Florida. Plessinger’s breakthrough finally came in Daytona when he passed Cooper Webb and ran second for most of the race. Yes, he did make a mistake at the end that allowed Webb to get back by, but his first career 450 podium is big. With the kind of confidence, will Plessinger get back on the box in Arlington? –Hansel

The Champ is Here

At least in Daytona, he was! Eli Tomac hasn’t been his usual, dominant self in 2021, that’s no secret, but you’d never know it by the way he rode in Daytona. The Monster Energy Kawasaki rider was fantastic, leading every single lap and taking the win unchallenged. It was his second win of the season, and his fifth at Daytona, which tied him with Ricky Carmichael on the all-time Daytona win list. Does Tomac simply own Daytona, or will we see a new Tomac from here on out? –Hansel

Crowded at the Top

Everyone saw Cooper Webb push Ken Roczen to the top of turn two at Daytona, which pushed Roczen back a few spots early. Roczen was none too happy about this and said he will put extra focus into everything he does to be that much better on the weekends. He wants to beat Cooper badly! The question is, will Roczen use the Jerry Seinfeld strategy of, “The best revenge is living well” and just try to win races and the title, or will he go after Webb with an aggressive move on the racetrack? That’s what everyone will be wondering, and watching for, over the next few races. –Jason Weigandt

Justin Cooper put a nice early hold on 250SX West by winning the Orlando opener, despite just getting back on the bike after a foot injury. He figured to be even better with time to prep for Daytona, but an early crash set him way back in the main event. Cooper salvaged fourth but lost the points lead. Can he put himself back atop the podium in Texas before McAdoo gets too much momentum? –Weigandt

Phoenix Racing Honda’s Kyle Peters won every single round of Kicker AMA Arenacross this year, with an astounding 20-0 record. The veteran also raced the Orlando opener for 250SX West and came from way back to seventh. Peters has told us the goal is to podium, and he’s working harder than ever to get that result. After skipping Daytona to wrap up his AX title, Peters is back in Arlington for supercross. Can he grab a podium? –Weigandt

Plessinger, as mentioned, was great in Daytona. Don’t sleep on his teammates Malcolm Stewart and Dylan Ferrandis. Both looked better at Daytona than they had at most races this year, with Mookie inching closer to race-winner-level pace (he hung tough with the likes of Roczen for most of Daytona). Mookie has been rock-solid consistent this year, and one of these nights could be the podium night. Ferrandis already has a podium this season but even he is still surprised with that round two performance. Ferrandis says they have the bike in a much better place now and there are no excuses, it’s time to get results. Will the Yamahas push further forward in Texas? –Weigandt

Back in the day, races in this area (the old stadium in Irving or the new one in Arlington) were known for rock-hard, slippery dirt. Traction levels have improved greatly the last few years here, and now riders get some grip. However, you still have a track that doesn’t completely break down in the whoops. Sometimes. In fact, the Arlington race has presented some of the gnarliest whoop sections in recent supercross history. The soil breakdown will be a key issue to watch not only on Saturday, but as the Arlington trio of races rolls on. –Weigandt

After missing the first few races with injury, Shane McElrath burst onto the 450 scene by holeshotting and leading his heat race at Orlando 1. He eventually yielded only to defending 450SX Champion Eli Tomac. Since then, reality has hit McElrath hard, with 17-14 main event finishes in Orlando, and then he failed to make the main at Daytona. Coming into his rookie season with an injury means all of 2021 will be a work in progress for Shane, but he surely didn’t expect to struggle just making mains. Can he turn things in the right direction starting this weekend? –Weigandt