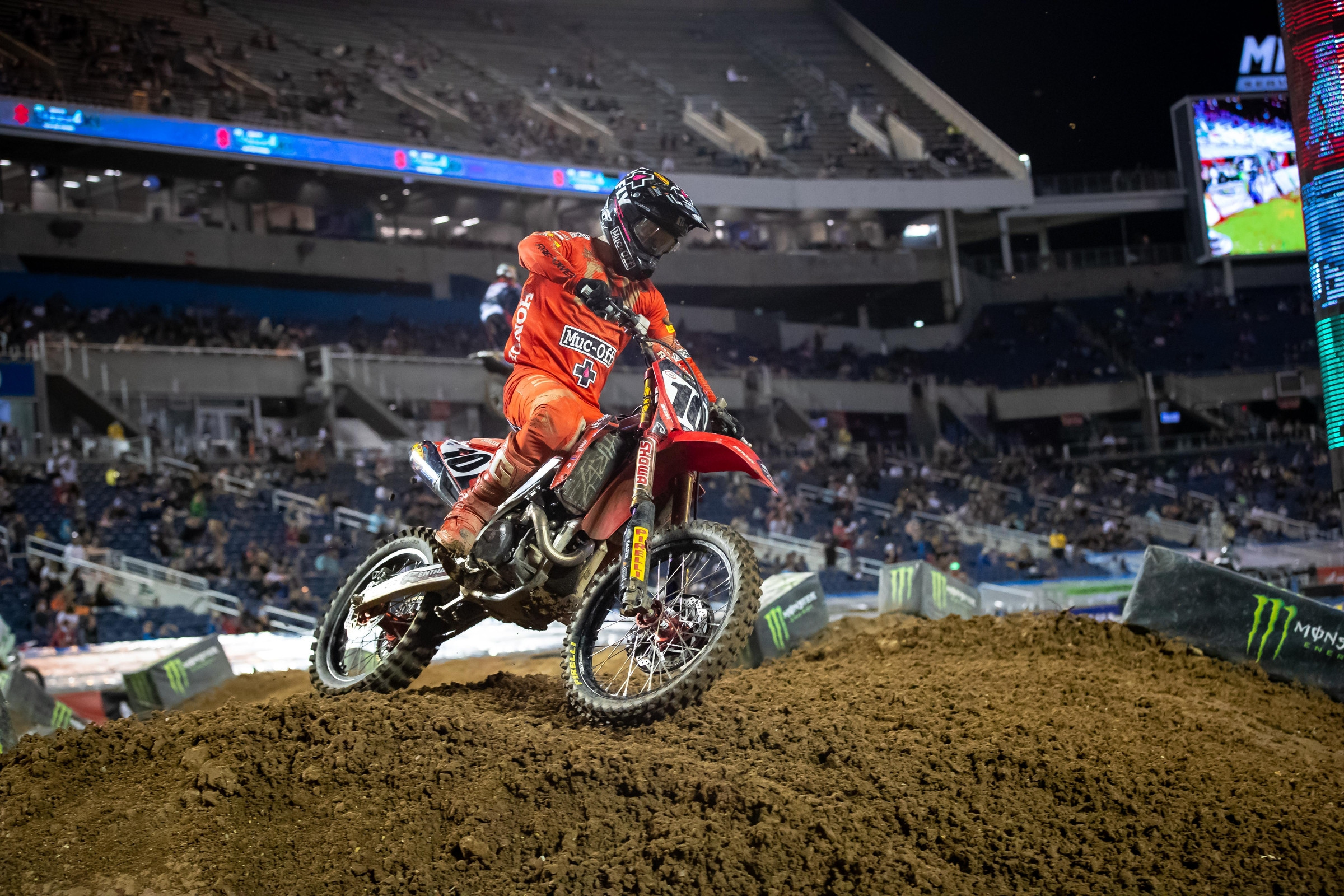 Round ten of the Monster Energy AMA Supercross Championship (the first race of three races) will take place in Arlington, Texas, on Saturday night. Check out this report for an update on who’s injured.

Comment: Brayton missed Orlando 2 with injured ribs but will return to action in Arlington.

Comment: Cartwright fractured his ankle in December, but is expected to be back in Arlington.

Comment: Cianciarulo suffered a broken collarbone at Orlando 2. There isn’t a specific date on his return yet, but it won’t be in Arlington.

Comment: Enticknap will miss several weeks due to a broken collarbone sustained in qualifying at Orlando 2.

Comment: Harlan had a big crash in Daytona that left him with a small brain bleed, broken left elbow, broken wrist, and rib and lung injuries. Currently there is no timetable on his return.

Comment: Politelli suffered a concussion and AC separation in his shoulder at Daytona. He hopes to be back for Atlanta.

Comment: Stephenson sustained a broken wrist, fractured sternum, and two broken ribs during qualifying at Indy 3. He’s out for the season.

Comment: Cantrell is out for the immediate future after breaking his collarbone in Orlando.

Comment: Carroll is likely out for the season after sustaining a broken sternum, foot, and a pair of ribs.

Comment: Castelo, who has a hurt hand, missed Daytona after crashing in his heat. He is out for Arlington 1 and probably longer.

Comment: Crown crashed and was knocked out for a while in Daytona. He’ll rest for a few weeks, and if it’s determined his head is okay, will return for Atlanta.

Comment: Gardner hopes to return to racing in Atlanta after sustaining a compression fracture in his lower back and an inferior pubic fracture in his pelvis before the season.

Comment: Gonzales is out for the season due to a broken tibia/fibula and talus.

Comment: Lopes is back on the bike and should return to action at Arlington 2 after dislocating his shoulder and hurting his wrist in Houston.

Comment: Martin dislocated his left shoulder in a big crash at Orlando 2. He’s working on healing up, but it’s unknown when he’ll return.

Comment: Owen tweaked his knee after Orlando 2 and missed Daytona but will race this weekend.

Dilan Schwartz – BANGED UP | OUT

Comment: Schwartz sustained several minor injuries that will keep him from racing at Arlington 1.

Comment: Smith was somehow able to race the Daytona main event after another rider’s footpeg left a gash in his backside that required roughly 20 stitches. He hopes to be ready for Arlington 1. Smith will skip press day but plans to line up on Saturday night.