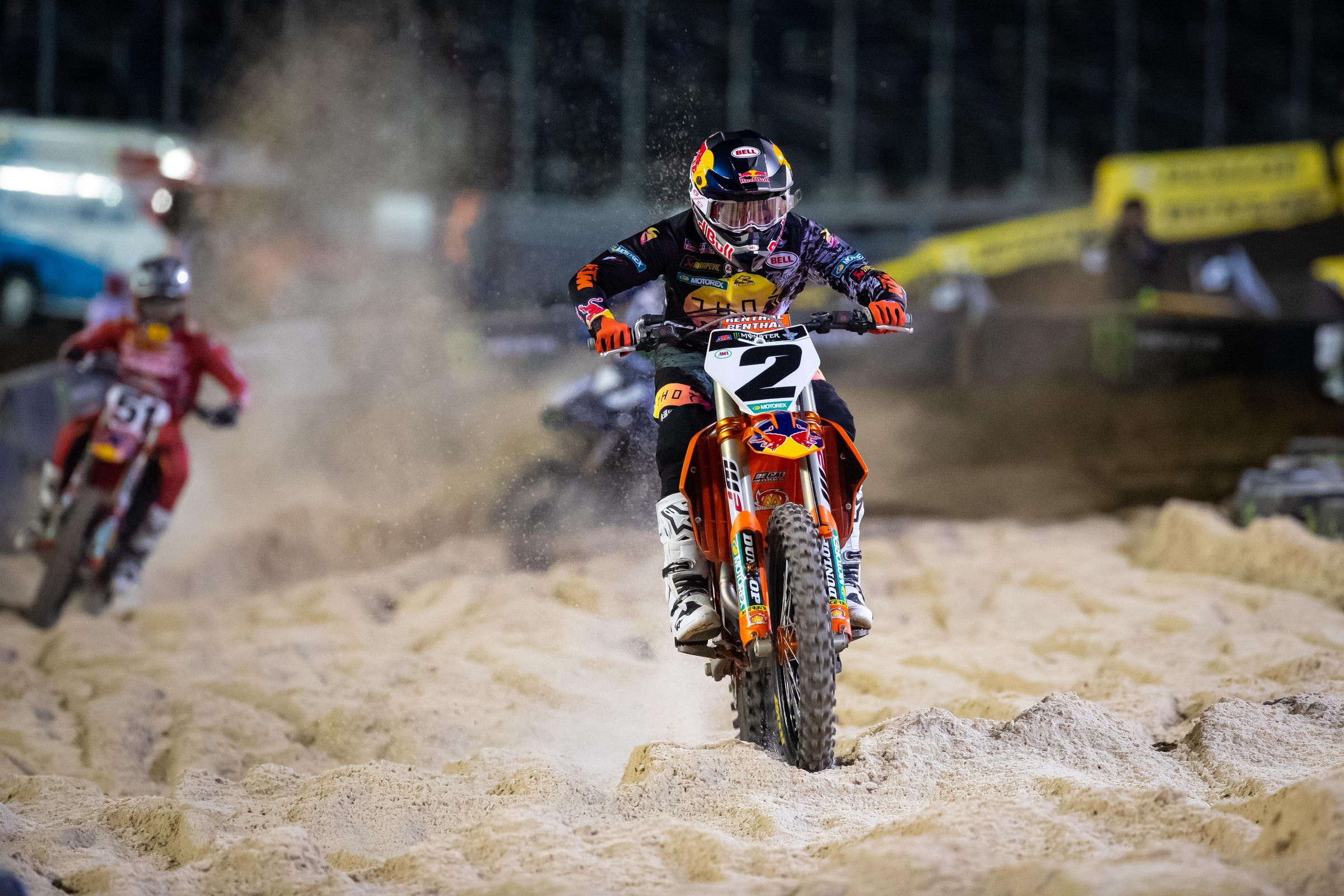 Red Bull KTM Factory Racing’s Cooper Webb put together a solid charge late in the Daytona Supercross to capitalize on a mistake from Aaron Plessinger and snag second place behind Eli Tomac. But Webb isn’t being talked about for his charge, but rather the interesting championship dynamic now taking shape between himself and championship leader Ken Roczen. Roczen was not too happy with Webb running him to the Tuff Blox in the second corner of the race, and the German voiced his displeasure on the podium.

When the dust was settled, Webb joined the media via Zoom post-race to discuss the pass and how his night went.

Racer X: Cooper, take us through that first lap. You made a really key pass on Roczen. I don't think Roczen was too happy about it. Just take me through that move that you made there.
Cooper Webb: Yeah, it was second turn, and I had a great start. Me and Ken and Eli were all right there. Eli was on my inside and Kenny was on my outside, so I kind of just went through the middle there and wanted to make sure I could get ahead of Ken. Just made the move right there in that second turn and then followed in behind Eli. I was a little tight there at the first half of the race. AP was riding really well and got around me. Him and Eli were really putting down some good laps there at the beginning. I had some things to figure out, but as the race got going, I started getting better and figuring some lines. I was able to make that last lap effort there at the end, which was critical. Overall, it was a good night of racing. Points-wise it was almost as good as you can get.

Just to elaborate a bit more on the pass. Did you hear anything that Roczen said from the podium after the main event at all?
Yeah, when we got back, he was running his mouth, but I didn’t really hear what he said on the podium or anything. He wasn’t too pumped, but I’m not too sure why. I saw an opening and went for it. He’s really focusing on himself this year, and clearly, he showed how much he’s focusing on himself.

Do you think in a few weeks’ time you’ll look back and you’ll say, “This was the race that made my championship?” Do you think this was such a critical saving grace of where you finished today on the podium?
Yeah, I would like to think so. Everyone jokes and says [the series] starts at Daytona. Every race is important absolutely, but we’re at the back half of halfway now. Plenty of racing left, but points are crucial. At this point, it can go either way. So, tonight was definitely crucial to make the most of it and get a second place. Honestly, I didn’t gel too well all day, so I was super happy with this second. Like you said, I think later down the line I’m sure that I’ll look at this race and say it was a crucial one for sure. Even just with the attitude of the championship and stuff like that. We’ll see where it takes us, but happy with the night and keep plugging away.

How far off do you go off your settings for this Daytona race? Obviously, you guys probably build a Daytona section. Do you think that stuff actually helps when it comes to this race, or is it a little bit being too prepared, as I’ve seen in my experience before?
It’s cool that everyone does it and goes out of the way to make it happen, but I started pretty soft today and just kept stiffer, stiffer, stiffer and really wasn’t far off from what I’ve been racing all my other races. So, it’s easy to overthink. That’s for sure. You never know. It always seems to me they’re adding more sand, and that’s hard to get your bike right no matter what. But to me the rhythms tonight were for us normal rhythms, the high speeds and stuff like that. But there wasn’t many moguls. or anything like that, like the outdoor style that they kind of throw in. It was more to me like full rhythms and then just obviously the sand. The one straightaway was just pretty much singles the whole time. It’s cool to switch it up and ride a Daytona section, but to be honest, I don't think it ever really is relevant when we get there.