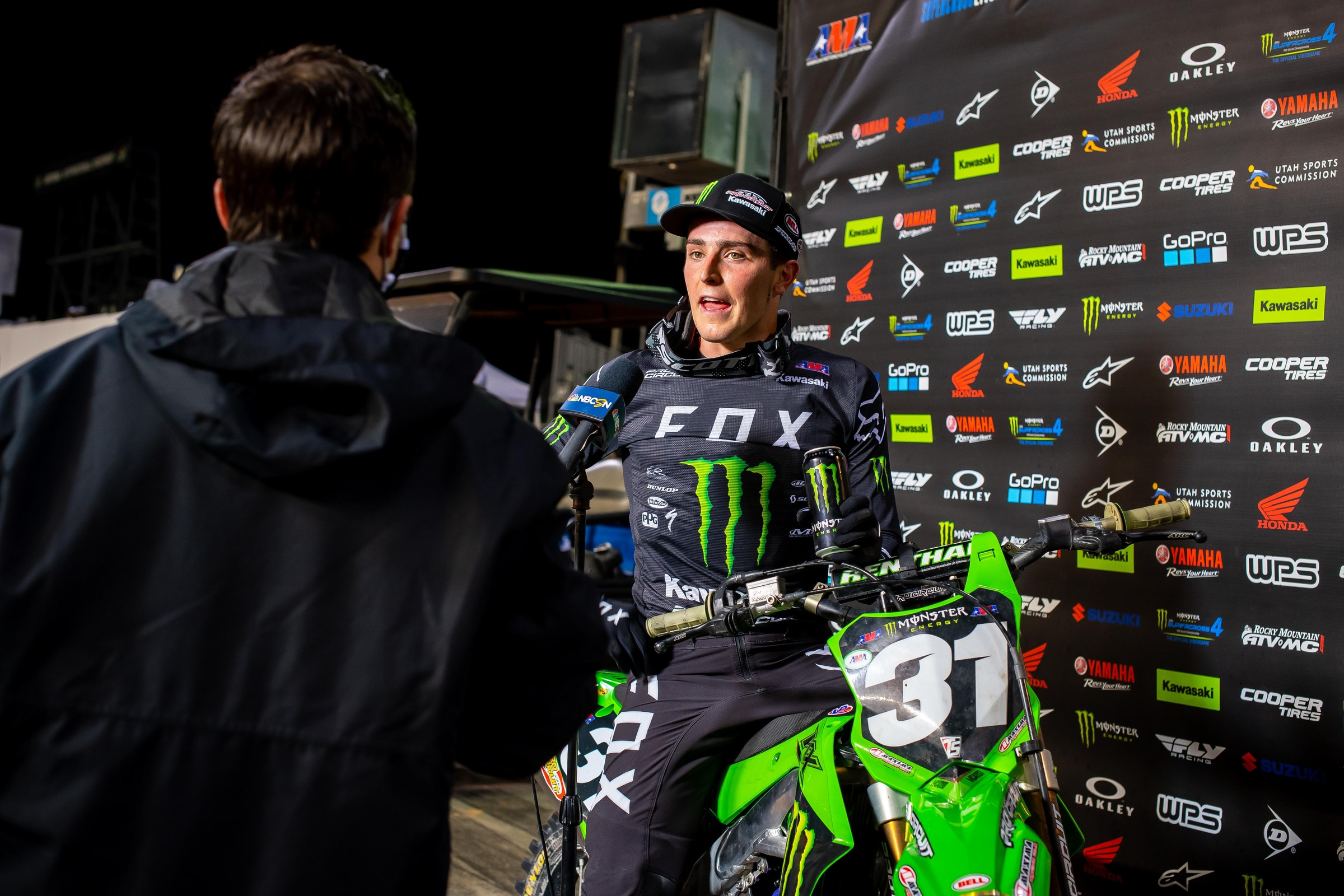 Two years ago, Cameron McAdoo was left without a ride after the Monster Energy AMA Supercross season ended. Putting his head down and not letting his situation keep him out, he worked his way onto Troy Lee Designs/Red Bull KTM as a fill-in rider that summer. With consistent rides, he proved his worth to Mitch Payton at Monster Energy/Pro Circuit Kawasaki. In now his second year with the program, McAdoo repaid Payton by claiming his first career supercross victory on Saturday night.

After the win, McAdoo spoke with the media via Zoom.

Racer X: Cameron, obviously today was your first 250 win. You’re leaving here with the red plate. Take us through those emotions. We’ve seen when you went over the finish line, you were so pumped. Take us through those emotions and sort of leading into the next round and the motivation it’s going to bring.
Cameron McAdoo: I’ll probably have better words tomorrow, but it felt great. It feels great right now. We had a really good day all day. I felt good in practice. I qualified second. Usually qualifying is not my forte, I guess, but I’ve improved on it. Won my heat race and then just didn’t get the best start in the main. I just focused forward and did my best, and it felt great, and it still does. To win is amazing. It’s my first win, and to win here in Daytona is even cooler. On top of that, we’re going into the third round with the red plate. It’s very motivating. We’re going to continue to work this week and go to Texas with some good momentum. So that was a good one.

What will you remember about your first victory twenty years from now? You said you’d have more words tomorrow. When you think about tonight when you get older, what do you think you’ll remember about this night?
Honestly, going over the finish line and getting to ride up to the wall and do that burnout. That’s probably one thing that you’ll never forget. That feels good. Then getting over to the podium and pulling up to the team and everyone that’s done all the work together… It was pretty emotional. It was really fun. We really enjoyed it. Those are the two things. I’ll always remember that for sure. They always say your first one feels good, and it really does. I’m stoked.

It wasn’t that long ago that you got a fill-in ride with TLD. You were kind of a last-minute spot there at Pro Circuit. You’re the points leader now. You just won Daytona. It’s really cool where you can tell other riders, I was at the bottom of the barrel a little bit and had to fight for jobs and now look how things can turn. So, you’ve got to be so super stoked on where you’ve been and where you’re going right now.
Yeah, totally. I don’t want to put this crazy, huge rags to riches story together, but that’s kind of how my story went. I’ve had some really good opportunities throughout my career, even starting my pro career and going back to riding for the MotoConcepts guys. They believed in me, and there have been so many people along the way who have believed in me. I think the most important thing is at times when I would go into the off-season with no ride, I would just go buy a bike and keep training. I think those are the times that make this this much sweeter and that I think make it feel this good, because those times were tough. I feel like I’ve earned my keep here and I’m really excited to be in this position.

You mentioned working with Nick Wey. He’s a pretty high-profile guy. You’re on a high-profile team. I think you train with Adam Cianciarulo who is a high-profile guy also. How did you find yourself working with those guys?
Actually, it was when I first signed with Pro Circuit Kawasaki. I reached out to Nick Wey. I felt like he had things that I could really benefit from. It was kind of a far shot. I was like, I’m not sure if he’ll be willing to work with me or have the time, so on and so forth. So, I reached out to him and he was very motivated to work with me. He was like, “I feel like we could help you in a lot of ways.” So that’s where it all started. It’s really fun to be able to train with Adam. He’s won on this bike. He’s been with this team a lot, too. It’s good. I can learn a lot from him. I learn a crazy amount from Nick. He has a lot of knowledge in the sport, and he’s been through it. He really helps me. He gives me a calm sense and is really doing well at teaching me what I need to do better at. That’s kind of how it all happened. I’m really enjoying working together with those guys and getting to ride with Adam as much as we can and just hitting the gym together and everything like that. I have a really good group around me, and I’m stoked on it.