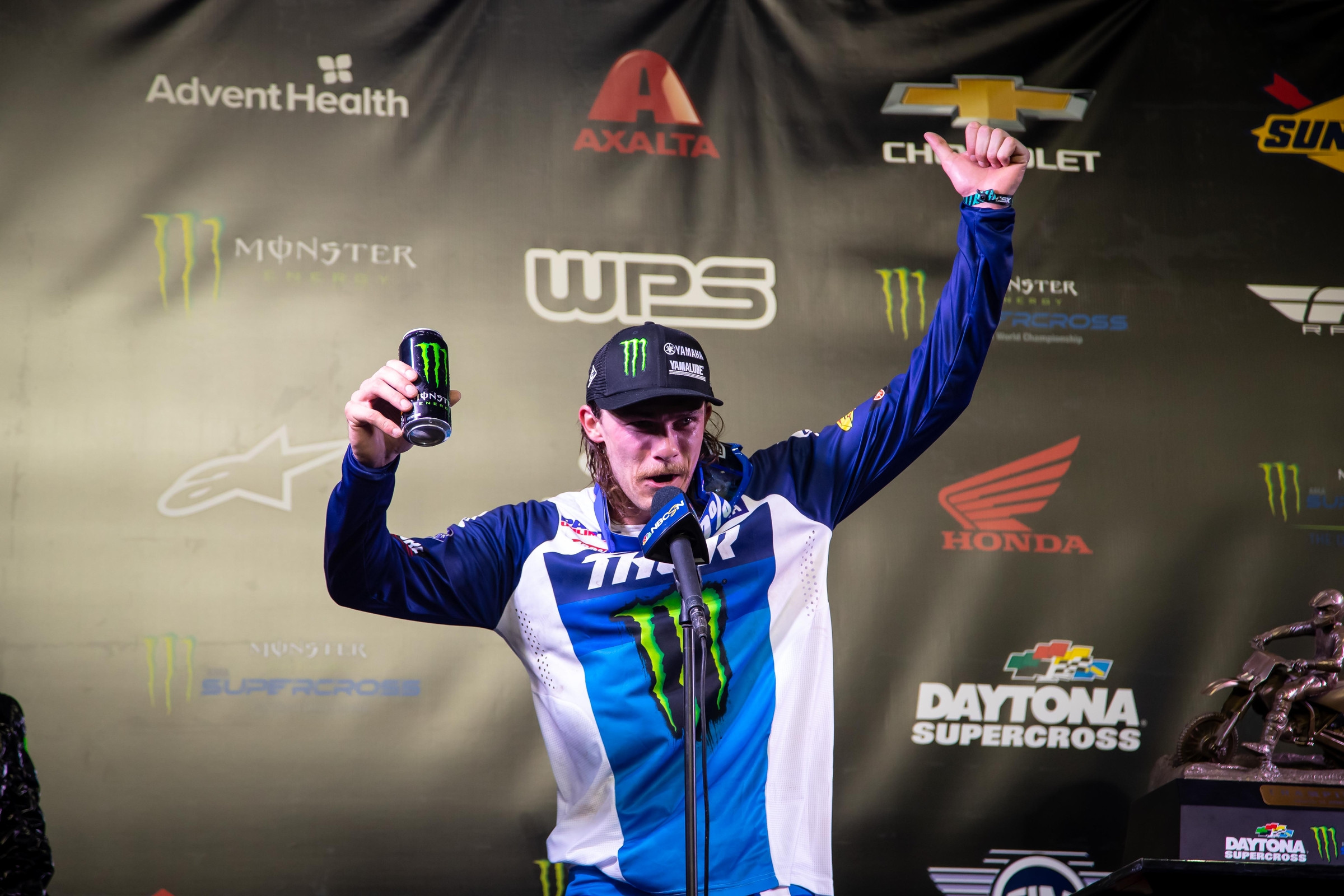 3 on 3 Plessinger, Robertson, and Brown

The Daytona Supercross always provides some unique stories, but perhaps the most notable rides on the night came from three riders who didn’t walk away with the win in either class. For Aaron Plessinger, a rough two-year stretch in the 450SX class was finally laid to rest with his first career podium on the big bike. Stilez Robertson led much of the 250SX main event in just the second supercross race of his career before settling in for an impressive second-place finish. And Pierce Brown, who was making his return to racing this weekend after eight months following a knee injury, put together his best career ride to round out the podium in the 250SX class.

All three riders spoke with the media via Zoom following the race.

Racer X: AP, what a ride. You were great all day and night. Some sort of super-secret Daytona testing? Did you make some changes to the bike? What was the genesis of this amazing ride? This was really good. Can you tell us about the week coming in? Is this a Daytona thing only, or are we going to see this more often?
Aaron Plessinger: No, you’re going to see this more often. We’ve been putting in the work. We’ve been testing. We’ve been trying things left and right. I’ve been kind of a guinea pig with it, which I appreciate. I love trying new things, especially if they work. We’ve been putting in the work at the farm and we made a lot of good changes. It was an awesome day from the get-go. Qualified eighth. The heat race went awesome. Starts were great all day. I loved it. It was so much fun. Wish I could have kept it up there at the end, but Coop [Cooper Webb] outplayed me. All I could ask for was a podium. It’s been two years since I’ve been in the 450 and this is my first podium, so it was a long time coming.

Was that probably the best third-place trophy you’ve ever gotten? Breaking your heel here a couple years ago and then making the comeback to get up there tonight. Talk about that.
Yeah. I definitely think you could say that. I’ve had a rough time here. My first year here I had the flu. Second year here I shattered my heel. Last year was alright. I was definitely due one here. I think I got it done tonight and couldn’t be more happy.

Does this track being a little bit of a hybrid motocross, did that play into the favor for you? Or was it because it’s a tough track, or was it just your night?
I think a little bit of both. I really like this track. I’ve raced it as an amateur and had some success. I think it was my night, as well. I had a really good day. I don't think I’ve ever qualified… If I’ve qualified in the top ten in the 450s, it’s been a pretty good day for me. I don't think I’ve done that before. The heat race was awesome and the main was even better. I think I’m going to keep this going and hopefully click off some podiums here in the next few weeks.

How did your battle with Cooper Webb in the heat race help you when you guys were going at it in the main event? Were you able to say, “Oh, he did this in the heat race, I can work and make up time on him here?” How did you benefit from battling him earlier in the night?
In a sense the lines were really, really different. I knew I was faster in some sections, but he was really, really good in others. I knew if I could get close to him, at least before the sections that I was better than him, I could really reel him in and try to make the pass. The inside on the sand section was dodgy. It could have been good or bad. You never really knew. So, I just kind of sent it in there and was hoping it was good, and it was. I made the pass, and it was a clean pass.

Racer X: Stilez, I’ve lost count of how many times I’ve seen you on Ricky’s amateur races on the podium. You seem like you’re always super focused. After last week basically not even counting as your debut, what does this mean to get a podium after a debut like that and to get it at Daytona?
Stilez Robertson: After last weekend I kind of went back to the drawing board. I was a little down in the dumps, but I knew I didn’t really get a fair shot at it. Coming in this week we had really good prep at the Baker’s Factory. Honestly, all day I was getting better and better. Then right before the main I made the decision to put the knobby back on and it paid off. Got the start. Honestly when I got out front, I didn’t know no better, so I just started putting in my laps. Then it set in. Halfway I’m like, “Wow, I’m leading Daytona right now.” I didn’t really get tired or tightened up in the arms. It was more so just mental really. I was just like, “What do I do now?” But that was good. McAdoo got around me and I knew he had good speed, so I just wanted to salvage it and bring it home on the podium.

You sort of touched on it earlier on, the rough start that you had last week, round one. To bounce back this week, this has got to be a big shift in confidence for you but was it also to do with the track or was it more just a bit more luck went your way this week?
I’d like to say just a bit more luck. Got a good start. I believe in my ability and I feel like I’ve had pretty good speed this off-season. Honestly, I’m just trying to build every race. So, we’ll go from here and just show up to Arlington and try to get better every race. I’ll take this one and hopefully we can get one step better, but if not, we just want to do better every time we get out on the track.

Racer X: Pierce, it’s been a long road. You mentioned some highs and lows on the podium. Talk a bit about that. Did you expect a podium out of yourself tonight?
Pierce Brown: Yeah. It’s been a long time coming. I was off the bike for four and a half months. It’s been about eight or nine months since I’ve lined up. So, first race back, just the nerves felt like it was my first race ever. I did not expect to be on the podium, but I’m not complaining. I knew all the prep that we’ve been doing, I was capable of it, but I just felt like it would be a couple more rounds until it happened, but it happened first round for me. So, I couldn’t be happier.

It was a building process for you—injuries in the last season and then coming back first race and doing well. Talk about that a little bit.
It’s definitely been a building process. I didn’t get any off-season. I got maybe six weeks, but still that’s three months less than what I was wanting. I came in super unprepared. I just kind of rode out there. I knew I was unprepared. I knew I didn’t have a full off-season. But I trust my ability and just went out there, rode my own race and got in a flow and next thing I know I was in third place. Justin Cooper was right on me on the last lap. I don't know how close he was, but he was right there. Just had to put my head down, dig deep and make it happen. It’s just been a process, for sure. A lot of highs, a lot of lows. This is definitely one of the highs.

In the main event and obviously first race back, on the podium, last lap you could hear Justin coming behind you. What was going through your head? Obviously, you want to keep this thing on the box, so where was your head? What were you thinking the whole time?
I was just trying to stay calm out there, but my mind was going crazy, just from the start. I had a really good start, but I just got pinched off in the second corner. Then I found myself in sixth or seventh. Had some work to do. Some guys fell, but I was making passes left and right. I don't know if it was before or after halfway, but I found my way into third and then just kind of settled in, put my laps down, and I heard a Star bike behind me. I knew it was [Justin] Cooper for sure. As I was going out of the sand, I could see him coming in. Then two laps to go I lost track of him, so I was like, “He’s on me. I’ve got to go.” Then I see the white flag and I just told myself I had to just dig deep, make all the rhythms. That rhythm before the finish was really tough, that three-three-three. Just to get it every lap was a struggle. So, I just had to hold my breath until that section, put it down, and I was home from there.