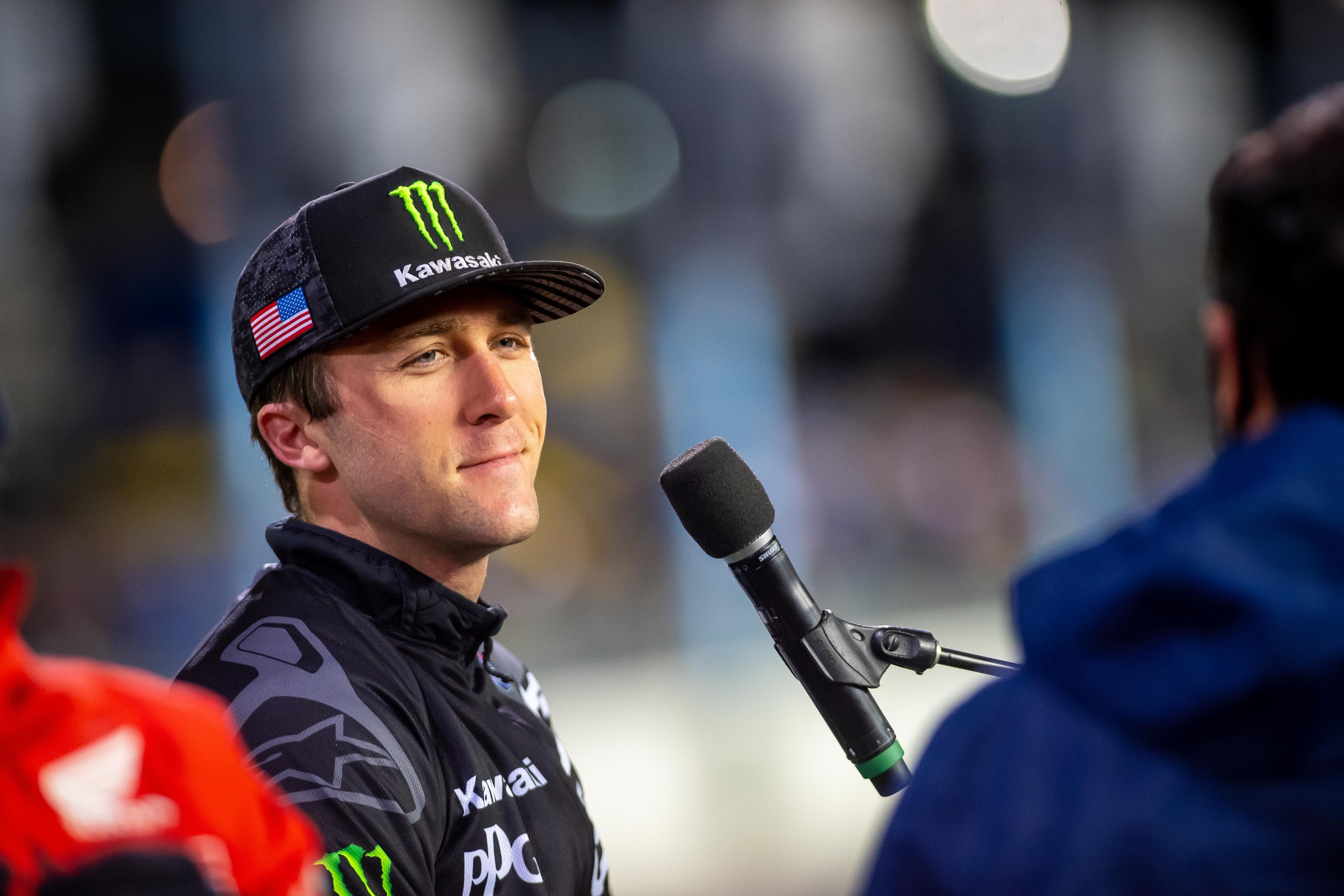 It wasn’t a shock to see Eli Tomac put together another incredible performance to win his fifth Daytona Supercross, but Tomac’s emphatic celebrating after told a different story. The defending Monster Energy AMA Supercross champion has not had the title defense he was hoping to by this point with just one win at Houston 2 leading into Daytona. Winning this past weekend was huge as it finally righted the ship in a way. Now just 24 points down in the championship with eight races to go, Tomac might have a new outlook on the rest of the season.

He spoke with the media via Zoom following his record tying victory.

Racer X: Eli, you said during the broadcast in this pre-recorded thing that we saw that you’re not about records. You’re not worried about it, but it would also be cool to get that fifth win and tie the record here at Daytona with Ricky [Carmichael]. Now that you’ve done it, what does it feel like just to get five of them here at this legendary race?
Eli Tomac: It’s a little hard to believe. Five out of the past six years is more than I would ever have expected. Like I said on the podium, I can only credit it to just the track. It just fits me. Whether they like it or not, certain guys are better in certain conditions. This style is me. So, that’s what gets me there. Tonight, we had a great start from the beginning. That was key, crucial as usual. Just having fun on the bike here.

That start too, it wasn’t like it was a great start from the drop all the way. You made a move in the first corner. Kind of take me through that decision and how you pulled it off. You executed perfect. As everyone drifted wide you cut under and cut under again. Take me through that moment and the decision that you made to make that move.
I was like sixth pick. My goal was just to be probably the second guy in line going into that first turn, because I knew I was too far inside to really get the holeshot. I knew I was going to get swept. But as long as I was number two, from watching the previous races I knew I had a chance to come out top five there if I controlled the inside being number two at least. So that’s exactly what happened. I got in front by turn three and turn two.

After you win so much, sometimes it becomes a little second nature and these don’t seem so monumental. You really celebrated this one tonight. When you went over the finish line you looked directly into the crowd, went up to the wall, burned off the tire. After not having such a dominant season this year, how does this one rank in other lists of achievements, especially for how it’s a must-win situation for your title?
Yeah, I needed this. Like you said, I’ve struggled the past three or four rounds. Really struggled. Just not being me, if I want to say it that way. Like I said, I’ve been looking forward to this race at this point the way the last few have gone. I’m still in a pretty good hole points-wise. I’ve got a lot of work to do. That being said, it kind of makes me feel like I’m still somewhat kind of in the game, as to where if I would have got beat by Ken [Roczen] and Cooper [Webb] again it’s like, wow, I’m really out of the game now. So that was big for us.

I wonder if you could talk a little bit about in light of your pedigree and your championship history, can you talk a little bit about where you are, what the media says or doesn’t say about your intensity or your focus maybe, or your lack of podiums so far this season? Are you aware of that, or are you more so in tune with your testing and training? Is that something that you just sort of tune out?
I do what I can to tune out. Whether you like it or not, you do see some things or read some things. But for the most part, I’m a pretty quiet guy on the social media stuff. When I have a bad race, I’m not reading other things as much, because the only guy that really knows is myself and the team on that current situation or that night. That’s my outlook on it, and that’s it. For this year, yeah, the last few races have not been good, not where I expected myself. I have work to do that way.

As you look a little deeper in the season, you see those three rounds there at Atlanta that are also at a speedway. Does that give you a little bit of confidence going into the back half if you can get through Dallas pretty good to get back in the title shot?
Yeah. I’m looking at those and I’m like, those are going to be good for us. There’s certain tracks, certain stadiums that I would say just suit each other’s riding styles and our motorcycles. The high-speed stuff I think is going to suit me. So those are the rounds I’ve got to make those work. Looking at those, those tracks look massive. It will be pretty cool to see how those are built.

I know that you’re tied with RC, but you win the tiebreaker with that burnout. So, if you get a number six, how are you going to top that?
I don't know. You know what was cool? It’s not cool that the fans weren’t right there, but that’s how I was able to stick the front end up on the wall and then put the wheel on the wall. Normally you don’t have the wall to push up against, so that was that. We’ll see what happens.

I know how much you hate this kind of attention during the week. Was it distracting with you struggling this season and you having to worry about all these questions about tying RC’s record?
I don't know. It was just talk to me. I always know I have a chance here, so I didn’t really mind it.

Was there any particular improvements that you made with the weekend off that could potentially help you as we’re getting to this back half of the season?
Not anything out of the ordinary. My body felt good all day physically. I was on the whole main. That was key. Maybe it was just clean air, but no major game-changing things to the motorcycle or to the program.