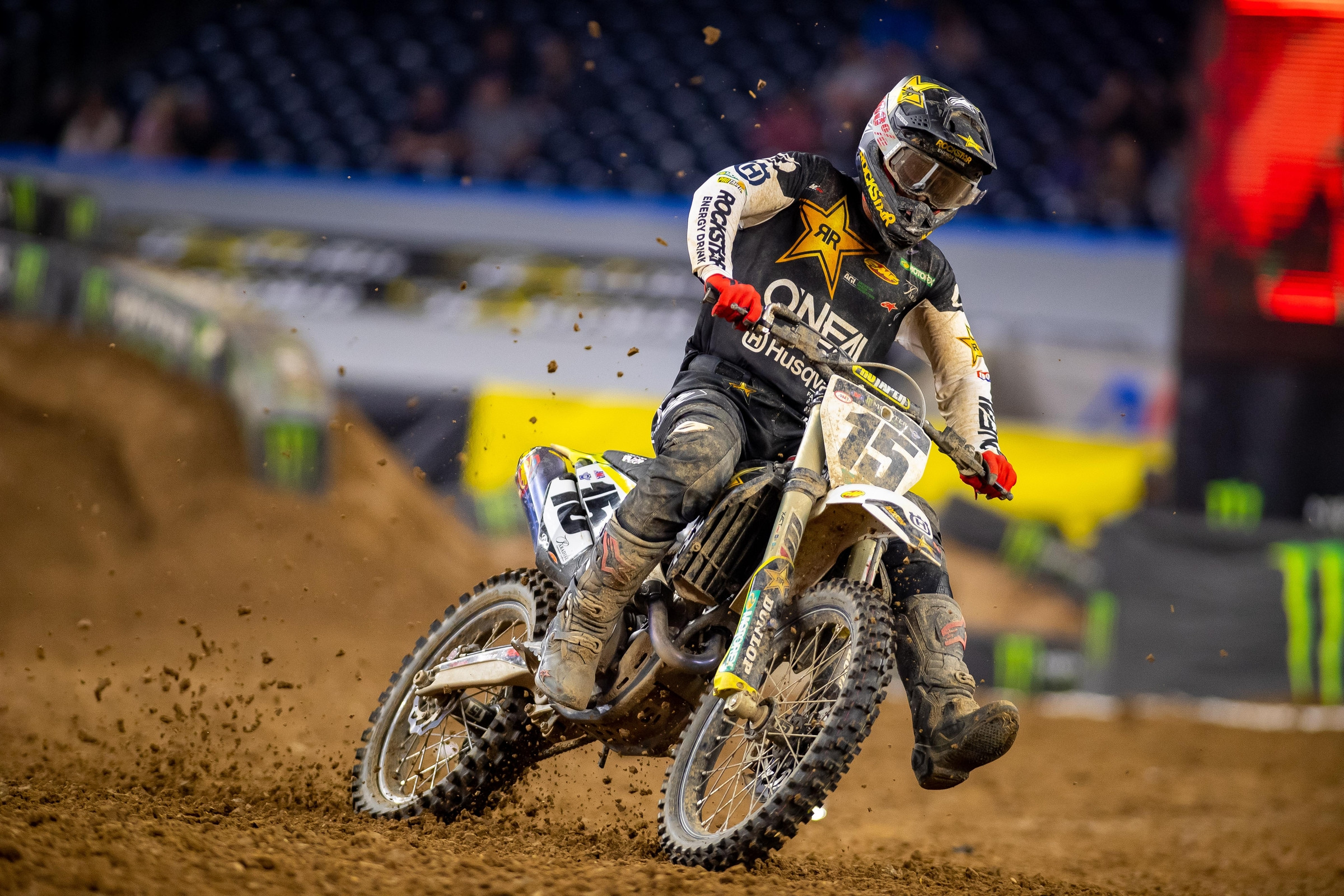 The gate is set to drop on round six of the 2021 season of Monster Energy AMA Supercross on Saturday night. Check out this report for a list of who’s dealing with injury.

Comment: Anderson dislocated his finger during qualifying at Indy 2 and missed the night show. The team is waiting on the results of an MRI to determine his status for Saturday.

Comment: Anstie suffered a back injury before the season. He’s slated to race his first race of the year in Orlando.

Comment: Noren has had quite a few get-offs this season and is pretty banged up. After hitting his head during qualifying at Indy 2, he pulled out for the night. He’ll be back for Indy 3.

Comment: McElrath will return to racing in Orlando after injuring his shoulder before the season.

Comment: Miller sustained a wrist injury last summer that’s kept him from lining up since. He’ll return to racing in Orlando.

Comment: Politelli crashed during practice at Indy 2 and took a hit to the head. He’ll sit Indy 3 out but will return in Orlando.

Comment: Sexton has been hoping to return to racing at Indy 3 after injuring his shoulder at Houston 2 but Honda HRC has confirmed he will not be lining up this Saturday.

Comment: Wilson is hoping to return to racing in Orlando after he broke his big toe last week when he hit a false neutral while practicing.

Comment: Albright suffered a knee injury during qualifying at the first Indianapolis round and has opted to undergo surgery in order to fix his issues. He will be out for the remainder of supercross. He posted the following on Instagram:

“I’m in disbelief an very bummed out. Unfortunately my season has come to an end an I will have to go into surgery next week to get my knee fixed I’m sorry to everyone that has put time an effort into me but I will be back again very bummed out but everything happens for a reason Thank you to everyone!”

Comment: Forkner will miss all the Indy races due to a broken collarbone suffered in practice in Houston. He’s had it plated and there’s a chance he might race at Orlando 1.

Comment: Hampshire sustained a dislocated right wrist, a fractured metacarpal in his left hand, and chipped a bone (ulna) in his forearm during practice in Houston. At the moment it’s unclear when he’ll return to racing, but it won’t be at Indy 3.

Comment: Lawrence crashed hard in his heat race at Indy 2 and, although he won the LCQ, ended up pulling out of the main event. On Instagram Lawrence said he’d do everything possible to be ready for Saturday, but at time of posting we didn’t have confirmation from the team on Lawrence’s status.

Comment: Short got caught up in a first-turn crash in the main event at Indy 2 and got banged up. “Sometimes you’re the hammer and sometimes you’re the nail,” Short said on Instagram. He’ll make a decision on Friday whether or not he’ll race on Saturday.

Comment: Vohland crashed in the whoops during qualifying at Indy 1 and sustained a dislocated hip. He’s doing well, but a return date hasn’t been set quite yet. He’s out for Indy 3.

Comment: Cooper crashed while practicing and suffered a broken bone in his foot. He expects to be ready for the first round of the 250SX West Region.