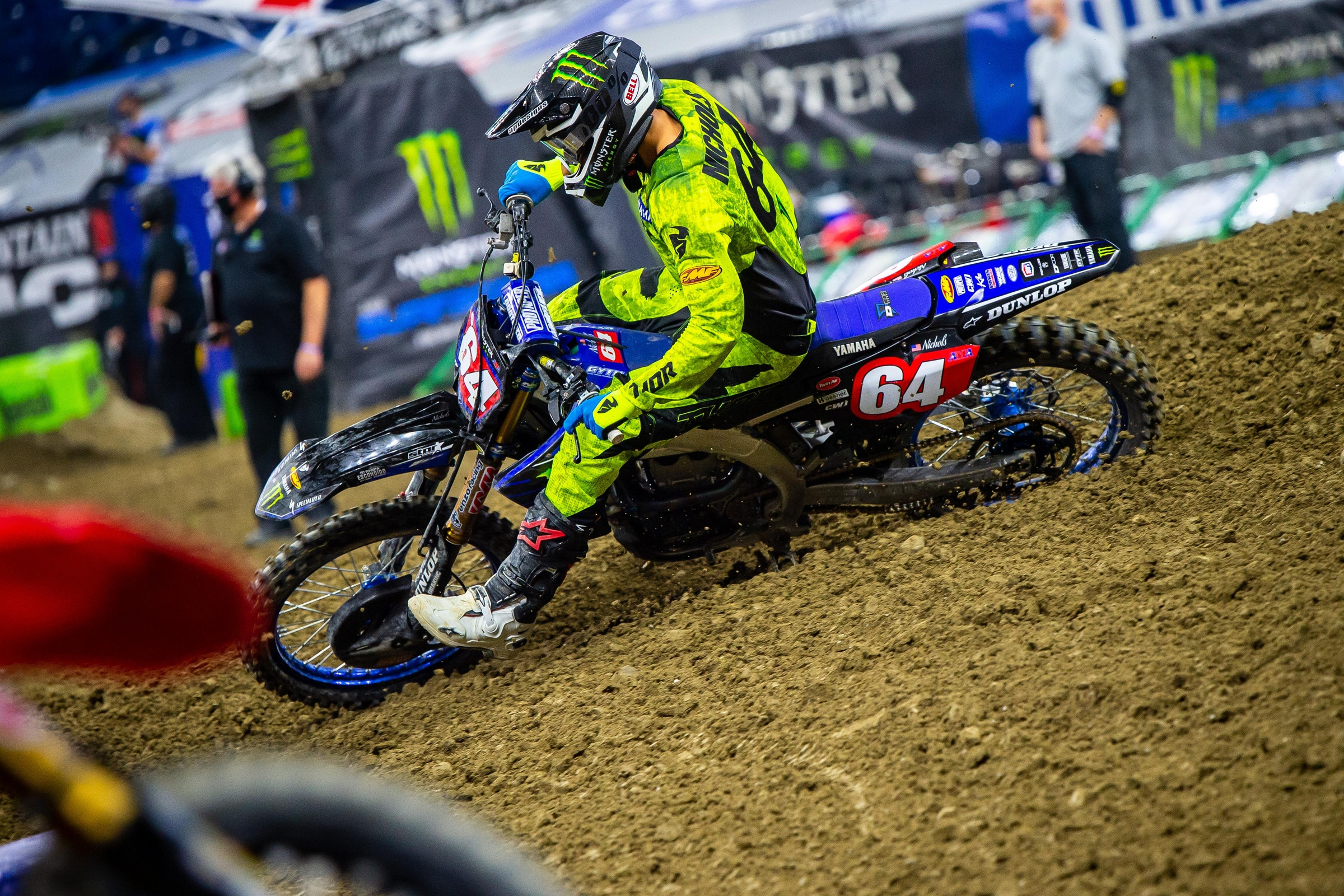 For the fourth time in 14 days, we put another round of Monster Energy AMA Supercross behind us with the first of three rounds in Indianapolis, Indiana. As such, we fired questions off to long-time pro Jason Thomas to pick his brain on what he saw at the first race in Lucas Oil Stadium.

What was your take on the contact between Christian Craig and Jett Lawrence?

I recorded my podcast this morning (Industry Seating) and I was unsure of what caused this. Now that I have gone back and watched it again, I got it wrong on my podcast (see: awesome). Christian attempted to block Jett from making a sweeping pass around the outside and unfortunately for both of them, their handlebars got entangled. That locking of handlebars disallowed Craig from turning left and off they went into Tuff Blox land.

The track was very jumpy and combining that with the rutted Indianapolis soil, we saw some wild close calls and crashes. What was your take on this specific design/soil combo?

It was exactly what I expected. Indy in January means soft dirt and track deterioration. We will see more of the same on Tuesday. I was a bit surprised at how technical a few of the rhythm sections were because the decay was inevitable for the main events.

Ken Roczen finally has his first win, but he arguably was the best rider on the track at three of the four rounds this year. Is this the best version of Ken Roczen we’ve seen?

This is the best Ken Roczen we have seen since early 2017. That year, he was clearly the best rider up to that point. He has been the best rider thus far of 2021 but the margin isn’t anything overwhelming. The toughest aspect for Roczen is that he should have a much larger lead given the volatility behind him and yet it’s only a handful of points.

Jett Lawrence took down Michael Mosiman at Houston 3 and Mosiman paid him back in the heat race last night. Do you think it ends there?

It could and should, but I doubt it will. Jett is young and will let that immaturity and inexperience get the best of him at some point. When trying to win a championship, there is absolutely no upside in tit-for-tat drama. I was actually impressed that Mosiman struck back so quickly and effectively. I didn’t know he had it in him.

Mosiman and Lawrence find each other once again in 250SX Heat 2 😳 #SupercrossLIVE#DropTheGatepic.twitter.com/TZIkrCcXQl

Did Colt Nichols just assert himself as the guy to beat in the 250SX East Championship?

Yes, he did. He has been calm and calculated at every round so far. His riding has been superb, but it’s been a bit sneaky, right? He hasn’t jumped off the page, hasn’t gotten into any skirmishes, and yet here we are. He has two wins in a row and is now the sole red plate holder. I love the way this is shaping up for him.

I would, yes. I think we have seen the most likely winners all make their mark. Those riders that could make me look foolish would be Marvin Musquin, Zach Osborne, Adam Cianciarulo, and maybeee Dylan Ferrandis. I don’t think any of the other riders have the speed or fitness to win right now. Those 3-4 riders are capable but would need things to go their way to pull it off. I do believe we will see a fifth winner in the coming weeks, just not on Tuesday. The front few are at a very high level right now.

Not many guys planned to ride during this tripleheader but does the snowfall in the Indianapolis area right now negatively impact any training programs for the next week?

I think any riding plan would have been at an indoor facility, anyway. So, with that in mind, the snow probably didn’t hurt anything. I would expect a few guys to venture out on Thursday to put in a few laps and loosen up. I could certainly see Justin Barcia go for a testing trip with how he struggled on Saturday (given he doesn’t turn it around Tuesday).

The 250SX class is a complete crapshoot. Most fantasy teams are comprised of rookies and lesser-known riders but with that comes unpredictability and at times, heartbreak. I had both Hunter Schlosser and Devin Simonson on my team. I can tell you virtually nothing about either one of them. That’s where we are in this series. Look for that to continue as the class is decimated by injuries. Get out your Louisville Slugger and take wild hacks at your line-up. They might just pay off.

In the 450SX class, it’s almost the opposite. The big gambles are not paying off. The field is full of talent and very top heavy with elite level performances. Even riders like Benny Bloss and Vince Friese are having a very tough time logging top 15 finishes. To further that point, Jason Anderson, Zach Osborne, and Marvin Musquin are fighting for top ten placings in overall points! It’s a tough field to swing for the fences on riders like Alex Ray, Austin Politelli, Carlen Gardner, or Cade Clason. They could pull off a miracle and get in (Adam Enticknap did just that) but the likelihood of disappointment is far too high for me. This could change with injuries down the line but for now, stick to the blue-chip picks.