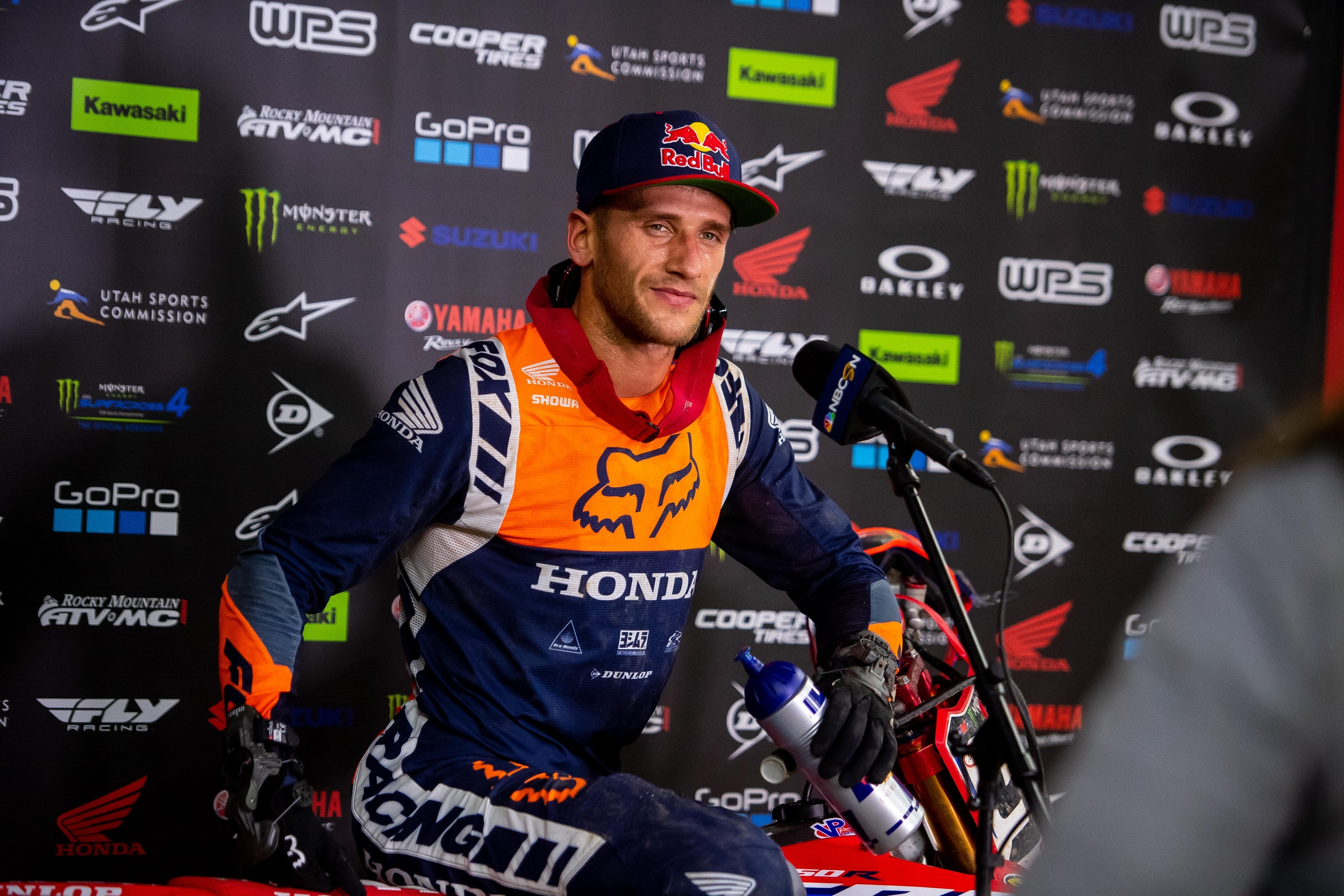 In one sense, the Houston trio of races to start 2021 Monster Energy AMA Supecross worked out well for Ken Roczen, as he heads to Indianapolis with the points lead. However, his lead could be much larger, because he was penalized four points for a red cross flag violation at round two, and then was blocked by lapped rider Dean Wilson at round three, which cost him the lead and eventual race win to Cooper Webb. That’s makes three-point loss for Roczen and a three-point gain for Webb. Now, Roczen (60 points) has the points lead with Webb and Barcia (59 points apiece) sitting close in a tie for second but Roczen could seven more points had he not been penalized at round two and then won the main event on Saturday.

Kenny has spoken much about improving his mindset this season and focusing on the positive. That’s being put to the test already. He talked about it in a post-race media session.

Racer X: Kenny, we heard you say on the podium obviously you were upset about Dean not getting out of the way. Did you feel you had it if that didn’t happen? You had a little bit of a gap. Did you feel like it was manageable what you had, or were you bracing for a last lap battle anyway?
Ken Roczen: I was basically bracing for the last five laps to battle. I had to try and play with the track a little bit as well as we ran into some lappers and stuff. I had to switch some lines up. I was ready to give it everything towards the end again. Obviously Dean being in front of me was about three-quarters of a lap or so. He said he didn’t hear me, but I’m sure there were blue flags around. The reason I went to the inside of the wall where I hit his back wheel was because I literally thought on the straightaway right there he was just going to move over to let us by. After that it was three-quarters of a lap to go and I was just ready for anything and ready for action. But I hit the back of his wheel and then I almost crashed right there. Then I jumped double-double and he ended up going super tight in that turn. I almost jumped into the back of him. I had to maneuver around him and then Cooper was to the inside. The track today was super tight. You have to really move around and outside, inside. But at the same time, a lot of it was just slot car racing a little bit. I feel like if it wasn’t for the Dean incident that the night would have been mine tonight, but obviously it happened, and let’s move on.

You have the championship lead, but things didn’t go in your favor to get you to this point. Overall though, there’s a lot of positive takeaways. You were probably the biggest question mark coming into this season. So how do you feel after these three races?
I feel pretty good. It was the same for everybody. Like Cooper said, we were dealing with a lot of traction here and a lot of different conditions than what we practice on, especially me being in California now. I wasn’t stressing about it by any means, but we were making some changes to the bike as well as something that helps with the starts. Ultimately that’s what really got the best of me in the second round was going around the first turn in 22nd. So I think we got a lot better on that. I would like to build from here and get better. I think we still got a lot in the tank. This is just the beginning. Technically going to Indy, kind of like going to a round one. Everything is tight in points. I do feel like I got robbed here a couple of times. That’s a lot of valuable points that are left on the table for me, but at the same time I’m going to move past that. I’ve been working a lot on that. I’m not going to let that faze me.

On the podium you talked about you’re working on your temper and you’re not getting mad. Was there a moment one of these years or days where you temper got the best of you and you decided it’s time to work on that?
Just something that I’m working on in general. I’m just trying to be better. Better racer, better human in general. Just something that I’m kind of working on. In the end, I think in the past years I would have probably flipped out a little bit more. Don’t get me wrong. I was mad, but at the same time it was what it was. I can’t change it at that point anyway.

Coming into this season we all obviously kind of questioned how your health was going to be. Last year there were some good races, some not-so-good races. These three races you seemed like you’re on point. How do you feel compared to last year when racing three times in a week?
It’s good. Obviously it helps out a lot not being at elevation. Right now I’m just in a good spot and just enjoying what I’m doing. I think that’s when I ride my best as well. I have a family and doing this together with them is that much more fun. So I’m just kind of feeding off of that and try to enjoy myself every single race that we go to. It’s a long season. I know we always say that, but I feel like I’m in the right mindset. We’re just chipping away race by race. We’re all so close in points. You’re one bad start away from not getting the finish that you were hoping for. These tracks have been also very, very tacky so they get super beat up and rutted, but at the same time we’re all kind of just taking the same lines. So it's been a little bit tough that way to pass on, especially with everybody going super-fast.

How did you approached this week? Do you focus on the points you lost with the red flag, the lapped riding incident tonight, or do you focus on getting ready for Indianapolis and doing some riders? What’s your mindset when you’re heading into next Saturday?
That’s an easy answer. I’ve talked about it with my crew for ten, 15 minutes and it’s time to move on. There’s a lot of racing left. Obviously a couple incidents that just have hurt me, but at the same time I’m not holding onto that. I’m just going back to Florida now and have a good time. It’s a quick turnaround. Leaving for Indy pretty much back on Wednesday or something like that. I’m just excited. We’re racing a lot at the moment and there’s a lot of room to improve. I’m just enjoying it at the moment. So I’m definitely holding onto the positive and not the negative that has happened.