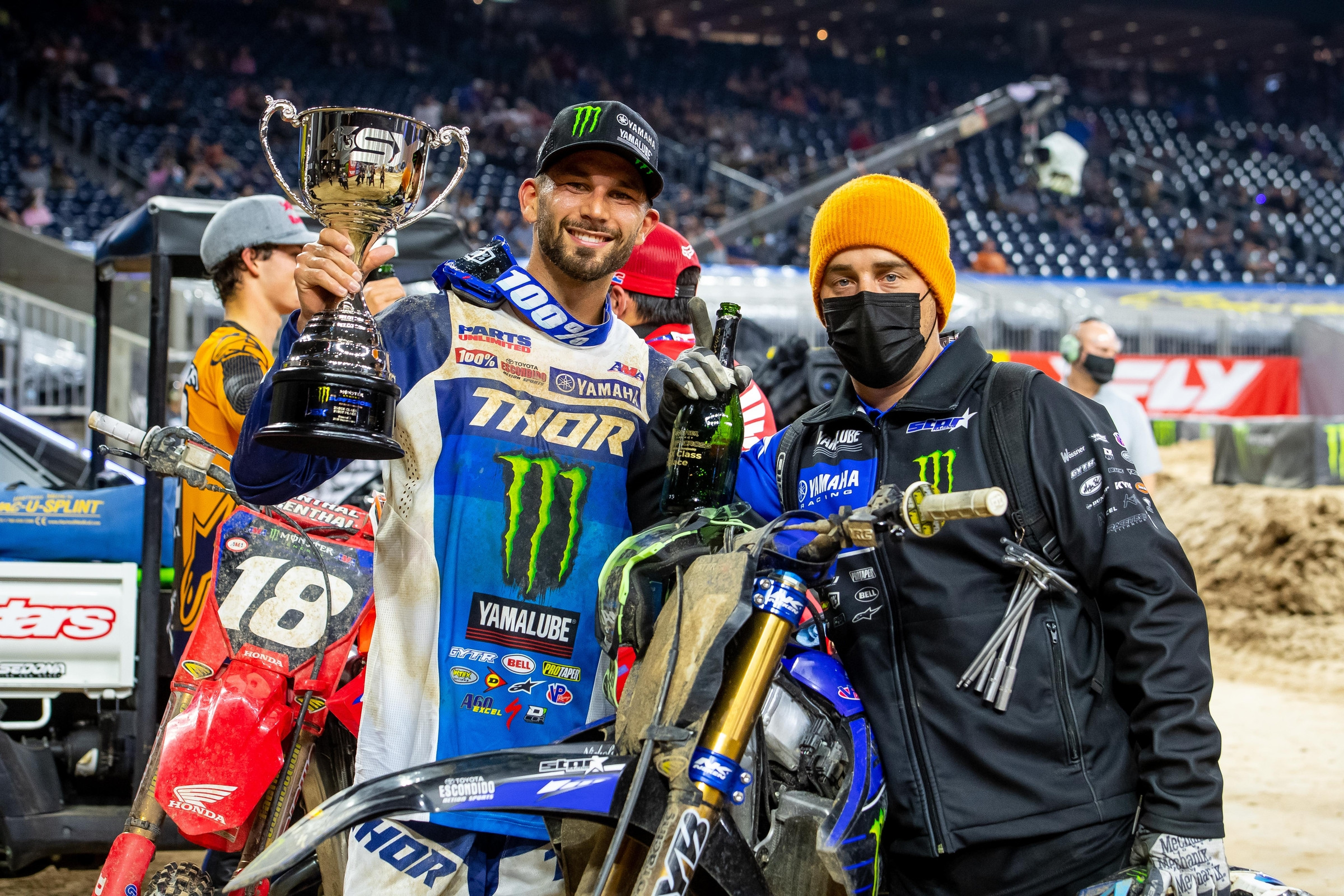 Between Nichols and Craig

For the third straight 250SX main event, Monster Energy/Star Yamaha Racing duo Christian Craig and Colt Nichols finished on the podium. Craig got the jump into the first turn and started to gap the field early, but Nichols held on and kept within reach. Eventually, Nichols was able to battle Craig for the lead, as the duo went back and forth late in the race. The #64 held on to take the race win, his first of 2021, and with Craig finishing second the two will enter round four on Saturday tied for the 250SX East Region points lead at 70 apiece.

Here’s what the teammates had to say about the third round during the post-race press conference.

Racer X: Colt Nichols, congrats on the win. The lapped riders came into play and became a pretty big issue late. If you look at the 250 class and the riders that are in there, there’s a lot of young riders, a lot of first season guys. Safe to say you’re going to be in lap traffic a lot this year. You played it well tonight. Is that something you’re looking forward to navigating in the future? I think you guys are going to be living in lapped riders for the majority of this 250 East Coast championship.
Colt Nichols: Yeah. I don’t really think most of us are looking forward to that, but something we’re definitely going to have to face with a handful of guys out and some younger guys kind of filling the slot. It made it tough, for sure. It was tough on I’m sure Christian coming up on them first and trying to navigate where to go. I was just kind of going where he wasn’t. It was tough. It felt like we hit lappers really early. I don't know what lap we hit them, but it was a little bit of chaos, especially in the heat race. I went down and had to come through the pack and it’s a little scary back there. Just tried to play it smart and glad I was able to do that tonight.

Christian, you now have three podiums starting off the season. How satisfying is this to have such a great start with the new team?
Christian Craig: Yeah, it’s awesome. It’s just kind of right where I expect to be. Obviously I had a couple years that were horrendous and filled with injury and just terrible results. So this is where I should have been a long time ago. My real speed is coming out now. I think it all just goes back to the bike, the team, the program I’m on. All that stuff just kind of comes together and when you believe in it, it all clicks.

Is this the start that it’s going to take to win the championship?
Craig: I think so. I’ve never been in this position before, so all I got to do is take it race by race and just put myself up front. That’s kind of what I’ve done. Obviously the second round didn’t go that well, but I just want to put myself up front. I tried to make the best of it. I tried to run away from Colt. Man, it felt like a normal day with me and him on a Tuesday, just pushing each other. He was able to get the better of me tonight. Take a second place and move on to Indy.

Colt, during the first half of the race you were kind of pacing, but somewhere round midway you kind of switched from pacing to attacking. Was there a moment where you were like, I can win this? I need to go after it?
Colt Nichols: Yeah, I guess a little bit. Me and Christian were kind of just trading laps. I noticed we were doing a lot of similar things. I’d pick up on a few of his lines and kind of saw where I was just a little bit quicker. I really just tried to wait my time. I think the lappers maybe helped a little bit, closed up a little and stuff like that. I just tried to be smart and really just pick my battles. I feel like I was able to do that really well. was able to just close in on him. I just wanted to keep going and keep going. He got back by me and I kind of just kept trying to apply the pressure. It just made it a fun race. It was really cool. Like I said, it felt like another day at Yamaha with me and him kind of just trading laps. It was fun. I’m glad we got off to a good start like that, and I was able to come through in the end. It was nice.

Christian, you’ve gotten a win before this year, but you’ve never really been in a title hunt. What’s it feel like to be in the title? Are you feeling a little pressure now that you got to do this night in and night out this year?
Craig: I think after the first round I felt a little pressure going into Tuesday, but we all kind of cleared that up. I went through it and now it’s just another day. Red plate means nothing. I’m here for the long haul. We’ve got a lot of races left. It’s cool to be in this position. Don’t get me wrong. I’m really happy. I feel like I have a good three round start, so we just got to keep building on this.

Colt, just curious, I kind of feel like some of us overlooked you coming into the season. Was there any added motivation? Because those of us that did overlook you, we look like fools right now.
Nichols: Maybe a little bit, but overall no. I knew what I was doing in the off-season, just trying to put in time really. I was actually able to do that this year for the first time, really. Two thousand nineteen I had a good off-season. I was able to have a good series. I kind of learned a lot from that season, having the red plate for a while. I ended up missing a race. It was a good season for me, though. I actually learned a lot and I was actually able to come in prepared for the first time in my career. I was able to do that this year, too. I knew if I just stayed healthy and was able to put my head down I would be good. It’s just kind of tough when you’re not there. Last year we only raced I think three or four races all season, supercross and outdoors combined. So I kind of knew I would be forgotten about, in a sense. So it didn’t really bother me. I understood why people weren't really putting me at the top of their fantasy picks. But I believe in my ability and know what I can do if I can come in and get a good start and come in healthy and I was able to do that this year. It feels good. Three-two-one in Houston, I can’t really complain. Move onto Indy and try to keep it moving.

Colt, it seemed like you were pretty confident coming into the season because of the off-season, but does this win give you a little boost? Or do you kind of feel you already at that level already?
Nichols: I think a win always kind of gives you a little bit of a boost, just kind of proving to yourself that you actually can win. It’s just a good feeling. I was happy with where I was, three, two on the first two races. I felt like I was riding well, just wasn’t putting myself in a great position off the start on the first two races. I was able to do that tonight and kind of hunt Christian around the whole main, and we were just kind of trading laps. So it does give me a little boost. It feels great. We’ll be sharing the red plate, which will be kind of cool for the team going into Indy, so I’m looking forward to it.