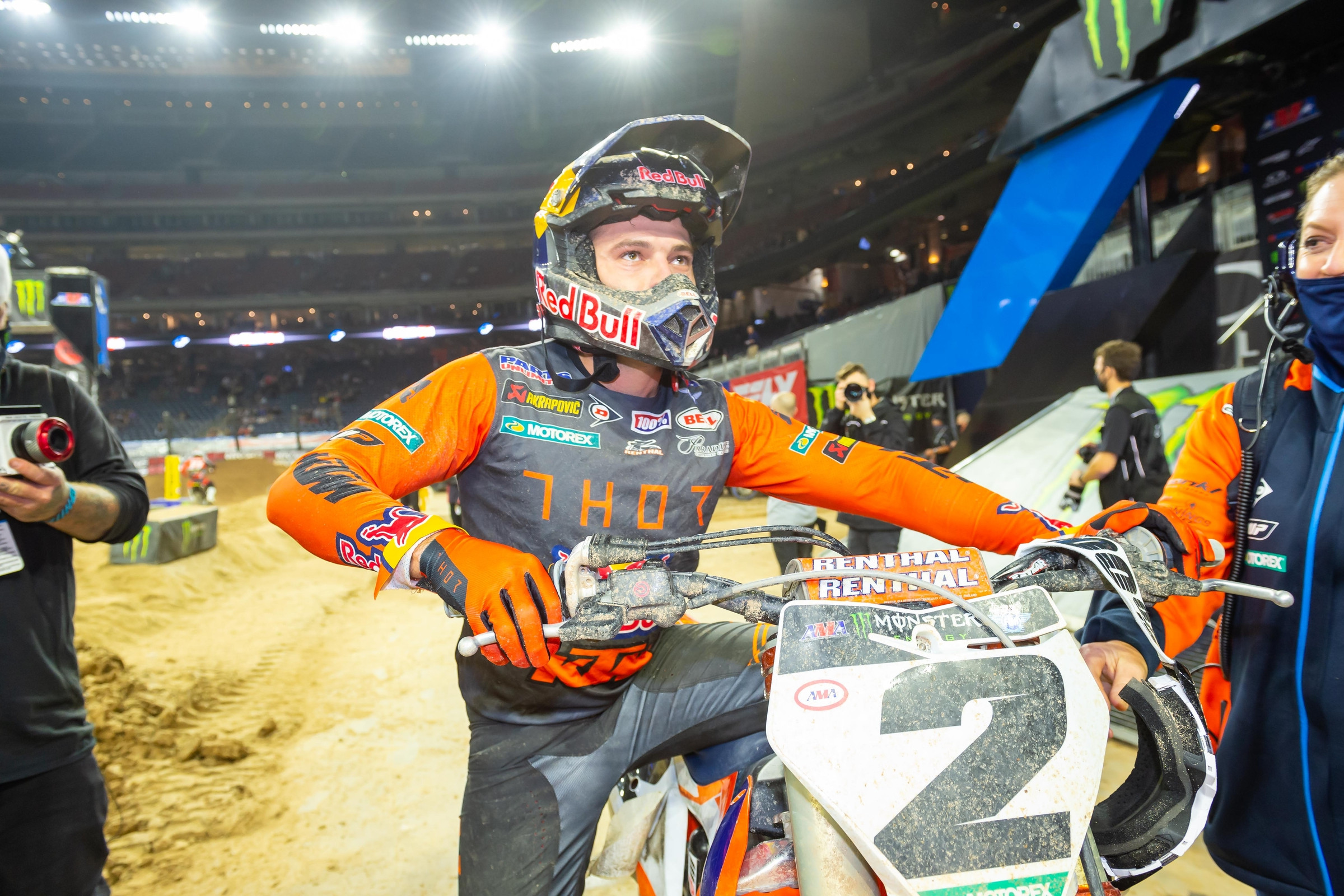 Cooper Webb has once again bounced back from a tough start to Monster Energy AMA Supercross to net his first race win of 2021. It took a rugged 20-minute-plus battle with Ken Roczen to get it, as he traded time with Roczen before putting in one last charge to get close again on the last lap. Then Roczen got held up by Dean Wilson, and Webb took advantage to get around and steal the lead and the win.

Webb talked about it with the media in a post-race press conference.

Racer X: Cooper Webb, halfway through the race you got close to Kenny. Kind of looked like you were trying to size him up and then the lappers came into play. You lost a lot of time. At that point, did you still feel like you had a run in you? What was going through your mind at that point?
Cooper Webb: Yeah, it obviously wasn’t ideal. We caught a pack and I just didn’t get through them. Obviously as we saw, it was tough tonight with lappers. I lost a lot. Just put my head down. I knew we were really close in times, so I knew it was going to be super hard. Just kept chipping away, chipping away. By the end we closed the gap a little. As time kind of ran out, I felt like I made a really good charge at the end. Tough for all of us [with the lappers] for sure tonight.

Talk about the struggle at these first couple rounds. It sounded like you were working on settings. Did I even hear maybe the back [injury] slowed you down a little bit in the off-season? What was the issue? Do you feel good now, or are you still a work in progress?
Yeah, we’re getting better obviously. It’s been a little bit of a struggle. It wasn’t the off-season that I was hoping for by any means. We have some new stuff on the bike this year. Race conditions are always different than the practice track. I think these first few rounds we’ve had a lot of traction, a lot more than I think any of us were anticipating. So, it’s been a little tough, but I got to give it to my Red Bull KTM team. We’ve been changing stuff basically every time we’re on the track, and tonight we made the right call. So I’m pumped on that. Now we have some time to ride. That’s the biggest thing we didn’t want to do, come here not dialed in and chase your tail while you’re trying to race. I’m stoked that from the first Saturday to this Saturday is massive gains. Looking to keep building with the long series still to come.

At this time last year you had a good finish at Anaheim 1 and then some struggles, and then you bounced back with that big win in San Diego. Was this a similar position this year where you finished off the podium in the first few races and then needed a win? If it went too much longer, was it going to get away from you?
Yeah, I think so. Reminds me a lot of ’19. First two rounds I was kind of off the radar and got the win at the third round. So it feels similar to that. It’s stacked, man. As you saw these first three rounds, it’s track position and starts. I think as we kind of go maybe to more series, they’ll kind of tweak around with the tracks and get them to where we can hopefully get some better racing in. We’re in a good spot. It’s still early. It’s going to be a lot of good and bad nights and you’ve just got to with what you’re dealt.

Coming up towards the end of the main, watching what’s happening in front of you, was there a plan? Or is it just take advantage of what happened around you?
There wasn’t much of a plan. Really until the last five I was still kind of chipping away. So I think it was more of I just kind of went for it. Found some lines and just tried to put some really good laps in at the end. I got close, but not really a plan, we were kind of doing the same lines and the same kind of thing, so I just wanted to get close. When you get close and with pressure and with the fans back into it, it can lead to mistakes. No real plan. Just get close, and when you get close I just tend to kind of play it out and see what needs to be done.

I want to step back to the heat race and just get your thoughts on the tabletop section where Barcia almost cleaned you out and see what you thought about that.
Yeah, it wasn’t very ideal. I just know how Bam Bam is and I saw him look and I’m like, “Please don’t do it,” and he did. But I took his red plate in the main so it all worked out.

In the final laps of the main you were sort of changing your line up into the whoops. You were skimming and then you were going to jumping. On the last lap you ducked up the inside and skimmed. Did you see a pass coming into that corner?
Yeah. I was kind of struggling skimming at the beginning of the day but there at the main I kind of had like a half-jump, half-skim that seemed to work pretty good. Then I just kind of knew that Ken had committed to that jumping line and I felt like if I could get a really good run skimming and close in that little bit, then maybe it would work. It seemed to be a good call.

Cooper, you said on the podium that you let the team take control of your setup for this round. What sort of setup did you end up with? Was it an old setup or a new setup? Can you just run us through that sort of change that you made there?
Obviously our [air] shock is a lot different now, not being on a spring one. So it’s a lot to learn about. Like I said, I didn’t spend much time at all in California. We’re all so close that when you’re comfortable on the bike it makes a huge difference. Just working with balance. There’s so much to try. Like I said, at the level we’re at, you’re looking for just that one percent of comfort or whatever it may be. We messed with forks, shocks, pull rods all day and just kind of came up with a combo that felt like it was going to be the best for the main event. Obviously I felt like they made the right decision. We’ll hopefully stick with that and get some laps in and keep building.

You mentioned that you were riding with air shock. Talk us through how much testing had you done with it, and what made you choose the air shock and what are the differences compared to the spring shock?
It’s quite a bit different. That’s for sure. Immediately I liked it a lot. It’s hard to explain without knowing the differences and feeling it. It just seems to be a lot plusher and more progressive, which I really enjoy. It’s just fine tuning it, though. It’s totally different. It’s all new. I think the KTM GP guys rode it at the end of the year for outdoors in GP’s, but that’s it. It’s all new from when Dunge [Ryan Dungey] rode it back in the day. We’re still working on it, we’re just trying to improve it as much as we can, but we feel like it’s still a better package than the spring. A lot different than traditional, but it seems to have some good qualities.